Anime seems to be on the lips of a number of Olympic figure skaters this year! Russian silver medalist, Evgenia Medvedeva, wowed fans in 2017 at the Tokyo Grand Prix with her SAILOR MOON inspired skating routine. She has repeatedly expressed her love for SAILOR MOON. In addition, Japanese skating pair, Miu Suzaki and Ryuichi Kihara, skated at Pyeongchang to Yuri Katsuki’s main theme from YURI!!! ON ICE.  And now gold medalist, Yuzuru Hanyu, has declared his love for TOKYO GHOUL. 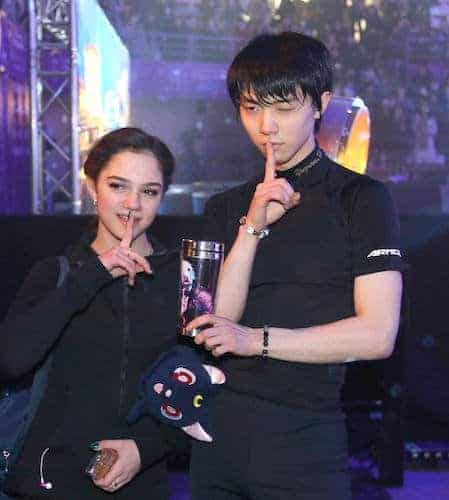 Yuzuru Hanyu and Evgenia Medvedeva pose with Luna from SAILOR MOON and a mug from TOKYO GHOUL | Image: Sponichi Annex

A Fated Meeting Between Yuzuru Hanyu and Ken Kaneki

He had first spoken to the voice actor of Ken Kaneki, the main character of TOKYO GHOUL, Natsuki Hanae, in an interview with A&G Tribal Radio on February 17th. In the interview, Hanae and Hanyu bonded over playing the same video game, VAINGLORY. 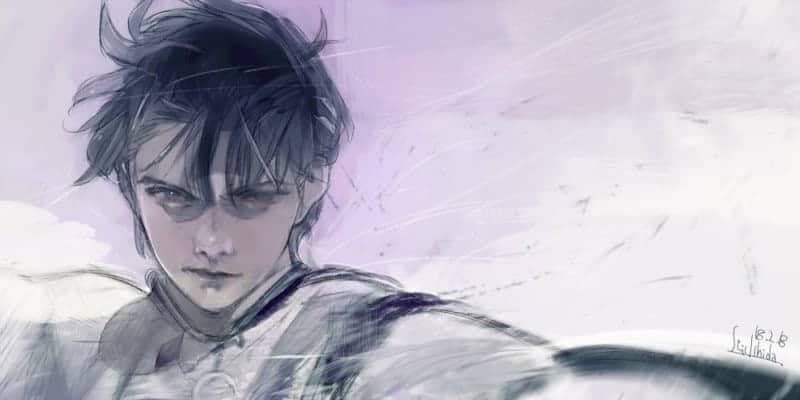 On the same day, the creator of TOKYO GHOUL, Sui Ishida, even tweeted a drawing of Yuzuru Hanyu posing dramatically. And, in another tweet, Hanae wondered if this wholesome interaction between himself and Hanyu were a dream, and tiredly stated that he’s working hard on the upcoming anime sequel, TOKYO GHOUL:RE.

On February 25th in a special interview from TV Tokyo, Hanyu talked this time to his favorite anime character, Ken Kaneki from TOKYO GHOUL. For those who are not familiar with TOKYO GHOUL, it is a popular seinen manga turned anime about a world ravaged by cannibalistic “ghouls” who look just like humans. The main character Ken Kaneki turns into a half-ghoul after receiving an organ transplant from ghoul Rize Kamishiro. As a result, he now must learn how to live as a ghoul and deal with his desires for flesh. 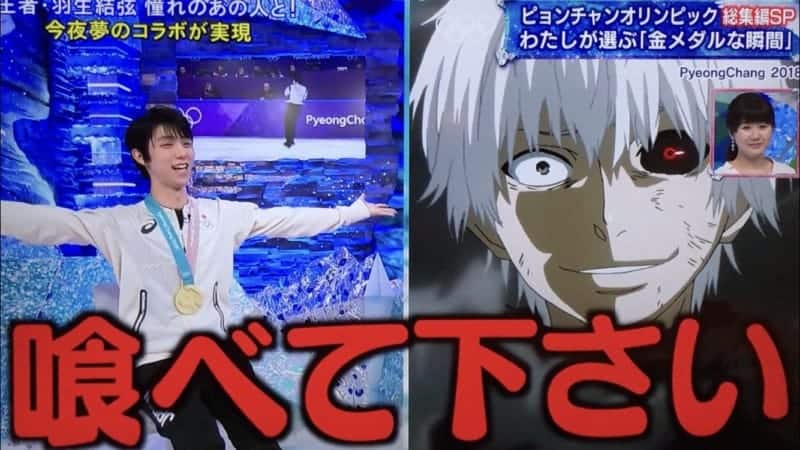 Hanae spent the entirety of this second interview acting as Ken Kaneki. He starts off with the cheerful tones of non-bloodthirsty Ken, telling Hanyu “congratulations on your Olympic success.” He follows this statement up with inviting Hanyu to “please come get a drink of delicious coffee with me!” Hanyu begins to crack. He clearly can’t handle the amazing absurdity of talking to his favorite anime character.

However, the final straw for Hanyu is when Ken tells him that he was also watching the Olympics and that it was a great fight! Hanyu can’t handle the situation. He cries, “I’m embarrassed… I’m so embarrassed…” On top of that, he gives Ken a little thanks and calls him “Kaneki-kun.” People add “kun” to the end of names in Japanese as an affectionate suffix.

Ken worries about Hanyu’s well-being and asks if it was difficult to remain strong despite suffering an injury. But, Hanyu is able to hold on and explains that it was because of all of the support that he received from other people that he overcame his difficulties.

But, the tone completely changes when Ken thanks Hanyu one more time, and says “Lastly…” He then transforms both in voice and appearance from normal Ken Kaneki into his white-haired, half-ghoul form. “Oh, he’s become white Kaneki.” Hanyu notes, showing off his love for the series.

The tone shifts completely and Ken offhandedly says, “Congrats again on the gold medal.” Hanyu thanks him very graciously and begins to bow to Ken. He is in awe of the half-ghoul before him.

Ken becomes self-indulgent and says that Hanyu moved him. He uses 感動 (kando) here, which refers to being emotionally moved. And, then, Ken finally pops the question. “It can’t be helped if you were eaten by me, right?”

Hanyu responds with complete joy, “Of course! Please eat me!” He spreads his arms out to welcome Ken Kaneki.

Skating Towards a Brighter Future for Anime?

Between Yuzuru Hanyu’s proclamation and all the other excitement made around anime and figure skaters, everyone is talking about anime! Perhaps, this change can help shed a more positive light on animation in general, since many people still believe that it’s only for children. However, after seeing our favorite athletes profess their love for anime, maybe people will begin to think about it differently. At least for now, we can appreciate Hanyu’s desire to be eaten by Ken Kaneki.