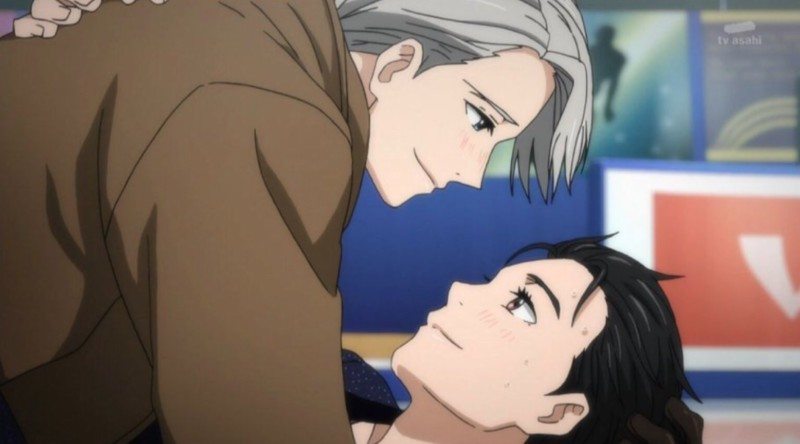 WARNING: THIS ARTICLE CONTAINS MAJOR SPOILERS FOR YURI!!! ON ICE

Representation of LGBT+ characters is always a struggle in media. As far as the world may have come in terms of equal rights, it still has a long way to go. At first glance, people might praise anime and manga for its abundance of LGBT+ media, but it is not all as altruistic as it might seem. When it comes to specifically gay representation, the first thing most people think of is “yaoi.”

The problem with gay representation in Japanese media

Let’s lay out the problems with this. First, yaoi is a highly sexualized genre that prioritizes gay sex for the female gaze. This is similar to the fetishization of lesbians in a lot of Western media. Generally, yaoi is written by women, for women. Gay men might appreciate some yaoi works, but gay media written by gay men for gay men is considered a distinctly different genre. Yaoi, ironically, conforms to heteronormative tropes of “seme” and “uke,” or “top” and “bottom.” One man is always dominant in sex, and the other is depicted as particularly effeminate and submissive.

In a nutshell, yaoi perpetuates the false association between gay couples and hypersexual behavior, as well as incorrect stereotypes that one person in the couple is consistently dominant and the other submissive. Rarely does yaoi craft a genuine representation of a healthy gay couple. The “shounen-ai” or “boys love” genre focuses more on the romantic relationship between the characters, however, it still doesn’t do justice for real gay couples. These stories almost never address the issue of discrimination against LGBT+ people in Japanese society or otherwise.

Same-sex marriage is not legal in Japan. Certain districts, like Shibuya, provide legal partnerships similar to civil unions. Still, LGBT+ Japanese citizens have no legal protection against discrimination for their sexual orientation. Furthermore, same-sex couples are not allowed to adopt children together. Yaoi manga and anime rarely, if ever, address these legitimate issues. Unfortunately, yaoi is overall a women’s fantasy that is far removed from the real issues that gay couples face.

So how does YURI!!! ON ICE measure up?

Now that season one of YURI!!! ON ICE has reached its thrilling conclusion, let’s take a look back at the show as a whole in terms of gay representation. For those who don’t know, YURI!!! ON ICE is a figure skating sports anime that focuses on the relationship between professional skaters Yuri Katsuki and Viktor Nikiforov. The show starts by featuring Yuri’s crushing defeat at his first Grand Prix Final. Following this defeat, and his subsequent loss at the Japanese Nationals, he goes back home to Hasetsu to reevaluate his professional goals.

READ: Are you a fan of PARASYTE? Check out Bella Sotomayor’s article on it here!

After reconnecting with his family and former ballet teacher, he goes to the local ice rink. There, he skates to his idol Viktor Nikiforov’s routine for his childhood friend Yuuko. Her kids end up posting the video online, which quickly goes viral, even catching the attention of said idol! In a matter of days, five-time gold medalist Viktor Nikiforov is at Yuri’s hot springs home, offering to be his coach.

There has been a lot of debate for and against the progressiveness of YURI!!! ON ICE. Some sing its praises as a step in the right direction since it pulls back from many of the hypersexual stereotypes of the yaoi genre. Others push forth a sober reminder that this anime does little for the advancement of LGBT+ rights in Japan, and actually falls under Japan’s hush-hush approach to the topic. Hopefully, this article will present a balanced understanding of the debate and help readers form their own conclusions.

The first reason people critique YURI!!! ON ICE is that Yuri and Viktor’s relationship is never explicitly stated. At face value, their relationship is that of coach and student. However, Viktor first shows up at Yuri’s house quite naked (granted, he is in the bath), and often asks if they should kiss or date, seemingly jokingly. This is what might make the anime seem like queer-baiting (teasing the audience with gay fanservice but no real relationship). On the other side of the argument, there seems to be enough subtext that strongly indicates a more intimate relationship than is explicitly stated. Anime like FREE!! IWATOBI SWIM CLUB or SOUND! EUPHONIUM are poster-child examples of homoerotic baiting.

Instead of depicting the serious development of relationships, these anime focus more strongly on the appearance of flirty or sultry shots. Conversely, YURI!!! ON ICE actually depicts a detailed progression of Yuri and Viktor’s relationship from fan and idol to student and coach to intimate partners. Yuri doesn’t jump at the chance to be with Viktor, and for most of the first third of the anime, he can’t believe Viktor would even stoop to teach a “failure” like him. Even so, Viktor is patient with Yuri and pushes him gently in the right direction of his dreams and goals.

Furthermore, while their relationship is not explicitly stated, it is very powerfully hinted at. In episode seven, at the Cup of China event, Yuri and Viktor get into an argument over Yuri’s insecurities and fears of disappointing himself, the audience, and most of all, Viktor. After skating an incredible performance and even attempting a late-program quadruple flip, Yuri proves his potential to the audience. When he runs back to Viktor, confidently saying, “I did great, right?” Viktor jumps out and kisses him, saying, “I couldn’t think of anything else to surprise you more than you surprised me.” Yuri then responds with a happy smile.

Of course, the kiss is “censored” by Viktor’s arm at the last moment. The last, almost blatant piece of romantic subtext comes in episode 10 while Yuri and Viktor are exploring Barcelona together. Viktor narrates the episode this time (whereas all the other episodes are narrated by Yuri). After a day out shopping together and slight bickering over a lost bag of nuts, Viktor watches as Yuri buys them matching gold rings. They then exchange the rings in front of a beautifully lit church.

Many characters wonder “what are the matching rings for?” and one character named Phichit, Yuri’s close friend, immediately assumes they both got married and congratulates them. Even though Yuri denies it, which is another point that people can critique the anime on, Viktor says that it’s an engagement ring and that they’ll get married if Yuri wins gold. Immediately, the characters take his claim seriously, reminded of the competition at hand. There was a small point of contention in the fandom since both characters wear their rings on the right hand, however, it is common practice in Russia to wear the wedding or engagement band on the right hand (Viktor is Russian if that wasn’t clear from his name).

Another point of critique may be the program that Viktor writes for Yuri. Yuri’s free skate program is based on the song “On Love: Eros,” focusing on sensual or sexual love. This might bring up the stereotype of the over-sexualization of gay people in yaoi. An argument against this is that Yuri’s whole program is not simply based on sexual love. His skating theme is “Love,” meaning the love that Yuri learned to have for himself, inspired by Viktor’s faith in him.

LOOK: Have you heard of HBO’s INSECURE? See how you feel about it after reading this!

Lastly, there is something to be said about the feminization of characters in this show. In order to skate his Eros routine, Yuri asks his former ballet teacher to instruct him on how to “move like a woman.” Instead of portraying male bravado, like Viktor did in his rendition of “On Love: Eros,” Yuri planned to portray a more sensual, feminine love (while keeping in mind the seductiveness of a pork cutlet bowl). Again, this might seem to be in line with stereotypical yaoi tropes.

A counterpoint is that the story mentions that one of Viktor’s previous programs was based on his androgynous looks. Viktor is not necessarily presented as the incredibly dominant or masculine partner to a submissive or effeminate Yuri. Both are shown to be talented skaters that attempt to break gender roles in their performances. Both also hold their own in their arguments and resolve their problems in a healthy manner, not in a winner-loser type situation.

READ: Have you been playing POKEMON SUN or MOON? Check out this confirmed fan theory here!

Overall, many of the points about stereotypical yaoi tropes can be contested in YURI!!! ON ICE. Since the anime itself is categorized as a sports anime, and not a yaoi, the characters are not hypersexualized or forced into strict roles. Yuri’s story is one of personal growth and development that ties into Viktor’s own realization that he had more to learn, as well. The one concrete point against the supposed progressiveness of YURI!!! ON ICE is its lack of commentary on discrimination of gay couples.

Viktor Nikiforov is a Russian-born and bred skater, but is never shown having any anxieties over the extremely homophobic situation of his home country and Yuri Katsuki has no issues with Japan’s lack of civil rights for its gay citizens. While Western fans may rejoice over a refreshing anime where a gay couple doesn’t have to deal with the tiresome daily discrimination, Japanese fans are tired of their political concerns being censored and silenced in media.

Maybe YURI!!! ON ICE won’t be the anime to seriously address this, but that doesn’t mean there won’t be more that will. This anime is a good move away from the standard yaoi stereotypes and provides a refreshing story of growth between two people. While the criticisms against it stand, it is still something that can be enjoyed.