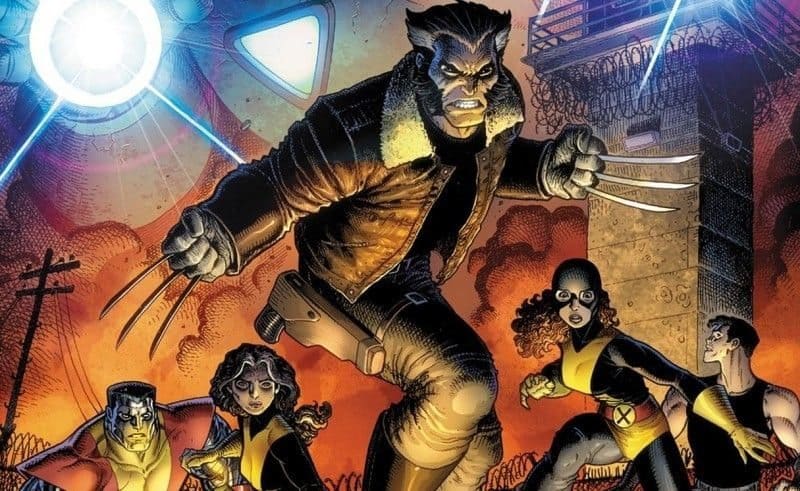 A revolution begins in the last mutant internment camp! A traitor amongst the remaining mutants and his horrible plan are revealed. And it all comes down to a battle of brother versus sister…

YEARS OF FUTURE PAST #4 by Marguerite Bennet and Mike Norton

YEARS OF FUTURE PAST #3 was an issue of revelations and setup, but #4 is definitely an issue of huge plot twists! While Christina and her brother spark a revolution in the last mutant internment camp, the few remaining mutants sally to rescue the siblings. As they arrive at the camp and start freeing its prisoners, preparing to execute their plan to let Christina save Kelly, a traitor in the midst of the X-Men is revealed and we find out what extremely cruel thing he’s been planning all along… and Cameron’s reaction to that revelation will cause him to come into conflict with his own sister… 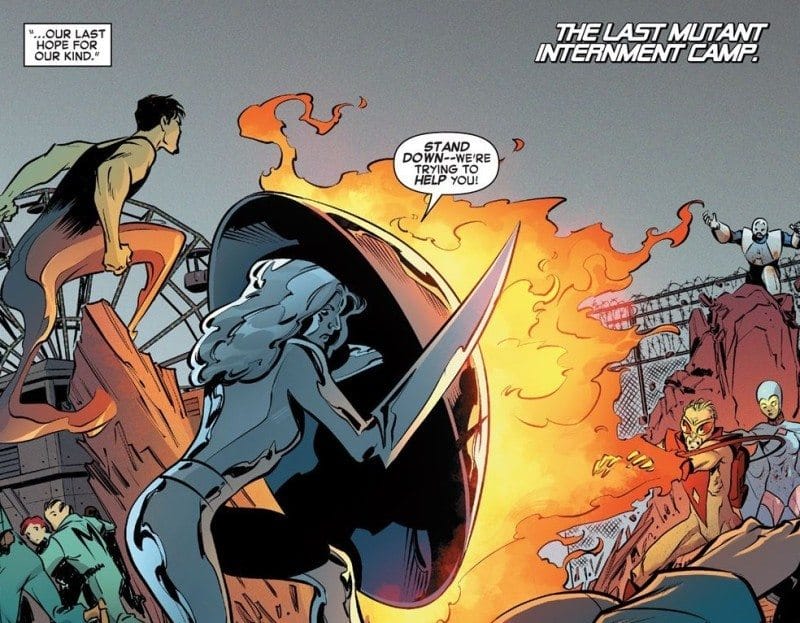 I won’t have to talk too much about the art in this review. It has been appropriate in the issues before, and it definitely still is. Even though I must admit that some of the facial expressions or some of the panels in general looked increasingly sloppy in this issue (which might be due to time pressure), overall, what Norton delivers is still really enjoyable.

First off, it can be said that in this issue, the series is finally moving towards its big finale. It’s really fast paced, with a lot of revelations and plot twists happening at once. This has already been the case in the last issue, and I feel like this is one of those books where an author just wants to have as many plot twists as possible in the limited time he has to tell a story. Which causes our characters to be faced with a totally different situation by the end of each issue, and the reader has to keep a lot of information in mind to follow the story. Admittedly, I had to think really hard of what happened in the last issue while writing this review. The plot is just too knotty, not really straightforward. Which can be enjoyable, but also demanding. Still, it’s surprising and well executed, and I found myself thrilled by the end of the issue.

Ironically, the character development in this issue was one of the most believable thus far in the series. Even though it’s hard/ almost impossible for me to believe that – spoiler – Rachel cooperated with the traitor and knew about his plans all along. I love how Cameron addresses how the characters felt like their dystopian life was an adventure, but in the end, it was just misery. The way he thinks is believable if you keep in mind the way he grew up. The fact that this series seemed to be too light-hearted for a book about a dystopian scenario had always been my biggest point of criticism about the book. However, the author seems to be aware of this, since it’s thematized by the characters! The Cameron monologue really makes the scenario more believable and… dark. This book finally seems to get this right.

And it’s able to create a lot more tension this way. Generally speaking, this issue was way more gripping than the other issues were, especially because, with the traitor, the darker tone and less jokes than in the previous issues, it felt like the stakes were higher for the main characters.

Something that bugged be little, though, is that the spark of adolescent rebellion against the grown-ups and the decisions they made for her is no longer thematized with the Christina we have in issue #4. Instead, she’s ready to serve as their chess figure in a game of PR in order to save her own people, and her brother gets to be the one to question their roles in this conflict. It would have been great to see the themes from #3 continued in this issue, but I think this is just due to the fact that the book is overstuffed with plot. It’s even hard to keep track of how the character is developing. As for the traitor, though, it’s totally understandable to the reader that this character would act exactly like this in this situation. And the conflict between the characters in the end of the issue doesn’t seem forced or unnatural, but instead seems like these people’s logical reaction.

READ TOM’S REVIEW OF YEARS OF FUTURE PAST #3!

Another thing that I just can’t help but notice is that, with each issue of the series I read, it becomes more and more similar to the HUNGER GAMES book series. Think about it. A world that’s horrible for most of its inhabitants, a war taking place while the real war is about PR, a young girl growing up that feels insecure about her emotions, a group of people that want to stage her as a symbol in order to reach their political goals, and the girl keeps on being manipulated, having to fear that the people she loves might be killed if she doesn’t play a certain role… the parallels are there, one of the reasons why this comic overall feels like a young adult movie.

Ultimately, YEARS OF FUTURE PAST #4 is overstuffed with plot, but has interesting twists. It reminds me of HUNGER GAMES, but I like that. It’s the beginning of the big finale, and it’s thrilling. And it finally gets way darker.

DON’T FORGET TO CHECK OUT MORE ARTICLES BY MARIUS!