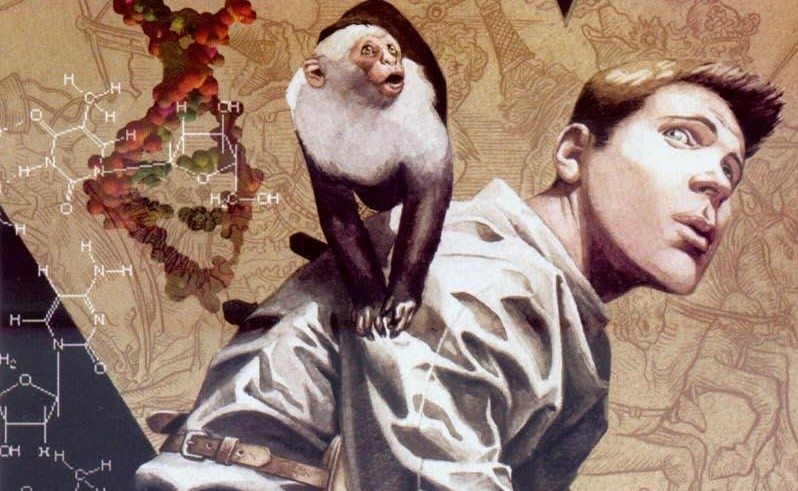 After several script revisions and production mishaps, the plans for a Y: THE LAST MAN movie were not settled in the past. In October 2015, it was reported that an FX TV show was in  development for the series and the latest buzz reveals that the series has now found its showrunner: Michael Green. Although much of the TV adaptation is still unknown, fans of the comic series should be excited about the latest news and unfamiliar viewers should read the series and find out why it receives such heavy praise.

Y: THE LAST MAN is a beloved and Eisner Award-winning comic series from writer Brian K. Vaughan (SAGA, EX-MACHINA, RUNAWAYS) and artist Pia Guerra published by Vertigo in 2002. The story follows the journey of Yorick Brown, an amateur escape artist who endures the pangs of a long distance relationship and finds the meaning of adulthood. Yorick’s unexamined life takes a turn when a mysterious plague kills all living mammals with a Y chromosome, leaving only Yorick and his male capuchin monkey, Ampersand, alive in a world with only women. Yorick embarks on a journey, alongside Ampersand, to find his girlfriend amidst the dystopian atmosphere. However, he gets sidetracked into finding the cause of the plague, uncovering why only he and his male pet survived, and to ultimately restoring men to an unmanned world. Yorick is also joined by two female leads: Dr. Mann, a gifted geneticist, and Agent 355, a kick-ass agent of a secret government cult. They both brave the journey and protect Yorick and Ampersand from the hands of pissed off feminist groups, a foreign army, and a ninja. 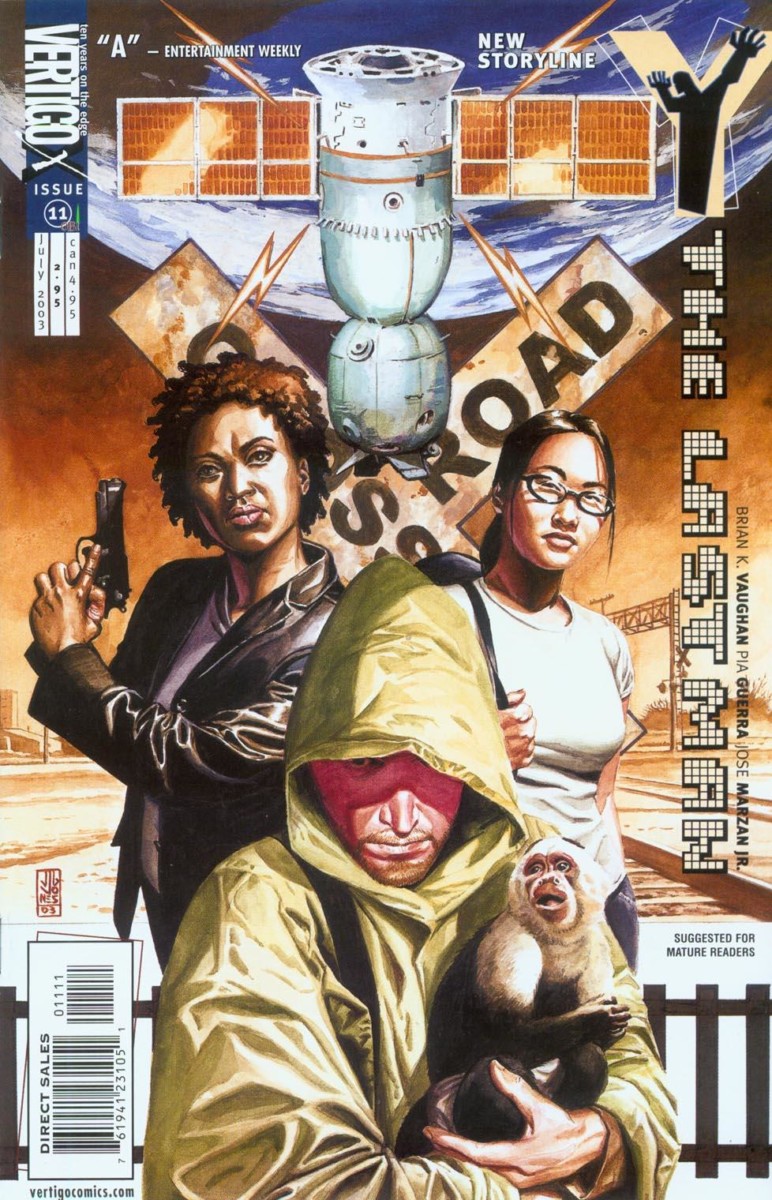 LISTEN: Hear why we are thankful for Y: THE LAST MAN.

Y: THE LAST MAN is an essential read amongst popular graphic novels. The plot is emotionally and poetically conveyed through Vaughan’s words and Guerra’s beautifully depicted art. Not only does the story grab you with its mystery of the man-killing plague, it gives birth to a lovable, relatable protagonist who grows throughout the issues. Yorick is the only male human survivor in a sea full of women, which sounds like the ultimate guy fantasy, but this only leaves Yorick in deep gloom and despair as more questions arise than answers. The female leads in the series also leave a strong impression and feel very real. They are treated as more than just side characters for they have their own struggles and development as the story progresses. The plot also touches the complexities of identity, gender issues, and the fight for a brighter future for human kind. The superb story and characters are all present; now the challenges lie in bringing the series’s awe to the screens.

Although the comic series isn’t getting its own movie, a TV show for the adaptation is much more suitable. The unmanned world of Y: THE LAST MAN is massive. From characters to settings, a movie adaptation simply cannot capture the full journey of the comic series without the unnecessary editing of key plot points. An example would be Zack Snyder’s adaptation of WATCHMEN. The director does a fair job of capturing some of the most memorable panels of Alan Moore’s graphic masterpiece, yet the three hour movie falls short of diving deep into the novel’s characters and its complete atmosphere. Perhaps WATCHMEN or even the recent case of Neil Gaiman’s SANDMAN, where even the script supervisor agrees the material is better suited for a serial iteration, are too massive of epics to explore in one movie. Perhaps those graphic novels can also find solace in proper TV series adaptations, so we can further discuss and analyze every episode for seasons to come.

Fans of the series should also rejoice as Brian K. Vaughn will be co-writing the upcoming series with Michael Green. Vaughan is no stranger to TV, as he was one of the producers and writers for LOST. It always feels like a safety net when a beloved writer of the source material works hand in hand with Hollywood to bring together a whole different kind of experience beyond the panels for both fans and new audiences. 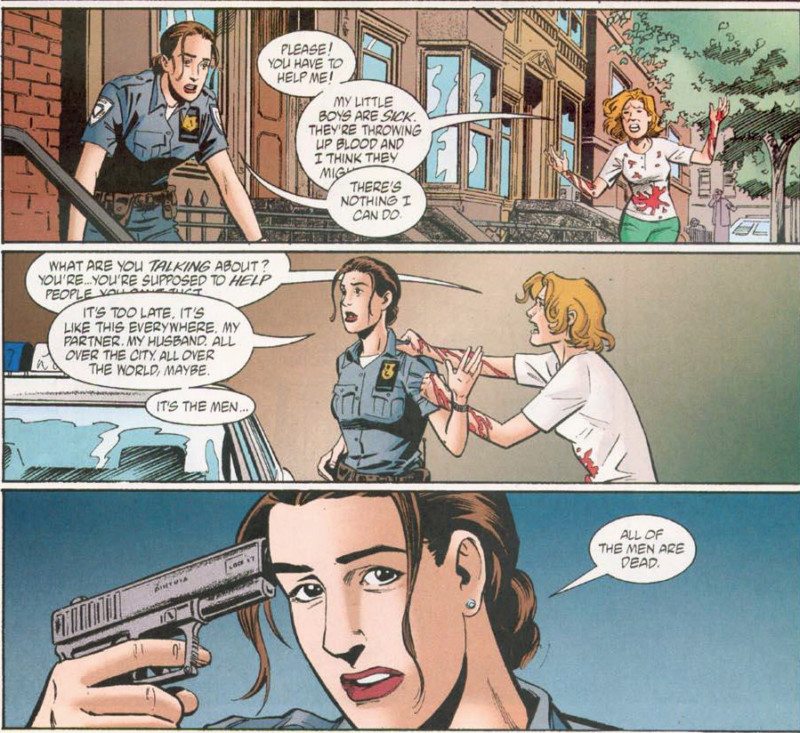 Due to the mature nature of Y: THE LAST MAN, you would expect the show to be fully explored and uncensored. The panels of Y: THE LAST MAN are covered in blood, violence, death, love, and loss. Seems like a proper home would be HBO or SHOWTIME, but FX is a good candidate nonetheless. FX has produced some of the most recent acclaimed TV series such as FARGO, LOUIE, and ATLANTA. These shows dive deep into mature content, yet FX portrays it well. The upcoming LEGION, an X-MEN spinoff show, also debuts on FX, so it seems comic book adaptations can continue to find a home in TV networks to provide an entertaining and addictive experience for viewers.

A long awaited adaptation for a series that finally found its showrunner can still fall into production mishaps and delays. But the concern about the latest news is the showrunner himself, Michael Green. Green’s previous work includes writing and producing for some fan-favorite series including SMALLVILLE and the short-lived HEROES. Unfortunately, he also wrote the screenplay for 2011’s adaptation of GREEN LANTERN. It’s universally accepted, at least by Rotten Tomato standards, that fans were scarred from that awful adaptation of a beloved superhero covered in a CGI costume for the big screen. The plot was generic, the characters were written poorly, and a cloud-based villain was thrown into the mix, which is never a good idea.

Yet Michael Green also helms the screenplays for the upcoming LOGAN, ALIEN: COVENANT and BLADE RUNNER sequel. He’s given a lot of responsibility, which comes with a lot of pressure to satisfy fans and audiences of these treasured movie titles. A more recent work of Green’s to debut next year is the TV series adaptation of Neil Gaiman’s AMERICAN GODS, another fan-favorite author’s work. So we can only wait and determine whether Green is able to deliver on these adaptations and solidify his position. If these listed titles do poorly script-wise, then a Y: THE LAST MAN TV series could fall victim to mediocrity and face more production delays or cancellation. It’s too early to measure Green’s capabilities, but we can’t afford anymore disappointing news regarding the show’s status. 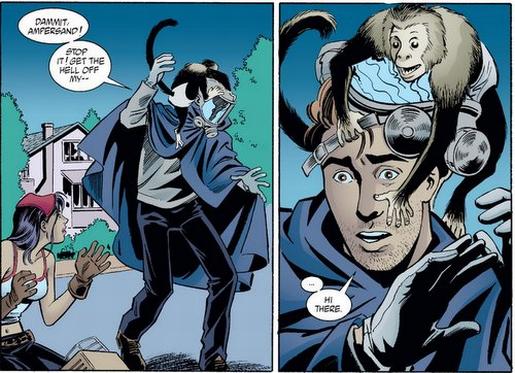 READ: Want more of BKV? Read why SAGA is so special to us!

With so many live comic book super-hero adaptations on the rise, people already speak of super hero fatigue. But if Y: THE LAST MAN has a successful run, it could open the doors to more adaptations of beloved comic book series that don’t involve the superhero genre. What reader wouldn’t love to see screen adaptations of SAGA, SOUTHERN BASTARDS, or AMERICAN VAMPIRE joining the ranks of THE WALKING DEAD TV series? TV shows and films still sorely lack strong female leads and original scripts, and they constantly dig through reels of nostalgia for sequels, prequels, and reboots. This is where graphic novels are suited as fantastic source materials and can exemplify new worlds with rich stories and characters. Y: THE LAST MAN can help justify the notion of comic books comprising more than just capes, superpowers, or zombie apocalypses. Graphic novels can also be a deep exploration of characters, themes, and what the overall arc can convey about the world. More than zombies or a dystopian future, the success of a Y: THE LAST MAN TV series can open the panels for other forgotten essential graphic stories to be shared through the screen.

So if you’re a fan of Y: THE LAST MAN, you should continue to celebrate and show support for its adaptation buzz. The good outweighs the bad, for now. And if you’ve never read the series, please go pick it up. It will give you a reason to fall in love with the comic book medium. Now let us wait for more news on the TV series and hope a proper adaptation is coming for our solely beloved man and his monkey.