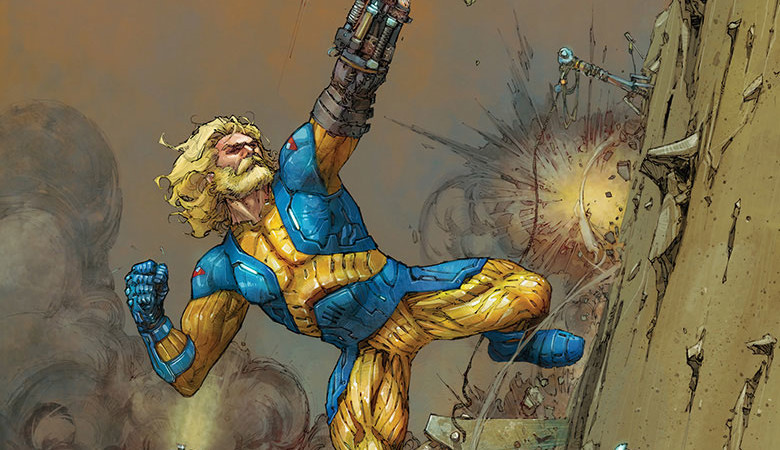 You are forced into a dangerous, unwinnable battle. You have the ultimate weapon up your sleeve and could end the fight before it begins… but you are petrified to use it.

This is the thrust of the conflict in X-O MANOWAR #2. In the follow-up to the phenomenal first issue, writer Matt Kindt and artist Tomas Giorello have upped the ante. This team layers the action-packed story with more emotional conflict. The love-hate relationship between Aric and the X-O Manowar suit is front and center in this powerful issue.

X-O MANOWAR #2 is Suicide Squad set in the Guardians of the Galaxy universe. The former superhero Aric is provided a team of dispensable warriors and an impossible mission. His alien captors send him to infiltrate an enemy base, despite knowing that Aric and his squad will likely die immediately upon entry. Aric changes the plan last minute. It is a desperate attempt to give him and his team an iota more of a chance. What follows is a violent raid on the base. 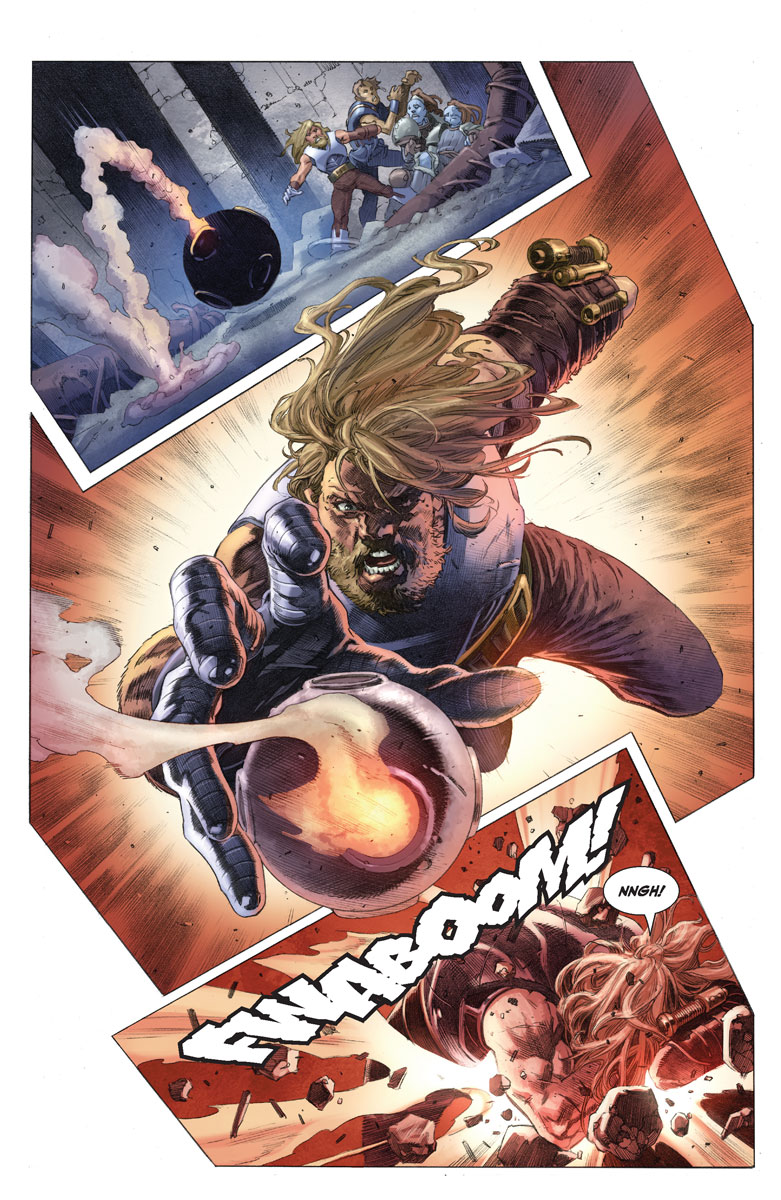 Kindt expertly weaves Aric’s strained relationship with the sentient alien armor throughout the issue. Aric is a broken man in every sense of the word. He is enslaved, loses his arm, and risks losing his new wife and farm. Aric has run away from Earth because the X-O Manowar armor ruined his life. What was formerly his poison is now his cure. Aric wrestles with using the all-powerful armor, which could easily save him and his new teammates. However, Kindt not-so-subtly hints that the suit is a malevolent force, willing to do anything to drag Aric back to the violent life he desperately wishes to leave behind.

X-O MANOWAR #2 succeeds because Kindt is able to turn the tension up to 100. Aric has his back against the wall throughout the issue and must exercise unimaginable willpower. The character has always been an anti-hero, and this issue perfectly epitomizes his struggle between selfishness and selflessness. I will not spoil the issue, but Aric’s eventual decision is a thought-provoking insight into his character. Is it the armor that is truly pulling Aric back, or does he secretly thirst for his formerly savage life?

The newly introduced team is a perfect foil for Aric, despite essentially being sympathetic canon fodder. They are all pseudo-competent warriors drafted in the same manner as Aric, yet even without the armor, he is ten times the warrior. As opposed to his teammates, Aric is thriving in every battle he faces. 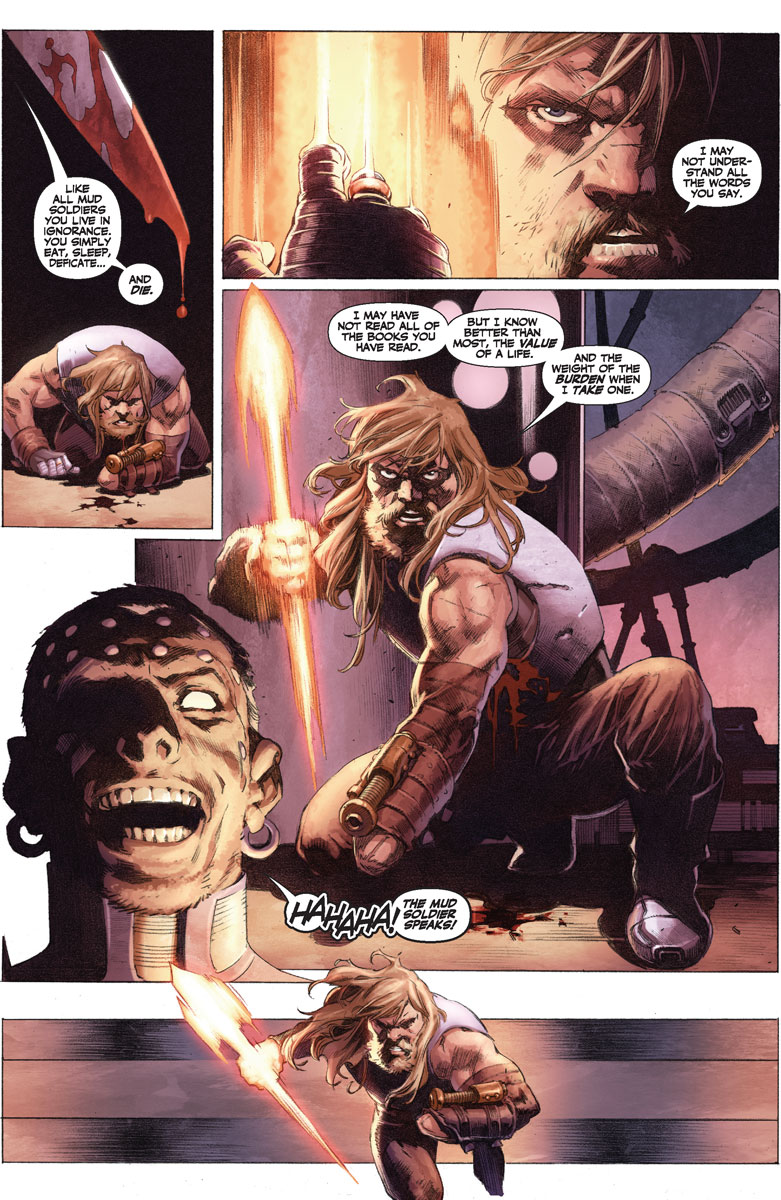 Giorello’s art is an incredible combination of classic high-fantasy savagery and sci-fi settings. The action scenes are violent and dynamic.  Aric’s barbarianism is perfectly translated through his posture and body language. Apart from his physical differences, Aric moves differently than his alien counterparts. Giorello knows how to frame the violence to make Aric stand out. The hero stampedes through his enemies and clenches in Jack Kirby-style heroic stances.

The combination of cool pastels, an etched style, and elaborate layouts makes every page of this comic seem like a Renaissance painting. Giorello’s swirling skies and complex buildings are mystical and menacing. Like Blade Runner, this sci-fi world is dirty and lived-in yet bright and lively. 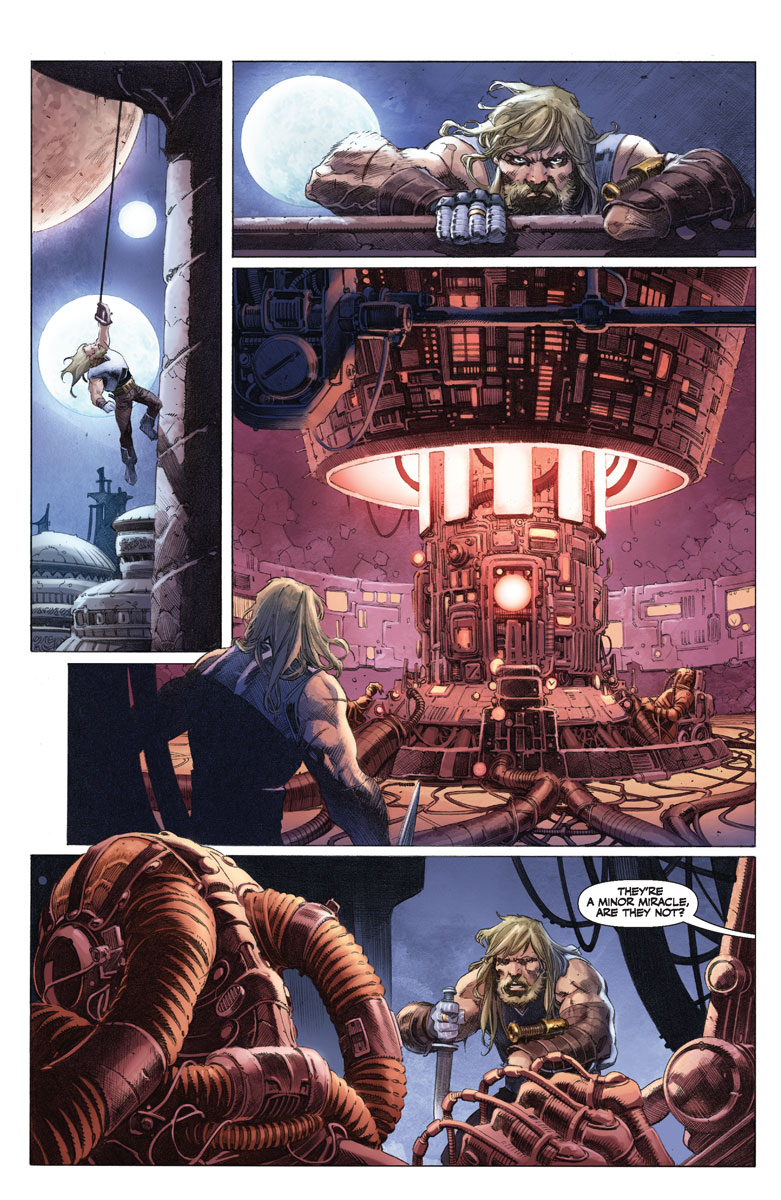 X-O MANOWAR #2 is brutal in its violence and emotional manipulation of Aric. The series continues to surprise and push this character to his limits. The fact that the actual X-O Manowar suit has only played a fleeting role is a testament to the strength of the writing and characterization.