The Gold team never gets a break. It seems like in every issue, a villain from the past comes back to haunt them — and every time, the villain becomes a little stronger and a little smarter. That’s certainly the case for writer Marc Guggenheim and artists Paulo Siqueira, Jose Luis, and Arif Prianto’s X-MEN GOLD #25.

In the final part of the “Cruel and Unusual” arc, Scythian returns from the Negative Zone and, like all gods who are beaten by tiny humans, he’s angry. It’s up to the original Gold team, led by Kitty Pryde, and the “new” Gold team, led by Magik, to defeat the alien giant and save the Earth from destruction. 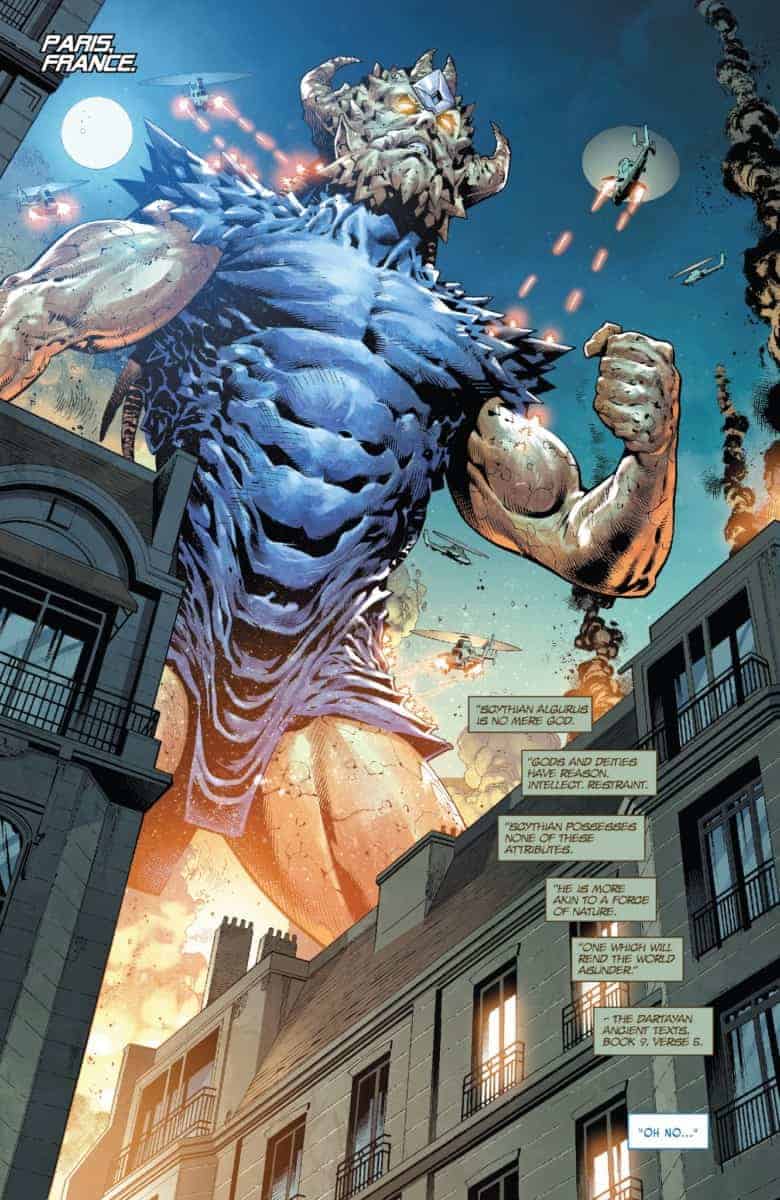 Just When You Think He’s Gone…

X-MEN GOLD #25 opens with a beautifully rendered panel of — you guessed it — the mindless Scythian from the “Negative Zone War” arc. The X-Men defeated him a couple of issues ago but now he’s back and even angrier than he was before. Luckily, the X-Men have it under control. For the most part.

Magik and Storm are able to bust the imprisoned X-Men out of their cells, with the threat of total annihilation aiding their argument with the warden. The “new” Gold team and the original Gold team join together, along with Captain Britain and his wife Meggan.

Rogue tries to use her power absorption ability on Scythian, but the plan backfires when the god’s powers overwhelm her, rendering her unconscious. With one of the team’s strongest players out of the game, the odds appear more and more hopeless. That is until Storm magically summons Stormcaster and becomes Windrider again!

The Stormcaster, Magik’s huge stepping disc, and Kitty’s sacrifice of the X-Jet defeat Scythian in the end. But little do the X-Men know that the real battle is just beginning. Back in New York, the long-term enemy of the Gold team Lydia Nance teams up with the mutated Sentinel AI from X-MEN GOLD #4-6. According to the AI, Colossus is the key to killing every mutant on Earth.

X-MEN GOLD #25 includes the biggest cast of characters we’ve seen so far in the series. Often times, an issue with so many characters becomes confusing, since authors frequently want to give every character a few spotlight panels. This means the issue becomes clogged with too many smaller narratives and loses sight of the larger plotline. At the moment, X-MEN BLUE is a victim of this phenomenon. Thankfully, X-MEN GOLD #25 avoids it. 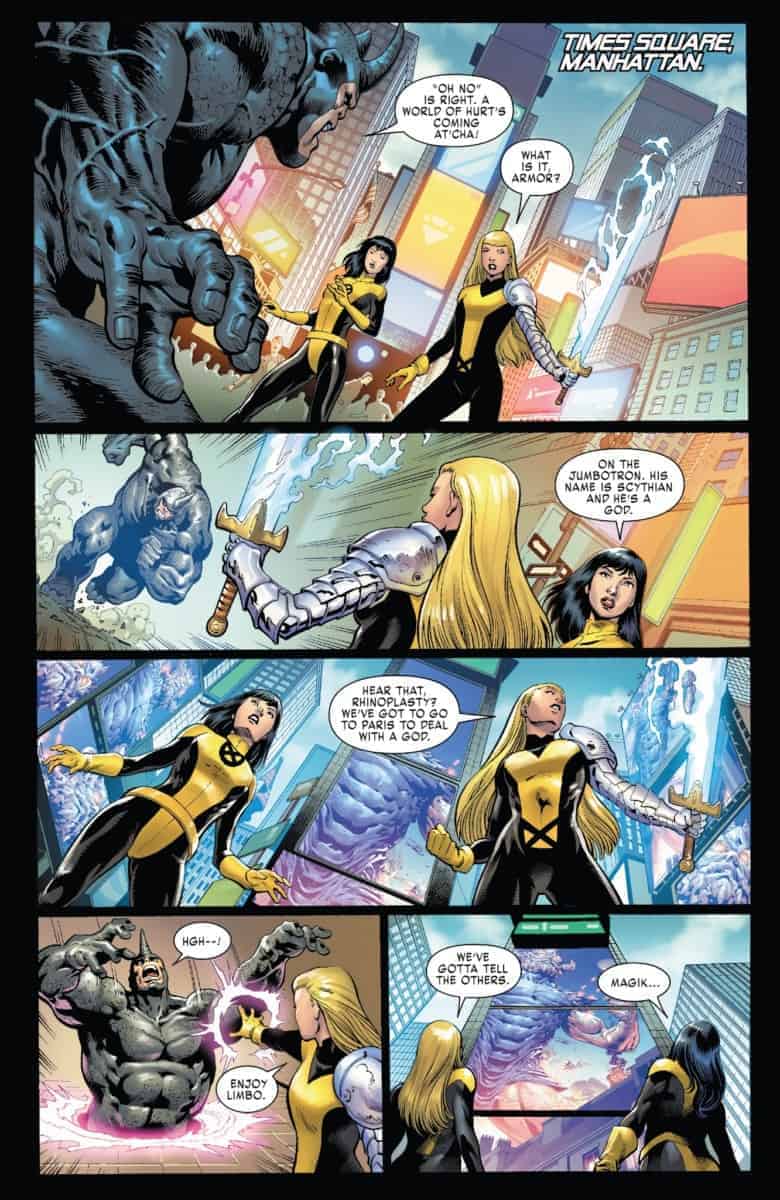 While there are a lot of characters, all of them are after the same goal: defeating Scythian. Without subplots interfering, a huge cast of characters can still function well in an issue. It also helps that the settings are consistent. There are only two places in this issue: Paris and New York. Since there isn’t a lot of jumping around from place to place, the issue flows smoothly.

Goddess Storm to the Rescue in X-MEN GOLD #25

While I definitely didn’t see it coming, I was still happily surprised to see the Goddess of Thunder’s first appearance since 2011. Way back in the UNCANNY X-MEN Annual from 1985, Loki gave Storm the Stormcaster, granting her similar powers as Thor and transforming her into the Goddess of Thunder.

After Storm realized that Loki was using the magical hammer to control Storm, she abandoned it. Since then, it’s made some reappearances in X-MEN: SERVE AND PROTECT but it hasn’t been a huge part of Storm’s character. The only thing its really shown in terms of character development is Storm’s incapability of handling Loki’s manipulative powers.

But now it’s back and (it seems) better than ever. Storm hasn’t bee a huge part of X-MEN GOLD (since Kitty is usually the star of every issue) so it’s great to see Guggenheim giving her a stronger presence. While I hope to see more of the Stormcaster in general, I also hope to see a Storm who is capable of handling the hammer’s immense power. If she’s able to overcome the struggles of her past and master her abilities as the Goddess of Thunder, I’ll be a happy reader. 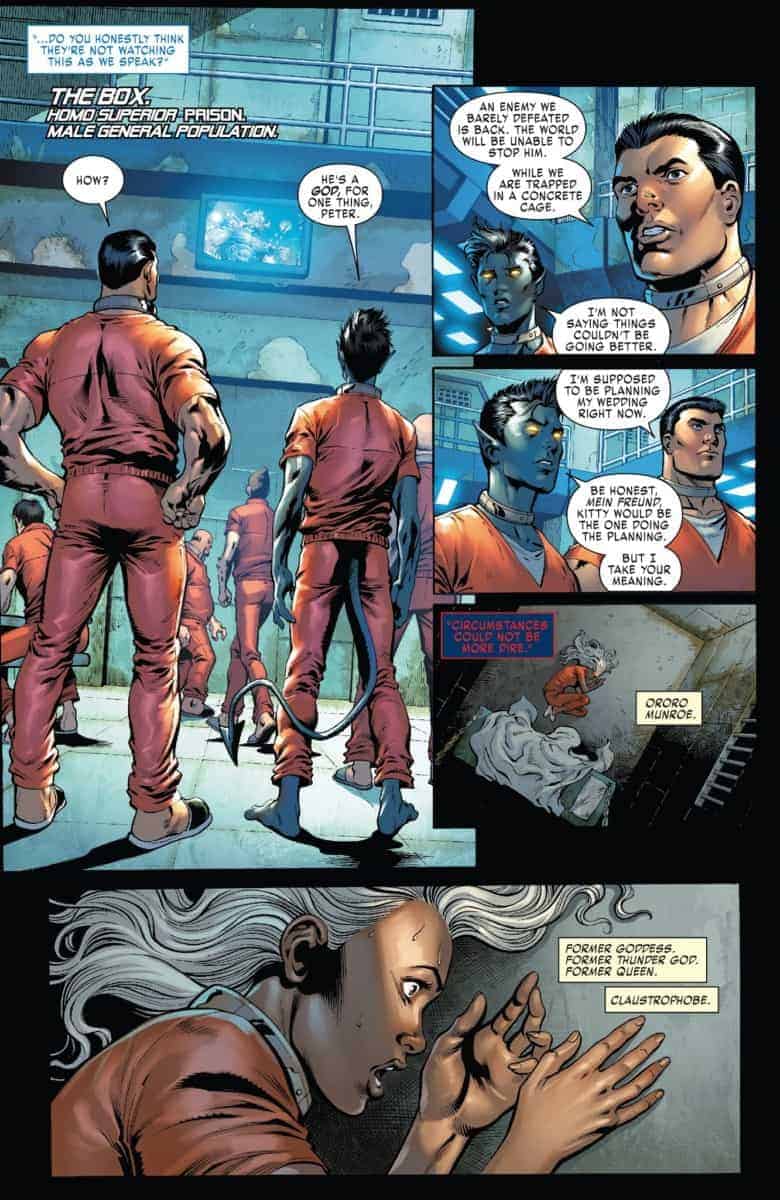 X-MEN GOLD #25 brings another change in artists, going from Thony Silas in issue #24 to Paulo Siqueira and Jose Luis in #25. Honestly, X-MEN GOLD has had so many artists that I’m starting to lose count. Sometimes constantly changing artists can be a positive thing for a series, as in the SCARLET WITCH series. With that series, the line-up of artists reflects the constantly changing plot.

But for X-MEN GOLD, different artists just make the series feel disjointed. Paulo Siqueira and Jose Luis are talented artists and do a good job of illustrating an intense battle scene. They draw Scythian particularly well, with the hulking behemoth looking as frightening and unstoppable as he’s said to be. Still, their styles are so different than Thony Silas that it hardly feels like I’m reading the same series.

With the X-Men Lost in Space, Polaris is Forced to Lead the Team in X-MEN BLUE #23

The weakest part of this issue is, unfortunately, the coloring. Colorist Arif Prianto has been a member of the X-MEN GOLD creative team for a while. His style of coloring brings some consistency to the series, but that isn’t necessarily a good thing. His colors are frequently too saturated and colorful, making scenes appear unnatural.

He also struggles to make skin tones realistic, as seen in Rogue and Storm’s individual panels. Rogue’s skin is a strange shade of pink and Storm sometimes has too strong of purple undertones in her skin. I think sometimes people don’t recognize it, but coloring can really make or break an issue. Unfortunately for X-MEN GOLD #25, it breaks it.

With Colossus and Kitty’s marriage on the horizon, I assumed Guggenheim would end the “Cruel and Unusual” arc on a soft note…but that’s the opposite of what he did! X-MEN GOLD #25 is a solid issue, packed full of action scenes, new characters, and mind-blowing powers.

I would definitely say out of the past five X-MEN GOLD issues, this is one of the stronger ones. The art struggles to keep up with the well-written story but I have hope that the eagerly awaited “Till Death Do Us Part” arc (coming in X-MEN GOLD #26) will help solidify an artistic style. Overall, I think the series is headed in a good direction and I can’t wait to see what comes next.