(This article is a response to another post recently published on TheMarySue.)

The mutant race is close to total extinction. Once again. No new mutants are being born. Once again. And a powerful leader will have to unite all of them to get them to a safe haven. Once again. And with yet another annihilation plot being established in Jeff Lemire’s EXTRAORDINARY X-MEN #1, fans of the franchise start feeling like Marvel’s weird focus on almost letting mutantkind go extinct is preventing the X-Men comics from being able to address recent social issues – something the franchise has always done, and something the franchise is perfectly suited for. But have the comic books about the misfits of the Marvel Universe really stopped thematizing these topics?

READ: Why the X-Men should give extinction a break!

First off, I agree with ­­one of the points of criticism: the annihilation plot is not only replaceable, but repetitive and redundant. It’s been there before, and the focus yet on another threat that will wipe out the X-Gene once and for all is indeed an odd editorial choice by Marvel. Many fans are getting tired of the concept, arguing that the company should give mutants a break already.

I also agree on the statement that the franchise is full of potential for real life analogies concerning discrimination. One of my favorite X-Men stories ever, GOD LOVES, MAN KILLS, is about religious fanaticism and how a belief can be instrumentalized to create hatred against a particular group of people, and it’s so close to real life it physically hurts. The franchise should definitely have more of that, especially when other books like ACTION COMICS feature one-on-one Ferguson analogies, something I always figured would be perfect for the X-Men comics. 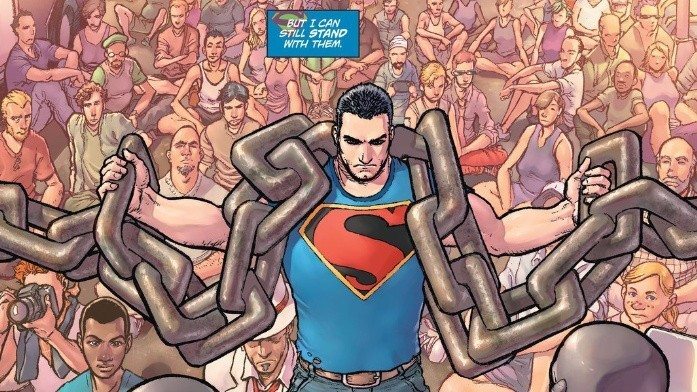 So I acknowledge this point of criticism: the X-Men should try to lower the stakes and be more specific and up to date when it comes to addressing racism, xenophobia etc… But, then again, it could be quite possible that the annihilation aspect is only a tiny amount of what Jeff Lemire is planning to do during his run on the X-Men flagship title. In an interview with CBR, the author stated:

Also, I would advise not to jump to too many conclusions based on a four-page preview. The things discussed and revealed in that preview are only one scene from one issue of a much larger story. The Terrigen story is more complicated and layered than only the “sterilization” aspect, and part of a larger plan.

The first two EXTRAORDINARY issues might give us a pretty good idea as to what he’s referring to, really. There might be a pretty important and direct analogy to a social issue taking place in large parts of the world right now – I’m talking about the M-Pox.

Let’s take a closer look at this scene, in which an alleged mutant is being beaten up for probably being infected with a disease. 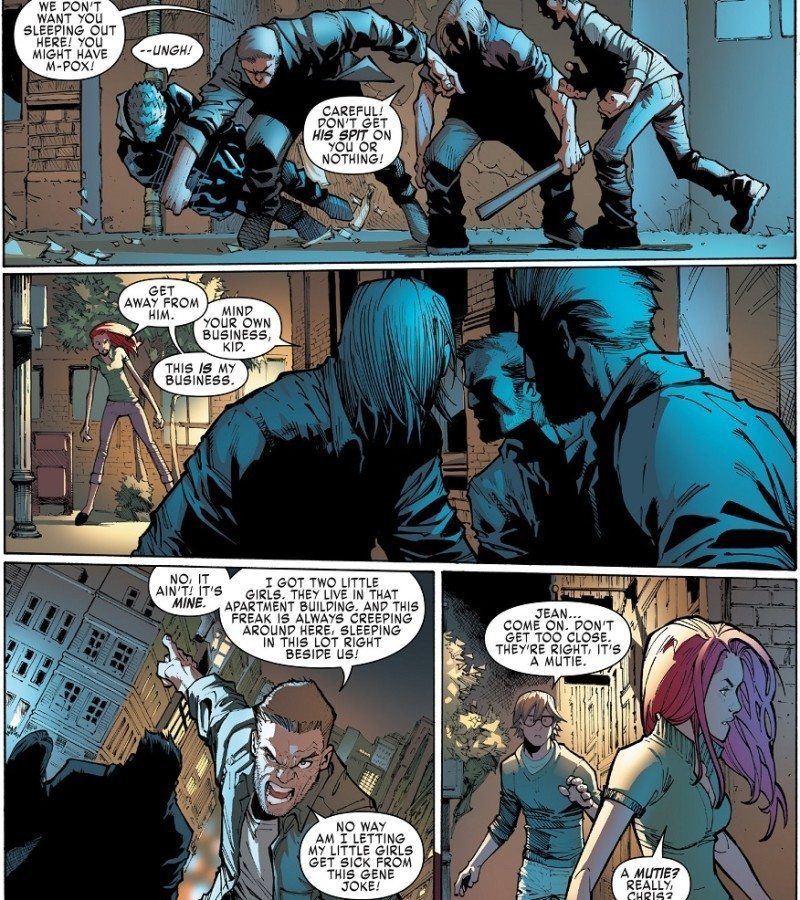 Isn’t this pretty similar to a common prejudice against asylum seekers in the real world? They are being discriminated against for potentially being infected with illnesses. Keep in mind that since what happened with the Terrigen Mists, almost every mutant had to leave his or her home, longing for the safety of X-Haven – they are all refugees. With hatred against refugees rising in western states and countries refusing to help people who had to leave their home, their former life, and their family to survive, the asylum thematic is, in fact, a vital social issue being addressed.

CHECK OUT: Our review of EXTRAORDINARY X-MEN #2!

Issue #1 of the same book features a scene in which the Indian military has started an open hunt on mutants. 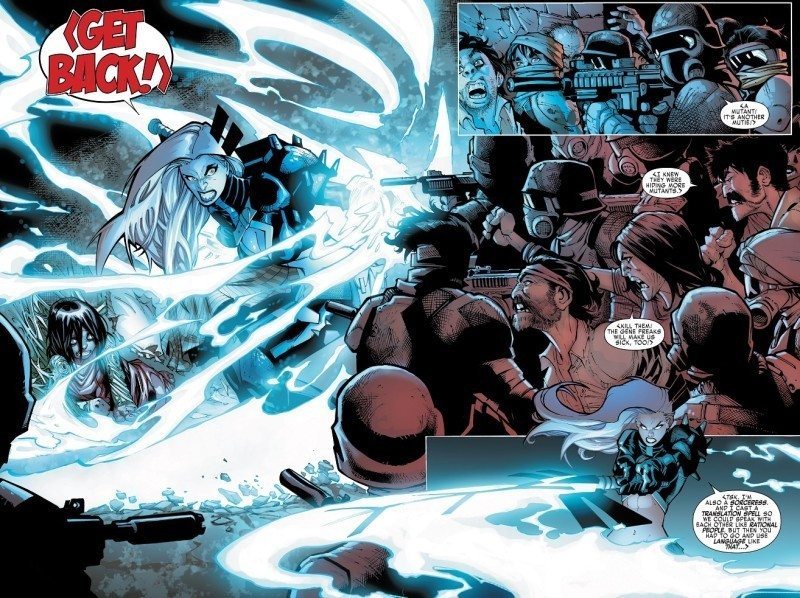 Systematic oppression and persecution of certain minorities is one of the major reasons to seek refuge in other countries, and the way mutants are being dealt with here definitely reminds us of that. Homosexuals in African states are being persecuted and executed by the state in similar ways, and many ethnic groups, such as Romani people in Kosovo, face so much institutional racism that they have no other option than to leave their home.

Keep in mind – these are only the book’s first two issues. During the course of the comic, Lemire might delve even deeper into the theme of social injustice, racism, and refugees. The very concept of the refuges during annihilation plots, no matter if they’re called Utopia or X-Haven, could be interpreted as a metaphor for states founded for certain ethnic groups who faced too much persecution – and there have been countless examples for throughout history. This is where things could get seriously political.

They also get political in ALL-NEW X-MEN #1, where young time-displaced Cyclops is having this monologue about a gang of Cyclops impostors: 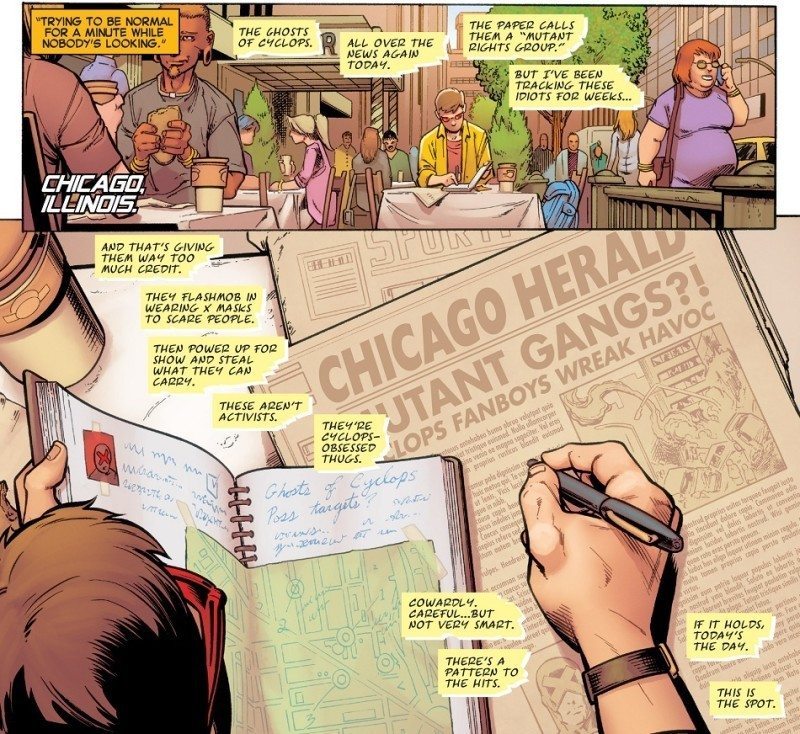 This is an interesting criticism of violent activism and social issues as an excuse for destruction and theft. This is a pretty current topic, considering the Baltimore protests after the death of Freddie Grey that happened in April.

After all, I think that with all the rage about how unoriginal and replaceable the new extinction plotline on EXTRAORDINARY X-MEN is, we don’t see the social issues addressed along the way – and what many scenes from the beginning of Lemire’s run, as well as other X-books, could be a metaphor for. We should wait and see what he and the other authors are planning – and not lose hope for the franchise.