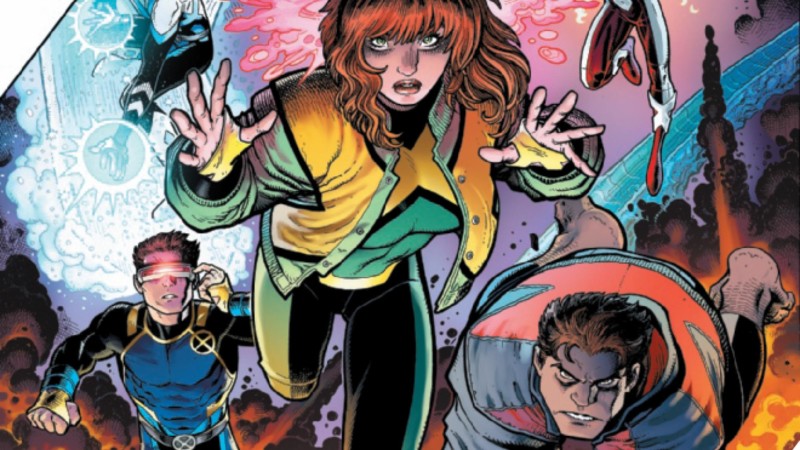 X-MEN BLUE #1 is the latest installment in Marvel’s RessurXion line. This series picks up where ALL-NEW X-MEN #19 left off and reunites the five time-displaced X-Men once again. With so much talk about who will come back from the dead in the mutant world, it’s nice to see Marvel still takes its original five X-Men seriously, allowing them to shine in their own book rather than let them drift off into the abyss. While X-MEN BLUE #1 requires a bit of background knowledge, it’s an issue that truly leaves fans anticipating the next year of reading.

READ: Curious about ResurrXion? Here’s who we think might make a return!

X-MEN BLUE #1 begins with the original five on the Quinjet, flying to intercept a yacht that is being held hostage by Black Tom Cassidy. There’s a lot of playful banter amongst the team, and this is where Cullen Bunn’s writing shines the most. As they face off with Cassidy, they do relatively well in taking him down, until Cassidy’s old time partner makes his massive presence known. Yes, The Juggernaut is back, and he makes for a great fight scene.

Eventually, the X-Men claim victory, but not before a bit of collateral damage takes place. When it doesn’t seem like The Juggernaut can be stopped, Beast makes the questionable decision of sending Juggernaut through a mystical portal that travels through hell, a move that Cyclops questions ferociously. This leads the two to a dispute, not too uncommon between them, and it makes me as a reader wonder how long this team can really stay together after finally reuniting once again.

Overall, X-MEN BLUE #1 sets the pace for the series and plants the seeds for many plot developments. The dialogue produced by Cullen Bunn seems very vibrant and true to the characters, and his decision to bring in old school characters like Black Tom Cassidy and Juggernaut is a really nice touch for nostalgic purposes. I also really appreciate how useful Angel is. He’s a character that is often left to the side, which is thankfully not the case in X-MEN BLUE #1. He takes constant initiative in fights, and he saves Iceman at an integral moment in the battle with Juggernaut as well.

As much as I liked X-MEN BLUE #1, I do have a few issues. My main criticism is the lack of introduction. This is a series that many new fans are going to pick up, so I really feel it would have been an intelligent move to a give a little more subtle background information. There are small blurbs beneath each character for his or her first scene in the book, but if you skipped ALL-NEW X-MEN, you’re going to be lost. And that’s a shame, because these are truly great characters that new fans should be able to appreciate. I’m also a bit surprised as to why Cassidy and Juggernaut are confused at the age of these characters. At one point, Juggernaut accuses young Cyclops of killing his brother, Professor Xavier. This seems odd to me, and I doubt he’s really been left in the dark about the Cyclops who did kill Professor Xavier being dead. Or, even if he has, I doubt he didn’t know about the younger X-Men running around since his brother’s death occurred.

The artwork in X-MEN BLUE #1 feels very natural and fitting. Jorge Molina’s drawings depict the emotions of each character — particularly the X-Men — very accurately, and that helps read the pages much more efficiently. Whether it’s the smirk on Beast’s face or the look of determination on Angel’s, it worked for the character in that moment. Matt Milla’s coloring, however, is what really makes this artwork pop. He really gets the shading down in each scenario. The team goes from a sunny day to a dusky ballroom inside the yacht, and the background lighting in each scene adds great aesthetics to the action occurring.

While X-MEN BLUE #1 may not be the easiest book to transition into if you haven’t read any ALL-NEW X-MEN before, it has the makings to be a great book. As mentioned, it’s nice to see Marvel continuing to utilize these time-displaced X-Men, and giving them their own team and book once again feels like the right move. It’s also important to note there’s a slight side story at the end of X-MEN BLUE #1 drawn by Matteo Buffagni, and I’m curious to see how much Bunn intersects it with the main plot line. If only some of this seems interesting, then just take my final word: the last page of this first issue will have you craving for next month’s release.