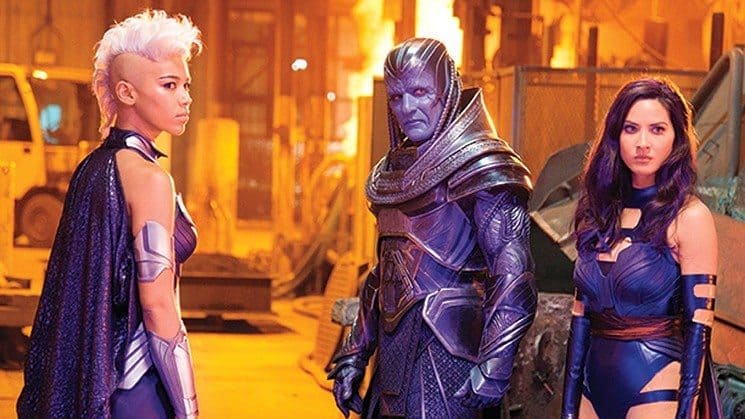 Now that we know who will be in Apocalypse’s team of Horsemen, it’s time to speculate: what does it mean for those characters? What could their arcs look like?

When the first images of the upcoming X-MEN: APOCALYPSE movie were released a few weeks ago after SDCC, most fans started raging about or making fun of the titular villain’s look and forgot to talk about something much more interesting: the cast of En Sabah Nur’s servants, the Horsemen, has been announced. For me, this is a great opportunity to speculate about how these characters will fit into the movie and what their arcs could look like! Also, who will take which role inside the team? But it’s also important to ask: how will Apocalypse be able to persuade these people into becoming his servants? What can he offer them?

This character, portrayed by Ben Hardy, is one of the most famous horsemen from the comics, serving as Death. Not only did Apocalypse give him new metallic wings, he also created the uncontrollable Archangel persona that Warren has been struggling to control for a very long time. And we will definitely see that side of the character, since Ben Hardy described him as “angry” at the SDCC panel. In this piece of concept art, Angel (without his metallic wings) is shown as some kind of circus attraction trapped in a cage.

Who knows, maybe Apocalypse will give him the strength to break free from his former life and let go of his anger. I really think that, in the movie, Angel could be the right-hand man for Apocalypse, struggling to control the darker thoughts implemented by En Sabah Nur in the second half of the film. And in the end, he could be one of the most valuable X-Men to help take down his former master!

Talking about the role of his character in the upcoming film, Micheal Fassbender mentioned at the SDCC panel that the Master of Magnetism will be “living a normal life” as a “simple guy” at the beginning of the movie, having fallen in love and settled down with a family. But, in the course of the film, according to the actor, events will take place that “[draw him] back in”. As the leaked trailer suggests, these events will have something to do with Erik having his first contact with Apocalypse. And since, according to the films creators, Apocalypse will try to give each of his Horsemen something he desperately desires in order to persuade them, I really think that he will give Erik a new opportunity to fight for mutant supremacy after he hasn’t been very active as a mutant terrorist for a long time. Which is also why I think we’ll see Magneto as War. But, since this is the third film in a trilogy that is essentially about the relationship between him and Xavier, I assume that after going full villain, Erik will find a peaceful compromise with Charles at the end of the movie. This was already hinted at in the end of DAYS OF FUTURE PAST in a dialogue between Hank and Charles where the Professor implies that all the characters will be reunited, one day.

LISTEN:Check out our latest X-Men podcast!

This character has been struggling with a serious God complex in the comic books, believing herself to be a Goddess! APOCALYPSE could delve a little more into her origins and her life in Kenya, exploring the way she thinks about herself and her mutant powers. This shot released by Brian Singer on Instagram confirms this theory: we will definitely see Storm in Africa!

We will get to know a very “lost” version of the character, as her actress Alexandra Shipp indicated at SDCC. En Sabah Nur, who has been considered a god by many ancient cultures, will give her something to believe in, something that is more powerful than herself, something to fight for, a god figure. It will be interesting to see her go up against the young versions of Jean and Scott as we see in this piece of concept art after we saw them acting as a great team in the original trilogy!

This is the character we probably know least about since this will be the very first movie appearence of Psylocke (apart from the cameos in THE LAST STAND, but, let’s be honest, nobody really thought of that character as Psylocke!). And Olivia Munn didn’t really give us any clues about her character’s arc, either. But I think it could be a great choice to bring her tragic romance with Warren to the big screen, especially because these two characters will have a shared destiny within this film. In the comics, that romance also had something to do with Warren, struggling to control his Archangel persona, and Betsy, trying to save him by telepathically stabilizing him. But all we can say for sure about the movie version of this character is that it will be pretty comic-book accurate, at least when it comes to her costume, her powers and her fighting skills (we already saw her katana and her psychic dagger!).

Of course, this is all just me speculating. What do you think?