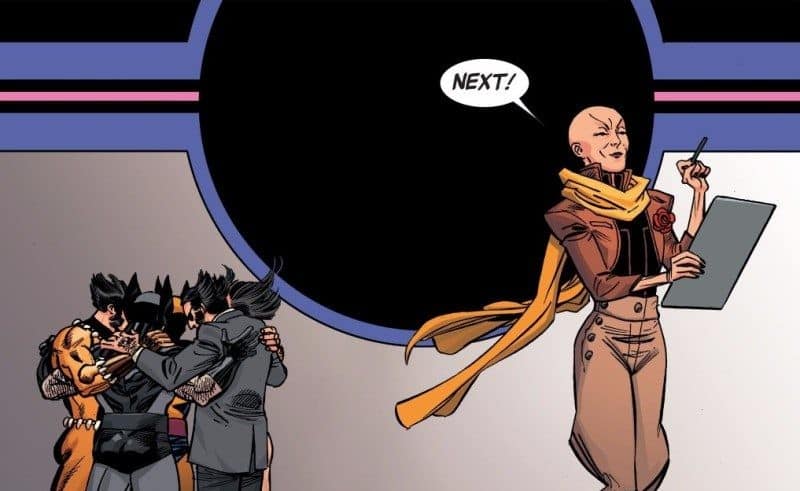 The cover of X-MEN ’92 #3 got fans talking with excitement – would we be seeing Chad Bowers, Chris Sims and Scott Koblish take on some classic X-Men?  Would Psylocke be making a full-on entry into the animated world?

Even the solicit in ComiXology says it:

When the X-Men are in trouble who can Westchester depend on? How about X-Force ’92? Cable, Deadpool, Domino, Psylocke, Archangel and Bishop enter the fray!

No.  No, they don’t.  There’s not even a mention of any of these particular mutants.  In reality, the cover – and, presumably, the descriptor – apply to a book later in the series (see comments below for a useful explanation – thanks Jack!)

Moving on, the cover and solicit aside, this is a genuinely good book.  In #2, Cassandra Nova – the very antithesis of a ’90s animated series villain – took the X-Men to “the Mind Field”.  And the result is breathtaking.  We see Nova deconstruct both Wolverine and Storm, with mixed success, and with the flair and panache that she did to Wolverine under Joss Whedon’s pen.  Both confrontations are tremendous, and Nova’s self-disclosure to Storm is truly well-written.

What’s more, as I’ve already hinted, this book cherishes its ’90s vibe – adding in a wealth of cameos that will make fans beam with delight.

And there are heroes as well as villains, when Jubilee stumbles upon a handful of those who Cassandra Nova has not experimented upon.  I’m not going to spoil the surprise, but fans of GENERATION X have rather more cause to celebrate than fans of any incarnation of X-Force!

All in all, this is a mixed bag.  It’s hard to overlook the solicit.  But for what it is, this is a very good book.