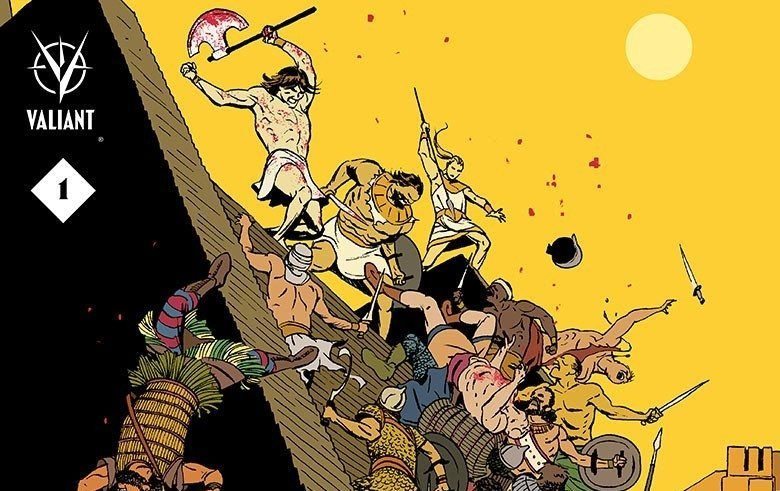 Welcome! It’s a big week for Valiant, as their headlining title WRATH OF THE ETERNAL WARRIOR finally arrives after weeks of promotion and preparation. BLOODSHOT REBORN continues its latest arc as well, with an interesting climax before next month’s conclusion and January’s “The Analog Man” storyline. These comics couldn’t be more different but as always Valiant delivers on both fronts. WRATH OF THE ETERNAL WARRIOR is set to become my favorite Valiant series, with astonishing art and solid characterization (sorry Bloodshot!).

WRATH OF THE ETERNAL WARRIOR #1 by Robert Venditti, Raúl Allén, and Patricia Martín 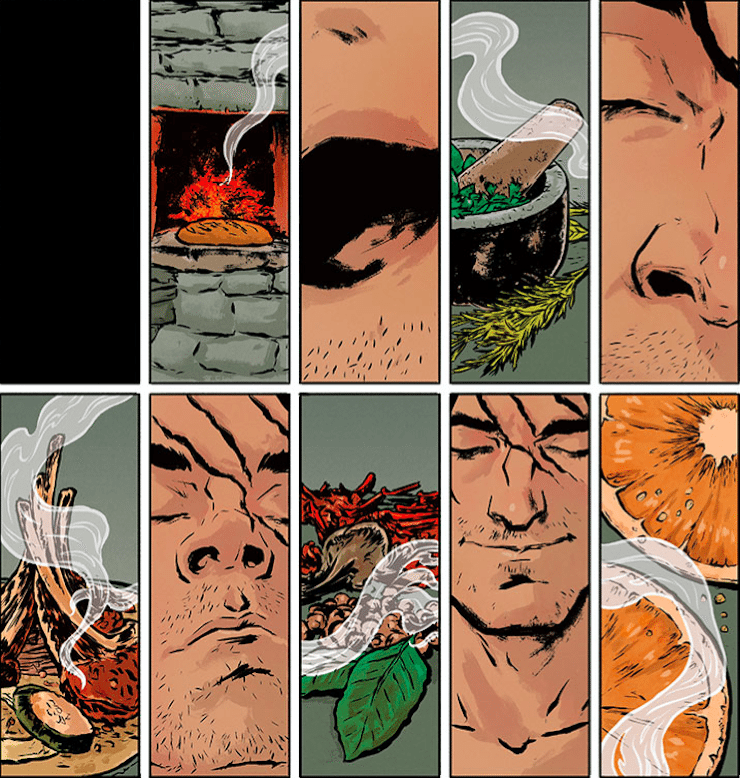 By the time I picked up this comic, I had read ten or twelve pages already. Several times in fact; this is Valiant’s huge, post-BOOK OF DEATH series and they have been pushing it like crazy, with previews in most of their books. So, at one time or another, I had seen just about half of the comic, give or take. Luckily, that did not stop my anticipation as I went to my local comic store and picked up the gorgeous Marcos Martin cover and read it in the car. And then again at home.

CLICK: For another mythical warrior, check out our review of THE MIGHTY THOR #1!

The last time we saw Gilad, The Eternal Warrior, he died. Normally this isn’t a problem for Gilad (he’s the Eternal Warrior) but this time, the Geomancer Tama released him from his duty as her protector and allowed him to stay dead. Naturally, that doesn’t sit well with Gilad, as we see in this issue. Gilad finds himself in paradise. He is reunited with his wife and many children on a serene farm, echoing his millenia-old roots. However nice this frozen piece of paradise seems, Gilad cannot relax. He can’t accept it. He’s a man with a mission, stretching millennia, and even this apparent peace isn’t enough to stop his drive. Allen’s art conveys this beautifully, showing panels of Gilad’s axe among his breakfast and his family, frozen in time, in Gilad’s paradise that emphasizes his unending quest to protect the Earth.

Gilad’s urge to return to life is the drive for this series, which apparently will see his descent into Hell, or some similar dimension. The snippets of Hell are wonderful, and Allen’s depictions of demons and visceral battles are easily the best part of the issue. Allen’s paneling during this chapter was excellent, giving Gilad a moment to breathe before his inevitable battles. The interplay between Gilad’s determination to uphold his duty of protecting the Geomancers crosses beautifully with his brief respite and reunion with his family. Allen’s work on many of Valiant’s covers in the last few years, as well as a few issues of NINJAK has been incredible, and I’m ecstatic to see such a rising star take the headline position on Valiant’s best new series. Honestly, if the rest of the series keeps up to the quality of this issue, it will be at the top of my pull list and on the tip of my lips for any recommendations I have for new comics.

WRATH OF THE ETERNAL WARRIOR is a fantastic new series from Valiant with Venditti, Allen, and Martin at their bests. It’s a worthy continuation of BOOK OF DEATH and of Gilad’s long journey, and I am already eagerly awaiting the next chapter.

Bloodshot’s story is on a much smaller scale than Gilad’s, but Lemire manages to incorporate much of his always impressive dialogue and characterization into the climax of his latest arc, “The Hunt.” 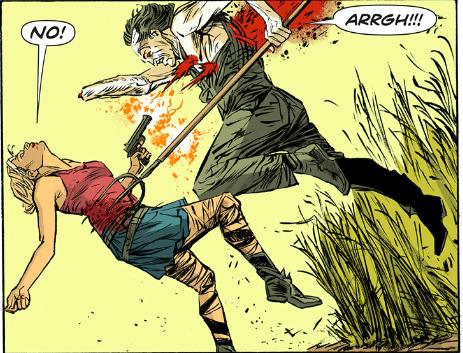 As this series began, Bloodshot was depowered and lacking motivation, though he quickly found it as his missing nanomachines began infecting innocents and driving them to kill. Teaming up with a young woman named Magic (odd naming choice, I’ve thought throughout), Bloodshot hunted down his missing nanomachines, gaining bits of his old power back with each issue. As this issue picks up, The Hunter—another individual (powered by Bloodshot) seeking the nanomachines—has cornered Magic, while Bloodshot races to save her. Meanwhile, FBI agents Festival and Hoyt discover more about Bloodshot’s past—perhaps more than Bloodshot himself knows—as they race to stop the killings. Based on the trajectory of both parties, they should meet in the next issue, which will tie everything up before Bloodshot’s jaunt into the future for “The Analog Man.”

READ: For more insane action, read our review of THE GODDAMNED #1, a bible-inspired gory epic!

Bloodshot and Magic’s relationship felt a bit forced to me in her first issues, but as they revealed more about their strangely similar pasts, I have grown to understand it a bit more. Perhaps that was Lemire’s point? In any case, their reunion in this issue, wherein Bloodshot must save her from the threat his nanomachines have brought upon her, his guilt and apprehension towards their relationship is very understandable. It plays well with her devotion to Bloodshot, and allows the two characters to grow even in this issue. I was looking forward to the next, future-set arc (and I still am) but I hope this isn’t the last we’ll see of Magic. And Festival and Hoyt for that matter; I could see them hunting down Bloodshot in future arcs for some tension.

BLOODSHOT REBORN’s second arc improves upon its first, though it has a few pacing and characterization issues that irked me a bit—but not enough to stop reading. Butch Guice’s art is stunning as ever, conveying the openness of Colorado as well as his action scenes. Dave Baron’s colors took a step up in this issue as well; everything really popped. While WRATH OF THE ETERNAL WARRIOR may be my new favorite Valiant series, BLOODSHOT REBORN continues to tell a dark, gripping, and unique story about Bloodshot. I’m interested to see January’s Mad Max-inspired arc, but next month’s “The Hunt” finale should tie everything together before that. 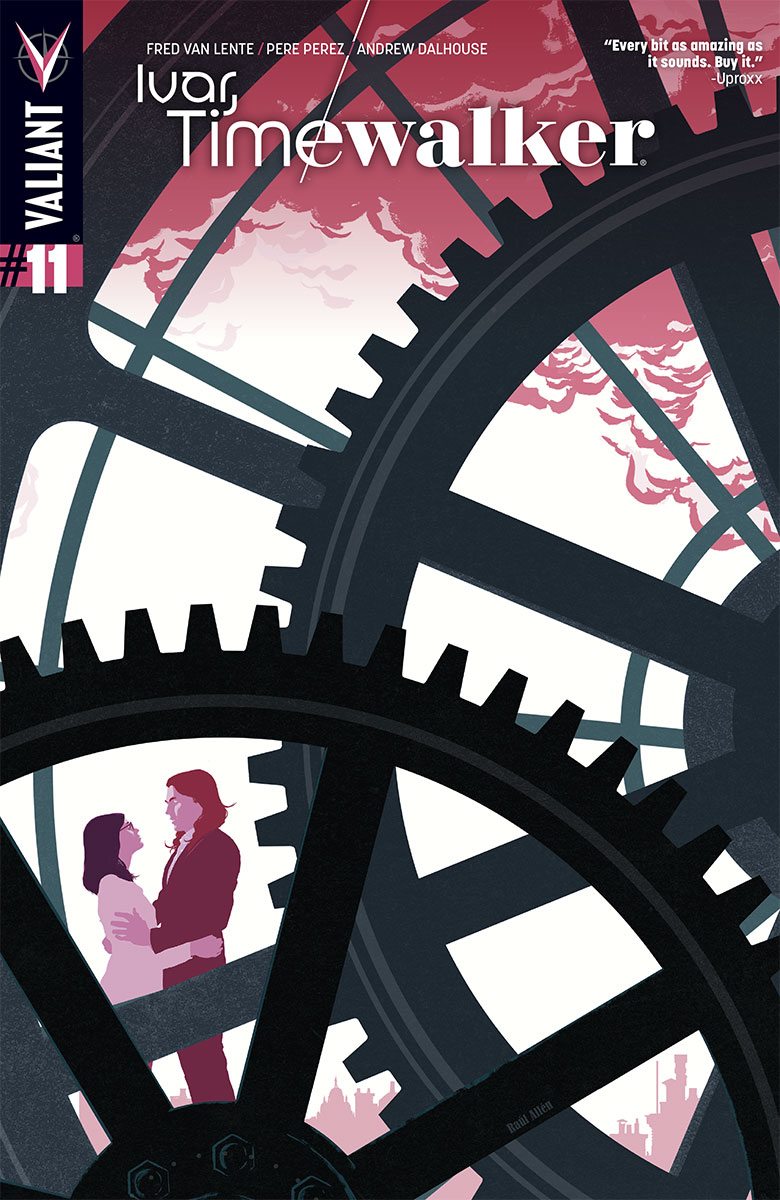