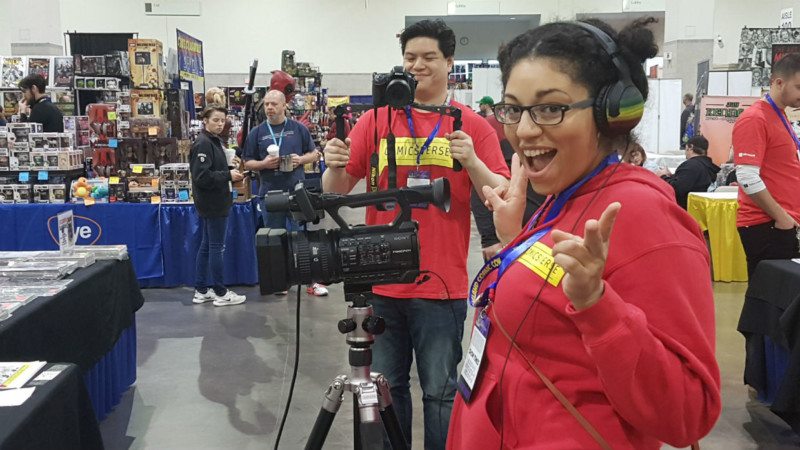 From the 10th to the 12th of November, Comicsverse attended Rhode Island Comic Con 2016. Full of cosplay, comic artists and super stars from your favorite movies and TV shows, it was a Con that had something for everybody.

Over the course of three days we talked to comics legends and rising stars, went sci-fi speed dating, gave away prizes and saw some awesome panels. We watched as Gal Gadot talked about her love for Wonder Woman, as Millie Bobby Brown from STRANGER THINGS showed that she and Eleven could not be more different, while Arthur Darvill and some of cast members of DC’s LEGENDS OF TOMORROW serenaded the panel room with an impromptu ‘Happy Birthday’ for an excited fan.

WATCH: We interviewed Mike Henderson, co-creator and artist of NAILBITER at RICC 2016!

NAILBITER co-creator and artist Mike Henderson gave us some of his time to talk about Images killer series, and Neal Adams waxed lyrical about the comics biz while Bob Camp talked about his work and history.

We saw Harleys, Deadpools, Lucille baseball bats in various shapes and sizes, a larger than life Hulk, some gremlins, a Joker or two, an Impala the Winchesters would be proud of, the 1989 Batmobile and the droids that we were looking for. Then when it all became too much, we hopped on board a Jurassic Park jeep to take us out of there! But that held its own surprises too.

The artists alley was abuzz with creative talent, with new and old creators shooting the breeze while talking to con goers. Gerry Conway, Jim Steranko, Joe Sinnott, Ed McGuiness, and a host of comics stalwarts sketched and signed for their fans. Comicsverse felt at home here, being among the comics community, sharing our passions with everyone we met. People picked up mugs, bookmarks, t-shirts, talked about podcasts, writing, up-coming projects and the love we have for the comics medium. Comicsverse had a blast at Rhode Island Comic Con 2016. Hope you did too!