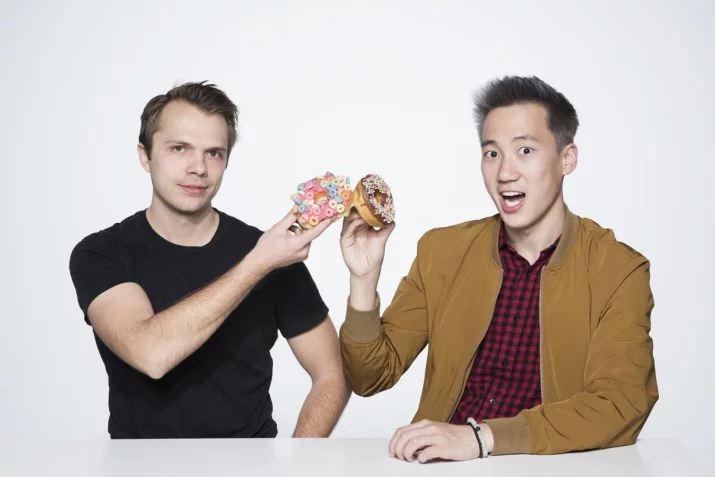 The first episode of BuzzFeed’s WORTH IT series, “$3 Sushi Vs. $250 Sushi,” was uploaded to YouTube on September 18, 2016. At that time, students across the country were trudging back to school, a man had stabbed nine people in a Minnesota mall the day before, and the tension in the U.S. surrounding the election was about to spill over like instant oatmeal in the microwave. As pundits debated and lamented the apparent deterioration of America, WORTH IT videos grew to become more than just fluff. Their timely virality suggested America’s desire for optimism to combat turmoil and an eagerness to celebrate the country’s virtues.

BuzzFeed has been producing viral, relevant content for a while (“a while” for its young adult audience, at least). The self-described “leading independent digital media company” owns the 48th most popular website in the U.S. Its main YouTube channel, BuzzFeed Video, which has 12.5 million subscribers, began in 2012 and today spawns thought-provoking productions like “Exes Get Handcuffed For 24 Hours” and “Man Sees His Girlfriend’s Period Blood For the First Time.”

At first, WORTH IT seemed to be just another swoosh through the hoop. “$3 Sushi Vs. $250 Sushi” quickly broke one million views, which is enough to deem it an internet triumph. But the views kept climbing. A few days later, 10 million people had watched it, and now the number lingers at 20 million. After the success of the pilot, subsequent episodes would appear at the top of YouTube’s trending page hours after release. Sometimes they even beat out of clips of last night’s THE LATE SHOW and FULL FRONTAL. Their view counts range from four million (“$6 Cocktail Vs. $208 Cocktail”) to 21 million and counting (“$11 Steak Vs. $306 Steak”); the majority have attracted more viewers than a typical GAME OF THRONES airing.

The pitch is this: two or three BuzzFeed employees try three items or locations with “drastically different price points” and decide which was the most worth its price. The food editions, which comprise 19 of the 25 episodes so far, originally starred Steven Lim and Keith Habersberger. In episode three, Andrew Ilnyckyj replaced Keith, and camera/sound technician Adam Bianchi also made his debut.

WORTH IT’s popularity isn’t surprising. The optimistic series occupies a different planet than the political, millennial-targeted videos that make up most of BuzzFeed’s oeuvre. They often seem to inhabit different versions of America, too. One is where everyone gets along and any hard-working citizen can achieve their dreams. The other is where stereotypes and barriers between people need to be removed before America can reach its maximum potential.

Devoid of dissension, confrontation, and disapproval, WORTH IT is at its core a fun, feel-good show. While political videos from THE VIEW and SNL fought for views, WORTH IT was in the eye of the hurricane. The show doesn’t actually care about critiquing food, distinguishing it from BuzzFeed’s more critical, even snobbish, food-tasting videos like “Chinese People Try Panda Express for the First Time” and “Professional Baker Reviews Cheap Doughnuts.” Those videos received a noticeably larger proportion of dislikes. True to its name, WORTH IT is about choosing the dish that is the most worth its price. Which one provides the most utility, the most happiness per unit? Is it good or really, really good? The hosts are perpetually optimistic, seeing only the delicious qualities in every bite.

READ: Wondering what the controversy over DEAR WHITE PEOPLE is all about? Click here to see a defense of the show!

A $1 taco plate is “so good,” “perfect,” “perfectly balanced,” and is summed up as “a simple food that leads to a simple joy.” A $48 chocolate espresso cake is “outstanding,” “incredible,” “not too sweet, but it’s perfectly sweet,” “in perfect order,” “has structural integrity,” and “maybe the best cake [Andrew’s] ever had.” A $250 sushi dish puts Steven on the brink of a “mouthgasm” and Keith “at a point where [he has] tears welling up.”

Shots of the hosts widening their eyes, licking their lips, and smiling after each mouthful prove that their pleasure’s genuine. Andrew and Steven are never at a loss for compliments. And their utter lack of negativity is a welcome respite from, well, the rest of the world.

The American diet encompasses everything from the Polish-introduced hot dog to the Dutch-born donut. It is greatly symbolic of America and its “melting pot” foundation. In that vein, watching two regular Americans praise cheap, familiar dishes like pizza encourages pride not only in our food, but also our culture. And watching them drool over the expensive versions of what they could be (like pizza topped with 24 karat gold, foie gras, and truffle) extends that pride by symbolizing the limitless possibility in America. Here, you can do anything, be anything. One day you might even become one of those elusive customers who actually orders $2,000 pizzas.

But WORTH IT goes beyond lauding food — it promotes an idealistic, cherry-topped view of our country. For a show that features gold-covered donuts and foot-long hot dogs, it’s almost eerie how the topic of nutrition is entirely absent and how this absence is barely noticeable. No one counts calories or makes snide comments about the obesity epidemic. Instead, the show spotlights the hard work and love that goes into making food. Before Andrew and Steven taste each item, we see crisp shots of the chefs cutting, cooking, and garnishing the dish. Then, we watch the owner talk to the duo about how the dish was conceived and artfully crafted.

WORTH IT places emphasis on the care behind the preparation and on the passion of the owners and chefs, who have dedicated their lives to giving their customers the best experience possible. And Steven and Andrew’s positive reactions always prove that their efforts were fruitful. As the hosts trek from California to Las Vegas to New York City, visiting restaurants large and small (and even a gas station), each stop becomes a vignette about someone fulfilling their American dream.

CLICK HERE: Have strong opinions about Steven Moffat’s DOCTOR WHO? Read this defense!

WORTH IT’s appeal in part comes from its use of common, relatable American dishes. But the show also recognizes the variety of cultures that collectively define America. The very first episode was, after all, about sushi. One bakery owner recounts how her mother, a Cuban immigrant, began their business by selling cakes to her neighbors. Another mentions that their restaurant was originally an American diner, but “a Chinese owner purchased the business, so he incorporated Chinese food in it.” Episodes with finger-licking tacos and authentic Italian pizza further add to WORTH IT’s ideology of embracing every food and culture that comes their way.

Korean-American Evan Ghang joined WORTH IT for an episode where he introduced Andrew and Steven to his favorite meal: Korean barbecue. After eating three differently priced versions, playing Korean drinking games, and telling the hosts about Korean meal traditions, Evan remarks, “I feel a lot closer to you guys. I get to pour you guys drinks, we get to talk about life. That’s the whole Korean barbecue experience.”

The Pursuit of Happiness

Eating food with others, like the Pilgrims at the first Thanksgiving or lunch with a friend, can signify peace, goodwill, and amiability. As a result, a violation of that harmony — your uncle bringing up an unpopular political opinion, for instance — feels particularly devastating. WORTH IT lets the audience in on the fun. One camera is always across from the hosts, as if we’re sitting at the table with them, and Andrew and Steven frequently look at the camera to acknowledge the viewer.

Videos like WORTH IT that show real people experiencing intense moments of happiness commonly go viral. We’ve moved past sneezing pandas and on to watching people propose to their partners, hear for the first time, and hug their parents returning from war. Yet, these recordings rarely hold any suspense — we expect the smiles and tears of joy. What really lures us to click on these videos is the promise of vicarious euphoria. By including the audience in on funny conversations and secondhand food-eating pleasures, WORTH IT can bring joy even to its most bored and disillusioned watchers.

When Andrew and Steven are left with more outrageously expensive food than they can finish, they pack the leftovers, head to the office, and share them with BuzzFeed employees. WORTH IT reminds us of the virtues of America that we desire to instill: optimism, freedom, happiness, kindness. In an era of turbulence, it’s just what we need.