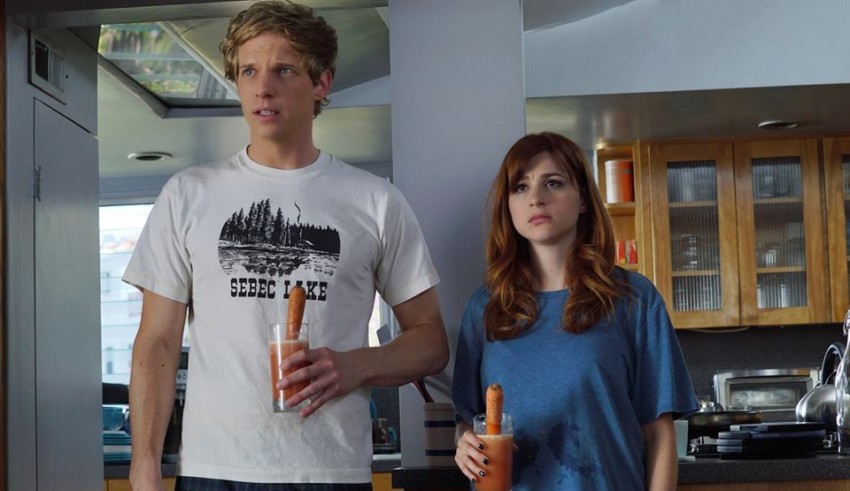 Love and relationships have always been in the blood of television, especially rom-coms—TV whose plot stems specifically from the romantic pursuits of its protagonists. The classic “will they, won’t they” question, the interlocking love triangles, and the unrequited love stories are all well known tropes that we have come to recognize. Within the genre of rom-com television we’ve gotten such iconic shows as FRIENDS, HOW I MET YOUR MOTHER, and SEX & THE CITY. However, as the new age of rom-coms emerges, we’re witnessing two aspects of the genre get further played up. Not only are shows allowed to get raunchier, there are also more hard-hitting, gut-punch moments that would normally only be seen in dramas. Couples don’t just get together because the two parties are funny and cute together. Their relationships come from well-informed character developments and genuine emotion. While older shows focused more on the comedy, newer shows have founded new romance through an exploration of the “better or worse” aspects of relationships.

The strongest example of this, is the new FXX romantic comedy YOU’RE THE WORST. While only two seasons in, the show has already covered a lot of ground. The set-up is that the two protagonists, Jimmy and Gretchen, go home with each other after their friends’ wedding. While neither are into the idea of a conventional relationship, they nevertheless find themselves pulled into it, as their feelings continue to grow for each other. As wonderful as this first season’s plot arc is—packed with amazingly witty dialogue and lovely moments of romance—the second season is where things take an especially hard-hitting turn. Gretchen, as it turns out, struggles with clinical depression and the latter half of the season shows the toll Gretchen’s sadness takes on their relationship. Depression isn’t normally something you see explored as deeply in television, and certainly not in a rom-com genre show. Long gone are the days of easy-going sex and sarcasm, but the more you get immersed into the grim reality of their lives, the more those moments hardly feel missed. Aya Cash (Gretchen) had such a moving, raw, real performance as Gretchen that she was nominated for Best Actress in a Comedic Series at the 2016 Critics’ Choice Television Awards. 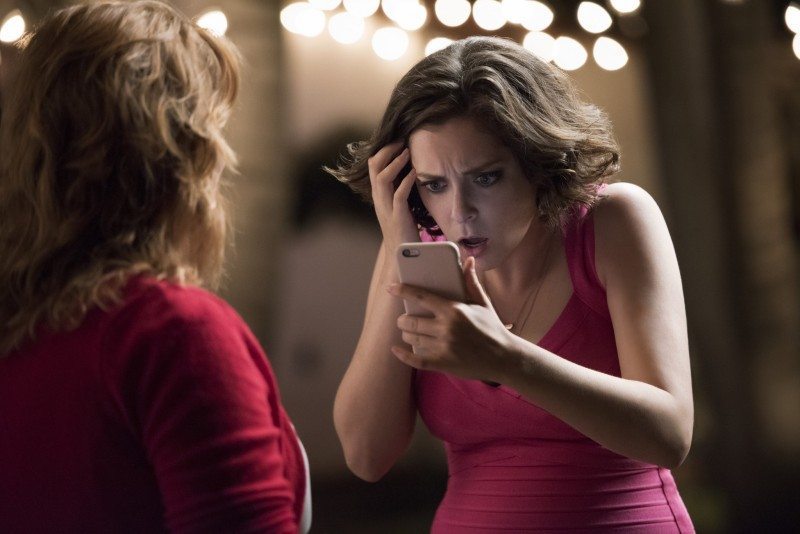 Cash didn’t actually win the award, but she lost it to a formidable competitor—Rachel Bloom, the star of CW’s new hit show CRAZY EX-GIRLFRIEND. Interestingly enough Bloom’s character Rebecca, a New York lawyer deeply unhappy with her life, faces a similar struggle with depression.  The show is about Rebecca’s relationship with Josh Chan, a former flame (a middle-school summer camp boyfriend, to be specific). After hearing about his plans to find happiness back home in West Covina, CA, she decides to completely uproot her life and move to California as well. For a majority of the show, Rebecca, initially, refuses to believe that Josh was her motivation for moving—pretending that she just needed a change of scenery to find happiness. But later, once she does confess Josh’s role in her life, everything comes pouring out—her feelings for Josh, her depression, and her understanding of how crazy it makes her seem. And not everyone in her life accepts that. Only one of her friends seem to agree with the dreamy rom-com narrative, while everyone else sees the real world crazy implications of a woman stalking an ex to his hometown. Both CRAZY EX-GIRLFRIEND and YOU’RE THE WORST set up protagonists who are as funny as they are tragic, tortured, and even terrible. And not only is it okay to laugh at both shows, but it’s also okay to want to see them in happy relationships in the end.

Now, this isn’t to say that the best rom-com stories out on television are exclusively about depressed women. What is phenomenal to see, however, is the branching out from the mold of “two kooky characters who happen to meet & love each other forever and ever” storyline that’s become a tired trope. Along with the growing complexity of relationships and characters, we are getting more intricate and interesting stories in various shows, like CASUAL or CATASTROPHE. Notably, FXX’s other anti rom-com, MAN SEEKING WOMAN, follows Josh (Jay Baruchel) through realistic dating problems taken to absurd, comical extremes. Josh can’t stand it when his ex, whom he’s still not over, starts dating soon after they break up. And sure, in this case, her new boyfriend is an old Adolf Hitler, but no one else minds it. Josh can’t understand why no one else hates Hitler—I mean, he’s Hitler—but all everyone else tells him is he’s jealous. And the twisted thing is that, to an extent, they’re right. These rom-com shows all excel at embracing not just the humor that comes from romance and relationships, but they take delight in highlighting the real pain and heart of all their characters.

But then you get shows like LOVE, Judd Apatow’s Netflix series, which do not have the same level of relationship development seen in YOU’RE THE WORST. LOVE follows Mickey and Gus, two people in Los Angeles who meet at a nearby drug store. Mickey, played wonderfully by Gillian Jacobs, is admittedly similar to Gretchen and Rebecca—she’s a complex, lonely person, struggling with an addiction to love, and the feeling of being in a relationship. Her struggle with relationships, with Gus and with other men in her life, makes for an interesting character to follow. However, Gus—played by LOVE’s co-creator Paul Rust—is two-dimensional and bland in comparison. While Mickey is a complex, tortured character, Gus is just a dorky wannabe Hollywood writer who, for an inexplicable reason, doesn’t understand why Mickey doesn’t enjoy a date to a Magic Castle (Magic House? Magic Kingdom? Doesn’t matter). While LOVE tries to break down the stereotype of a “goofy nice guy” in the rom-com genre—which Apatow has certainly played into with his previous films—all it does is paint Gus as a genuinely despicable dork. Despite this, the two become a couple at the end of the season. 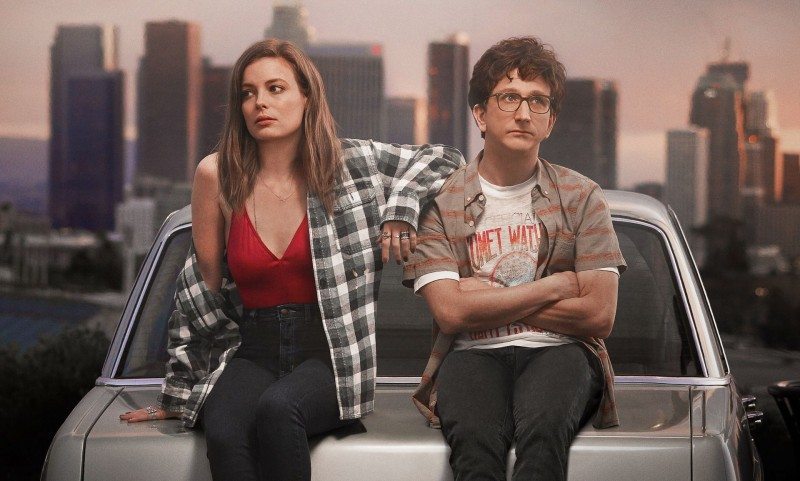 While Mickey is a character the audience can get invested in, her relationship with Gus not only preys on her addiction & insecurities it also doesn’t make for good TV. In CRAZY-EX GIRLFRIEND, Rebecca’s love interest Josh is a sweetheart bro who doesn’t know the extent of Rebecca’s feelings for him. Thus, he unintentionally leads her on her with his kindness, but quickly takes the realistic move of shutting her out when her obsession really starts showing. In YOU’RE THE WORST, Jimmy seems to resemble LOVE’s Gus in many ways,as they are both sarcastic struggling writers. But rather than yell at Gretchen for her struggles, he keeps fighting to hold onto her. He understands that Gretchen is the only person who shares his jaded outlook on love, and it’s for that reason he loves her, and can’t be with anyone else. Jimmy’s joker character takes the extra step Gus never does by associating the jokes he & Gretchen make, with the real feelings under the surface. It’s what makes Jimmy work as a 3-D character and makes YOU’RE THE WORST work altogether. Jimmy’s a legitimately bad person, and when he realizes how dysfunctional he is, and how much Gretchen deserves more than that, he steps up to the plate and becomes the mature man he should be. The episode “Other Things You Could Be Doing,” in which Jimmy makes this decision, is some of the best romantic storytelling ever, and it STILL manages to be full of hilarity. It’s not as if LOVE is a terrible television show – you can still laugh at Gus’s awkward antics. But aside from the trope of seeing the dorky nice guy get the girl, there’s no investment in Gus’s pursuit of Mickey. Say what you will about the terrible people in YOU’RE THE WORST, unlike LOVE, you can watch the series and feel for every character, no matter what they do.

READ: Rom-coms not your thing? Prepare yourself for the Y: THE LAST MAN television show

Television doesn’t have to play into happy endings. We don’t have to see steadfast couples and kooky one-off dates in shows like… well, HAPPY ENDINGS. The shows on this list certainly don’t always end on feel-good notes—often times, episodes will end on a protagonist totally alone, wallowing in guilt and sadness. But if a show understands its characters as real people, the viewers can appreciate the complexity of that sadness, and feel for the characters in question. CRAZY EX-GIRLFRIEND’s Rebecca has a moment of realization where her meddling with Josh’s love life makes her the villain of their story. YOU’RE THE WORST’s Jimmy gets so infuriated with Gretchen’s depression that he cheats on her with an attractive bartender. MAN SEEKING WOMAN’s Liz allows herself to engage in a relationship with a married man, Santa Claus. And LOVE’s Gus gets back together with Mickey just because his hot Canadian actress girlfriend breaks up with him. That choice isn’t motivated by a real magnetic need for the significant other; it’s purely based on happenstance. LOVE limits itself to a relationship based off a “meet cute”— an old rom-com trope where two protagonists just happen to be at the same place & fall in love, seemingly at random. There’s no reason for Gus and Mickey to ever know each other, but when Rebecca runs into Josh in CRAZY EX-GIRLFRIEND, Josh is an old flame moving to California. Rebecca then follows him there, moving into his neighborhood, tracking down his job, and taking yoga classes with his girlfriend. No trope there. 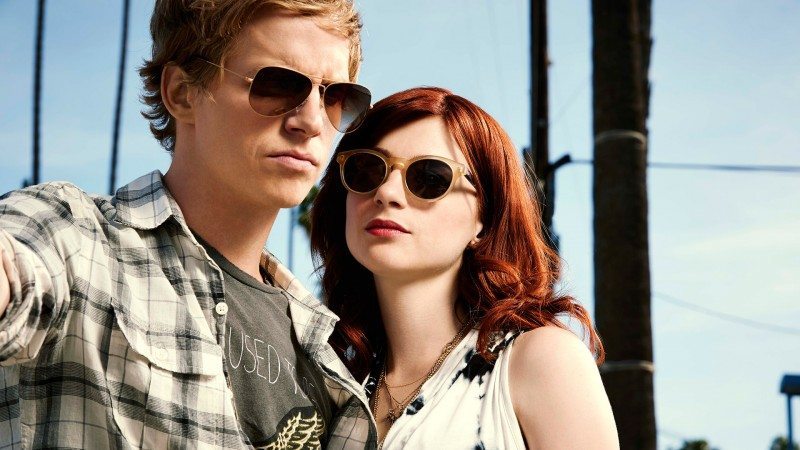 In “LCD Soundsystem,” the ninth episode in YOU’RE THE WORST’s second season, a depressed Gretchen spends a day stalking what she perceives as a perfect couple. Married, gainfully employed, a child and a dog—everything we expect to see from a relationship. And it’s everything that her relationship with Jimmy could be, everything she wants it to be. But at the end of the episode, Gretchen talks to Rob, the married man, and he confides in her just how much he missed having everything that she and Jimmy currently have. This makes her leave in a huff, with Jimmy mocking the married couple, who are left fighting in their house. It gives us a twisted look at everything we want for our TV characters, and for our own lives. But it’s a happiness that’s hard to achieve, and harder still to hold onto. It’s the hard edge to our new age of television—we get Jimmy’s zingers and Gretchen’s heartbreak in equal measure, both keeping viewers on the hook for what comes next. We don’t know if they will get married. We don’t know if Josh Chan will ever love Rebecca back, or if Josh will find a nice normal girl that loves him. But we know why we have all these questions, and why we need to have answers. LOVE, like the early days of rom-com television, wants us to laugh at the jokes and aww at the romance. They want you to only focus on the feel good elements of relationships. The new crop of stand-out rom-com shows are okay with making you feel sad—Lord knows they make their characters feel like unlovable garbage at times. But by exploring this darkness and anguish, it makes for more fulfilling romance, and creates a nice contrast for the wonderful humor. These new shows are a true blend of romance-comedy genres, and come out better stories for it.