Nicola Scott and the WONDER WOMAN: YEAR ONE story arc take a short break with Bilquis Evely taking up the artistic reigns in WONDER WOMAN #8. This issue, aptly titled “Interlude,” focuses on a key character in the Wonder Woman mythology: Barbara Ann Minerva, aka the Cheetah. 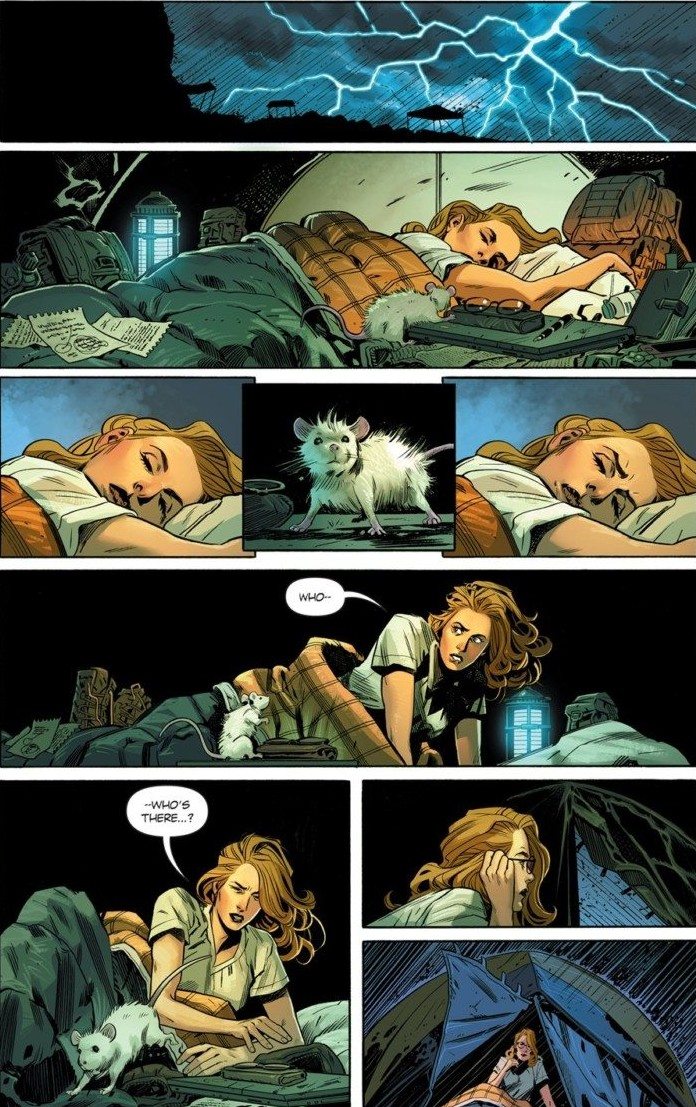 While WONDER WOMAN #8 does not feature Diana at all, it still manages to tie into both on-going story arcs. Beginning in England, Greg Rucka quickly establishes a young Barbara Ann’s love and enthusiasm for Greek mythology. Despite her father’s cold disapproval of her interest in these stories, this passion stays with her, leading to a lifelong devotion to finding evidence of the Amazon warriors’ existence. Her discovery at an archaeological dig in the Ukraine begins a quest that will bring her to the far corners of the world in search of these fabled warriors.

READ: Catch up with WONDER WOMAN with our review of #7!

WONDER WOMAN #8 is essentially a character study of Barbara Ann Minerva: what drives her and who she is as a person. This takes place before her first encounter with Wonder Woman and her fall from grace, before rising again as the villainous Cheetah. Barbara Ann is likable, tenacious, intelligent, passionate, able to hold her liquor, and never gives up. She is driven by obsession, but unlike others, it does not turn her despicable and ruthless. She is powered by curiosity and a thirst for the truth. Every thought that Rucka gives her, every gesture that Bilquis Evely bestows upon her, leads to the reader rooting for her on every page. 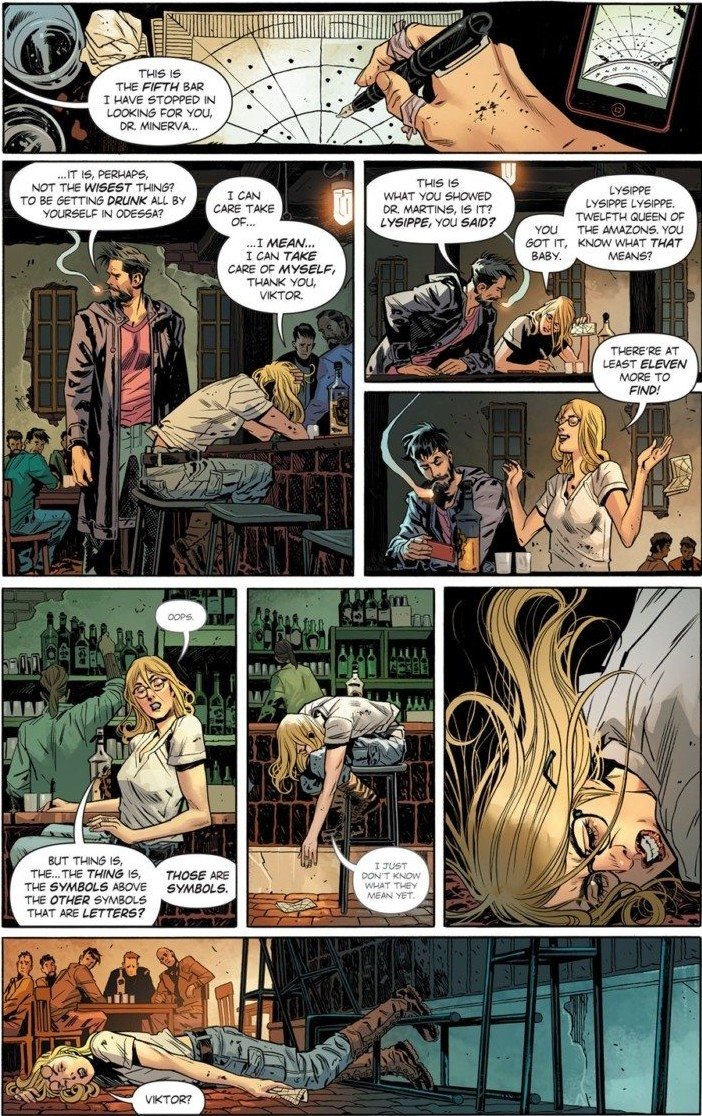 As the artist on this issue, Bilquis Evely does an astounding job of building a world that is only just a breath away from the fantastical. Her take on Barbara Ann is a wonderful, strong, capable woman that isn’t afraid to stand up for herself. Evely’s paneling and gorgeous detail look like a lovely combination of Liam Sharp and Nicola Scott’s style. Indeed, when Scott departs the series after YEAR ONE finishes, Evely will be taking over as artist, alternating with Sharp. While I’ll be disappointed to see Scott go, Evely is a confident storyteller and it will be exciting to see how she takes on Diana herself. Romulo Fajardo Jr.’s colors add depth and shade to Evely’s inks, contributing a lot of emotional layers to Rucka’s script.

Jodi Wynne continues to do some astounding work with her lettering, guiding us in tandem with Evelys inks smoothly through each panel. While other letterers would indicate when the characters are speaking in another dialect (such as attaching an asterisk and stating: translated from…) Wynne trusts the reader, changing the font style and dialogue balloons to suggest that another language is being spoken. 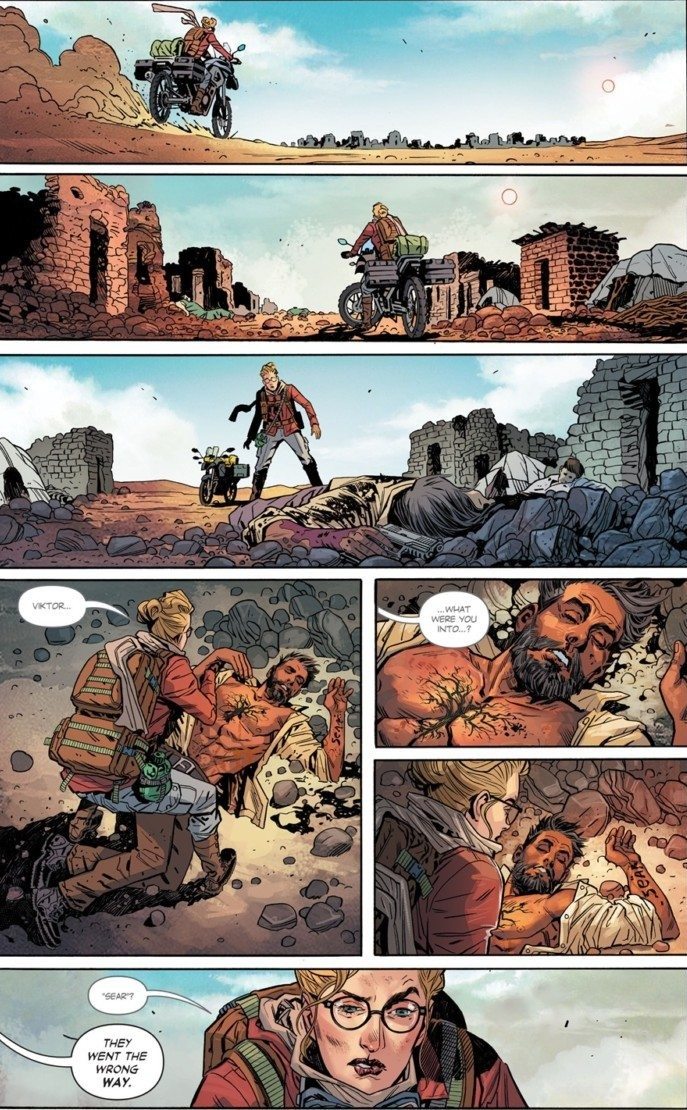 As a stand alone story, this could potentially be passed off as a filler issue. WONDER WOMAN #8 is anything but, with a central character that is endearing and engaging, and a creative team that knocks each page out of the park. This is yet another amazing issue in the fantastic WONDER WOMAN series.