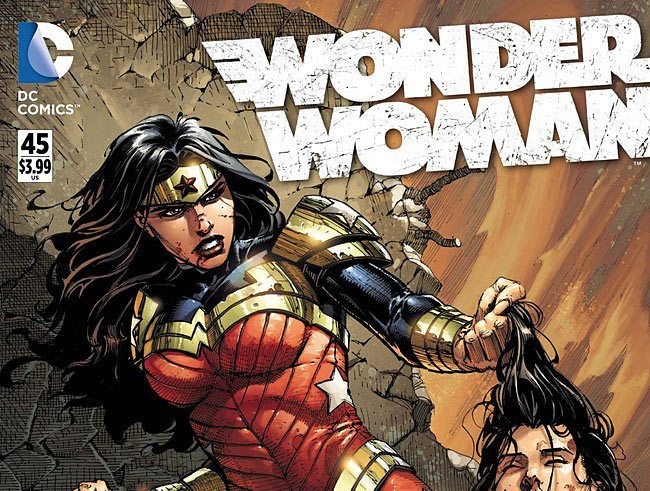 WONDER WOMAN #45 finally reveals who is behind Aegeus’ powers and directed the mission to kill Diana, and it’s just a hint of ironic. (Spoilers ahead!)

So, Aegeus crashes Mount Olympus still bent on killing Diana to complete his mission of becoming a God, and maybe even the new God of War. Wonder Woman, as usual, tries to negotiate peace with her words but Aegeus is eager to fight. He lands a few punches before Strife steps in and threatens to eat him. Aegeus is magically whisked away before he spills the secret of who is guiding his attacks; we learn his mistress is not happy with him, but gives him one more chance.

Missed the last issue? We’ve got you covered with our review of Wonder Woman #44! 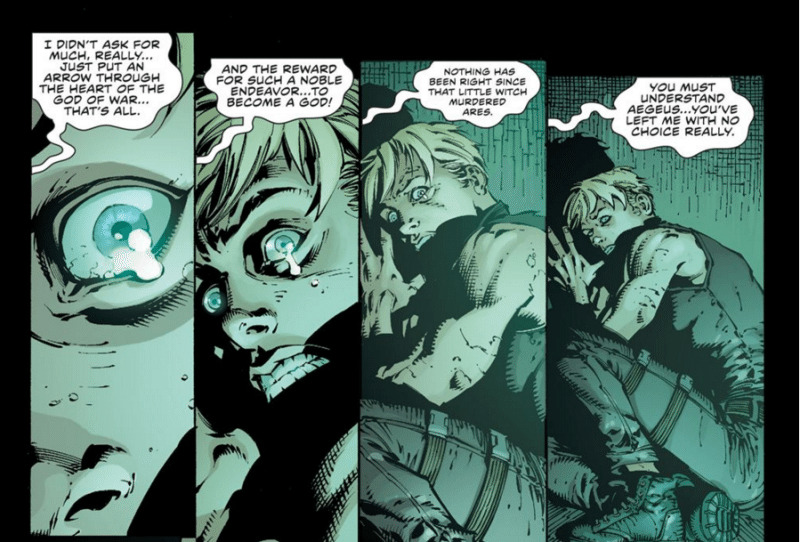 Meanwhile, Donna is bonding with her new friend Violet by spending the day sightseeing in London. Their happy day is short-lived however, when Donna runs into Link beating Violet up again. The situation escalates and Violet is accidentally killed– but before Donna can enact her revenge, Wonder Woman steps in.  Donna directs her anger at her Amazonian sister and engages in battle, but that too becomes a costly mistake.

Aegeus intervenes once again, but this time to save Wonder Woman from Donna’s wrath. Skeptical and upset, Wonder Woman doesn’t believe him; when he tries to explain himself, Eirene, the Goddess of Peace, appears to silence him.

READ: Catch up with DC’s other kickass superheroine, BATGIRL!

For the past few issues, the Wonder Woman series has followed and focused on Donna’s journey, setting up the potential for Donna to redeem herself and become a superhero. It was inspiring to see her try and be a better person, not just for Diana but also for herself–now that effort of Donna’s growth and development has been wasted, cut short by her death. It is overall disappointing. There is the chance that she will be revived, but that would seem to further complicate the plot.

The other disappointment in this issue relates to Aegeus and how quickly he switches teams. Yes, Eirene threatens him with the punishment of death, but for someone who seemed so determined to become a god, his conviction and will is suddenly weak. The next time Aegeus appears he claims he’s on Wonder Woman’s side now, because Eirene was crazy. It seems rushed, and diminishes his character. 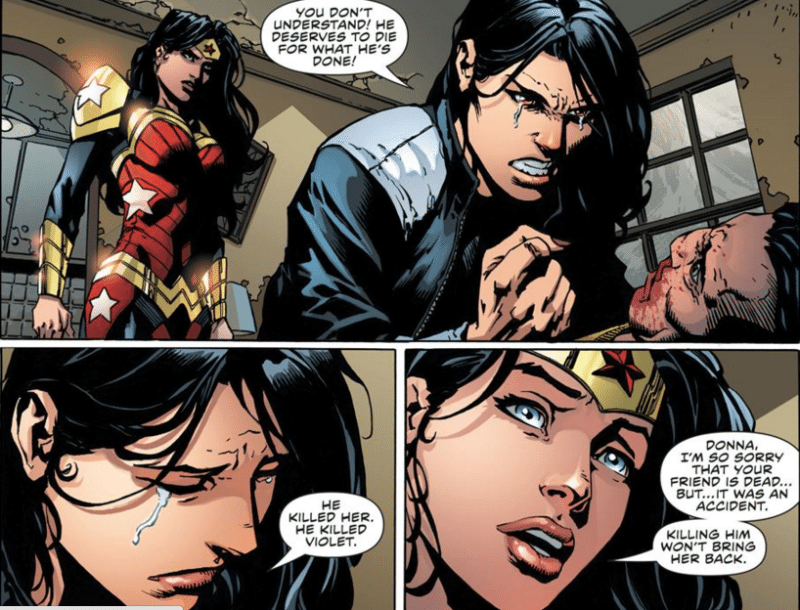 The next logical step will pit Wonder Woman, the God of War, against Eirene, the Goddess of Peace. Eirene seems to be mad at Diana for killing Ares, and there’s an undercurrent of a love-triangle brewing in this tension, which doesn’t sound too great. Overall, Issue #45 was great, but I believe it leaves the series at a weird point.