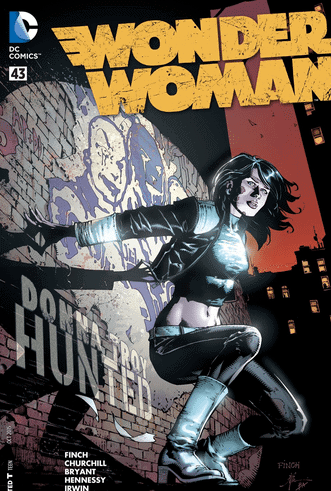 After Donna Troy “escapes” from her cell in Olympus to end her life, Wonder Woman decides to track her down. But can she rescue Donna without any interference?

WONDER WOMAN 43 Review- A Thread Outside of Time and Space?

Issue #43 opens with Diana learning of her Amazonian sister’s escape while her fellow Olympians can offer no help. The giantess Strife chimes in on the conversation hinting that it was Diana’s constant talk of redemption that caused Donna to run away. However, Wonder Woman knows better, and heads out to find her, first seeking the help of her friend Milan.

READ: Feeling Behind? Catch up with our review of Wonder Woman issue 42!

Meanwhile, Donna is in London to ask the Fates to cut her string. Yet the Fates cannot complete her request; Donna’s thread was not woven into the tapestry of time, nor did the Fates handle her thread. The three old women do, however, offer up some advice as to where Donna should look next, and it seems to involve her “birth.”

Of course, by the time Diana arrives in London to visit the Fates, things have taken a turn for the worse. Upset by the scene before her, Diana is momentarily distracted as a street kid tries to steal her lasso. But then Aegeus returns and attacks; this time he is successful in his mission to wound the God(dess) of War.

The interruption of Aegeus is important, since he attempts to defeat Wonder Woman and take her mantle as God of War. Of course, she has been fighting for peace and justice, and this conflict of interest or roles may prove fateful down the line.

Artwise, the comic is as appealing as ever, but it’s the moody, muted colors that really add to the atmosphere. If you compare and contrast Diana and Donna’s costumes they are similar in design but differ in brightness; Diana’s attire is brighter, Donna’s is dulled. It’s another subtle way of tying the two women together but reflecting their differences, and it plays with a “mirror image” visual as well.

The rewarding part of this issue, however, is the small dive into Donna’s backstory, and the hints of how she and Diana are connected in more ways than one. Historically, Donna Troy’s superheroine identities have been known as WonderGirl and Darkstar, and her origin stories have been retconned and revisited multiple times. With the words from the Fates in mind, it seems that this next arc will explore both Donna’s myths as well as Amazonian history,
which will in turn build a richer, more complex series.