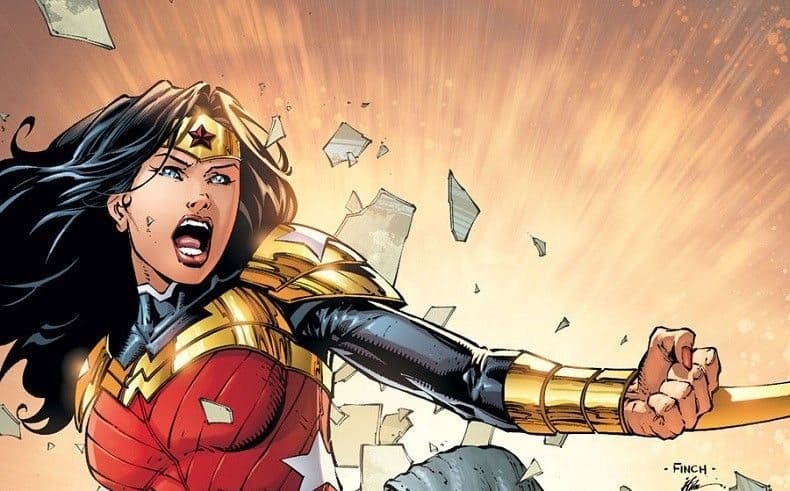 An average night out dancing for Wonder Woman and her friend turn sour as a stranger attempts to take a hit on the goddess’ life!

Diana chases after her attacker, but he decides to spare her life, fleeing on a Pegasus. The only information he reveals to her is that he was the kid on the bridge from issue #41, and that he plans on taking down the God of War.

The flashbacks, however, provide the reader with a small sense of identity. Diana’s attacker is Aegeus, and he is apparently a descendant of Poseidon. Aegeus seeks out Poseidon, but comes across someone else, who is only revealed to us as a bubbling pool of water. Apparently the two have struck a deal, and finishing off Wonder Woman would allow Aegeus to become a god.

Meanwhile, Diana goes to Olympus looking for answers. She finds none, and instead visits Donna, trying to convince the disgraced Amazon warrior to forgive herself. However, Donna receives another visitor soon after, who gives her a key to freedom and tells her to visit the Fates. It’s all got a bad vibe to it–something is amiss.

The opening scene is a familiar situation for any female clubgoers– while dancing, a man approaches Diana and after being shut down, attempts to grab her without her permission. She of course, puts him in his place. Following that, and prior to Diana’s hit, the women come across a homeless man and offer to take care of him. Once again, in very few pages, Meredith & David Finch are able to convey Diana not just as a goddess, but as an everyday hero who stands up for herself and helps others. Wonder Woman doesn’t have a hero complex; she’s relatable and kind, but has a strong sense of justice. It’s easy to admire her and look up to her because she seems perfect — a point brought up in the end in the conversation between Donna and a strange woman. Is it a hint to the underlying themes for this new arc?

CLICK: Batgirl is back and she’s chilling with her newly super father! Find out how it works in our review!