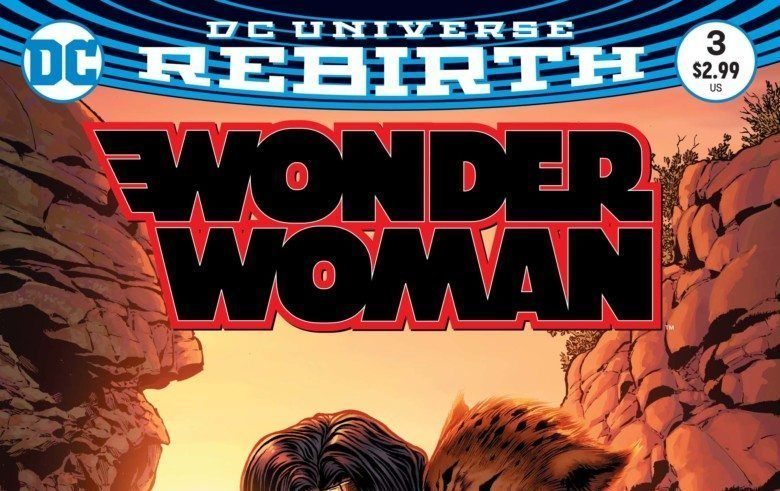 In WONDER WOMAN #3, Diana—who is searching for a lost Themyscira—is forced to turn to her old enemy Cheetah for help. It’s pretty clear that Cheetah harbors a lot of hate against Wonder Woman, chiding the Amazon for calling the villain by her human name. The strength of WONDER WOMAN #3 is how it delves into this hate, and how Cheetah’s powers come at a terrible cost.

READ: Catch up with our review of WONDER WOMAN #1!

Greg Rucka writes a great Wonder Woman. She doesn’t mince words, yet is always kind and caring. Cheetah comes across as a murderous carnivorous mess; she’s angry at herself, Wonder Woman, and the world for what she has become. She is driven by a need for “man-flesh.” Their battle here is not one dealt with by fists, but by words. Cheetah throws accusation after accusation at Diana, who deflects each in turn as confidently as if they were bullets, answering with assured honesty. Meanwhile, Steve Trevor decides to help out the village his team has stopped in, as the women of the village have been kidnapped by the enemy that Trevor was sent to track down. 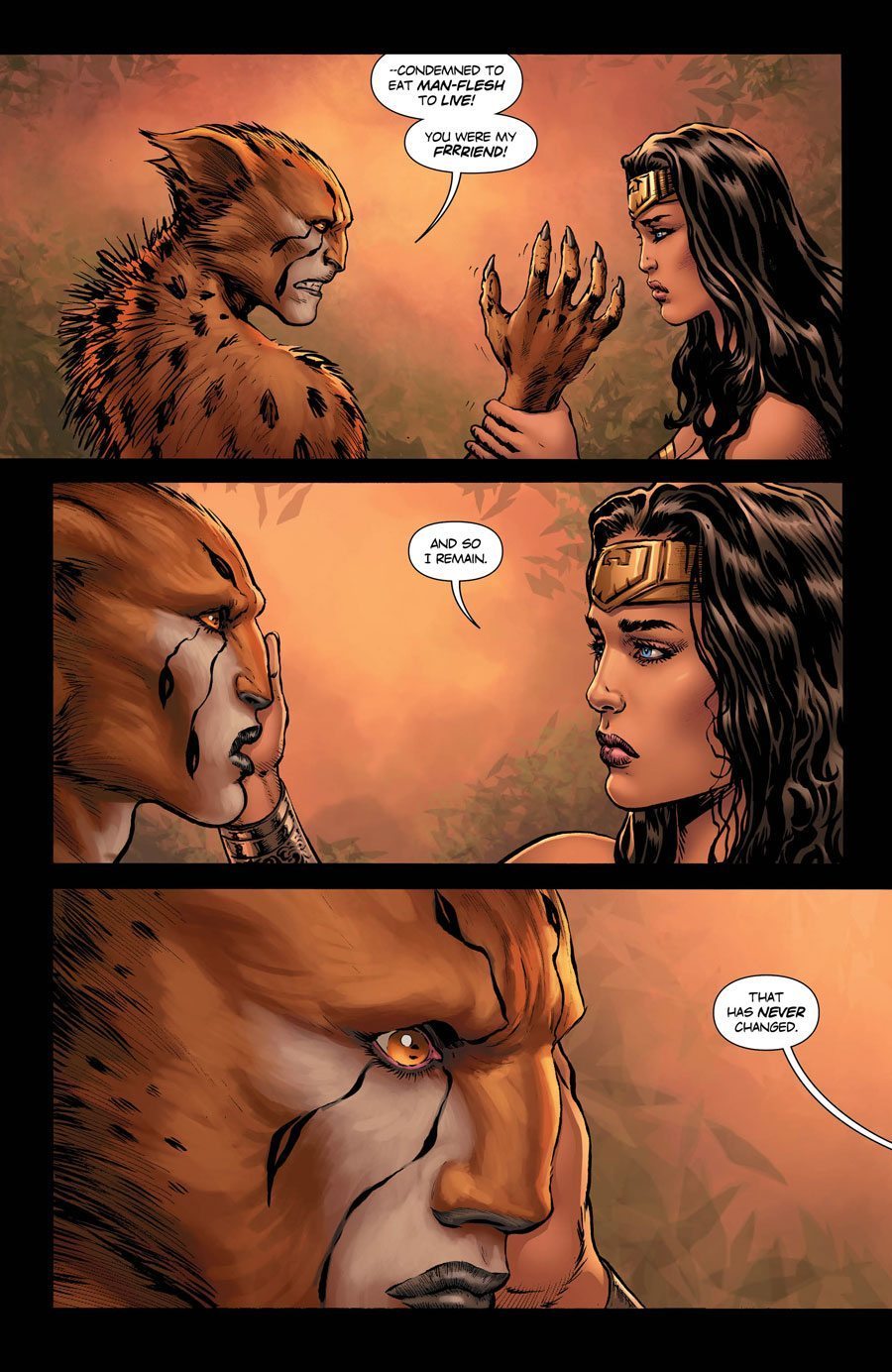 While Rucka’s script is solid, what really makes it hit home is Liam Sharp’s art. Throughout this issue, his inks convey a sadness shared by both characters with beautiful, emotional close-ups that really hit home. Diana is never scared of Cheetah, and her gestures show an earnest love for a long-lost friend she’s desperate to have back. Sharp’s art is staggering in its emotion and simplicity. A few small wavy lines around Cheetah’s outstretched claws are reminiscent of a drug addict’s shakes: that need for human flesh, but trying to keep it under control. Sharp’s art builds up to a gorgeous nine-panel page that expertly captures Cheetah’s struggle to overcome her hatred and basic instincts. You feel sorry for Cheetah, and by extension, for Wonder Woman, and the friend she’s trying to save.

Laura Martin’s colors lend Sharps inks a nice dusky glow as the sun slowly sets on these two warriors. It’s like the sun itself cannot stand to watch these friends in turmoil. Martin also utilizes eerie, spectral greens to introduce an outside element that could potentially tear these two apart or push them closer together. 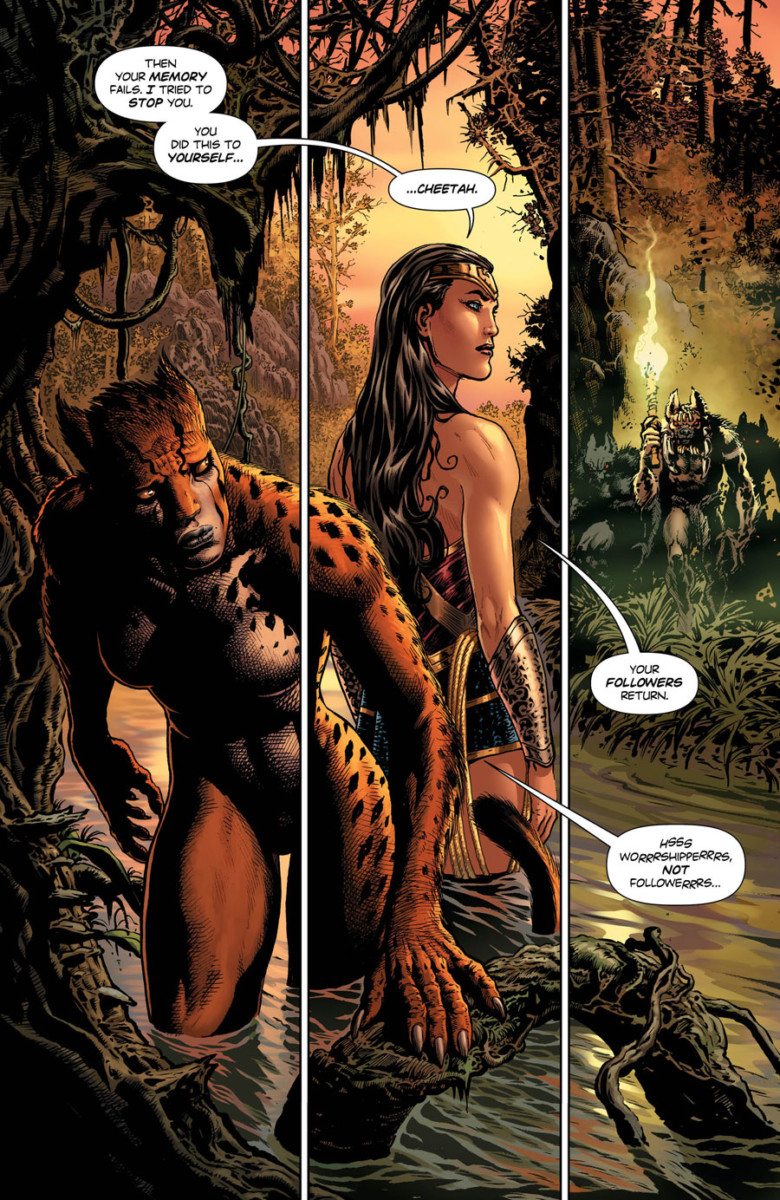 There are a few minor criticisms I have of the art; some artistic choices are off, like when Cheetah makes an aggressive move that is then negated in the next panel. For example, there is one moment where she is charging towards Wonder Woman in one panel, then in the next, she is just standing beside her. It can feel at times like there is too much action happening between the panels, which can lead to a slightly jarring reading experience. But, these are only momentary set-backs that never get in the way of an amazingly powerful story. This was an exceptionally strong issue that left me hungering for more.