Of all the DC Rebirth titles, Greg Rucka’s WONDER WOMAN is the only one to play out as a full story. Over the past year, Rucka’s four-part storyline has featured a beginning, a middle, and now, with the release of WONDER WOMAN #25, an ending. The double-sized 25th issue ends Rucka’s superb run on the book. It spectacularly concludes the story that began with Diana uncovering a terrible lie in WONDER WOMAN REBIRTH #1. WONDER WOMAN #25 sees Diana finally coming to terms with that falsehood and uncovering a deeper truth about herself. It’s a truth that was right in front of her all along.  This truth reaffirms the deepest nature of who Diana of Themyscira really is and paves the way for a new journey ahead. 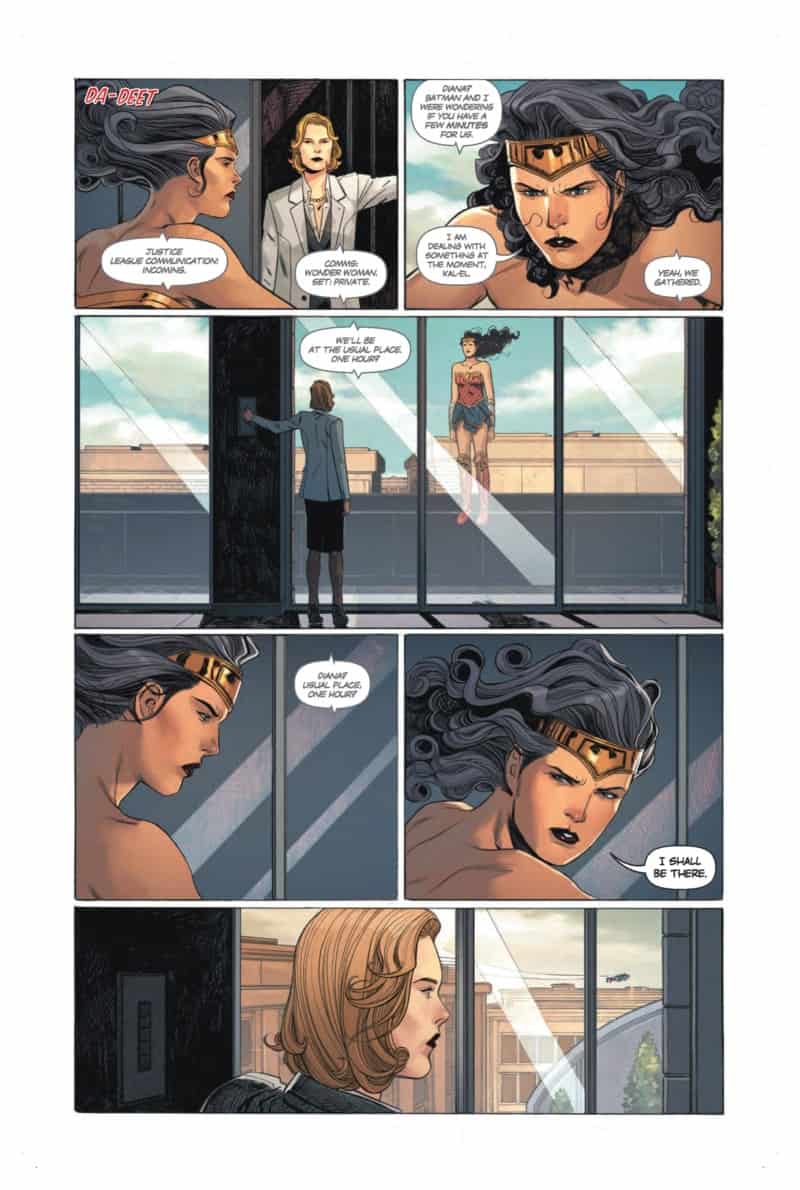 WONDER WOMAN #25 begins with a departure from Diana’s solo exploits as we’re dropped right in the middle of a Justice League mission. After Wonder Woman dispatches their opponent with an unusual amount of aggression, Batman and Superman quickly notice something’s wrong with her — and that her Lasso of Truth is missing. We catch up with a few other members of Diana’s squad, as well as the devious Veronica Cale, who’s busy amassing a team of lawyers to defend against her “Godwatch” exploits. After a brief confrontation with Veronica, Wonder Woman flies off to meet with Batman and Superman. They understand her better than any other members of the League. She tells them of her Gods’ deception, and Superman offers her some simple advice — talk to them. So Diana seeks out her Patrons for some well-deserved answers — hoping to get them in time for dinner with Steve Trevor.

After all the epic time-jumping dual storylines of the past year, Greg Rucka’s epilogue is surprisingly quiet and poignant. There’s only one brief moment of action at the very beginning. The rest of the comic proceeds as a series of quiet, introspective conversations. That’s exactly what makes WONDER WOMAN #25 one of Rucka’s finest offerings to date. There is so much purpose and meaningful deliberation held in each of these conversations.

When Diana confronts Veronica, asking her to turn Cheetah back in Dr. Minerva, Veronica refuses. The resulting anger and resentment between them is both spoken and unspoken. This acknowledges the vast despair they both experienced when they lost their loved ones to Themyscira. When Diana speaks to Steve on the phone, telling him she doesn’t know when she’ll be back, there’s so much unspoken love between them. This is demonstrated largely through the sight of the large dinner Steve’s prepared for her.

This is where Liam Sharp’s art comes in, complementing Rucka’s pensive narrative with expressive panels. These panels are so fluid they almost convey motion. As Steve paces from the beautiful sunset outside to the dark and shadowy living room, we see how lonely that house has become. A dinner for two is suddenly a dinner for one. Rucka conveys so much through simple facial expressions and breaks between panels that wonderfully convey the passage of time.

After Diana and Veronica’s brief fight, the two simply look silently at each other. As Wonder Woman prepares to take flight, she glances back at Veronica one last time. Veronica glances away, but sullenly returns the look once Diana has lifted off. It’s very hard to convey the order of this kind of look-avoid exchange without the use of a camera. Yet Sharp does it fluidly through the use of a few dynamically arranged comic panels. With Sharp, these characters seem to move and emote like living, breathing people.

When Diana meets Superman and Batman, their meeting takes place in the same Nevada desert location they met in Rucka’s story from WONDER WOMAN ANNUAL #1. This is a great nod to the meeting from that comic, and it nicely ties up a thread left off from there. In my review of the annual, I mentioned that DC’s description of the comic included an epilogue that didn’t exist. The epilogue would have shown how the relationship between the three has evolved. Now we know why that sequence was deleted, and it functions beautifully in WONDER WOMAN #25 instead. 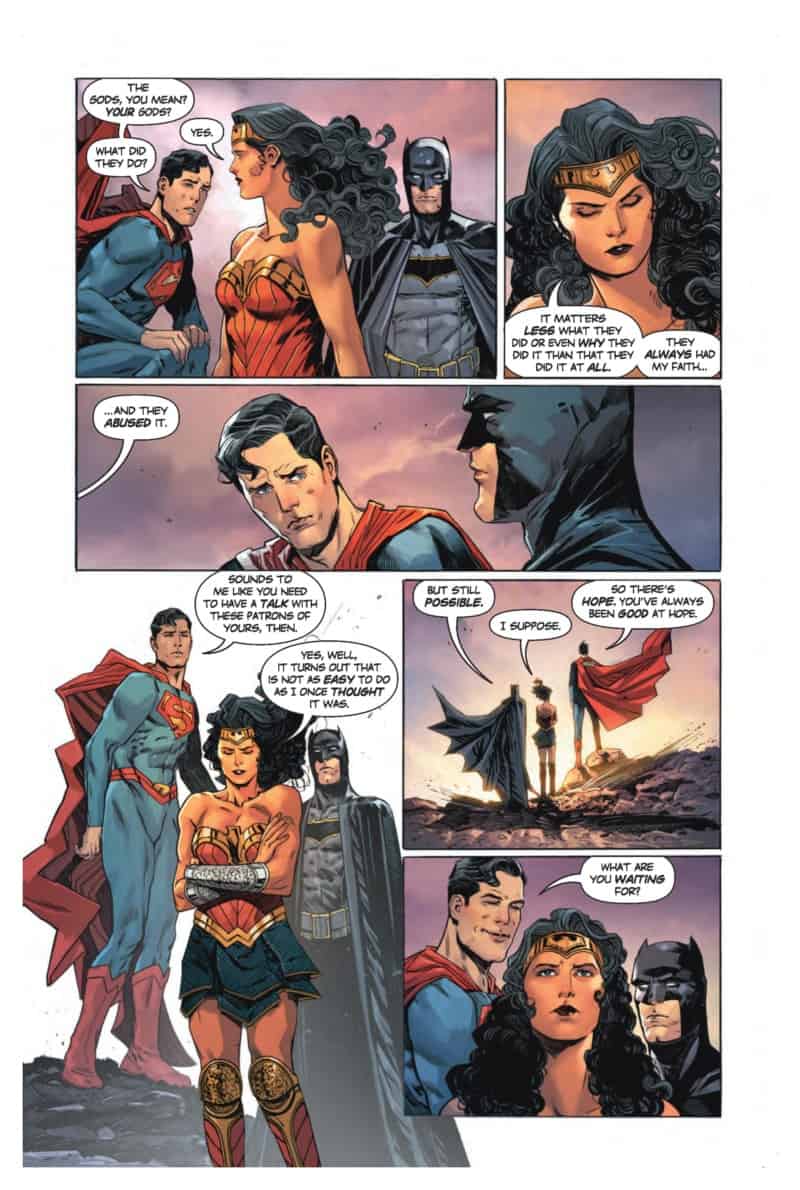 The meeting indeed demonstrates how much the relationship between the Trinity has grown since that first encounter. Batman knows Diana well enough to realize when Superman is asking her the wrong question about her journey. Superman knows her well enough to remind her that, despite the despair she’s faced, there’s still hope — because she’s always been good at hope. This is another quiet sequence that demonstrates the unspoken bond between heroes. Sharp accomplishes this largely through the looks the heroes give one another, and the comfortable way he draws them all nestled amongst each other.

Each of the comic’s pensive conversations leads the way towards the most poignant one — the conversation between Diana and her Patron. Diana arrives angry and hurt, confronting the Goddess, who appears to have taken the form of the mythological blind Seer Tiresias. Calmly, the Seer reminds her that, despite the lies that had been told to Diana, the truth of her has never changed. Diana’s truth is of kindness, decency, strength, and heroism.

When Diana looks into the pool’s reflection, she sees the truth of who she is reflected simply — it’s her. Just her, with her Lasso of Truth, restored. Again, without much dialogue, Rucka and Sharp show us the simple reality of Diana’s circumstances. As Diana notices the Gods in their protective animal guises standing all around her, she doesn’t need to say anything. Deep down she knows that they were there to help her all along. Through the lie-filled journey they sent her on, she discovered the truths that really mattered.

So Diana, having given up the quest to return home, instead decides to accept her new one — and the waiting arms of her beloved Steve. Rucka’s year-long WONDER WOMAN arc has been a journey of self-discovery. Beginning with the realization that she’d never been home, Diana went through grief, insanity, and despair. Ultimately, she grew to find a renewed strength and certainty. Her journey left her in a more confident and complete place than where she started. Diana has never returned home, but now she doesn’t need to. She has a new home with Steve, protecting the people she loves. That’s where she truly wants to be.

READ: The WONDER WOMAN movie has soared with critics and audiences alike — take a look at the ComicsVerse official review here!

Wonder Woman’s rebirth has been a retelling of her origin story that’s fostered new depth and subtlety. Rucka and Sharp, along with the amazingly talented “Year One” artist Nicola Scott, have created a Wonder Woman story that’s rich in character and history, wildly entertaining and artistically cinematic. A lot of Rebirth comics are superb in quality, for a lot of different reasons. Of them all, WONDER WOMAN has been the most consistently excellent. It’s the one I’d certifiably call a masterpiece. This has been a truly great year for Diana Prince, in both cinema and comics. As Rucka says goodbye, he lays the groundwork for a more relatable, connected, and human Diana Prince. The future has never looked more “wonderful.”