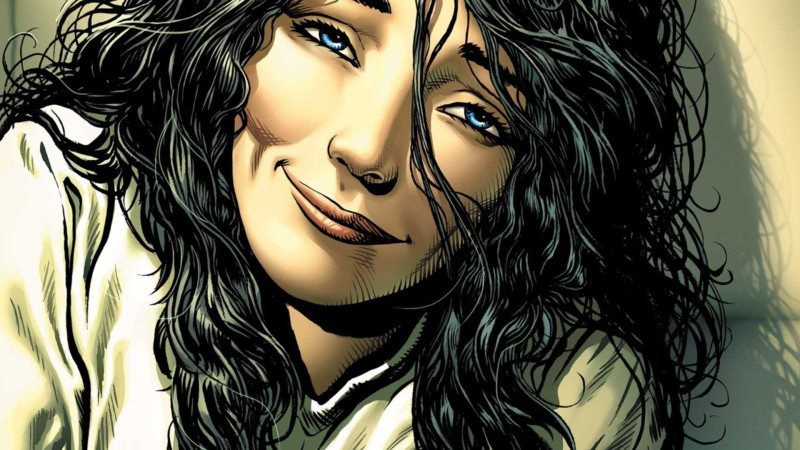 WONDER WOMAN #15 shakes up the status quo of Greg Rucka’s stellar book, as two new storylines begin. The previous format of the series, alternating between “The Lies” and the “Year One” storylines, is being continued, as both present and past storylines move forward. The present day storyline moves from “The Lies” into this issue: “The Truth” Part 1. When we last saw Diana Prince, she had been left by Steve Trevor at an insane asylum, following her mind-shattering discovery that she had never been home to Themyscira. WONDER WOMAN #15 picks up by beginning to explore the state of Diana’s mind in the asylum, while also establishing a new storyline for Steve, Etta, and Dr. Minerva, as they run from the forces of the sinister corporation Godwatch, the organization bent on finding Wonder Woman and gaining access to the real Themyscira.

The result of WONDER WOMAN #15’s multi-pronged storytelling approach is an issue that’s a bit less graceful than previous installments, as it struggles to find an even pacing between the Diana, Steve, and Godwatch subplots. Diana’s appearance is relegated to a few pages, most crucial of which is a two-page spread that depicts Diana’s hallucinatory mental conversation with the snake that bit her on Themyscira all those years ago. This snake has made recurring appearances in Rucka’s work ever since, and the snake is symbolic of her abandonment of the Gods and her choice of living with mortals. Here the snake, embedded in Diana’s arm, challenges her to figure out the difference between the truth and lies of her life, giving voice to Diana’s internal conflict. The snake, whether a literal manifestation or a symbolic one, represents Diana’s uncertainty over who she’s truly meant to be – woman or Goddess. It’s a fascinating scene that provides a glimpse into Diana’s psychological torment.

READ: Our review of WONDER WOMAN #14, featuring the conclusion of “Year One!”

Most of the issue’s page count focuses on the Steve, Minerva and Etta storyline, as they try to come to grips with the slaughter of their military team. Through a guilt-ridden Dr. Minerva, we learn of her past association with Godwatch, a group that we still know too little about, but apparently exists as a check on the forces of Gods who exert their influence on mortals. We still don’t know much of their grand plan, other than a desire to invade Themyscira, but Dr. Minerva’s association with them provides an intriguing bit of the puzzle, as we still aren’t quite sure where her allegiance lies. There’s a palpable sense of tension in this storyline, with the group’s confinement in a tiny hotel room creating a sense of imminent danger. Still, this plot doesn’t yet have quite enough juice to propel the action forward, and it takes significant page-time away from Diana’s predicament, which was immediately the more intriguing plot. 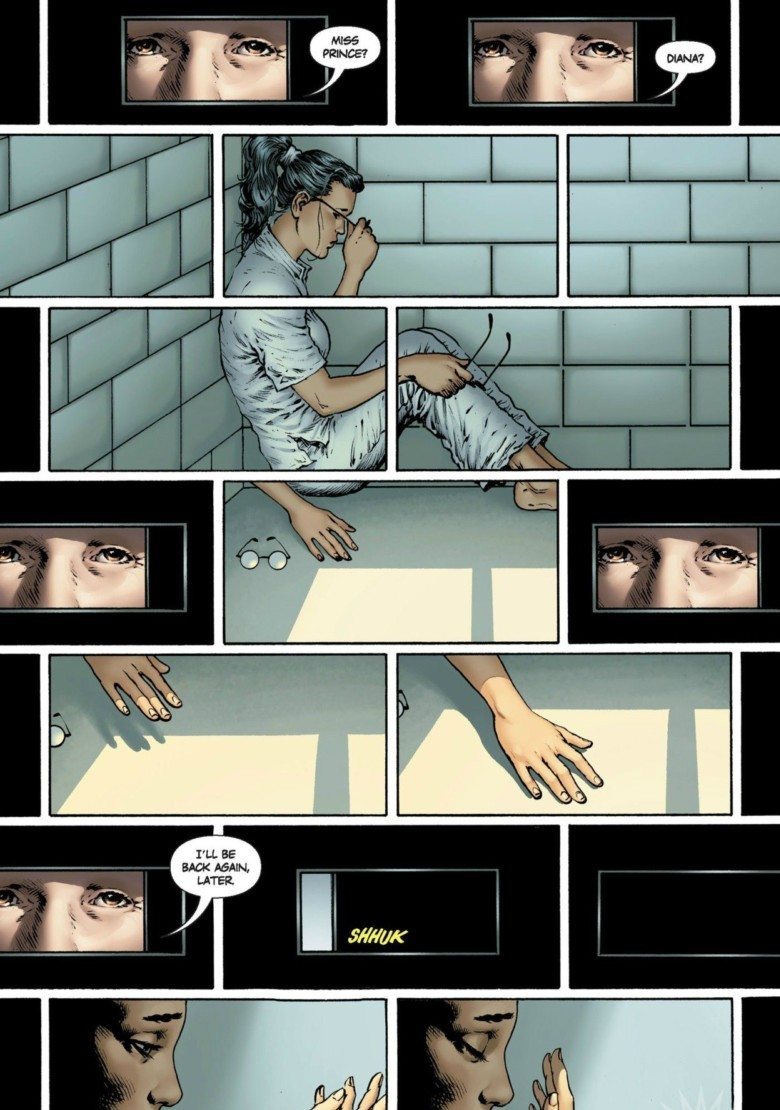 The overall result is disjointed storytelling. Each plot point is intriguing on its own, but they simply don’t work well stuffed together like this. The way Rucka cuts back and forth between the storylines is jarring, as he sometimes leaves the Godwatch plot mid-sentence to cut back to Diana’s stay in the hospital. Because both storylines require different energies in their pacing, the whole presentation lacks cohesion. I think the overall plot would have been better served if the Diana/Steve elements had been presented in separate issues. Then each segment would have been given the full weight it deserved, without any jarring tonal shifts.

READ: Our review of TRINITY #5, featuring Wonder Woman’s adventures with Batman and Superman!

The artwork by Liam Sharp is also done a disservice because of the packed plot. There’s so much information to get out that it results in various tiny, crammed-in panels. These panels don’t allow for much more than face shots, which is a shame considering how majestic Sharp’s art looks when he’s given the room to breathe. Still, there’s some excellent visual moments here, like the two-page spread of Diana talking to the snake, split down the middle by an image of the Tree of Knowledge, and drawn in panels aligned to the shape of the tree branches. The tiny panels also have an interesting claustrophobic effect when Steve and company are confined to the tiny hotel room. The urgency and desperation of their situation is conveyed largely through the compressed artwork.

Overall, WONDER WOMAN #15 is a solid opening for “The Truth” story arc, setting two distinctive storylines in motion. We still haven’t learned enough about Godwatch, but it looks like we’re going to get a new past storyline to explore their origins, beginning in next issue with “Godwatch” Part 1. The issue does present pacing problems, and unfortunately the experience is not quite as rich as the tales we’ve been presented in all 14 previous issues. Still, if better pacing is maintained, and if Rucka can find a way to connect the new past and present stories as beautifully as he did the last two, there’s plenty to look forward to in the issues to come.