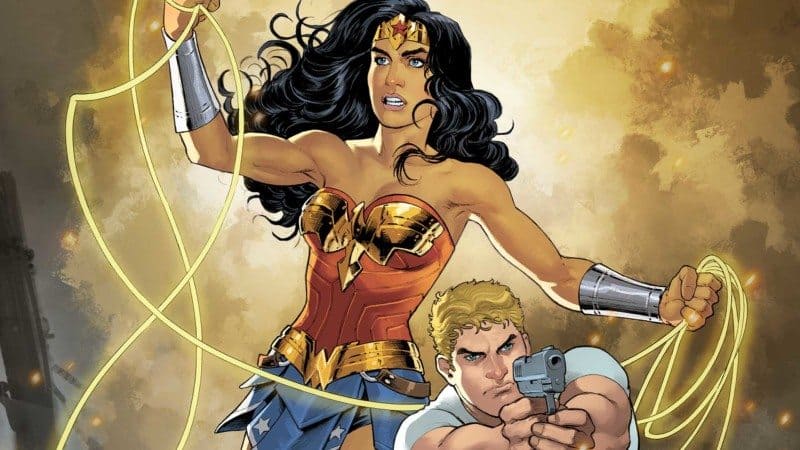 All good things come to an end, and never has this been more true than in this instance. WONDER WOMAN “Year One” has been nothing short of exemplary. Beautiful, artistic, wise and engaging in story, Wonder Woman has never been more brilliantly told since her first appearance in 1941. WONDER WOMAN #14 wraps up this modern telling of Wonder Woman’s origin with a jam-packed issue filled with global terrorism, self discovery, and a battle with the God of War himself. 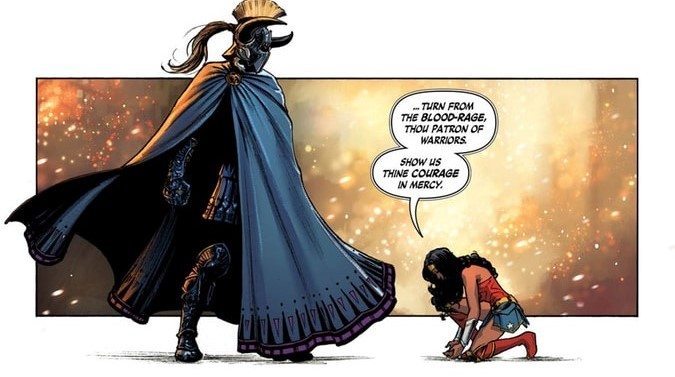 The story wastes no time picking up from where it last left off. Diana is face to face with Ares who demands to know the whereabouts of Themyscira. Unable to best him in a physical fight, Diana agrees to give him the information as long as he vows to show mercy on mankind.  After invading Diana’s mind and realizing she too does not know how to get to the island, the two face off. With the help of her patron Gods and protectors, Diana eventually defeats Ares.

Meanwhile, the terrorist group, SEAR, threatens to release the Maru Virus. Diana and Steve travel the world, stopping their attacks at every turn; but during their final attack, Diana is exposed to the virus and is sent on a homicidal rampage. Luckily, she manages to wrap the lasso of truth around herself and free herself from the Virus. In the end, Diana is celebrated as a hero around the world and officially receives the title “Wonder Woman.”

READ: Did we need another Wonder Woman origin story? We say yes! Find out why here!

Although it’s been said a million times, it bears repeating: “Year One” is simply outstanding. Greg Rucka has set the bar for future Wonder Woman writers for years to come. It’s clear he understands the character and does Diana justice. “Year One” has rightfully received much praise and issue #14 certainly does not drop the ball. 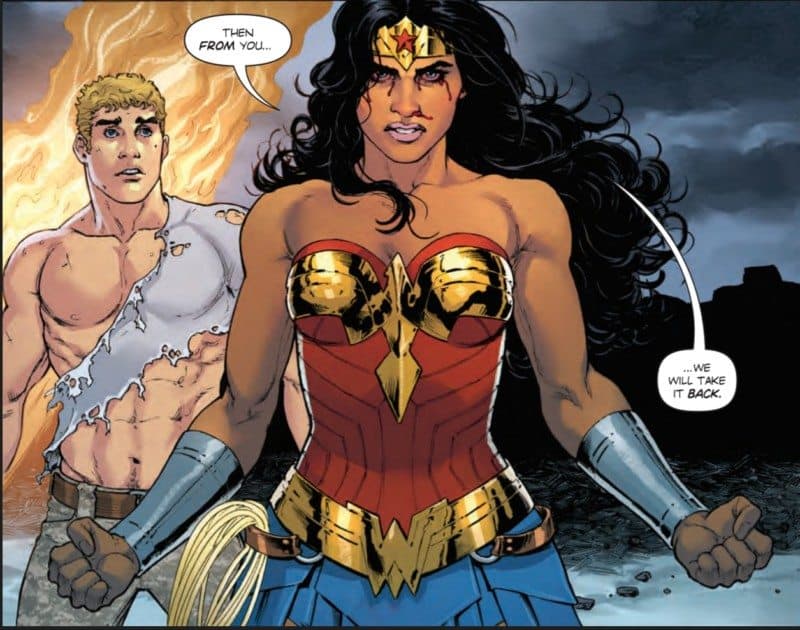 The story is engaging and well-balanced. There is a good amount of character development and action to satisfy everyone. We see Wonder Woman for the warrior and ambassador for peace that she is. Many writers in the past have sacrificed one for the other, but Rucka does not make that mistake. Diana shows humility and respect to the God of War by bowing in his presence and even subjecting herself to his invasion of her mind. However, when talk isn’t enough, she is strong and unwavering in the face of Ares. She does not hesitate to fight and defy his plans in the name of peace. Powerful, gentle, noble yet aggressive when necessary, WONDER WOMAN #14 perfectly encapsulates Diana without error.

READ: What happened in the last installment of “YEAR ONE?” Find out in our review of WONDER WOMAN #12!

Ares appears late in the series despite being the main villain for the arc. However, once again, Rucka makes it work. The slow pacing throughout the series only makes the God of War’s appearance all the more unpredictable. Ares is also more terrifying and intriguing than he’s been in a long time. His uncontrollable and impulsive anger makes him more menacing. We know he wants to find Themyscira but we don’t know why. This is good because ambiguity is not something this character has a history of.  His uncontrollable and impulsive anger makes the character more menacing than usual. Customarily, Ares’ plans are straightforward and predictable — he simply wants to cause war. However, this time around, his unpredictable and arcane scheme makes him appear more villainous and actually has me hoping he’ll reappear again soon. 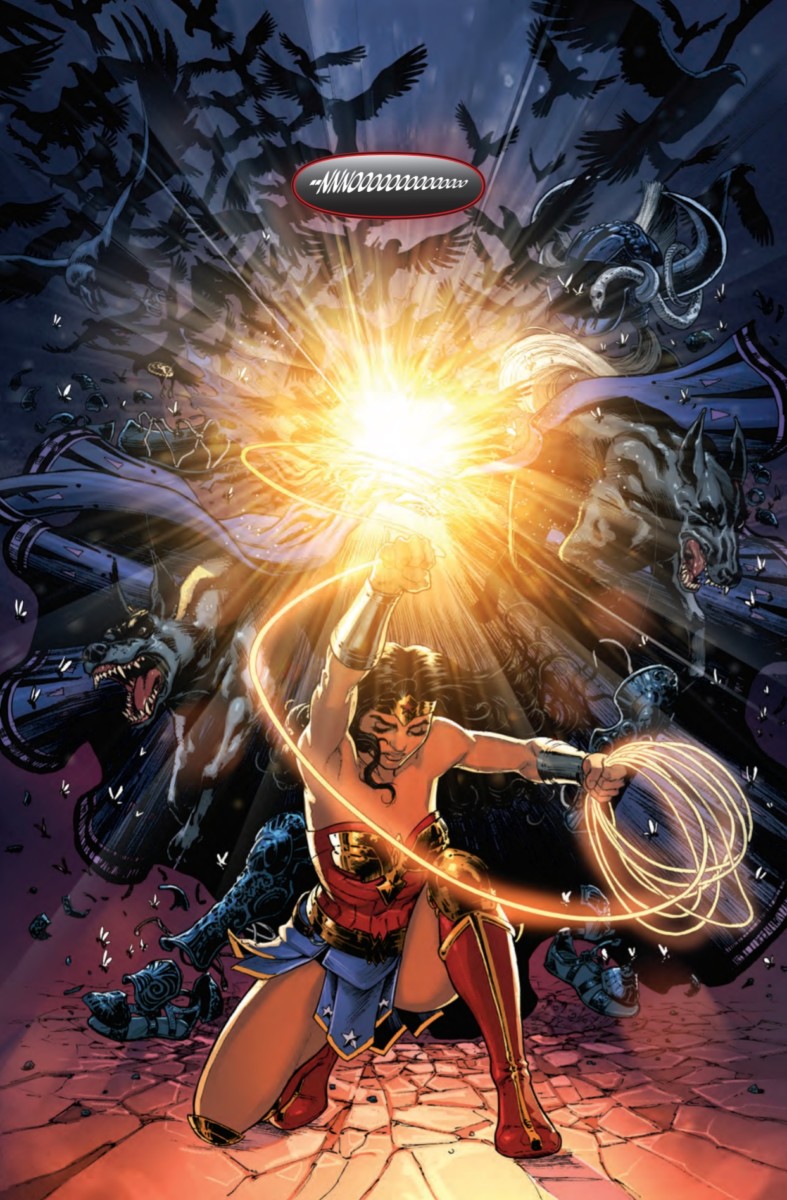 The success of “Year One” is greatly due to Nicola Scott’s art. Every panel is compelling in detail, and combined with Romulo Fajardo’s rich color, the story is visually stunning. Ares especially commands the most attention in WONDER WOMAN #14 with his towering figure and dark, gloomy composure. The overall dark colors surrounding him add to his aura of mystery and unpredictability.  The fight between him and Diana is smooth and elegant in movement and the final splash page is wonderfully intricate. The small details of the numerous flies, hounds, and crows that fly out of a destroyed Ares added tremendous drama to the page. The book is artistically mature in consistency and proportions. The lighting and coloring in different settings were vibrant and delightfully appealing.

READ: See our review of the first issue in the “Year One” arc!

My only small complaint for this issue is, surprisingly, the special effects. Call me old school, but I like the “BOOM!,”“CRACK!,” and “BAM!” on action pages. I feel as though these tiny details could have made the fight sequences even more dynamic. The blows between Diana and Ares could have had some extra punch (no pun intended) had there been some “special effects” action words.

Over all WONDER WOMAN #14 is the perfect end to an impeccable series. In only seven issues, Rucka has managed to reinvent Wonder Woman with an incredibly original origin story.  With such a high bar set, I’m eager to see what else he has in store for the princess of the Amazons.