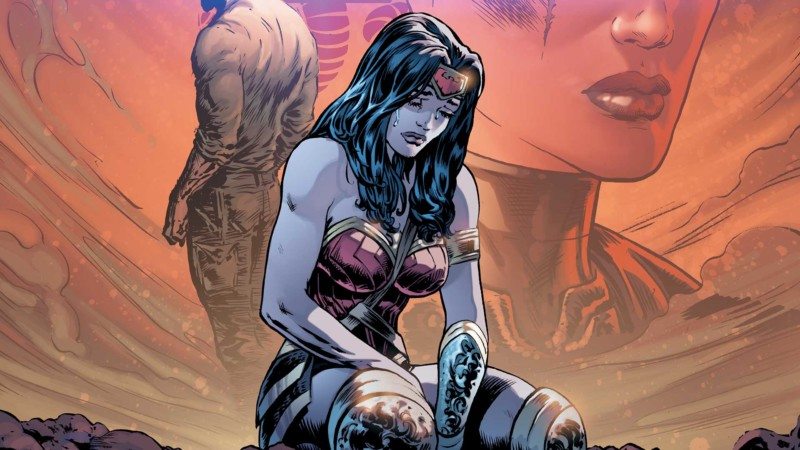 “The Lies” comes to a close with an issue that, surprisingly, doesn’t star Wonder Woman. Instead, it’s Steve Trevor that takes the front seat in this story, loaded with action and personal discovery. After it’s revealed that the island Diana discovers isn’t Themyscira, she becomes mentally undone. Now, Steve must defend himself and Wonder Woman against an oncoming threat while trying to find their way off the island.

READ: Relearn the origin of Wonder Woman in our review of WONDER WOMAN #1!

The book opens with Steve trying to bring Diana back from what appears to be a mental breakdown. However, she doesn’t awaken, and Steve is forced to call for help. Etta eventually gets a message to Steve that their team has been compromised, telling her that they’re all in danger.

Now, trapped on the island with a disoriented Wonder Woman, Steve attempts to navigate and secure their safety until help arrives. However, it isn’t long before the militia team “Poison”, sent by Veronica Cale, shows up to capture Diana in hopes of getting to Themyscira. Nevertheless, Steve utilizes his wits and military training to eventually defeat Poison and get himself and Wonder Woman off the island. 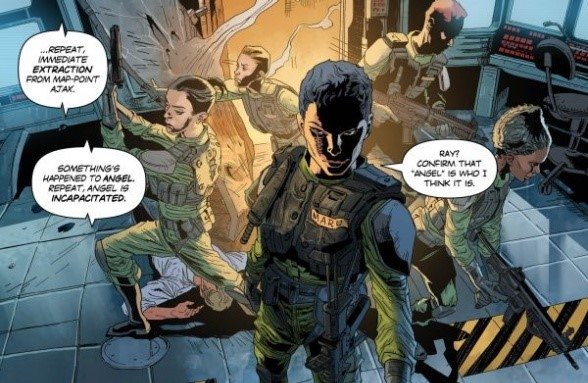 WONDER WOMAN #13 perfectly concludes “The Lies”, while leaving a good transition for the arc to come. Heavy in action as well as development, the issue accomplishes everything a conclusion sets out to do. Greg Rucka provides a premise that’s both engaging and unpredictable. With Steve outnumbered and Wonder Woman incapacitated, “Poison” felt genuinely dangerous. Under the odds, I truly felt that there was a chance the good guys couldn’t win – which was perfect. Instead of having Wonder Woman punch her way out of danger, Rucka uses Steve in creative ways that made the book a more entertaining read. One instance especially involving a spike that Trevor uses to pierce a soldier’s leg.

The fight between Steve Trevor and Poison allowed us to see a new side of Steve. As a soldier, he’s supposed to be a good tactician and fighter; however, he’s rarely shown as such. As a supporting character, Trevor comes off mostly as a “damsel in distress;” however, that is not true here. Although he defeats Poison a little too easily, it was nice seeing Trevor show how capable he is as a trained combatant. His tactics in the jungle included using Wonder Woman as bait helps break the “just a pretty face” stereotype he’s adopted over the years.

READ: Take a look at our thoughts on Wonder Woman’s previous issue in our WONDER WOMAN #12 review!

Rucka’s focus on the supporting characters throughout the series came in handy with this issue. Because of the backstory we got throughout “Year One”, it was easy to connect and care about Steve Trevor here. The letter read throughout the issue helps round him out as an entertaining and sympathetic character. We learn about his aspirations and deep-rooted fear of losing Diana. We get to experience Steve’s deeper insecurities without missing out on his witty side that we love so much. 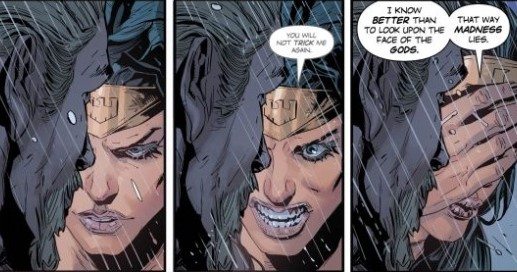 Renato Guedes’ art is solid and appropriate for the comic; however, some more splash pages would’ve been beneficial. His subtle yet effective panels could definitely tell the story without any dialogue. Also, the harshness portrayed in his faces emphasize the intensity of the comic. Diana’s facial expressions, especially, portray her “madness” perfectly. Yet with such a packed story, panels became more condensed. The jungle settings tended to look small, which made the action sequences not as explosive as they could’ve been. However, despite this, a few awkward poses and some very masculine jaw lines aside, the art overall fully complimented the story. The various colors throughout the book (the jungle especially) kept the story serious but not gloomy. It helped accentuate the stark contrast to “Year One’s” more lighthearted mood while keeping the series consistently bright.

Overall WONDER WOMAN #13 perfectly balances action and development in a way that concludes “The Lies” on an intriguing note. It leaves us wondering who Veronica Cale is and why does she want to find Themyscira? With Etta Candy missing and Diana’s sanity hanging by a thread, there’s plenty to keep us interested in what’s to come.