After using WONDER WOMAN #8 as a one shot to shed some light on Barbara Ann Minerva’s history, WONDER WOMAN #10 dives back into the “Year One” story arc, continuing Diana’s first adventure in man’s world. In WONDER WOMAN #6, we were left with a humdinger of a cliffhanger, Diana had received her powers, the most evident being super strength. She had also been placed in solitary confinement for her (and everyone else’s) protection. She uses this new found power to remove herself from her cell, much to the shock of all on the Naval Base where she was being detained.

READ: Here’s our review of WONDER WOMAN #8, which delves deep into the origins of Barbara Ann Minerva.

In this latest installment, Diana is allowed to leave the base, despite being perceived as somewhat of a liability, to immerse herself in the local culture. Steve, Etta, and Barbara Ann accompany her to a local mall. There, she’s almost overwhelmed by all she experiences, before seeing a side to America that is shocking to witness. All the while, the mysterious Sear group begin to make themselves known. 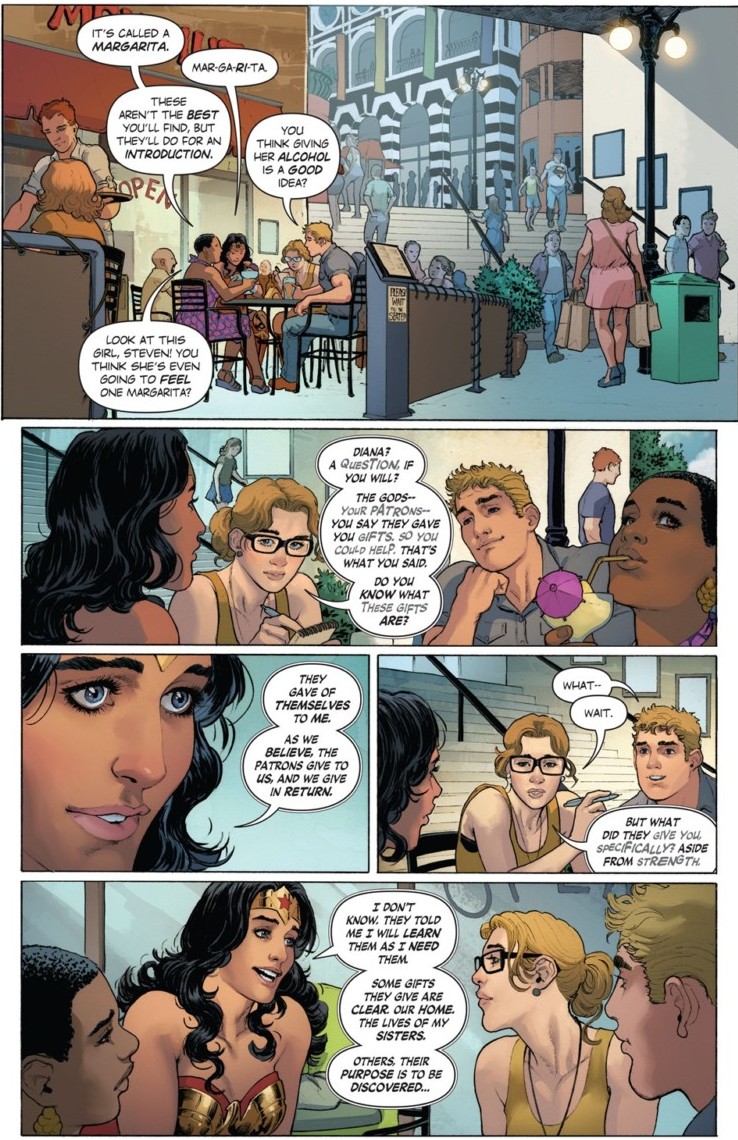 Greg Rucka confidently handles Diana’s first cultural step into the world of man. Diana’s experience is one of enthusiasm and inquisitiveness, while also silently critical of some of what she sees. There’s a certain naivety to her character that comes across wholly innocent as she interacts with the world around her. Her conversation with some children is touching in its simplicity, and her struggles to communicate with her friends are endearing, with some hilarious interactions that work like a charm. Letterer Jodi Wynne does herself proud this issue, handling Rucka’s fish out of water dialogue with care and humor. Her use of fonts to convey different languages is subtle but inspired. This leads to a conversation in a food hall that works so well due to Wynne’s understanding of what Rucka needs to make the comedy and innocence work.

READ: Greg Rucka and Nicola Scott team up for the bewitching series, BLACK MAGICK. See our review of the first issue here!

I don’t think I’ll ever be able to shut up about how much I adore Nicola Scott’s art on this book. It is sublime. She and Rucka work like a treat, creating nuances that elevate this book from being great to wonderful. Scott’s use of lines here are solid and warm, each stroke of ink exuding confidence and charm. In Scott’s hands, Diana is not only a powerful, confident Amazon but also a concerned human being. Twice in the book, she silently observes what are being sold to women (i.e. bikinis and high heel shoes). Without dialogue, Scott manages to convey Diana’s slight unease at what she’s seeing. 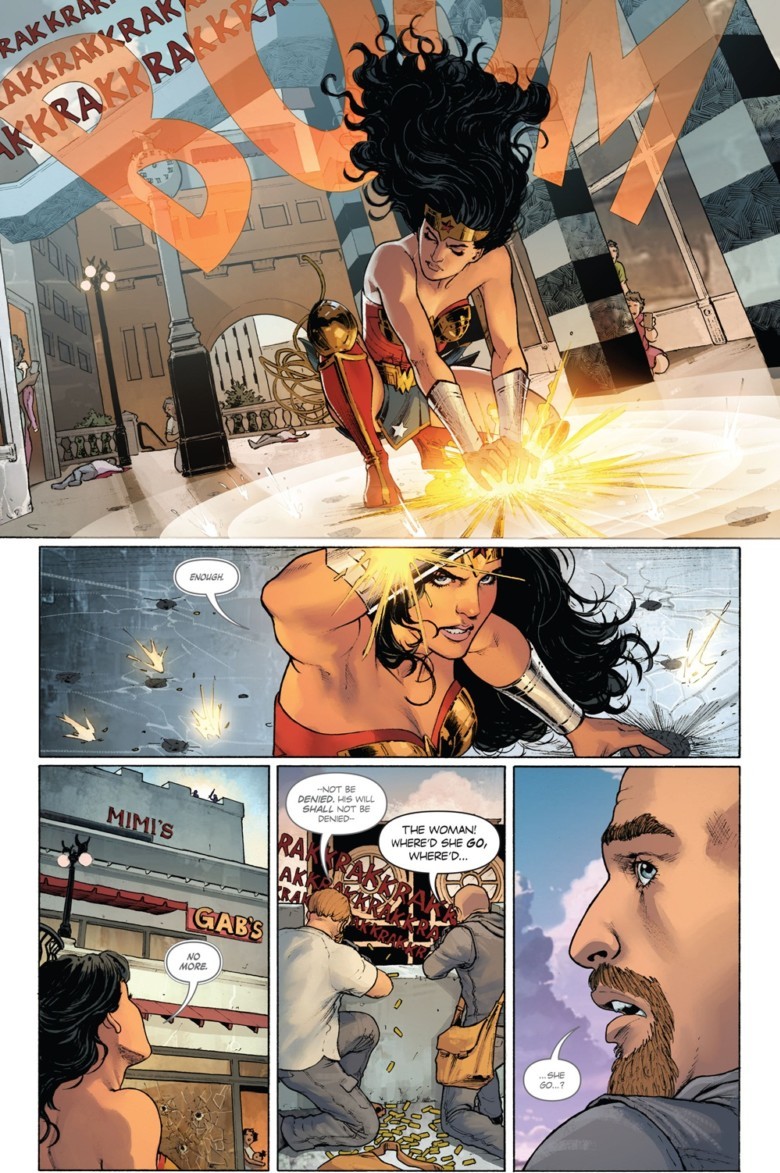 It’s in the second half of the book that Scott gets to flex her action muscles, as a gang of gun-wielding terrorists launched an attack on the mall. As an outsider, Diana cannot comprehend what she’s seeing but, nonetheless, steps up to defend the hapless shoppers. The action comes thick and fast with Diana using her golden perfect (the lasso of truth) to snatch a machine gun out of one terrorist before deflecting the bullets from another using her bracelets. Everything moves fluidly, each action Diana takes is precise and effortless. Scott creates a double page spread that reflects Diana’s graceful movement as she protects a family from a hail of bullets. It’s gorgeous to look at, but the action serves a grander purpose than just spectacle, using the fight as a means of Diana discovering her new-acquired powers. When she uses herself to shield a grenade explosion, the moment packs a punch. She didn’t know what a grenade was, or that she could even survive its blast, but she never hesitated to protect those in need. There are a few panels that feel a bit too busy, with too much background action going on, but at the worst, it’s a minor distraction. It never takes away from the impact of Scott’s art.

WONDER WOMAN #10 is a perfect blend of action, humor, a slight dash of romance, and plenty of gorgeous art to pour over. This series continues to blow your expectations out of the water, delivering top-tier storytelling from masters of their craft. It’s a wonderful issue starring a wonder[ful] woman.