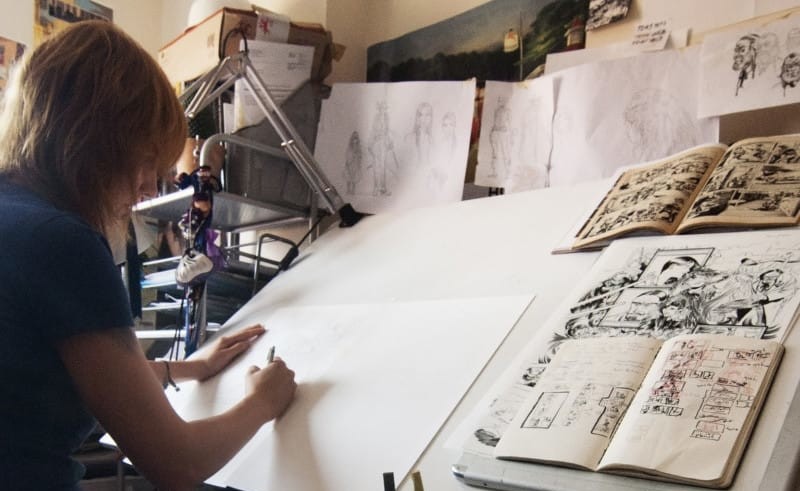 Women’s History Month—or should we say Herstory, if it’s the stories of women told over time—is almost coming to a close—and we’re truly thankful to see what contributions women comics creators have made to the storytelling art form over the years. Women across disciplines can still experience sexism in the workplace; for comics creators that seem to work in a largely tolerant and progressive environment, these attitudes could come from other sources, such as other media outlets or occasional peers with less open attitudes.

Nadia Alamah of ComicsVerse interviews Emma Ríos on her experiences as a comics creator and as a woman in the industry, and about her recent work on MIRROR and PRETTY DEADLY. Ríos started out self-publishing the series APB and fanzines in Spain, debuting in the US with HEXED; she’s also known for I.D. and her work on DOCTOR STRANGE, AMAZING SPIDER-MAN, and CAPTAIN MARVEL. 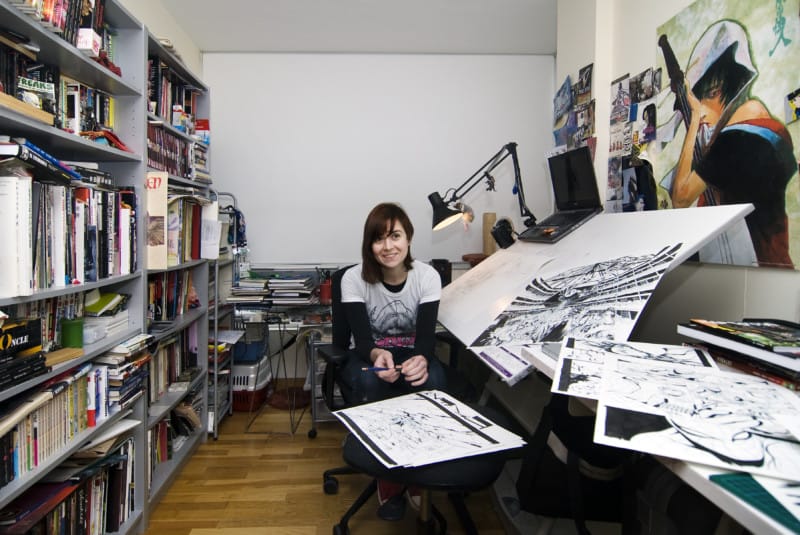 ComicsVerse: Thank you for joining us today, Emma! We’re excited to share some of your insights with our readers. What got you first interested in making comics? What do you love about them?

Emma Ríos: I learned how to read by reading comics. It was easy to get used to its language having them all around since childhood, thanks to my parents.

CV: What were some of the comics you particularly loved?

ER: I remember being pretty obsessed with ASTERIX and OBELIX and MICKEY MOUSE comics during my childhood. Other reads I had around from my family were Roy Thomas and Buscema’s CONAN, a similar adventure comic called EL JABATO in Spain by Victor Mora and Francisco Darnís, ESTHER by Purita Campos, which was a romance book for teenagers…

Later on, I grew fond of vintage issues from a Spanish sci-fi magazine called ZONA 84 and also METAL HURLANT in its Spanish edition. In these anthologies, I found out about a lot of European and American comics creators from the 80s. And I started buying superhero comics myself, with NEW MUTANTS by Claremont and Sienkiewicz being my favorite.

Then, just landing in high school in the 90s, AKIRA blew my mind, and I got, in general, crazy about manga narrative. 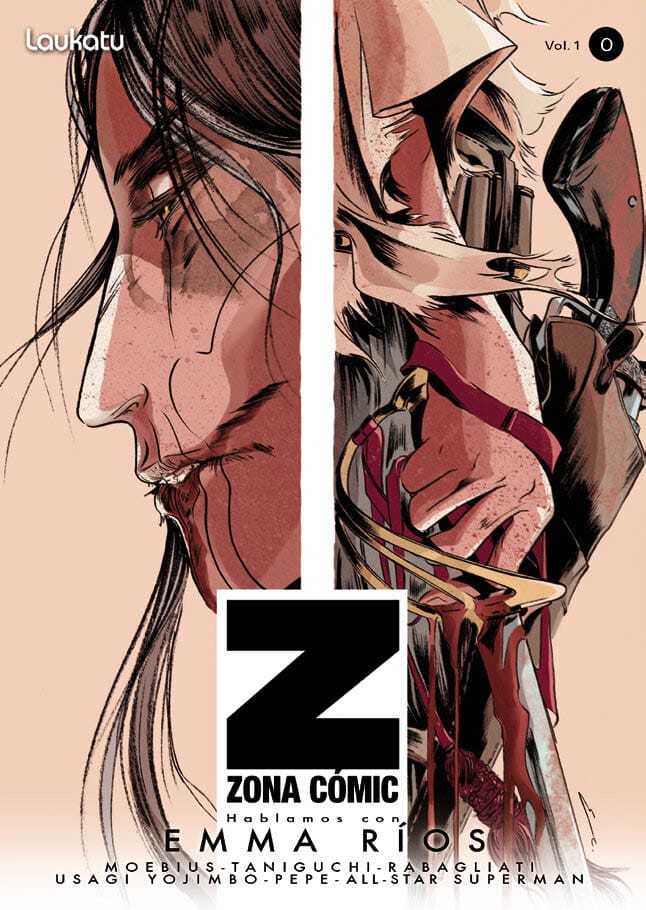 CV: What are some of your experiences as a woman in today’s comics industry?

ER: I wouldn’t know where to start, honestly. Let’s say I keep being reminded of being different since I started drawing fanzines in my teens, and no matter how your career improves, nobody seems to understand my presence in comics as normal, no matter what. I still feel like an outsider sometimes, which is rather ridiculous at this point with so many women doing comics everywhere. It’s as if, somehow, people just enjoy pretending we don’t exist.

This happens in general, though. I could probably ask you the same question regarding journalism.

CV: How does this aspect of your identity shape your perspective/experience and what you contribute to the comics world?

ER: Well, I’m not such an extrovert, and comics are my favorite way to communicate with the world because they can represent me: my perspective as a human being and obviously as a woman.

I think it should be the readers who decide how I contribute to this medium, as any language is based on sending a message to someone. The only decision I can make on my own is being honest, share my vision of the world: my dreams, my politics… with anyone who wants to read, or listen to my thoughts. Try to be genuine in my relationship with others, to not disappoint them. 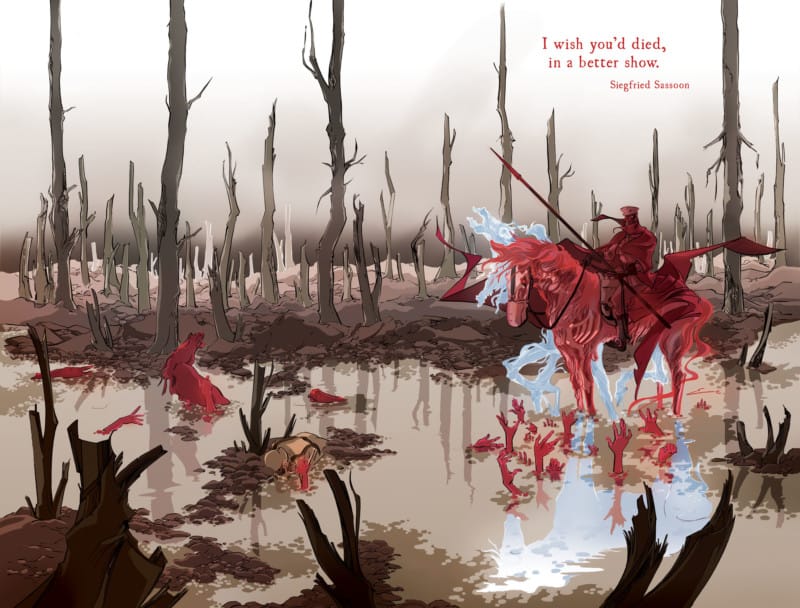 CV: Do you feel like women experience any challenges in comics, whether in the storytelling itself or behind the scenes? Likewise, do you see any more celebration of women in comics?

ER: The main challenge is being continuously branded, I think. For better or worse. Talking more about being a woman than about the work you actually produce. Experience has probably made me quite paranoid, but I feel there are continuous attempts at stealing the concept of “feminism” from us, from a marketing point of view. So it is difficult to distinguish when you’re going to be exposed in a zoo, from when your perspective is going to be celebrated in terms of representation and fairness.

In any case, I feel the debate got a lot better in the past three years, and yep, I see more celebration of women in comics. Especially regarding sisterhood and collective support. Gathering together makes us stronger and helps a lot in terms of acceptance.

In Spain we do have an Association of Women in Comics, a collective I feel very proud to belong to. Aside from trying to recover and promote pioneers, nobody seemed to remember, with an honorific prize every year, and organizing exhibitions and events, it totally feels like a girl gang to me and a safe space.

CV: What role did initially self-publishing your comics play in developing your identity as a comics creator, and how did it shape your path?

ER: It made me care a lot about creators’ rights, about independent work and creators, and about the whole process of production. I still love self-publishing more than I can say, but working at Image where I can actually own everything I produce and work with total freedom while making my living from it, thanks to the amazing policies they have, makes me feel at ease; so I don’t need to return to the struggle of doing everything alone that much.

Right now I feel like the luckiest person in the world, living a dream come true. Hopefully, I don’t need to wake up ever again. 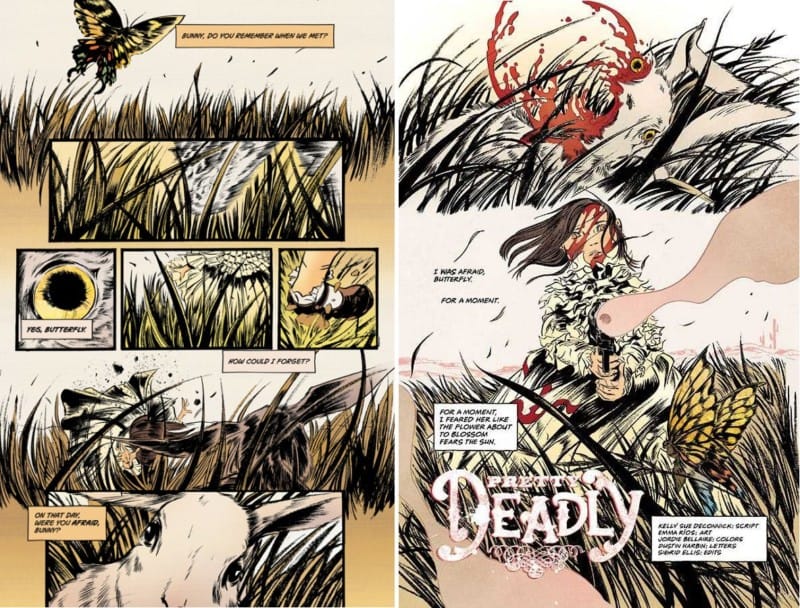 CV: What do you enjoy about collaborating with others to tell stories? Have there been any challenges with collaborating, and if so how did you go around said challenges?

ER: I love drawing and writing my own stories but, when I do that, I can’t help becoming a bit self-obsessed with whatever I’m producing; so it’s good for my mental health to combine that with collaborations with people I really like. Like Kelly Sue, Hwei or working with Brandon on ISLAND.

Collaborations make me grow as a creator. The people I work with inspire me, and I feel the need of drawing/writing better, to give them something in exchange, to surprise them. It’s a pretty deep relationship.

LISTEN: Episode 87 of our podcast celebrates the women of X-MEN in a post-Trump world!

CV: What are some of your favorite stories/characters that you’ve worked with so far? What kinds of stories do you feel compelled to tell?

ER: My favorites are always the books I’m working on. As a creator, I need to believe I’m improving one panel at a time to keep going so, obviously, my last books have to be my favorites. Those are MIRROR, in which I work with Hwei Lim, and PRETTY DEADLY with Kelly Sue.

MIRROR’s second arc has just started last week with Issue 6, and I already started drawing the third arc of PRETTY DEADLY which will be released this year, at some point.

That being said I still like I.D., which is an improvement as I normally can’t look at my pages after a month. That book was so special to me because it was the first story I dared to write in English, which is my second language.

And I’ll never forget ISLAND in my life. Working on that magazine with Brandon and all the creators involved was an amazing experience that made me grow incredibly as a creator. Sharing space with those amazing stories inspired me so much, and it definitely helped me understand the medium better. 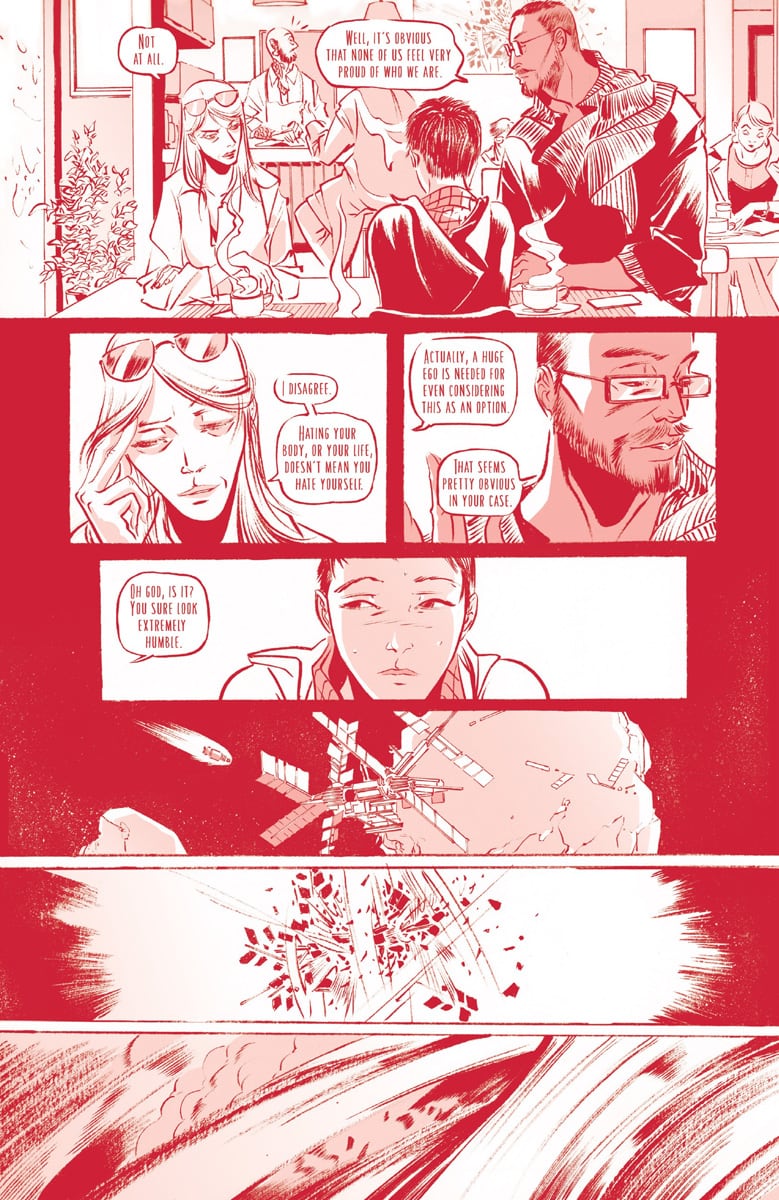 CV: What do you hope people take away from your stories and characters, or the way you depict the stories you’re working with in illustration?

ER: It’s not that I purposely intend to inspire. The only thing I can do is to work from my own perspective, and in the end, there will be people who like it and others who don’t.

Please don’t misunderstand this as a lukewarm answer. I just don’t feel very comfortable making speeches or big statements, believing my comics can speak on my behalf. Sometimes I wish I could shout louder, but I assume this is just my personality.

When I work I normally ask myself questions I don’t know how to answer, not looking for others to answer those for me, but to think about them and see if I can have an opinion. If by reading my stories, some people could feel the need to ask themselves the same questions I ask myself, my message would have been delivered.

We live in a time in which the speed of communication with each other makes quick judgment very easy, bringing on a continuous lack of empathy sometimes. This bothers me a lot. So, I guess perception, failure, and acceptance will be continuous references in my work for a while.

READ: Help Kickstart the comic BINGO LOVE and see why people are smitten with it!

CV: Would you say that anyone’s creative work has influenced your work?

ER: Of course, but it is always difficult to name them as they are a lot. I wouldn’t be working as I am if it weren’t for other people who had inspired me throughout the years.

Some people who come to my mind, in connection with what I’m doing at the moment, would be: 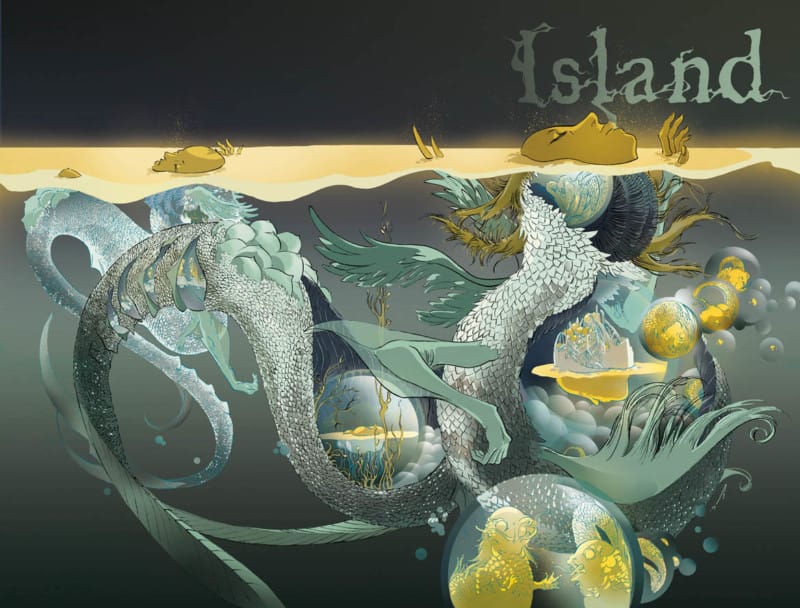 CV: What are elements of your creative process that you feel are more specific to you? Be it the brainstorming, or drafting, etc.

It took a lot of effort and struggle for me to learn how to ink, and luckily it feels really natural and easy today.

My new challenge is trying to learn how to control watercolors, right now. I fell in love with them long ago, but it’s a really difficult technique, so I’m struggling again quite a lot. Even though, I’ve decided to find a new style with those no matter what.

CV: You eventually came to leave architecture to work on comics full time. Do you have any advice for people who are trying to leave their conventional work for their dream job or general advice for emerging and aspiring comics artists/writers?

ER: First, money is important. It will eventually give you freedom to do what you want. It’s good not to have fears and accept new challenges, but please do it slowly and protect your rights.

Second, comics are amazing, but they’re also very tough sometimes. You’ll spend many hours struggling, working at your table or your computer, alone… once you become a professional. Just try never to forget to have fun doing them. 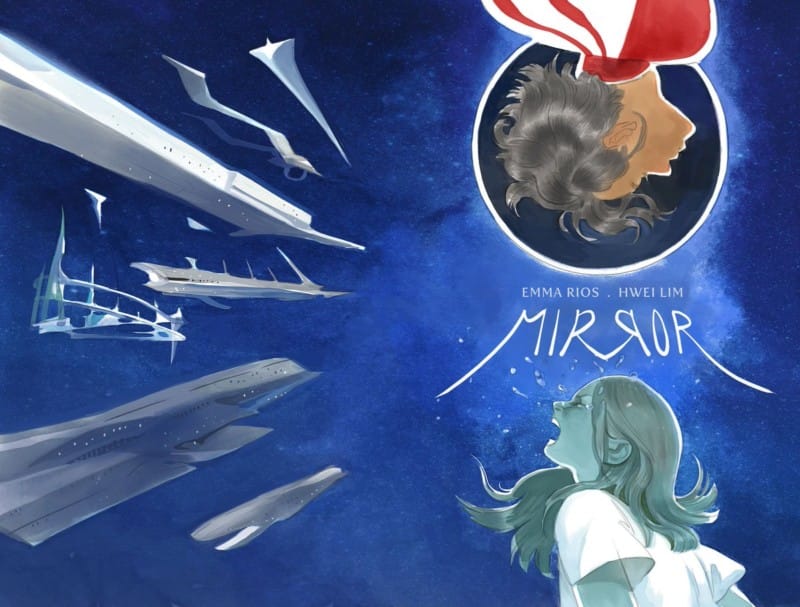 CV: Thank you so much for your time! Before you go, would you like to tell us about some of your upcoming projects or stories coming out? I saw that MIRROR #6 just released, and #7 will be out soon.

ER: This year will be MIRROR and PRETTY DEADLY for me, mostly. It’s quite a lot on my plate already.

The second arc of MIRROR will run from issue 6 to 12, and Hwei and I are so excited about it. In this arc, we’re expanding the little world we were in, during the first arc, to a whole system of planets called The Synchronia. We’ll introduce new characters and new conflicts while we figure out the uncertain future of the former Izrah colonists and our dear hybrid animals.

The third arc of PRETTY DEADLY will take place in the 20s, during the golden age of Hollywood. And it will feel more like a crime, horror story. So, I’m having tons of fun drawing horrible people at the moment.

I feel so spoiled.