The past and present collide in a tale of blood and bad juju that can only make sense in the land of Nilfgaard. Dark Horse’s THE WITCHER vol. 3: CURSE OF CROWS, by writer Paul Tobin and artist Piotr Kowalski, offers a look into revenge and what can follow it. This volume collects issues #1-5 of the CURSE OF CROWS storyline, one heavily developed by the CD Projekt Red’s story team.

READ: Are you a fan of open world games such as The Witcher? Check out our analysis of the genre!

In this collection, we follow the game’s central character, Geralt of Rivia. Geralt is a Witcher (a human with magical abilities who slay dangerous monsters) tasked with hunting down yet another creature. This time around, Geralt brings his partner Ciri along to defeat a Striga (a beast bred by a curse) that is plaguing the town of Novigrad. With a contract to end the torment caused by this monster, Ciri and Geralt set out on their deadly journey.

Expanding on a Vivid World

CURSE OF CROWS does a great job of building on the game’s intricately developed universe. At no point does this comic feel out-of-place from The Witcher universe. Tobin does this by incorporating the familiar flair of these characters on every page. Geralt is his usual milquetoast, bad-ass self and Ciri is over-confident and aggressive. It’s amazing to see how similar these two are to their video game counterparts, which in turn makes it easy for readers to feel immersed in this world. Tobin is stellar at capturing the essence of these characters. 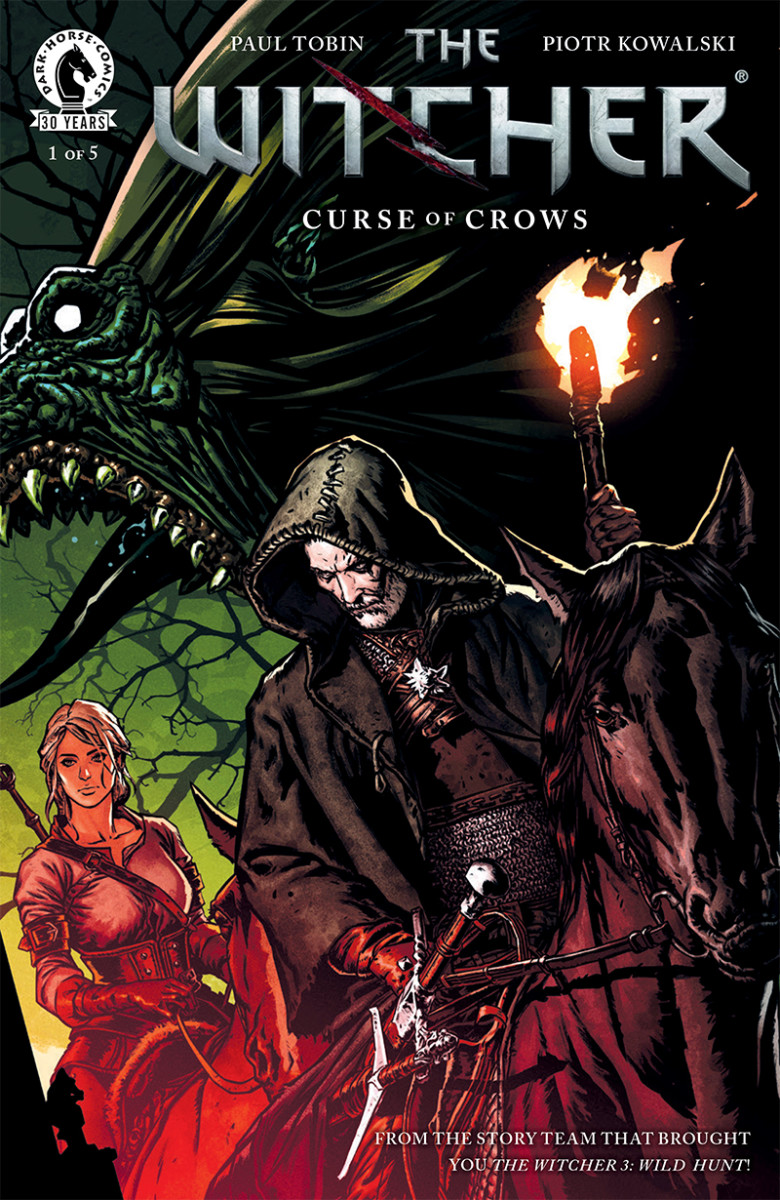 Furthermore, Tobin expertly weaves a plot that hops between both present and the past fluidly. I did not find it remotely difficult to follow the events on each page: it was all so well-connected. When Geralt tells us about his first encounter with the Striga, it comes off as an in-depth history lesson. This lesson is so well-written that we learn all about this creature without giving away the key components that drive its actions.

READ: Eager to learn more about story building in RPGs? Here’s an article where we discuss that topic!

Seeing how the past ties into the present in Geralt and Ciri’s journey makes the narrative continuously engaging. Both parts of the story carry information that is important to each character we come across. Most of the characters in this comic are tied to the mystery of the Striga. As we meet new faces, it’s hard to know who to trust. Tobin’s well-constructed storyline led me to wonder about the curses and how this narrative would come to a close. Throw in one or two familiar faces and this comic legitimately feels like a side mission you would find yourself on while playing THE WITCHER 3: WILD HUNT.

Detailed Sights in THE WITCHER vol. 3: CURSE OF CROWS

Helping to bring out the plot’s aesthetic beauty is Piotr Kowalski. Kowalski’s macabre art style masterfully bleeds through in each moment we see monsters. For example, the Striga’s physical design is hauntingly perfect for the story Tobin has written. Connect this disgusting figure to the environment Kowalski has crafted and you get the dark tone one would expect from a frightful story. 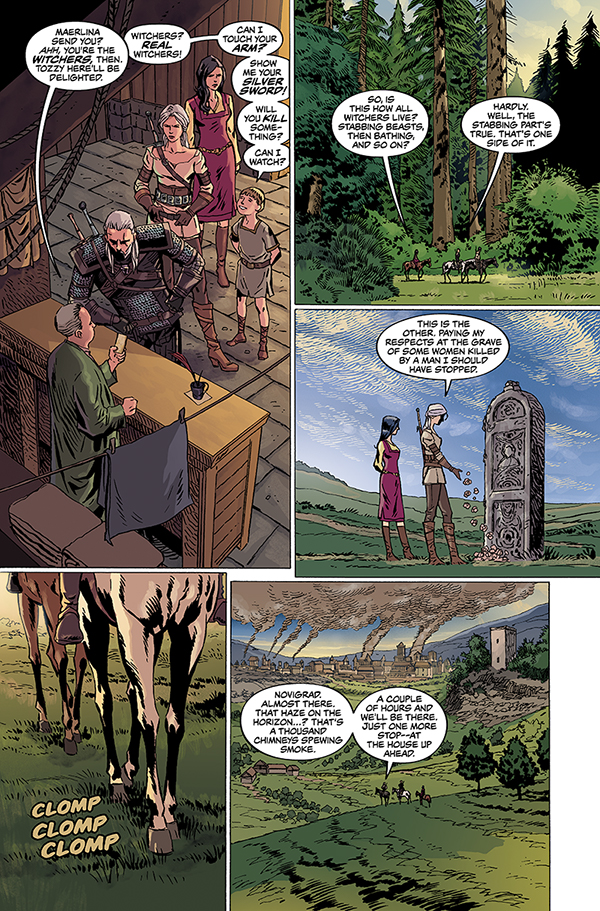 Kowalski doesn’t only give us terrifying settings and characters; he also gives us panels flooded with allure. On their path to Novigrad, we see smaller towns with masses of green forest. During sequences in the night, the panels are filled with shots of moonlight hitting the water. Simple details like this are what make the comic come together as more than just a story. Rather, this is a world filled with both beauty and dismay.

My one concern with this collection is the fact that any newcomers to the world of The Witcher would feel unwelcome. I’m aware of all the little details encompassed in the story because I’ve played the game. I knew the origins of Witchers and their abilities as well as the massive world I quested through. To that end, I can’t imagine someone without such knowledge being able to fully commit themselves to this narrative.

READ: Interested in learning more about horror’s presence in video games? Take a look at our article discussing how to succeed at making terrifying games!

Overall, THE WITCHER vol. 3: CURSE OF CROWS brings us into a wonderfully tailored tale of revenge. This trade is action-packed, humorous, and loaded with new bits of history that I’m sure die-hard gamers will appreciate.

THE WITCHER vol. 3: CURSE OF CROWS hits shelves near you on June 21st!