WITCHBLADE follows NYPD homicide detective Sara Pezzini. In some of the first issues, Pezzini comes to possess the Witchblade, which is a supernatural artifact. The Witchblade is a gauntlet which forms a bond with a female host and gives them powers to fight the supernatural. Pezzini has a hard time controlling the power of the artifact and keeping it out of the hands of people who shouldn’t have it. How does all of this lead up to this double-sized finale? Let’s find out in our WITCHBLADE #185 Review! 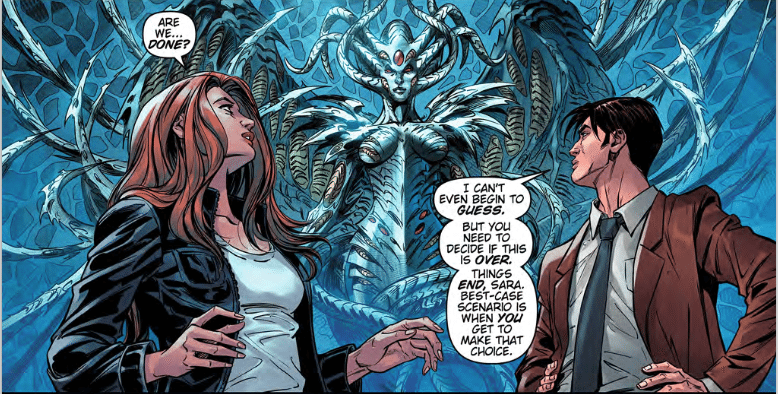 2015 marked the 20th anniversary of WITCHBLADE and #185 was the finale issue. She doesn’t die in the issue, but a lot of loose ends are wrapped up and it comes to a natural conclusion after twenty years. The COO of Top Cow publishing has said that fans should be happy with how the series ends.

LISTEN: Do you love a comic that doesn’t get enough attention? Us too! Click to listen to PODCAST EPISODE #56: TALES OF MR. RHEE

Since the start of the series in 1995 the artists have stepped away from having Pezzini scantily clad  – though it’s not perfect. There are many pages in the book which feature her or another female character lacking in clothes. This does not mean the art is not beautiful – it is – it just means that these unnecessary nude scenes sadly take away from that. However, with that being said, the story and premise are wonderful.

The panel above is one of the funnier moments in the issue. It’s just light-hearted enough to make you chuckle, without taking away and of the actual story itself – plus, who doesn’t have punching a vampire on their bucket list?

After twenty years, a tv series, anime, manga, and novel, I think that the comic came to a conclusion nicely and made sense for the character in the context of the overall story. Pezzini didn’t die, which is always good, and it left the ending open-ended, so that another woman can pick up the gauntlet and start fighting against the supernatural.

If you loved that open-ending, then you should definitely pick up SWITCH. Originally a webcomic by Stjepan Sejic, SWITCH takes classic lore from the WITCHBLADE universe but puts the gauntlet in the hands of a teenage girl. SWITCH is also published by Top Cow.