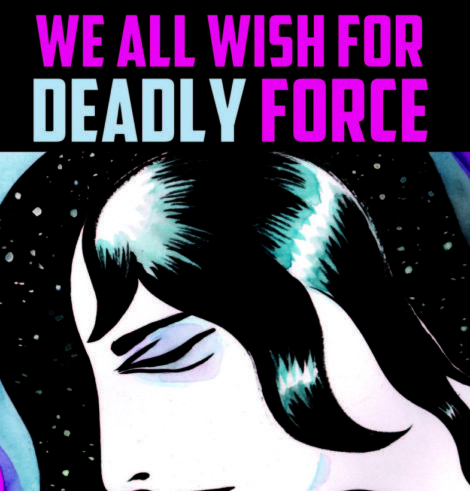 Leela Corman’s collection of short stories WE ALL WISH FOR DEADLY FORCE is an honest and unflinching look at Post-Traumatic Stress Disorder (PTSD), oppression, sexual assault, motherhood, and loss.  She opens with the autobiographical story “The Wound That Never Heals,” which is about her struggles with PTSD after the loss of her first child. This is one of the most vulnerable stories in the collection, told through gorgeous watercolors that could stand on their own. Corman’s prose switches between a scientific account of PTSD to her own personal experience, making it both clinical and poetic. This technique was a reminder that while we can understand what PTSD does to the brain it doesn’t mean we understand what it does to the person.

In “It’s Always Been Here,” Corman continues exploring the theme of motherhood and loss, but this time, she moves away from her personal experiences. Corman centers this story around a site of worship and uses it to show that the human experience does not change even if gods and religion do. Women throughout history come to this site, and whether they pray to Aphrodite or the Virgin Mary, their feelings of loss, failure, and hopelessness remain the same. The piece is in black and white with just one circular panel for each page, which gives the sense that we are looking into the past through a peephole. It feels as though we are getting to witness something we normally wouldn’t be allowed to see, which is exciting because it’s giving women more of a voice.

READ: We review MALEVOLENCE, a story inspired by Irish mythology.

Even though Corman only provides a glimpse into these women’s lives, I felt invested in each of their stories. Corman is adept at conveying a lot of feeling and meaning in each fragment, and she brings the pieces together nicely at the end. It’s a powerful piece with a powerful ending because, despite the site’s significance, it is ultimately forgotten along with these women’s stories. 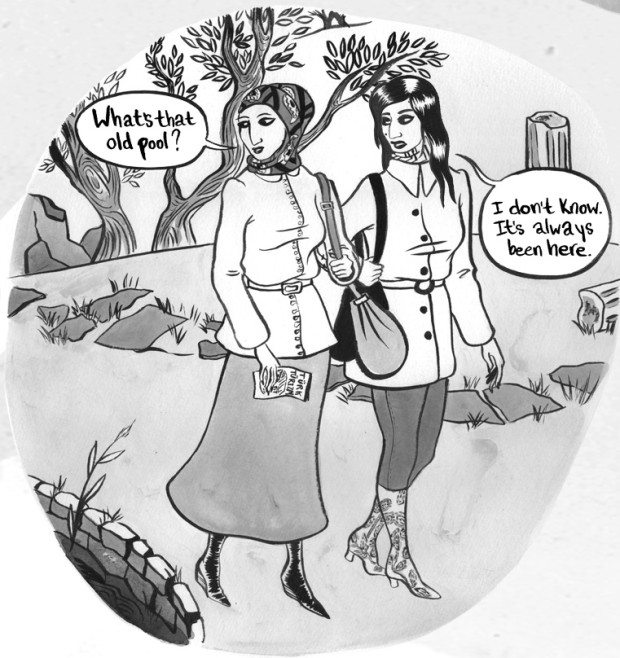 All of the stories are strong, but one of the strongest is “Luna of Cairo,” which is about an American woman living in Egypt as a bellydancer on a tourist boat. Luna’s account of life is both optimistic and disturbing. At times she downplays some of her experiences. For example, when Luna first goes into detail about some of the problems in Egypt she starts with, “Life in Egypt is complicated. For example, the traffic. For another, the human situation.” We soon find out that the traffic is nothing in comparison to the human situation. Luna’ resolve is definitely one of the highlights of this story; her unrelenting optimism makes the human situation in Egypt feel conquerable. Another one of the story’s strengths is the fact that even though “Luna of Cairo” is a foreigner’s experience in Egypt, the narrative is concerned with the struggles of all women in Egypt.

READ: Are you a Miyazaki Fan? Check out our piece on feminism in Miyazaki films.

Corman uses the “The Bellydancer’s President,” to further delve into the experiences of Egyptian women, and she doesn’t shy away from depicting sexual violence. In fact, it was jarring to see something as ugly as gang rape depicted in this way because Corman’s art is truly striking. Normally, I would turn away from a scene of sexual violence, but Corman’s art had me so glued to the page that I couldn’t look away. In this way, she forces the reader to really think about the issues she’s discussing. The only weakness in “The Bellydancer’s President” and the other lengthier stories is the fact that sometimes the art and words looked cluttered, which made it hard to follow at times. However, it’s only a small issue.

Overall, Corman does not reduce these women to victims, but instead she points out their strength as survivors. Luna refuses to leave Egypt, and the Egyptian women unite to elect a leader who will protect them. Furthermore, there’s a message of perseverance in all four stories that sums up the whole collection. Every piece in WE ALL WISH FOR DEADLY FORCE is about hopelessness in some way, but they also contain a promise of progress. Corman’s work is a gorgeous portrait of some ugly topics with a message of hope under the surface.