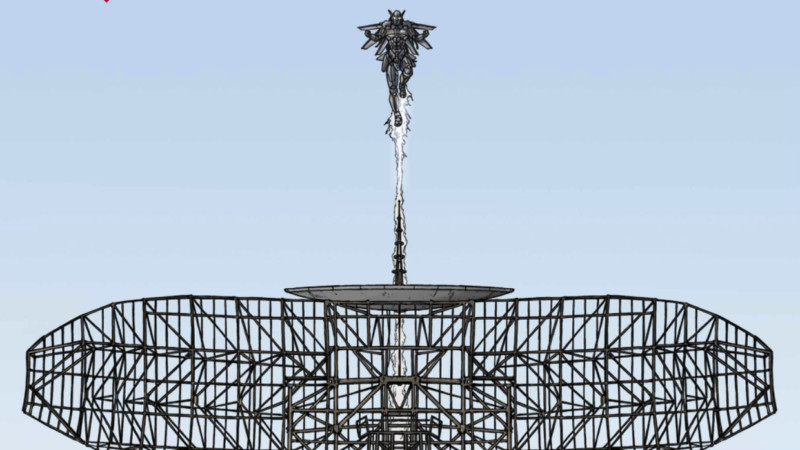 THE WILD STORM #4 is another piece of the puzzle in DC’s sci-fi espionage thriller. Warren Ellis and Jon Davis-Hunt are moving this new series forward one step at a time. THE WILD STORM #3 ends with a climactic battle that concludes in the beginning of THE WILD STORM #4. This month’s issue isn’t the action packed killing spree of #3, but it shows more of the humor and intriguing character dialogue that Ellis is known for.

Picking up from the end fight of THE WILD STORM #3, the first five pages carry some of the best artwork of the series yet. The first page sees Cole blast two IO Black Razors in the head and Angela blast out of the building in her suit, a brutal beginning that peels apart the cast of characters so far. Angela Spica crashes into the ocean after escaping the battle. Adriana, Cole, and Kenesha transport out of the scene after pulling a piece of shrapnel out of Adriana’s skull, reviving her before the building blows up.

Post-fight we see Miles Craven watching, who is shockingly younger in this incarnation of THE WILD STORM compared to the older series.  He leaves his office into his suite where he recaps with his boyfriend about the situation. Here we get some insight and connection to characters that then leads us to Henry Bendix. Bendix is transporting into his institution barking orders and threatening his staff which lets us know, he has power. Walking to an isolated room with his assistant, Bendix relaxes and lets down his tough guy role. Also, the end of this scene it is revealed that Bendix is living and watching all from the stars above. Some of the more humorous parts of the story lie within the character dialogue here. The transition out of this scene holds one of the most badass pull-away shots of a space station ever.

The issue ends with Michael Cray shocked at some new power and accepting he has some crazy brain tumor. In the final pages, we see Angela Spica walking down a highway after last seeing her crash into the ocean in her “transkeletal drysuit”.

READ: Want more of THE WILD STORM? Catch our review of issue #2 here!

One thing that needs to be addressed is the amazing artwork from the past four issues. Warren Ellis is doing an interesting job on the build-up of this revamped universe. He’s making these new (to most readers) characters easy to grasp and understand so far. Jon Davis-Hunt needs applause for making these dialogue filled issues interesting with his artwork style. His work includes titles such as JUDGE DREDD and Vertigo’s CLEAN ROOM.

Davis-Hunt has a very clean style, which makes sense for a book like this. There are more intimate moments going on and his non-flashy approach makes the dialogue flow quite well this way. His action and gore are on point when they occur and it stands out very well from other moments. There are two crucial scenes that stood out during THE WILD STORM #4. One was Angela’s crash down into the ocean, which normally might be basic. Davis’s detail in her suit, the horizon in the distance, and the splashdown were mesmerizing. The pull away shot from Bendix’s ship takes up about 3 ½ pages. It’s cinematic and lets your stomach drop a little each panel as the massive and epic space station is unveiled.

This book is going places, and they have the right team working on it. We’re all excited to see how this revamped universe continues to grow and expand into the rest of THE WILD STORM. What’s great is the reader really does not need to have any previous knowledge of the series or titles that came before it. Picking up from the start of this series is all you need. Through thick dialogue or fast paced action, Ellis and Davis continue to keep the story interesting and fresh.