In 2009, video game company Incognito Entertainment (Incog) closed due to staff departure in forming their own game development studios. Incog, known for its TWISTED METAL series, had one forgotten game that stood out: it was WAR OF THE MONSTERS (WOTM).

WOTM, first released in 2003 on the PlayStation 2, never did see a sequel come to light. It did, however, establish a fan base (me included) and became a cult classic that saw the game re-released on the PS3 and PS4 digitally. It also garnered favorable reviews from most critics during the time of its conception with fans demanding a sequel over the years. Some fans even created a “fan-fictional” sequel (kudos to you guys) while others strove for a petition. No matter how much you look at it, a sequel never happened.

A cult classic with the aforementioned results and no sequel? It should have one! However, before tackling this issue, we must first see what made WOTM into such a classic. Let’s have a look! 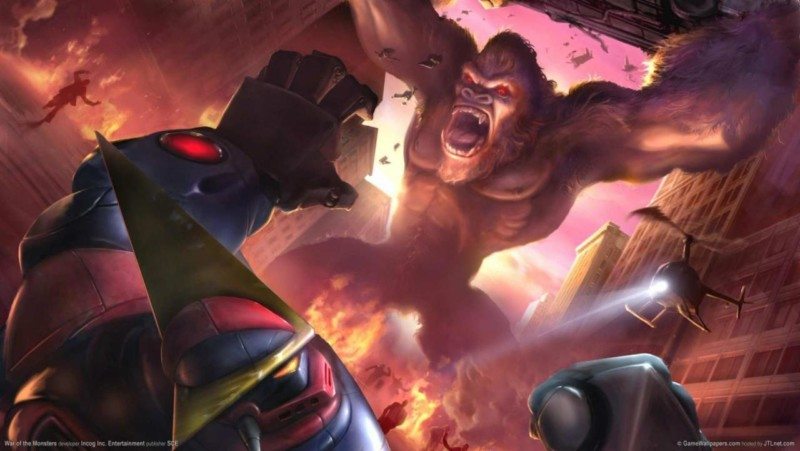 You don’t want to mess with this King Kong counterpart.

WOTM offers monsters that pay tributes to popular giant monsters like King Kong or Godzilla. There is a total of ten playable monsters to choose from. You can wreak havoc as Congar, a homage to King Kong, or nuke enemies with Robo-47, a decommissioned American robot from the Atomic Age. My personal favorite that I grew up with was Ultra V whom I still enjoy playing today (I had an affinity for Japanese mechas as a kid).

Where it shines the most are the monster’s designs and how each one of them plays like. Each one is special in their own way with unique abilities and traits. For example, Preytor (the mantis) is one of two monsters that can fly. This makes the game more enjoyable primarily because monsters have their own strengths and weaknesses based on their abilities.

READ: Kaiju designs are cool, but can they be terrifying? SHIN GODZILLA shows us this!

Wouldn’t it be cool to send your opponent sprawling through a building or two? What about tossing an explosive oil tanker or even cause a massive earthquake to happen? Yes, you can do all of these and much more in WOTM’s interactive three-dimensional stages. 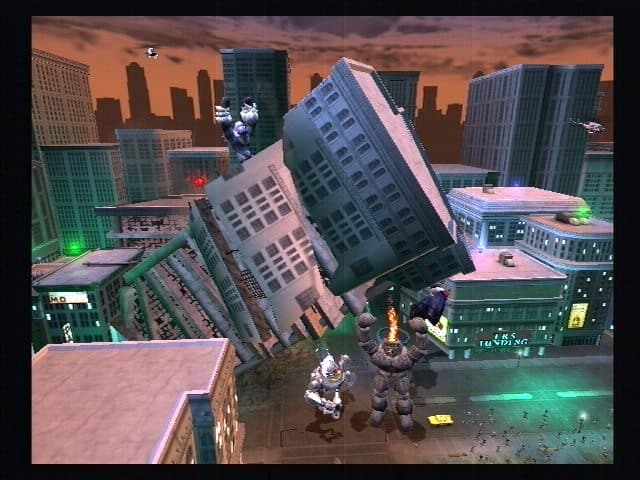 Players can pick up various objects at any stage to use as weapons, such as steel girders, or hurl them towards enemies. There are special objects as well such as the oil tanker that explodes on contact and sets enemies on fire. My favorite (and arguably everyone’s favorite) is the radio antenna or any similar spear object. Why? Spear objects will impale enemies and leave them stunned until pulled out. They can be considered cheap because you can’t block them. You could always try catching them, though!

What’s even more interactive are the stages themselves. Certain ones have its own environmental hazards and benefits. Remember I mentioned an earthquake? One stage particularly allows for an earthquake to trigger if the player destroys particular areas. Another is a nuclear power plant that houses a central reactor for infinite energy and a basin filled with deadly plasma that depletes health in seconds. All building structures can be destroyed to produce even more objects to be used as shields or weapons. This adds more creativity to the game’s combat system. 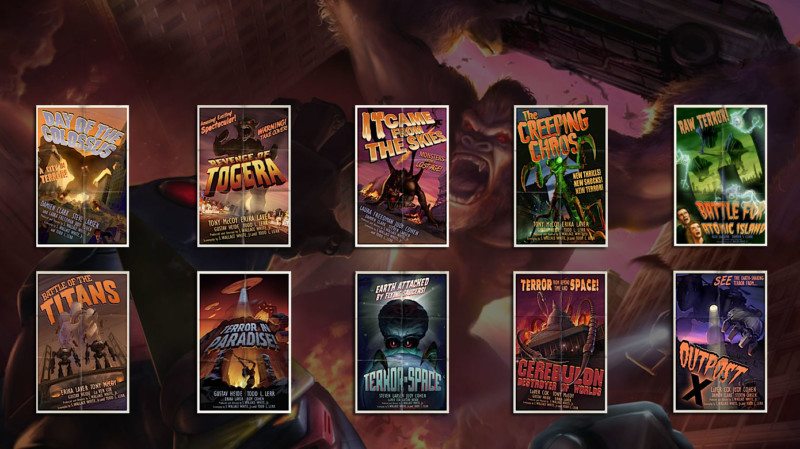 These retro 1950s sci-fi posters will make you feel old!

WAR OF THE MONSTERS pays homage to classic 1950s science fiction films and giant monster movies. It shows its admiration for these classics so well that it’s difficult not to notice and appreciate the efforts the developers have put in the game. What more would you expect from a game that takes place in the 1950s with a central plot revolving around the aftermath of an alien invasion and giant monsters? The answer would be the retro design and presentation of the game itself.

When players first see the game’s title screen, they will be greeted with a drive-in theater menu that displays selectable options and game modes. Pretty creative right? The game conceptualizes itself by making it look like the player is watching a 1950s sci-fi movie at a drive-in theater. Furthermore, the monster designs that clearly praises popular monsters like Godzilla and King Kong accentuates this idea. Even the in-game load screens feature 1950s stylized posters. The game’s intro is also well done that it capture’s the essence of a classic 50s sci-fi film. It should suffice in explaining the game’s plot and further enhances the game’s experience and enjoyment.

CLICK: Are American kaiju films good? Find out about it in Alex’s analysis of PACIFIC RIM and GODZILLA ’98!

The combat system in WOTM is surprisingly decent and definitive. Controls are straightforward with a four-button scheme of light attack, strong attack, grab, and jump. Furthermore, the game offers a simple combo system that is easy to grasp in minutes. To perform combos (up to ten hits), simply string together light and strong attacks. Grabs are self-explanatory with the exception of using light and strong attacks. Pressing the light button while an enemy is picked up will deal additional damage while the strong attack button will have your monster smash them away.

There are also defensive options such as blocking and countering. Should an enemy ever attempt to clobber you with a steel girder, you can perform a counter and steal their object to counterattack. Additionally, you can also use environmental attacks and certain objects in conjunction with combos. There’s just nothing as satisfactory as impaling an enemy with a spear, stunning them and flip kicking them into a toppling building that can crush them. This adds more to the creativity of the game’s fighting system. 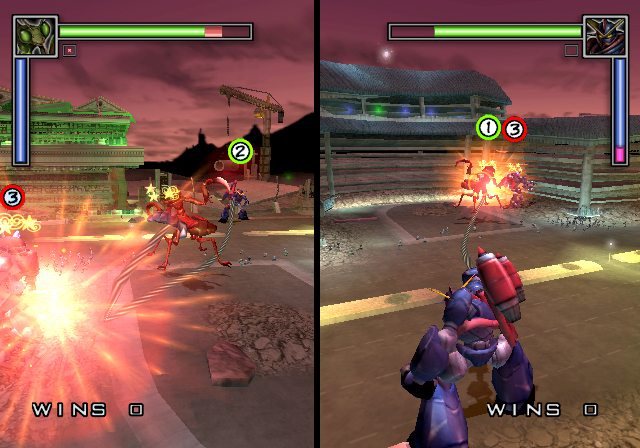 When it comes to WOTM, if you’re not playing against a friend most of the time, then chances are you won’t have much fun later on. You could always settle in for the game’s single player campaign and learn the origins of your favorite monster or brave numerous waves of enemies in endurance (essentially survival), but nothing beats beating the crap out of your friend.

Why two-player? Well, it’s because the three single-player modes the game has tends to get stale after awhile. Adventure mode (literally campaign), aside from the cool looking bosses, doesn’t offer much replayability since you’ll face the same enemies on the same stages no matter what monster you select. Endurance is a little bit more endearing, but that too gets stale if you’ve completely razed the stages’ environment and have already defeated a hundred enemies (can be done on easy). Even if I were to put the game’s AI on hard, it won’t match a human’s intellect and adaptive skill. There’s also no point in playing free-for-all when it’s also available in two-player. What better way than to pummel your friend and two other CPUs to submission!

Two-player is also the only way you’ll ever be able to play the three unlockable mini-games. There’s not much to the mini games except that they offer stylized gameplay focusing on certain game mechanics as opposed to the game’s standard four-way monster beat em’ up style. For example, in “Dodge Ball,” players are limited to jump and grab buttons. All other buttons, besides lock-on and movement, are locked. The goal is to pretty much to use movement to dodge a ball and use grab buttons to either catch or grab the ball.

So why no sequel?

WAR OF THE MONSTERS, with the aforementioned pros, is without its flaws. Besides the mentioned mini games, there is other unlockable content such as awesome-looking costumes and stages that can be bought with tokens. Tokens are accumulated at the end of every mode or stage if playing adventure. However, even with everything unlocked, it’s difficult to return to a game that offers very little replayability (see two player section above). 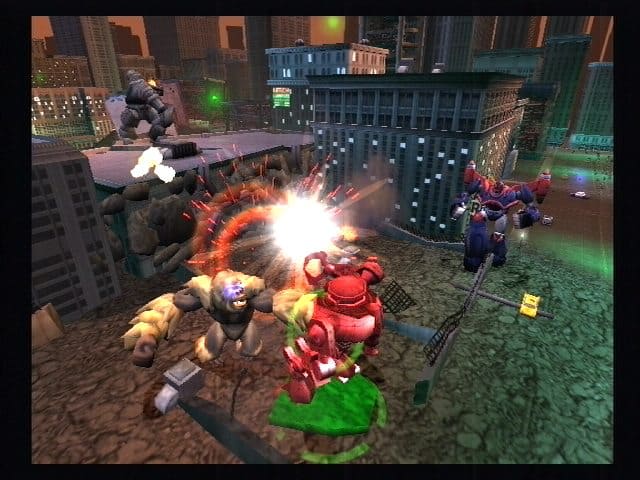 Four-way monster brawls can get hectic with an angle like this.

Not only this, but the camera controls could use some refining. Whenever you’re close to enemies, the camera (see above image) will immediately shift to a bad angle. It’s normally situated behind the monster you control (see image in two player section), so this can be frustrating at times during combat or when you’re trying to jump towards a health pickup or energy power-up. Due to the bad angle, it’s sometimes difficult to tell who you’re actually hitting when you have three monsters together. The monster AI can also get exceedingly frustrating at times too. Whenever they’re low on health, they will run for health pickups. It’s not too much of a problem compared to the camera angle issue since there are tactics to circumvent monsters from running away.

So there you have it. These are mostly the cons of the game. In contrast to the points made earlier, they ‘re not wholly the reasons why WOTM didn’t get a sequel. Rather, it can be summed up by two aspects alone: Incognito Entertainment’s disbandment and unpopularity. If you think about it, these two reasons alone would make more sense. The latter would also possibly tie in with reasons why no newer studios have decided to develop a sequel. The game just wasn’t popular to garner enough attention.

Is a sequel really necessary?

Yes, because an updated story detailing the events of what happened to these WOTM monsters would certainly be incredible. There would be potential for other monsters to be put in as well. The fan sequel, MUTANT INVASION, sets this up pretty nicely. In addition, more stages could be added and online multiplayer can possibly be implemented. One of my biggest gripes also was that the game was limited to only two players offline. Having four players would vastly improve the game’s overall experience. I mean, there’s nothing more enjoyable than battling three other human opponents. Currently, the PS4 version is the closest thing to netplay that people will get with its Share Play function.

CLICK: Are remakes really necessary? Find out why 1986’s THE FLY works out as one!

Overall, WOTM has been a really enjoyable game thus far. Those who have played it during their childhood like me would agree that a sequel can work. There’s so much potential in this game with its classic 1950s presentation and RAMPAGE meets POWER STONE gameplay that can allow for this to happen. Although the game has received favorable reviews, it’s sadly overlooked and overshadowed by more popular mainstream games, but with today’s gaming technology, it can change for the better. For now, if you haven’t played this classic and you’re a giant monster fan, I recommend downloading it. Trust me, it’s a blast from the past indeed! 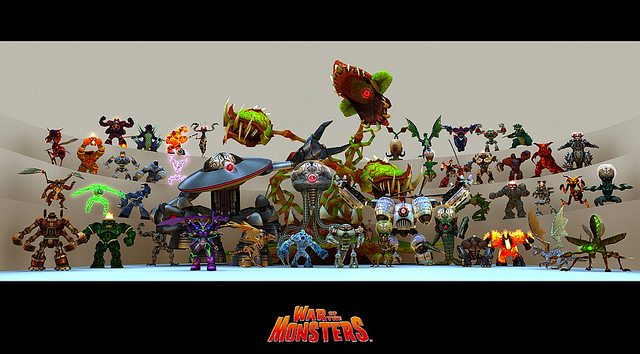