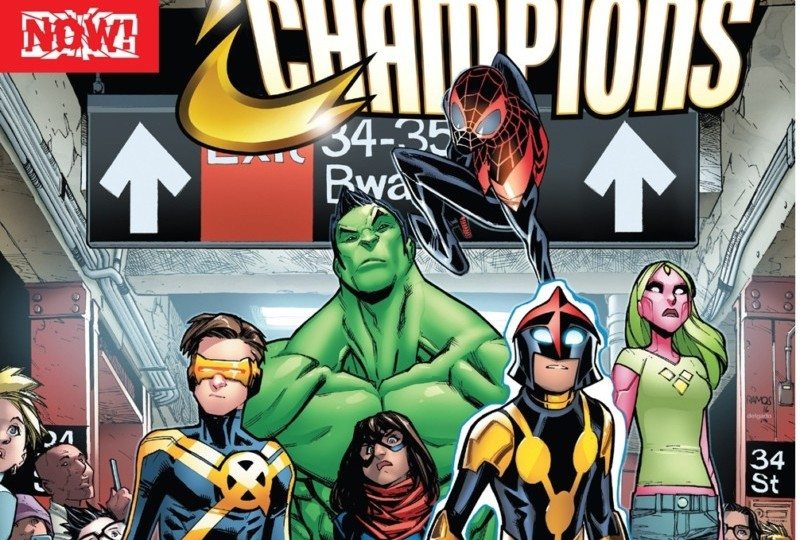 When the term millennial is heard, there are many reactions. A common belief is that millennials are children given too much encouragement by their parents and are now entitled and unable to grasp goals like earning high-paying jobs over time. A variant on that is millennials having the desire to help and the confidence to do so, but no idea how, leaving them overeager and under-experienced. Both cases can be true, but the truth is, most millennials are young people that are trying to find themselves in a very difficult world. The older generations aren’t always kind to their supposed successors and millennials don’t always see a world they want to inherit. They’ve also been swallowed by the stereotypes imposed on them, and don’t always get a voice. It’s even harder as they don’t always get to see people their age demonstrate all the difficulties they face and the desires they might have. Now that has changed, as Marvel has given us the first real millennial super-team, CHAMPIONS, which had its first issue this month.

I was really looking forward to this series; the early press reminded me of DC’s YOUNG JUSTICE (the first comic I read regularly), but it also involved Kamala Khan in what looked to be a leadership role. I was also hoping to get a sense of reaction to the events of CIVIL WAR II, and the issue did not disappoint in either regard. Not only is there a formation of a new team of young heroes, but we’re reminded of how the events of CW II affected the younger generation. Nova and Miles Morales have already quit the Avengers after being forced to fight people they respected because of the agendas of older heroes. Kamala leaves in issue #1 because superhero battles impact the lives of normal people, yet older heroes aren’t interested in dealing with the aftermath. This makes sense after CWII, where normal people had to suffer through another epic superhero argument. Plus, Kamala is a street level hero that constantly sees the everyday destruction that bigger heroes can leave behind. 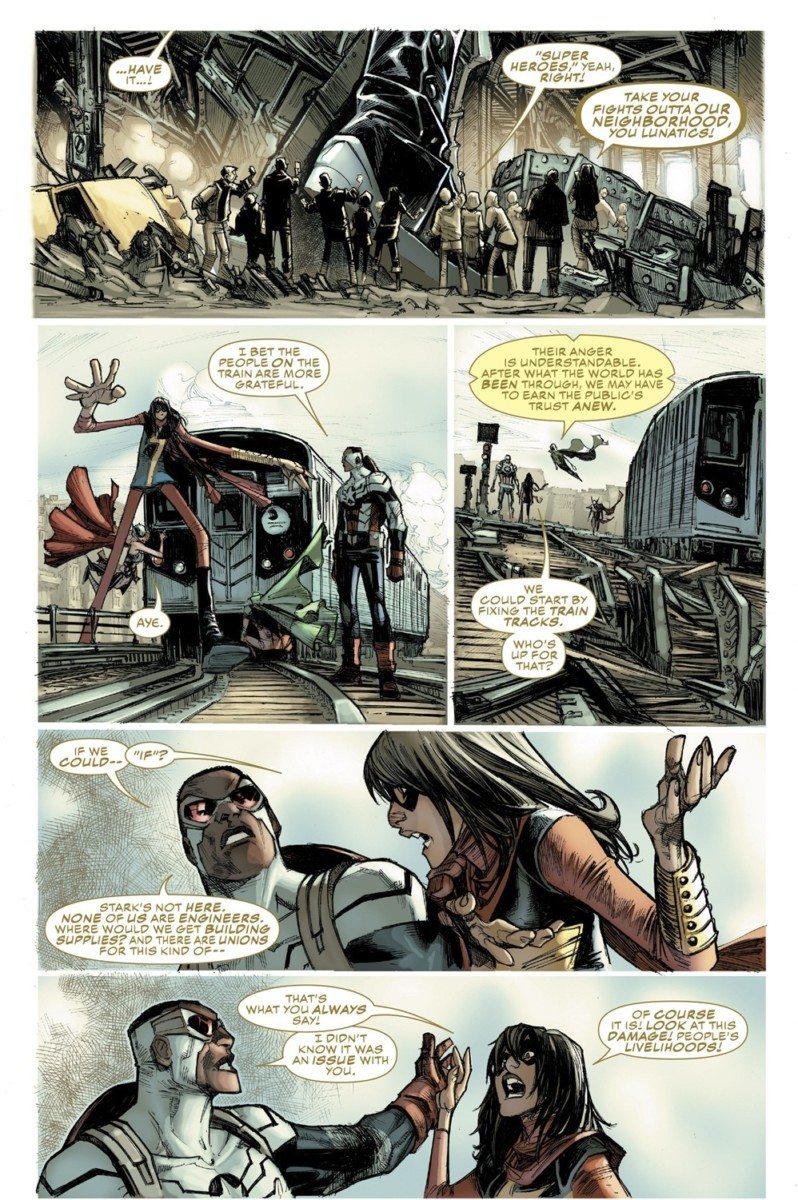 This perfectly encapsulates the millennial/boomer argument. We have Kamala, arguing that as heroes, they need to do more than fight bad guys and walk away. But Cap also makes a strong rebuttal—they don’t know how to fix every problem they cause (imagine Thor fixing a railroad), and they can’t take away people’s jobs and self-reliance. Both are strong points, and it’s easy to see why it would cause a rift.

At the same time, it also places that millennial earnestness on display in both positive and negative terms. Kamala makes her case while dozens of people are cursing out the Avengers for causing damage. It’s in character for her, but it’s also coming while she’s being insulted and told her efforts are not appreciated. For millennials, raised on constant praise and assurance that they can do anything, that kind of degradation is a bitter pill to swallow.  And so, that earnestness emerges when Kamala instantly starts saying the Avengers need to fix things. Sure, she wants to help, but what is she supposed to do?  For all her power, Kamala doesn’t have working knowledge of engineering or any skills that would allow her to fix the area, which Captain America correctly points out.

But Cap isn’t untouchable. The Avengers don’t have the skills to repair the damage they’ve caused. But that doesn’t mean they are helpless. With the superhuman power assembled, they could certainly aid in rebuilding, given proper guidance. But Cap simply says they don’t know how, and they need to leave the jobs to the unions and normal workers. There’s truth to this, but it also echoes how boomers (and subsequent generations) can look at the modern world. Unions and workers traditionally have cleaned up these kinds of events in the past. But the team admits heroes need to earn back trust. Here’s a chance to do so, and they simply fall back on tradition. Kamala might be overeager, but she’s trying to point the team toward a possibly beneficial direction. Refusing to help makes the older generation look content with leaving the cleanup of their work to others. Now, ask any millennial the cause of the world’s problems, and the older generations are the first ones they name. After all, millennials weren’t around to pollute the earth or ruin the stock market for all these years.

The formation of the Champions appears to be more attempts to prove that.

The earnestness of Kamala and her teammates shines through here, as they promise to show the older heroes how to do things the right way. But it is also demonstrated in their actions to do so. The Champions save miners and then break up a human trafficking ring. While these are very noble goals, they don’t paint a clear picture of what the group wants to do. Are they rescue heroes? Do they fight street crime? If they want to remind the older generation these things exist, great. But they don’t seem to have a focus on just what they want to do yet.

Then there’s the issue of whether or not they have the right to show up older heroes. If the Champions’ purpose is to show a better way to protect the world, directionless heroics aren’t it. This is the group really doing the same kind of heroics they’ve done before. Yes, they’re noble goals and shouldn’t be ignored by older heroes. But heroes like Cap and Thor deal with alien invasions, super-villains, and even greater threats. Are the Champions saying the comparatively small crimes they deal with are more important? It may be a reminder to the older heroes, but in their eyes, these are kids with far less time in the game trying to tell them what do. The Champions may be able to speak, but that doesn’t mean the older generation has to listen yet.

READ: Our review of the final ALL-NEW ALL-DIFFERENT AVENGERS

If all of this makes CHAMPIONS seem unfocused and overeager, well, that’s the point. Because that’s what makes this comic so important for millennials to read. At its core, CHAMPIONS is a reflection of the millennial struggle—proving that they and their views are valid, finding their way as they do so, and dealing with a parent generation that seems stagnant and out of touch. After reading the issue, it’s easy to envision the heroes’ successes and failures in the coming months. More importantly, it’s fascinating to imagine how they will deal with those successes and failures. Will they build on the success they’ve earned here and be an inspiration? Will the older generation support them or see them as junior heroes getting too big for their britches? What will happen when they encounter their first failure? Whatever the answers, this is a chance for millennials to see heroes their age dealing with issues they understand and hopefully be inspired by the solutions they see. Ideally, this series can show them proving themselves to people that doubt them, which is encouraging to any generation. In the best case scenario, it can lead to that elusive middle ground where both generations try to learn or relearn something from each other and give readers something to emulate. If CHAMPIONS can do that, it will have a very important message for readers to hear.