She’s beauty. She’s grace. She’ll punch you in the face.

Looking back, I was first introduced to America Chavez in the pages of the 2013 Marvel NOW! trade edition of YOUNG AVENGERS Volume 1 written by Kieron Gillen and illustrated by Jamie McKelvie (both of whom are the creators of the series, THE WICKED AND THE DIVINE). The moment I saw her it was fan devotion at first sight.

Raised by two superhero mothers who created a Utopian dimension for her, America Chavez, endowed with superhuman strength and endurance, took the initiative to leave her home world to travel to other dimensions and fight the various injustices along the way.

There’s a lot to love about this character. America’s powers literally involve kicking her way into new dimensions and traveling throughout the multiverse. She refuses to take garbage from anyone, whether it be annoying quasi-villains like Loki or self-important heroes whose egos she doesn’t mind knocking down a peg or two. She is multilingual, possesses an incredibly sharp wit, and has fantastic one-liners like: “[I’m] your ticket to the Multiverse, princess.”

With her solo series having made its debut this month, the timing of this comic and the focus on this particular character in our current political climate is now more important than ever.

READ: Did you read AMERICA #1 yet? Here’s our review!

America Chavez is officially the first queer woman of color to headline a solo Marvel series. While stealing the spotlight in the panels of team-oriented comics such as the YOUNG AVENGERS or ULTIMATES, America finally has her chance to shine on her own as an individual crime fighter and feminist badass, learning what it means to be a hero on her own and all that it entails. Not only will this comic be revolutionary for the expansion of the Miss America legacy, but it’s also a positive trend in Marvel towards focusing on diverse titles, reflecting the broader reading audience in general.

Gabby Rivera, author of the bestselling queer YA novel Juliet Takes a Breath, has signed on with Marvel as the writer for this series. Not only is she an accomplished novelist but Rivera also identifies as a queer Latinx woman. Though these aren’t necessarily the only basis for her or America’s existence, they add valuable authenticity and credence in a comic book universe that’s often written for and by straight white men. Despite its several amazing qualities, mainstream comics are still pretty much a white boys’ game, neglecting the many brilliant diverse voices who can add their own experiences and influences toward creating richer, more empathetic material.

Marvel has undoubtedly produced some phenomenal female characters. Heroes like Hellcat and Ms. Marvel are endowed with strength, invulnerability, and a general lovability that has ensured their success and popularity as title characters. Within the realm of representation, however, it’s often forgotten that characters can be more than just one thing and can come from backgrounds in which there is a juncture of different identifications regarding race, background, sexuality, etc. America Chavez’s inclusion as a major character — as a queer Latinx woman — in the Marvel Universe, and comics in general, not only validates the existence of multilayered identities whose voices are often lost in broader activist movements but also allows those identities to take center stage and speak out on their own. Gabby Rivera beautifully acknowledges America Chavez’s Latinx heritage through the various usages of Spanglish in AMERICA #1 as well as naming America’s college after Sonia Sotomayer, another revolutionary figure who was the Supreme Court Judge of Hispanic descent and the first Latina judge as well.

READ: Want more LGBTQ+ representation in comics? So do we! Take a look at our thoughts on it! 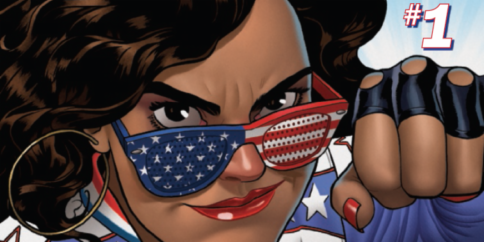 Her name is America. Enough said. In today’s increasingly hostile political environment, various civil rights are under constant threat of being demolished or taken away, we live in a time in which America’s “national leader” and his cabinet have said and done a countless number of disgusting things regarding the very citizens they’re supposed to protect. America Chavez stands as a beacon of hope and defiance to those whose identities are marked as “other” or “insignificant.” The fact that her name is America, and that her costume includes the colors of the American flag, shows a version of patriotism as it should be, rather than what it currently is.

READ: Want more examples of badass millennials? Take a look at our piece on MS. MARVEL!

When millennials are often branded as “lazy” or “self-centered,” accused of only acting towards their own self-interests, America is a young hero who’s willing to stand up and fight for what she believes in and those she wishes to protect, without letting anyone get in her way. When women are branded as the “weaker sex,” with consumers ignorantly assuming that the lack of female-led titles are a result of these titles not selling well, the sheer success and popularity of this female character alone says something different. When the Latinx community is becoming more persecuted, literally with the threat of having a wall built to prevent immigrants from taking residence in the U.S., here’s a Latinx heroine who punches ignorance right in the face. America Chavez is here. She’s young, she’s queer, she’s Latinx, and hopefully, she’s here to stay.