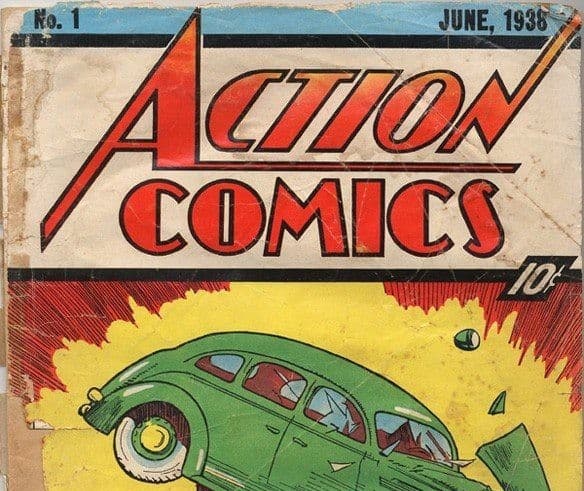 How many 77-year-olds do you know who are able to leap tall buildings in a single bound?

In April 1938, ACTION COMICS #1 hit the newsstands – and with it came the birth of the super-hero era.  In August 2014, a copy of this issue in “pristine” condition officially became the most expensive comic in the world – with a winning bid for no less than $3,207,852.00!  It says everything that bids actually started at the $1 million mark (CNET)!

There’s something immortal about Superman – he remains the world’s most iconic super-hero, appearing across media in radio shows, cartoon shorts, long-running television series and, of course, in movies.  But what makes Superman so iconic?  How is it we’re still reading the adventures of Superman, no less than 77 years after ACTION COMICS #1 was released?

THE CONTROVERSIAL IDEA OF THE ‘SUPERMAN’ 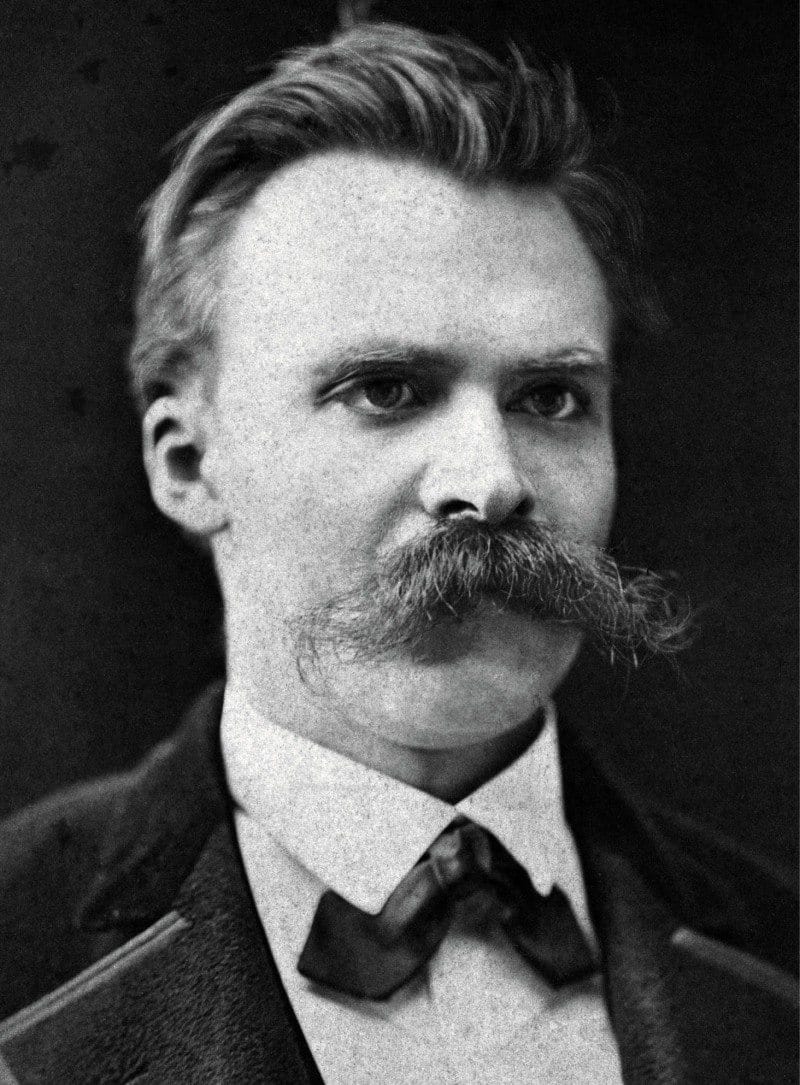 In 1883, Friedrich Nietzsche coined the term ‘Ubermensch’ (German for ‘Overman’, ‘Superman’, or ‘New Man’ as the concept became known in America) as an alternative to Christianity.  Christianity’s other-worldliness and belief in the soul was contrasted with the Ubermensch’s passion for shaping this world and his strength of the body.  Nietzsche established Ubermensch as a goal humanity can set for itself.  And so Social Darwinism came into play, taking the evolutionary concept of ‘survival of the fittest’ and applying it to questions of society and individualism.

Although Social Darwinism isn’t too prominent a force in the modern age, in 1938 it was all the rage – and not just in Nazi Germany, where the philosophy found its ultimate twisted fulfilment in the concept of the Aryan ‘Master Race’.  The links between Social Darwinism and Nazism, as well as increasing awareness of the importance of culture in shaping human interactions, have pretty much led to a global rejection of Social Darwinism today.

But Superman has to be placed in his context.  Jerry Siegel and Joe Shuster hadn’t come up with their icon overnight – the earliest concept of the Superman was of a bald-headed villain who possessed telepathic powers and became convinced of his right to rule the world!  It’s no coincidence that the iconic Superman developed not powers of the mind, but powers of the body.  Likewise, it’s no surprise that an early title for Superman was the Man of Tomorrow – a figure who pointed the way to a better, utopian world.

In the comics, Superman visited New York’s 1939-1940 World’s Fair (one of the Fair’s catchphrases was, “I have seen the future”); and in the real world there was even a Superman Day at the World’s Fair, at which an actor played the part of Superman!  That optimistic utopian dream would be crushed by the harsh reality of World War II, leaving that aspect of Superman’s character somewhat anachronistic.  In spite of which, intriguingly enough, the latest SUPERMAN series has focused in on it – right down to having an arc entitled “Men of Tomorrow”.

Superman’s cause would change over time, too.  Before World War II, Superman fought “a never-ending battle for truth and justice”; the 1948 serial established him as fighting for “truth, tolerance and justice”.  It was the radio show, running from 1940 to 1951, that came up with the phrase “truth, justice, and the American way,” which has become inextricably linked with Superman.  Interestingly enough, that same radio-play was responsible for establishing that Superman could fly!

“In Autumn 1942, fans of the radio show became the first to hear about Superman’s battle for “truth, justice and the American way.”

At that time the war was not going well.  Field Marshal Erwin Rommel was sweeping across Africa, and the German Army was driving toward Stalingrad.  The Japanese had been turned back at Midway but they were still invading Pacific islands.  Americans were all fighting for the American way.  Why shouldn’t Superman?

As the war turned in our favour, though, the additional phrase didn’t seem as necessary.  By 1944 it was gone, and for the remainder of the radio show, Superman devoted himself to the fight for tolerance.

It took the paranoia and patriotism of the Cold War era to bring back “the American way” – this time in the “Adventures of Superman” TV series, which ran from 1952 to 1958.  Every week, young baby boomers were greeted with the phrase as they sat down to watch the Man of Steel combat crooks and Communist spies.”

The point is, though, that – by accident rather than intent – Superman has moved beyond his philosophical origins.  Readers don’t link him to a morally questionable philosophy, but rather to the American way; his fight is not to overwhelm and rule, but for truth and justice.

SUPERMAN AS A TREND-SETTER

Surely a part of Superman’s mystique is the fact that he was the first super-hero – in a very real sense, he was the trend-setter.  In his book SUPERHEROES: A MODERN MYTHOLOGY, Richard Reynolds looks at some of the aspects of super-heroism established within ACTION COMICS #1:

To be sure, these concepts have been subverted countless times – but those very subversions indicate the strength of the patterns established by Superman.  As the trend-setter, every super-hero onwards has walked in the shadow of Superman.

Part of Superman’s mystique is that he’s been shaped by more than just comics.  Here’s just a quick sample of the media he’s been involved in:

The first super-hero to hit the news-stands, Superman has taken advantage of modern media in a way no other hero has – not even Batman, his nearest rival!  Since 1952, there have only been 14 years without a Superman series of some kind. The longest non-stop run was between 1988 to 2011, an astounding twenty-four years of continuous new content, including the massively-popular TV series LOIS & CLARK: THE NEW ADVENTURES OF SUPERMAN and SMALLVILLE.

Ironically enough, though, another of the reasons for Superman’s enduring popularity is a reason I’m not always a fan of DC.  In 1985, DC launched their famous “Crisis on Infinite Earths” plot, the first in a succession of massive reboots.  Whereas Marvel have to deal with Marvel Time, and struggle particularly with the need to keep certain franchises ‘ever-young’ in a continuous timeline, DC just press the reboot button.

This means that any abiding image of Superman can be returned to with ease.  In the age of LOIS AND CLARK: THE NEW ADVENTURES OF SUPERMAN, Clark and Lois can be married; in the age shortly after SMALLVILLE, Superman can be a younger, less seasoned hero.

And what’s more, DC can respond to societal change.  In the “Grounded” plotline, Superman travelled across America on foot, questioning what it is to represent the ‘American way’ in a postmodern, post-Iraq world.  This led to a moment of controversy in ACTION COMICS #900, in which he renounced his American nationality.  In-universe, the idea was presented in logical and political terms, but it was complemented by a single telling panel: 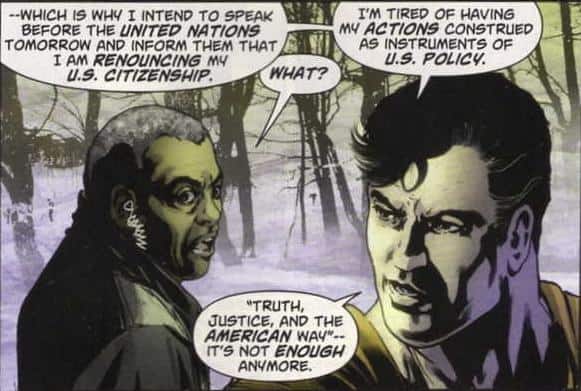 In this, Superman was only reflecting a change in society – a loss of self-confidence in the US, and a growing difficulty with the very concept of the ‘American way’.  And the same kind of iconography lies behind the ‘Super Flare’, the new power that was finally explained in 2015. 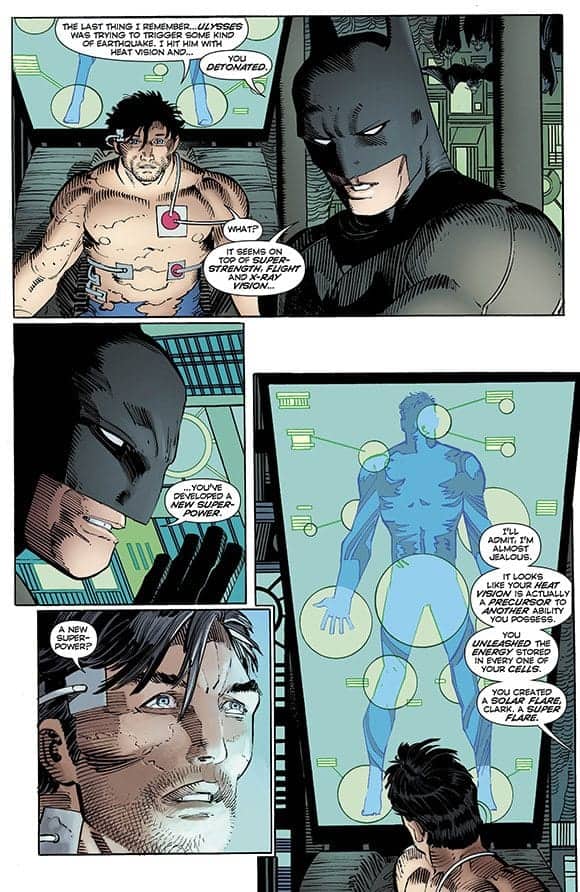 Consider the symbolism; Superman’s devastating new ability is the power to release a massive burst of energy, one that destroys all around him and completely depletes his cells of power.  And this power has debuted at a time when, having kicked off military action that it seems unable to complete, the United States is finding that it is exhausted, tired of war, and near its limits.  The new power seems to be appropriately symbolic.  The lack of control – and thus the inability to know the impact of using this power in advance – also seems culturally appropriate.

But again, if that plotline makes changes to Superman’s canon that prove unpopular, DC need only to wait for the next “Crisis”.  It gives DC the freedom to take risks, albeit a freedom that they haven’t always exercised.

Now, let’s acknowledge that, during his life as a super-hero, Superman hasn’t always been a boy scout.  In fact, the early Superman was a ‘Champion of the Oppressed’ with an attitude that’s very different to the Superman we know and love – he can threaten to shoot someone, to let a plane land on crooks if they don’t confess, and tell an enemy she’s lucky he doesn’t crush her with the ease he crushes her gun!

Again, it was the radio show – and World War II – that transformed Superman.  He became a paragon of virtue, and has remained so pretty much ever since.  Ironically, though, Zack Snyder went back to this older style of Superman in 2013’s MAN OF STEEL movie, and this looks to be continued in BATMAN VERSUS SUPERMAN: DAWN OF JUSTICE.

Perhaps the most interesting review of MAN OF STEEL was by CinemaScore, who noted that those under the age of 18 and those over the age of 50 gave it the most positive reviews.  The former likely have less emotional history with Superman, while the latter may have an emotional connection that goes back beyond the Christopher Reeves movies.  However, this raises a troubling question; whether DC’s reinvention risks alienating the fans they have gained through the nonstop Superman media years of 1988 through to 2011.  That, in turn, casts doubt upon their entire approach to the cinematic universe, suggesting it risks lacking the wider demographic appeal of the Marvel movies.

I think that DC have perhaps missed the point.  Sometimes, just sometimes, there is a place for the Boy Scout – the flawless, perfect hero who stands for something and of whom we live in awe.  It is as that perfect hero that Superman will always be remembered, and it is as an icon that he flourishes.  That was best recognised by the “Death of Superman” arc in 1993, which famously featured a tattered cape flying like a badly-damaged American flag. 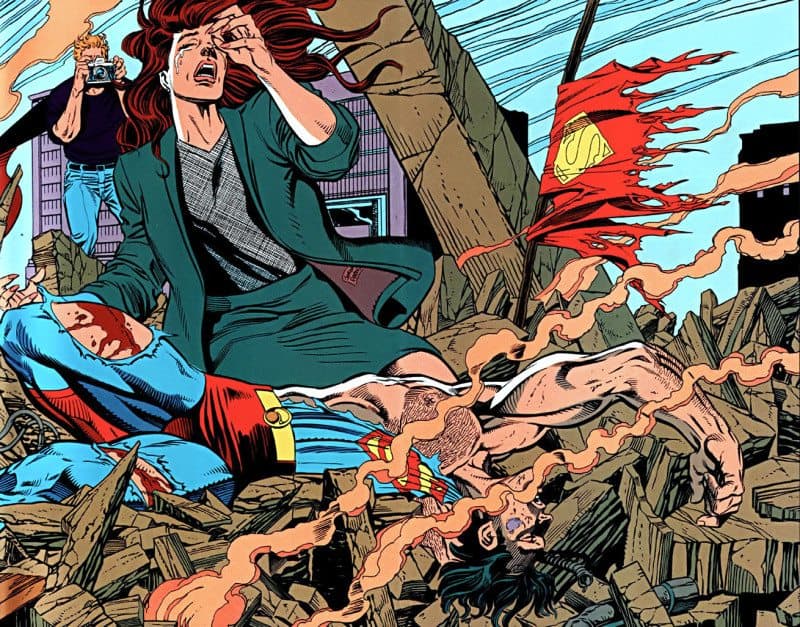 I would suggest that it is because of this iconography that Batman and Superman have become so closely related in the minds of comic-book readers.  The perfect morality and goodness of Superman shines a light on the darker vigilantism of Batman, and shows both characters in sharper relief.  Again, however successful BATMAN VERSUS SUPERMAN: DAWN OF JUSTICE may be in the Box Office, this is an aspect of the drama that DC have sacrificed in order to present a very different Superman.  Whether this was a wise decision is, of course, a matter of opinion.

Still, if there’s one thing that looking at the history of the world’s most famous super-hero has convinced me, it is that this too will pass.  The darker hero will have his moment in the sun, the Superman mythos will absorb what it can, and then it will move relentlessly on to the next iteration.  In twenty years’ time, we won’t be discussing the merits of MAN OF STEEL – we’ll be talking about the latest version of the Man of Steel, whatever or whoever he may be.

And that is why Superman truly endures – because whatever happens, there will always be another version of the Man of Steel.