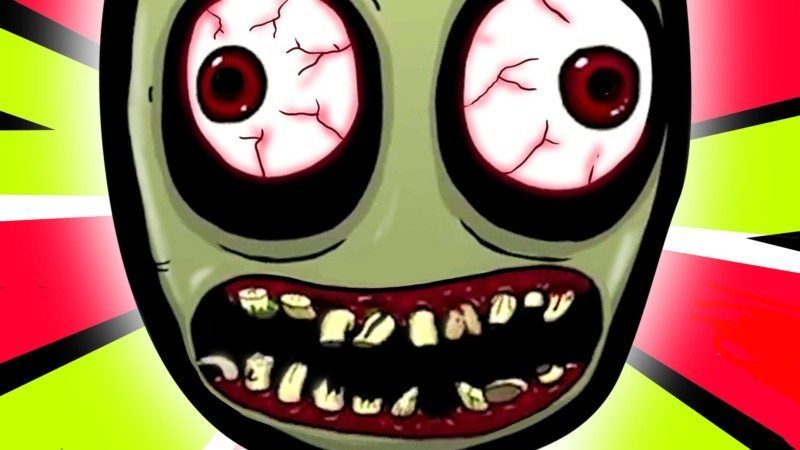 Your pants feel a bit heavier now, don’t they? Now I know what you’re thinking: “Trip, why the hell would you show me this? What is wrong with you? Who would watch something like this?”

Well, apparently 681,000 subscribers along with millions of additional viewers.

So what the hell is going on?

David Firth is one of YouTube’s oldest, most famous, and most successful animators. He’s made a living out of invading the dark corners of your mind, dragging the monsters within screaming into the blinding light of your consciousness. He got his start on the website Newgrounds, where he gained massive popularity with his ongoing series “SALAD FINGERS.” Since then, his videos have garnered millions of views, he has animated music videos for famous recording artists, and has even done some work for the BBC.

READ: Why the hell do people like TIM AND ERIC? Well, let’s take a look!

According to Firth, his work is inspired by, “Dreams. Things that happen around me. Things that could happen. Things that I’m glad aren’t happening. Things that I wish would happen.” His bizarre, disturbing animations typically take place in dystopian European landscapes and usually involve gore, surreal comedy, pop-culture satire, and mental illness. His works are commonly described as disturbing, revolting, incoherent, and downright psychotic.

So why do people love David Firth’s work? What does this mean for art in general? Are we doomed as a species?

If you’re able to walk away from a Firth video with your sanity intact, you’ll notice three primary features that draw you into his world.

The most obvious draw of David Firth’s work is the mystery of it all. Firth makes a point out of adding little details and “clues” to a larger narrative. Some even claim he leaves behind coded messages for people to find. Many wonder if his videos are part of a larger dystopian world—some broken, shattered reality where cruelty and madness rule unopposed. Forums and comments sections are full of theories and analysis, all desperately trying to find meaning in the chaos of Firth’s work.

His most famous series is arguably the most mysterious. “SALAD FINGERS” follows the daily life of a friendly, if disturbed, creature living in a barren wasteland.

Throughout the series, he (or she, according to some) makes vague hints to his backstory, but seems only semi-coherent and could easily be an unreliable narrator. People have theorized that this takes place in a universe where the World Wars never ended, where chemical warfare has decimated the planet and turned the survivors into gibbering madmen. Others think we’re reading too much into it, but that doesn’t stop us from looking for answers.

READ: Marvel or DC? Who the hell cares? Let’s find out!

Firth’s work straddles the line between meaning and mindlessness. Because of this, viewers feel both confused and intrigued after watching his videos. You get the sense that there are answers to be found, that there’s a method behind the madness just beyond your reach, that if you watch one more video you may understand the truth that’s been eluding you. So we trade theories with our friends, we argue with strangers on the internet, we comb every video for the smallest detail, all in an attempt to understand something that may have no meaning at all. That’s the magic of David Firth.

Let’s be honest with each other: one of the main reasons we keep coming back to Firth’s videos is the sick fascination we get out of them. People often leave his videos feeling sick, confused, and anxious to see what he does next. The descent his videos take into incoherent madness is enthralling. It’s no surprise that many of his videos are inspired by his own dreams and nightmares. A perfect example of this is his video “SOCK 5: THREE SKINS WITHOUT MEN.”

Do you feel that cold emptiness in your chest? Yeah, that’s a piece of your soul dying. The video is mostly nonsense at first glance, but there are definitely some consistent themes of selfishness, greed, substance abuse and depression going on here, mixed in with some good old-fashioned British humor. But on the surface, it’s just a straight-up horror show, a gore-riddled fever dream that’s been imprinted on your brain. It’s not going away either. If you’re like most people, you’ll be thinking about this video for at least a few hours. Maybe you’ll tell your friends about it the next day and spread the madness around some more. The shock value makes it impossible to forget.

READ: Is POKEMON: GO good for your mental health? Let’s take a look!

Art intrigues the consumer through its exploration of emotion and ideas. Firth’s work, despite its grotesque nature, is a perfect example of the power of art. If he just spray-painted dirty words on a brick wall we wouldn’t be interested. Shock value on its own doesn’t have lasting appeal. It’s the effort that goes into it, the mystery behind it, the way it forces you to think about and consider things you may find uncomfortable or disturbing. That’s what makes it last, that’s why we keep watching.

Perhaps the best part about Firth’s work is the lack of answers. Most artists of this sort will try to push a message, to use their work as a means of spreading their outlook or to comment on perceived flaws in society. While that’s definitely a component to Firth’s work, it’s not the focal point. There are no clear answers in Firth’s animations. No “aha!” moments, no dissection of the creator’s “genius,” no realization of what the artist is trying to say. These videos respect your intelligence and expect you to come to your own conclusions. Take a look at one of his more recent videos, “THE UNFIXABLE THOUGHT MACHINE”:

Is Firth trying to say that medicine is evil? Or is he satirizing the people who feel that way? Is he attacking the rise of new-age “natural” treatments (“try meditating or eating more hazelnuts”)? Or is he simply expressing the confusion and complexity of dealing with disease?

These videos are exploratory, experimental. Firth is setting you on a journey. Whatever destination you reach is up to you. His animations are horrific journeys into the psyche. They’re a grueling exercise for your brain. They exist to make you think, not to tell you what to think.

READ: How does HOMESTUCK break the rules of storytelling?

Art doesn’t always exist to be pretty. Sometimes it exists to explore ideas, not all of them pleasant or enjoyable. As long as this exploration is compelling and intriguing to the viewer, it’s no less art than anything else. Some say that David Firth’s works are a new wave of dadaism: “anti-art” designed to criticize the vague, often elitist standards of “proper” art, and to challenge our understanding of what art can be. I see the merit of this argument, but I think there’s a bit more to it than that. Firth’s work is more than a criticism of art; it’s a genuine attempt to evoke emotion and inspire creative thought. So, in a lot of ways, Firth’s work is more “art” than anything else I’ve ever seen. If Firth’s stuff is still a bit too crazy for you, no one’s going to judge you, but hopefully now you understand why so many of us can’t stop watching.