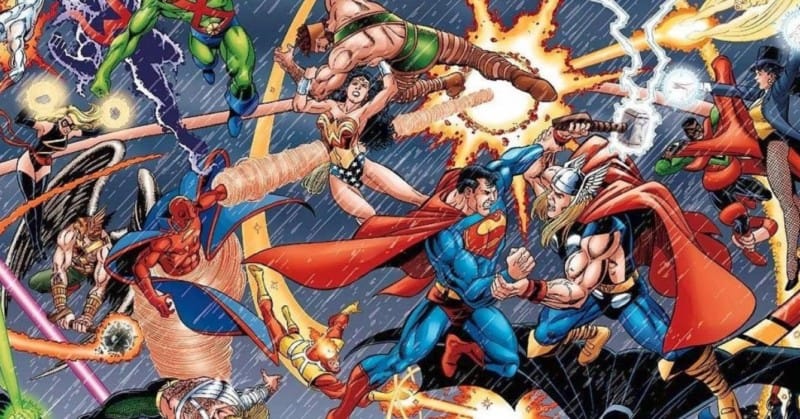 When I was a kid, my favorite toys were LEGOs. I could spend hours shaping pieces into spaceships, cars, buildings: anything. LEGOs are still around now, but they’ve changed somewhat. While there’s still original sets and pieces for kids’ to imagine into existence, but there’s also an increased focus on LEGO sets based on popular franchises. Toy stores are filled with sets based on series from DC, Marvel, film, TV, and other media. I’ve seen everything from the Ghostbuster’s ECTO-1 to the Beatles’ Yellow Submarine.

It’s great for LEGO fans, because now they have the tools to not only bring their favorite fandoms to life, but they can have them interact with each other. THE LEGO MOVIE’s cast was comprised of LEGO characters from all kinds of media, crossing-over and working together. It’s an approach seen in comics as well. Although crossovers are more common among lesser selling titles (GREEN LANTERN/SILVER SURFER), there have also been larger events, such as 1996’s MARVEL VS. DC, which stands as a personal favorite. Not only did the two comic giants allow fans to pick the winners of the various hero vs. hero brawls, but it created one of my favorite moments in comics — when the two gods representing the Marvel and DC Universes end their battles and show each other a sign of respect. 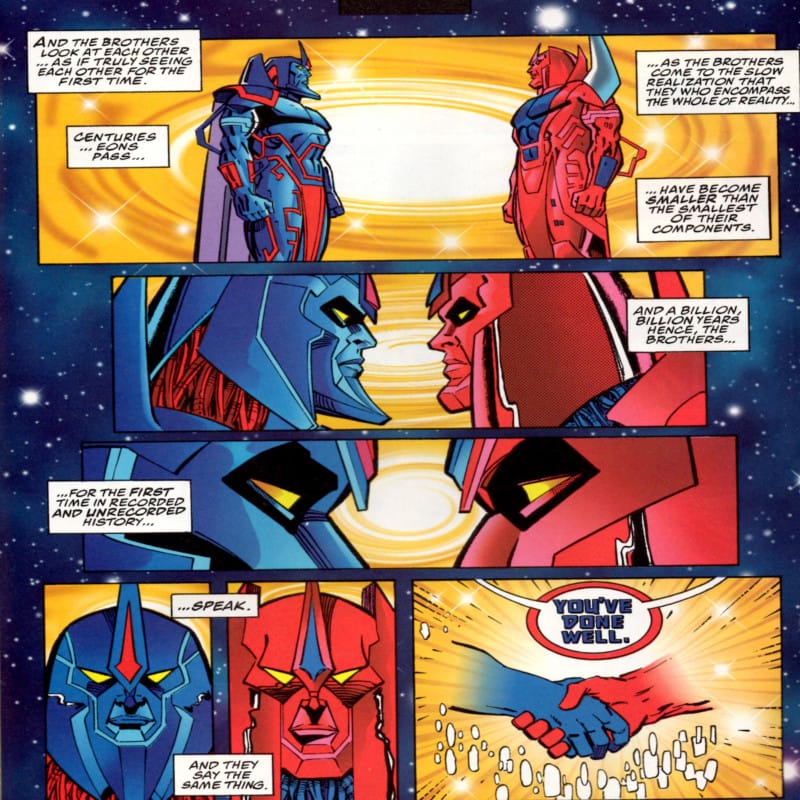 Epics like that one, however, are few and far between now, especially with the increased rivalry between the two companies in recent years. Nevertheless, crossovers across other media, like film, and with smaller comics publishers have continued to grow steadily. Much of this is due to IDW, the comic book company that owns the publication rights to titles like GHOSTBUSTERS, THE TRANSFORMERS, and TEENAGE MUTANT NINJA TURTLES. IDW initially connected those universes with the INFESTATION series, which saw a zombie disease invade the dimensions of multiple iconic franchises. While readers never got to see Optimus Prime and Peter Venkman together (the worlds were always separate, but the threat was the same), it arguably laid the groundwork for what was to come. Since then, IDW has combined some of its worlds with titles like GHOSTBUSTERS/NINJA TURTLES and has also collaborated with DC. Together, the two companies have made STAR TREK/GREEN LANTERN and NINJA TURTLES/BATMAN. DC has also reached out on its own, teaming up with BOOM! Studios for JUSTICE LEAGUE/MASTERS OF THE UNIVERSE and the ongoing JUSTICE LEAGUE/POWER RANGERS.

So with so many crossovers going on in the last few years, it begs the question — why? What is it about team-ups that readers love? First and foremost, it’s a fantasy from childhood. Fans have already imagined team-ups for years in fanfiction. No matter your favorite media, I can promise you sites like Fanfiction.net have already crafted team-ups between thousands of characters and franchises (I’m guilty of it too, but AVATAR THE LAST AIRBENDER and KINGDOM HEARTS are clearly meant to go together). I’ve already mentioned how fun bringing different LEGO fandom sets together is, and the company also had great success with LEGO DIMENSIONS, a video game built around that very concept. Seeing our favorite characters together is reminiscent of the joy we had mixing our toys together as kids. It speaks to our imaginations and lets us envision how these characters might interact.

READ: Why have the Power Rangers endured? Here’s our explanation!

That’s another component of it as well — seeing if the crossover would even work. For my generation, NINJA TURTLES means fun loving turtle teens eating pizza and yelling catch phrases while wearing brightly colored masks. Batman is the dark avenger, the shadowy hero of Gotham City. Surely, they would never be able to function together… 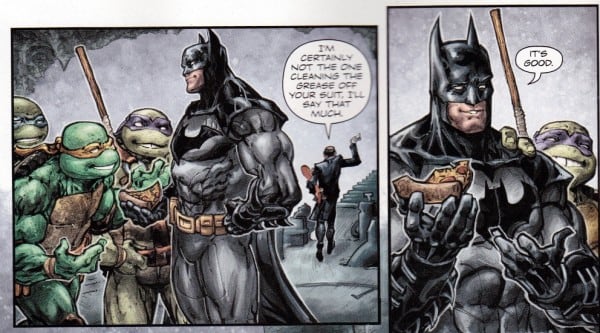 Another question that always comes up: how are these two worlds going to fit together? Stories need conflict, and bringing characters together like this means their enemies usually have teamed-up as well. Going back to BATMAN/TEENAGE MUTANT NINJA TURTLES, there’s certainly a wide range of villains on both sides to threaten the heroes. How writers will bring them together is always a serious question for the fans, because the number of threats against their heroes has vastly increased. Readers wonder what threat is so big that it takes heroes from two different worlds to stop it.

In the end, the biggest question for any crossover, the ones that fans consider the most, is how the crossover will honor their heroes. Crossovers are stories of conflicting ideologies and unlikely partnerships. Because the characters are different, they have to find ways to fit into each others’ worlds, and that can be difficult to achieve. It can be fun to watch the insanity, but not when beloved characters have to be fundamentally changed to fit the crossover. DC has already announced a series of crossovers between the Justice League and the LOONEY TUNES and the early art is well…interesting, at best. 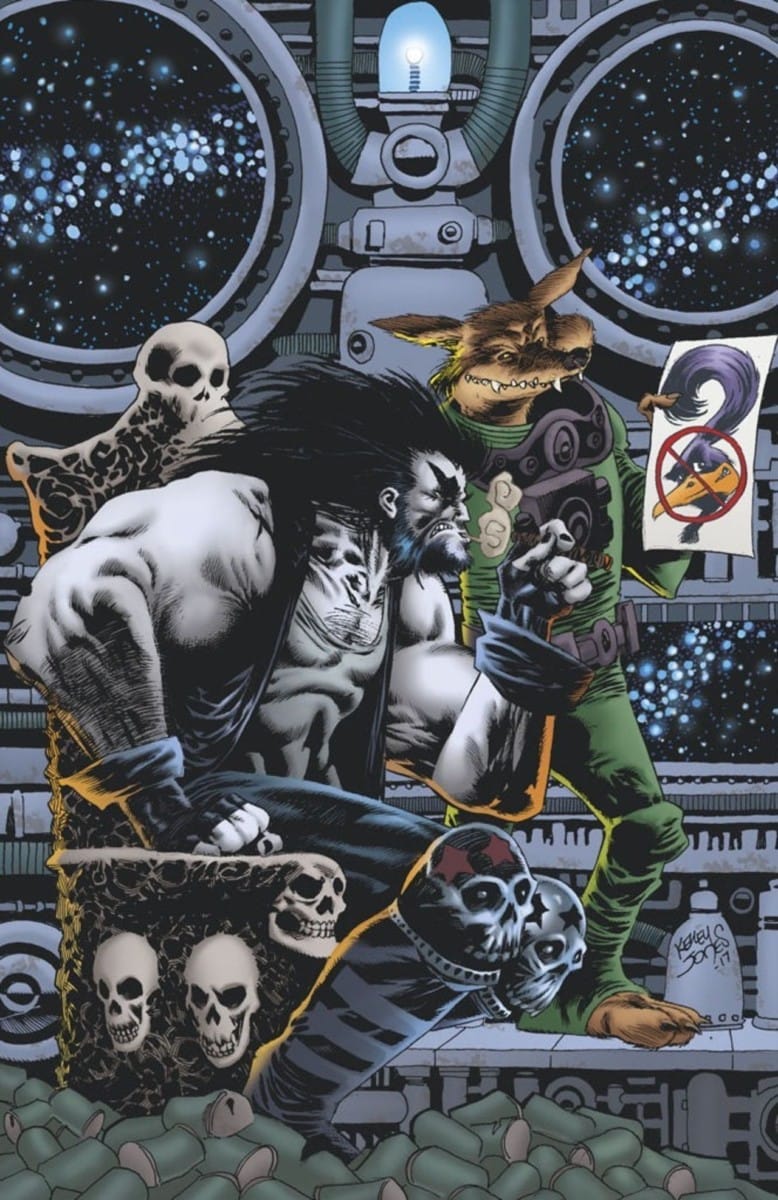 The problem here is that Wile E. Coyote and Road Runner have been reshaped to fit DC’s world. If the reader were unaware that this was a crossover they would just be seen as jokey aliens that happen to look like the LOONEY TUNES characters. While the story isn’t out yet, such radical reshaping could disappoint fans. Then again, these comics also have Elmer Fudd hunting Batman so that insanity may make up for it. Still, it’s questionable how this crossover will be received.

Regardless, it’s unlikely crossovers will stop anytime soon. There’s simply too much childlike glee for fans, and even failures can be fun for the sheer madness of it all. That’s why we always love crossovers, no matter who or what are involved. It’s simply too much fun to envision them coexisting.

Speaking of which, I’m gonna go play with my LEGO Delorean and ECTO-1 and see if I get any ideas…