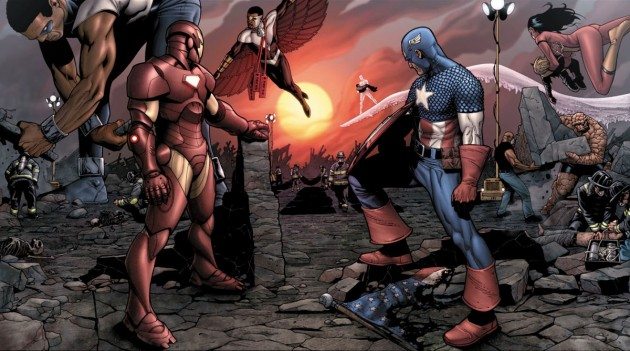 Comic books are stories about heroes and villains, pitting the “Truth and Justice” good guys against antagonistic foes striving to harm the innocent and take over the world. However, at the same time, the genre has proved itself to be a very progressive medium capable of addressing social and political issues that the country found itself too scared to discuss. Maybe it was because 40-50 years ago comic books were seen as merely something for kids, but this sense of obscurity allowed the genre to discuss topics like sexism, racism, xenophobia, and other forms of prejudice under the noses of the public. Eventually, as comic books became more respected by critics and audiences, the themes became bolder and more vocal, critiquing the real-world conflicts and their consequences by forcing their heroes to deal with similarly themed problems of their own. Arguably one of the most notable examples was the 2006-07 miniseries CIVIL WAR, which took the themes of a post-9/11 environment and turned them into a story about personal freedom versus national security. While the story ended up being a mixed bag in execution, it’s without a doubt one of the most important comic books of the 21st century. 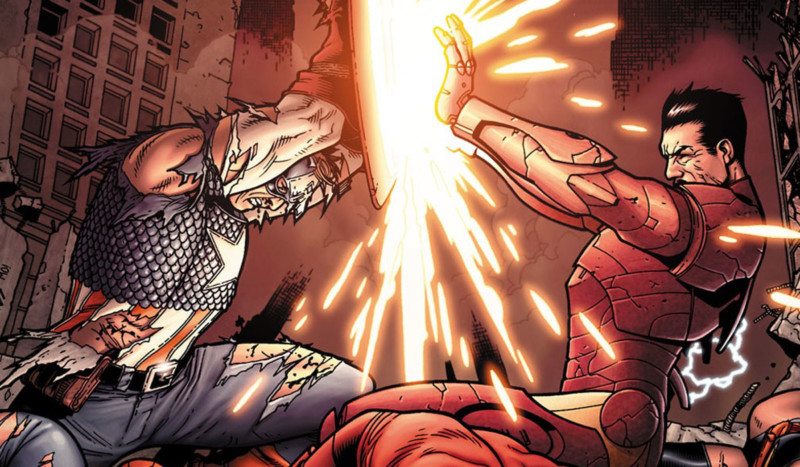 When Mark Millar and Steve McNiven released their story, it was a bold and risky deal. Not only was this a superhero crossover on a massive scale, but it also was doing something rather unique with the story: holding the heroes accountable for their actions. Granted, THE INCREDIBLES kind of did this a year earlier, but the world that these heroes inhabited was no longer the same one that it had been a few years ago. To say the events of 9/11 changed everything in America would be a gross understatement: it was the first time in possibly decades that the United States felt vulnerable. More specially, it was the first time the people felt vulnerable, with the loss of nearly 3000 lives forcing us to realize that we too could be victims of foreign attackers. But instead of the Red Dawn/Nuclear Armageddon-like scenarios of the Cold War, this fear was more subtle, driven by the psychological worry that any second of the day a terrorist attack could occur. It was a sense of apprehension that no one knew how to deal with back then and the choices the government made to deal with the problem were…. controversial upon their enactment.

Marvel Comics had dealt somewhat with the events of 9/11, with THE AMAZING SPIDERMAN #36 telling a story of both heroes and villains dealing with the aftermath of an event that even they were powerless to stop. CIVIL WAR’s story, on the other hand, drew parallels to the decisions made because of 9/11 and the consequences they had on our country as a whole. America had gone into Iraq under misleading information regarding the possibility of nuclear weapons and our actions there only served to destabilize the Middle East even further. And at home the Bush Administration’s passing of the Patriot Act, a means of increasing domestic surveillance to determine possible terrorist activity, ended up taking more of our individual freedoms in the name of protecting those very rights. From these questionable decisions, an age-old question was raised again: is security more important than personal liberties? These were extremely polarizing questions at the time and to see a comic book series take an ambitious attempt at answering them, albeit not that well, was rather shocking for the pre-MCU comic book world.

READ: How does CAPTAIN AMERICA: CIVIL WAR compare to its comic counterpart? Find out here!

CIVIL WAR follows the aftermath of a battle involving a group of D-List reality star superheroes known as the New Warriors, which results in six hundred people being killed. Following this event, the public’s faith in superheroes and other super-powered beings begins to waver, causing them to demand some means of holding the heroes accountable. As a result, the government passes the Superhuman Registration Act (SRA), a legislative bill that requires mandatory registration of any and all U.S. citizens who possess superpowers. This bill serves as the catalyst for the philosophical questions CIVIL WAR tries to cover, a means of regulating power within certain individuals in the name of the common man’s protection. It acknowledges that while superheroes use their powers in the name of good, they can still be viewed by others as dangerous and should be held to the same amount of scrutiny as law enforcement and the federal government. This is represented by the two men who serve as the poster boys for those supporting and opposing the Registration Act: Tony Stark and Steve Rogers. 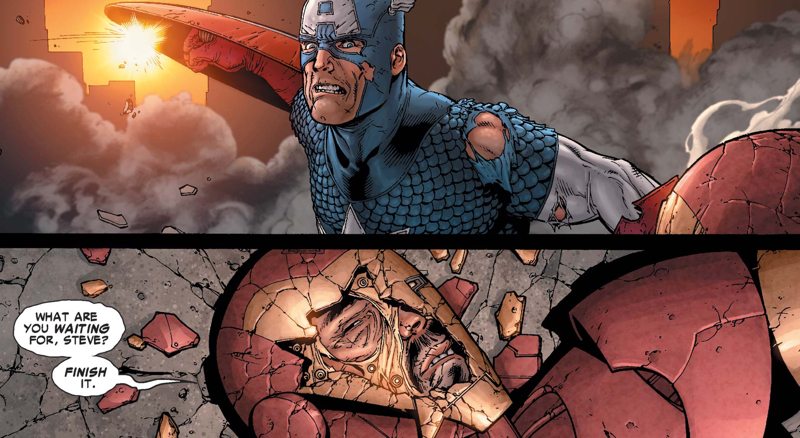 In the case of Steve Rogers, it’s not hard to see why he would be the character most vocally opposed to the Registration Act. After all, Captain America (excluding his current Hydra self) has always been depicted as a champion of American values and the rights of its citizens. Like Superman, Rogers is a man willing to put his life on the line to help anyone in need simply because it’s the right thing to do in his conscience. And a law that, in his mind, punishes certain individuals for who they are (i.e. having powers) goes against the values that he has been taught to fight for as a soldier. Not only that, but the SRA’s passing would force ANY person with powers to reveal their identity to the government, regardless of whether or not they wanted to use their powers in public. To Rogers, this likens the SRA to little more than slavery, depriving an individual of his or her personal liberties simply because their powers may have the potential to harm others. It’s a kind of injustice that our country should fight against and not encourage, as it undermines the very constitutional rights that the government claims it is trying to protect. In his mind, we as a people cannot give up our natural-born freedoms simply for the sake of national security, as to do so opens the door for others to take advantage of the common people for their own benefit.

With Tony Stark, on the other hand, things are a lot more complicated. While feelings of patriotism and protecting the innocent have always been a part of Steve Roger’s character, Stark is a character driven as much by his ego as a need to repent for his sins. His powers aren’t caused by cosmic waves or serums or radioactive bites, but a series of armors that he can rebuild and dismantle whenever he choose. This has led to numerous stories in which his own technology has been used against him and the world for harmful purposes, so it’s understandable that he would understand more than anyone that there are consequences for one’s actions. Not only that, but he’s also a futurist who constantly plans ahead in order to prepare for future conflicts, so the idea of the Registration Act makes some sense in preventing disasters like what happened with the New Warriors from ever happening again. He doesn’t like the idea of registration, but rationalizes that getting behind it at this point will allow him to make sure it’s done correctly without causing further discrimination. And most importantly, agreeing to the SRA would allow them to regain the public’s trust, listening to their demands that superheroes be held accountable for their actions. This way, at least future heroes could be trained to use their powers and abilities responsibly.

LISTEN: Here are our thoughts on CIVIL WAR and its impact on the Marvel 616 Universe

Now was CIVIL WAR’s storyline perfect? No. In fact, I’d argue that this series got insanely messy as the story went on, devolving from philosophical insight on real-world events to a full on smack down between two sides that didn’t want to hear that they were wrong. By the final issue, the plot had gone from depicting this conflict as one with no easy answers to “both sides are acting like jerks and should just stop fighting each other.” In fact, CAPTAIN AMERICA: CIVIL WAR did a much better job analyzing these topics because the stakes between heroes were slightly less low-key. Yes, the relationship between film Steve and Tony wasn’t as meaningful compared to the comic but it at least made both sides feel justified in their positions and maintained them without diminishing either stance for the sake of melodrama. So why then do I think that, despite its numerous problems in the writing, CIVIL WAR is the definitive Post-9/11 comic book? Because it chose to deal with a topic that was newly-relevant in the public back, yet has now come to define the relationship between the American government and its people. 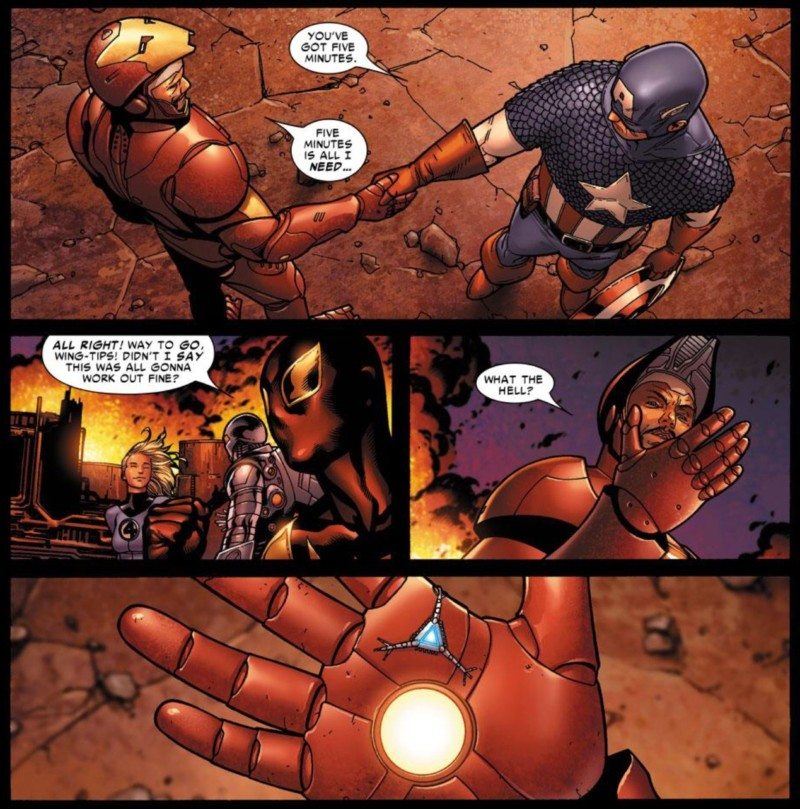 In many respects, our country’s reaction to the events of 9/11 has come to define what we see as morally acceptable within this world. Our fear of groups like Al-Qaeda pushed the United States to pursue military involvement in the Middle East, something that we still continue to this day. Furthermore, the rise of groups like Al-Qaeda, ISIS, and the Taliban have resulted in a discriminatory backlash against the Muslim community; at the same time, that very fear has increased vocal support for anti-terrorist legislation by the government. The result has been an increase in large-scale surveillance across our phones and internet access, all done in the name of national security. All this ties back into that ongoing debate of freedom versus security and whether or not it’s worth giving up our rights, as well as denying others theirs, so long as we remain protected in the end. Like the stances of Iron Man and Captain America, some people think these sacrifices are necessary in order to protect ourselves against future threats, while others believe such sacrifices overstep their boundaries and hold the many accountable for the actions of a few.

The biggest flaw of CIVIL WAR — the insane levels of hostility between Rogers and Stark throughout the entire miniseries — hit way too close to home in how both sides of this argument view one another. It never made sense for two characters typically depicted as close friends to suddenly act as if they had been enemies all their lives. You expected them to put aside the fighting at some point and just talk things out, yet the writers kept on finding absurd and controversial ways to make both sides want to fight, among them making characters act very out of character. The same feelings could be said for America, with those on both the left and right viewing each other as if they are an unforgivable threat to their own political beliefs. There’s few center positions to voice a case because both sides want to be right, to the point that some parties are unwilling to even trust the facts anymore. If the 2016 election proved anything, it’s that our country remains so disillusioned with the government, media, and itself that it has given the phrase “literally anything else would be better” new meaning. In many ways, the problems with CIVIL WAR make it rather prophetic, its divide amongst the superhero community mirroring that of the common people over 10 years later.

CIVIL WAR is definitely polarizing in execution, but an extremely important story within the Marvel 616 universe as well as modern comics in general, capturing the feeling of a post-9/11 world rather well. It addressed the political and social commentary of the times and tried to explore a question that didn’t really have an easy answer. But it’s a question that we are still exploring today even as the country itself splits itself further and further apart. Like the Captain America and Iron Man of this story, our country seems to be willing to engage in even more pointless fighting and name-calling rather than explore a solution that both sides can agree on in order to make positive progress. And unless our country moves away from those narrative flaws, like Marvel Comics, our future will be equally as polarizing.