I know I’m not alone in saying that I do not look back at my time in middle school fondly. I never fit in, and not in a cool “edgy” kind of way either. I was a weird kid, and the weirder my peers insisted I was, the weirder I became out of spite. Growing up weird has its perks, like a crash course in how to deal with ridicule. As I grew (and am still growing) into my weirdness as an adult, the traits that were once perceived as cringeworthy have become endearing quirks to the people around me. Although my hair has finally returned to a natural color, and I no longer wear clothes from Hot Topic, I will always proudly see myself as a weird kid. That being said, if you identify with the freaks, the rebels, and the weirdos, like I do, I have mandatory reading for you.

JONESY, created by Sam Humphries and Caitlin Rose Boyle, follows a misfit teenager who discovers she has the power to make anyone fall in love with just about anything except herself. Like any teenager would, she uses this newfound shipping power to cause all kinds of mischief, both intentional and unintentional. At its core, JONESY is a coming of age story revealing that love (along with just about every other aspect of life) is not as simple as one might think. Despite its spectacular premise, it has more in common with  the “slice of life” genre than fantasy or sci-fi. The plot revolves around Jonesy, the titular character, using her powers to solve typical teenage problems: dealing with her rocky relationship with her mother, thwarting bullies at school, and getting the attention of her super-secret crush. 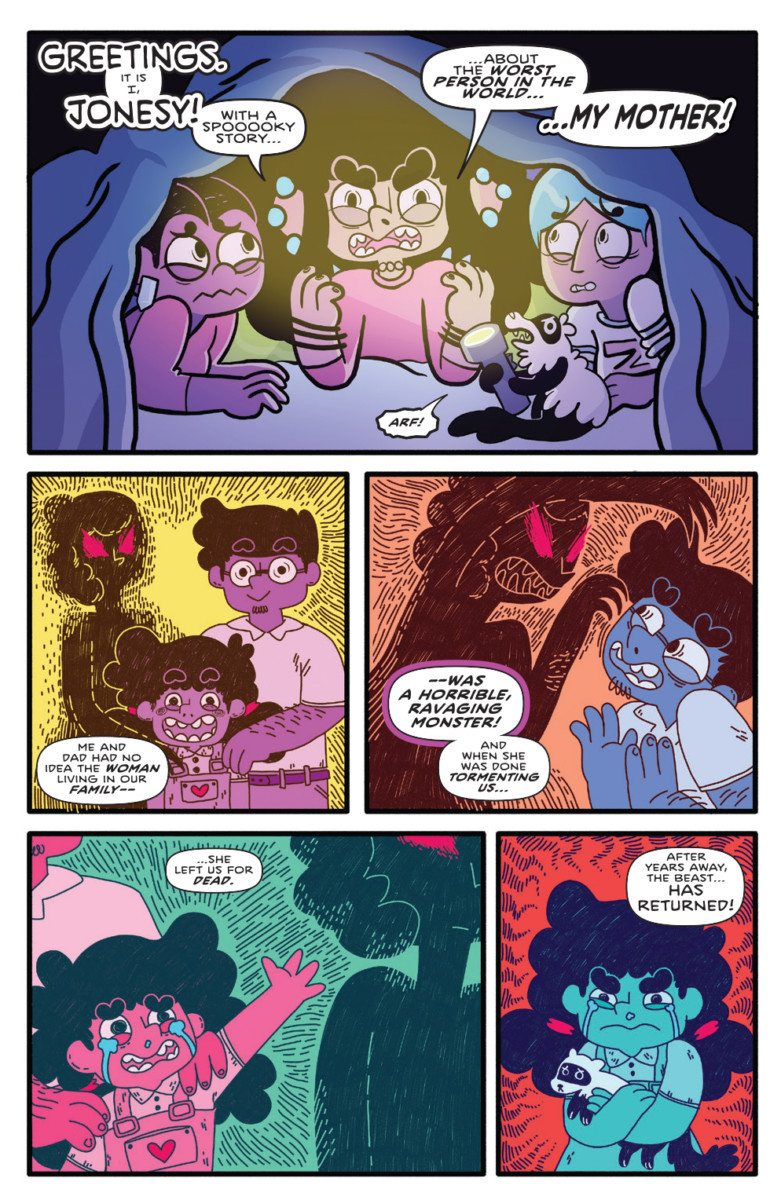 The first thing that makes JONESY absolutely brilliant is the titular character herself. Because Jonesy is not tasked with vanquishing evil, she is allowed to be a deeply flawed character. After all, she is just a teenager. She’s over-dramatic, self-absorbed, and rebellious, all of which is emphasized by her fourth wall breaking monologues. Above all else, Jonesy is afraid of her own vulnerabilities, resulting in her tough girl persona. However, as flawed as Jonesy might be, she is constantly growing. She is figuring out that the world does not revolve around her, that everyone is not out to get her, and that her actions do in fact affect other people. Humphries’ characterizes Jonesy in a way that makes her still absolutely lovable despite possessing the same character flaws as other teenagers. Humphries does not write his titular character as a parody or a joke, but as a colorful representation of what it’s like to find yourself slowly becoming an adult.

Susan, another main character, is not your clichéd endlessly loyal best friend figure either. In fact, she seems poised to become the antagonist in JONESY #1. After teasing Jonesy, Susan becomes the first person that Jonesy uses her powers to embarrass. However, after seeing Susan upset, Jonesy realizes that, despite her popularity, Susan is also dealing with her own insecurities. The two form a friendship, shattering the misfit versus popular girl trope. Like Jonesy, Humphries created Susan with quirks and interests that make her a round character.

READ: We picked JONESY as one of the best new BOOM! comics of 2016! Find out what else made the list!

Caitlin Rose Boyle’s art perfectly reflects the quirkiness of JONESY’s cast of characters. Like Jonesy herself, the comic’s art style is distinct and equal parts edgy and adorable. Boyle pays a great deal of attention to the characters’ outfits, which helps emphasize that fashion plays a large part in how Jonesy expresses herself. Even the background characters have their own visual flair, from hijabs to neon hair. Boyle’s art creates a colorful, bubbly, idealized version of our own world in which people of diverse backgrounds happily coexist.

Notably, both Jonesy and Susan are queer women of color. They never have a big coming out moment or even explicitly state their sexualities. The naturalness with which Humphries writes these queer characters is a hit against heteronormativity, since it discourages the reader from assuming that any given character is straight. Although Humphries does not explicitly politicized the queer identities of his characters, this subtleness makes its own point. JONESY exists in an idealized, but still imperfect world, where all identities are valid and welcome. The creators of JONESY do not include minority groups as a narrative device, but because they genuinely believe these groups are worthy of representation simply for existing. Given the problems with representation that so often plague mainstream comics, it’s refreshing to see minorities depicted as people just like their straight, white, cis-gender counterparts.

Although not as important as their commitment to diversity, the creators of JONESY are also able to include modern technology in a way that does not feel contrived. Boyle and Humphries clearly have their fingers on the pulse of teen culture, and not in a way that feels patronizing. The characters use a social media platform called “Pix Snap,” which has a similar interface to Instagram. The characters also video chat with one another on a platform similar to Facetime, and send each other short videos like one would on Snapchat. Like its inclusion of minority groups, JONESY’s inclusion of these apps is not a plot device. Humphries and Boyle are not trying to make a statement about teen culture in the 21st century. They are not making a value judgement about social media. They included this technology because that’s genuinely how Millennials communicate with one another.

From the art to the writing, there is a genuineness to JONESY that cannot be faked. This series exemplifies what’s so great about smaller comics: the creators have the freedom to make what they envision. They don’t need to cater to an existing fan base since they are building their own. This allows JONESY to be unapologetically weird and progressive. Whether you’re a former misfit or a current one, JONESY is guaranteed to strike a chord with you.

Why Aren’t You Reading is a weekly column dedicated to recommending excellent series that didn’t break the top 100 in sales last month.