Having taken its rightful place as one of the top story lines in the history of the comic at the time, the hugely successful “Days of Future Past” had created more than its share of popular mutants which its creator, Chris Claremont, could choose from to round out his team of X-Men. The year was 1984. Kitty Pryde has taken a leave of absence. Cyclops retired and the void created by Jean Grey’s death is an elephant in the danger room.

Rachel Summers, an alternate future daughter of Cyclops and Jean Grey possessed by the Dark Phoenix, proved the right choice to Claremont as she joined the X-Men through a convoluted series of events. Unfortunately, X-Men fans disagreed with Claremont’s choice. How could the daughter of two of the most popular X-Men be so unpopular? The answer boils down to five simple reasons.* Constant whining over dead mother and cheating father. 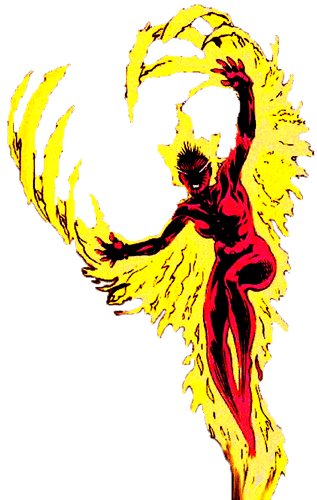 After the creation of “X-Factor” both Cyclops and Jean Grey were back on an X-Team causing Rachel to suffer some setbacks. Kicked off the X-men, she was demoted to the less popular spin-off series “Excalibur.” To make matters worse, her mini-series was cancelled. Later in the 90’s, to try to increase sales of Excalibur she was sucked into the time stream and lost in comic limbo (probably because she wasn’t enough of a 90’s“ bad girl” like Psylocke). Later appearing as an old lady in the critically-panned Cyclops and Phoenix (Jean, not Rachel) mini-series, it was revealed that she was put into Cable’s Akansi timeline. Bear with me, this is where things get even stranger, as Mother Akansi in that timeline, Rachel was the one that cloned Cable (that clone becoming X-Force baddie “Stryfe”) and retroactively became responsible for killing characters more popular than she was at the time. After the X-Cutioner’s Song, Stryfe (created by Rachel) unleashed the Legacy Virus into the present, which took the lives of Illyana Rasputin, Pyro, Revanche, Moira MacTaggert (well, she was infected), and temporarily killed Colossus and Madrox, the Multiple Man. This, of course, would be just the beginning of Rachel’s reign of terror.

Colossus came back to life and the X-Men are forced to fight the Breakworld in a story line where Rachel’s best friend Kitty Pryde sacrificed her life. Yes, that’s right, Rachel retroactively killed her best friend. *Sigh,* Kitty was so young.

Banshee started the X-Corps after Moira died while working on the Legacy Virus that Rachel was responsible for bringing into the present. He recruited mutant villains to work for him that eventually turned on Banshee. Finally, Mystique cut his throat. The injury would eventually lead to Banshee’s death in the “Deadly Genesis” story line. Rachel had, again indirectly, helped Vulcan and Mystique kill Banshee. In addition to her convoluted history and large hit list she is also extremely unpopular among fans.

Last year, “Comic Book Resources” fans voted for the 100 Favorite Marvel Characters, Rachel tied with Doop and the Sentry for #93. Now you may be saying to yourself “that’s not so bad” or “Hey, Doop is cool” but here are some comments people said at the bottom of the page. 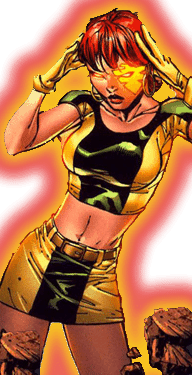 Now flashback to 2004, I was reading the X-men for three years and sort of enjoying Uncanny X-men since the Chris Claremont relaunch (it wasn’t as annoying as X-treme X-men), however, there was one member of the team I wasn’t familiar with or liked all that much; it was my first exposure to Rachel Grey, a whiny little girl doing a bad Jean Grey impersonation in a stupid mini-skirt put on the team only to serve the purpose of stimulating teenager’s (and Chris Claremont’s) hormones. Then I read Uncanny X-men #452, and saw her in an astral fight with Emma Frost. One scene was all it took. She proved to me that she wasn’t just a whiny little girl and that when written correctly she could actually be an interesting and compelling character. She then reverted back to that dumb Jean Grey wannabe, and now she is stuck in space after the events of Emperor Vulcan.

When and if Rachel comes back from space limbo she deserves to get a total character revamp from the current X-Men writers. How can they improve upon Rachel’s character without upsetting her two fans? First, she should probably not reference that she’s from an alternate future every other line (then maybe we could forget sometimes). Second, she should get a new costume that doesn’t have fans saying that she looks like a slut. And finally, third, she should be herself and less like the daughter of Scott and Jean. We aren’t always necessarily defined by who are parent’s are. So please X-Writers Rachel should come back soon. She has potential and, lord knows, you need more X-Women in your roster.