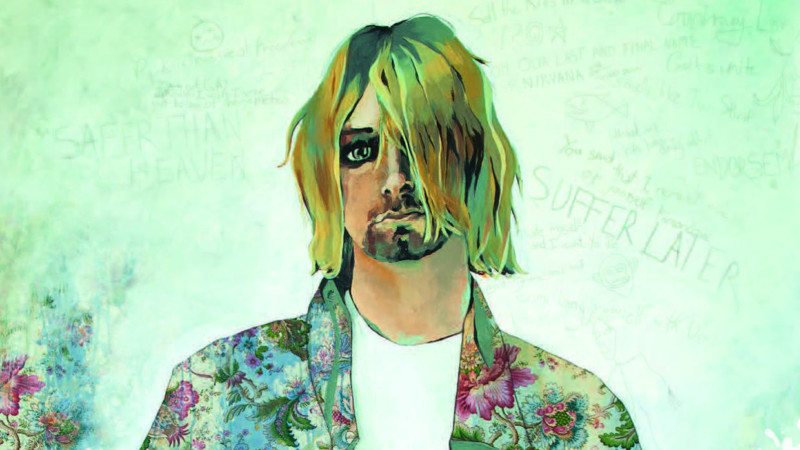 “I don’t have the passion anymore, and so remember, it’s better to burn out than to fade away.”-Kurt Cobain

The death of Kurt Cobain was a case study meant for graphic narratives. In these beautifully macabre pages, WHO KILLED KURT COBAIN grants us an all access pass into the darkness and light of the Nirvana front man. Writer and artist Nicolas Otero takes the basis of this adaptation from the French novel Le Roman de Boddah by Heloise Guay de Bellissen. In this french novel, Guay de Bellissen discusses Kurt Cobain’s career in music, his love life, and his addictions. Otero’s fictionalized retelling of the life and death of Cobain works as a similar examination of the grunge legend’s mind through the graphic novel medium.

READ: Depression has always been a heavy theme in music. Here’s an analysis on how that is spread across genres!

Otero’s work as both writer and artist brings the narrative to life as we are introduced to the mysterious, imaginary figure Boddah (the real life imaginary friend of Kurt Cobain). Boddah’s role in the narrative is fundamental. This is due to the fact that he is the name Kurt Cobain’s suicide note was addressed to. Rather than having Cobain walk us through these dark moments of his life, Otero uses the imaginary Boddah as our narrator and guide. 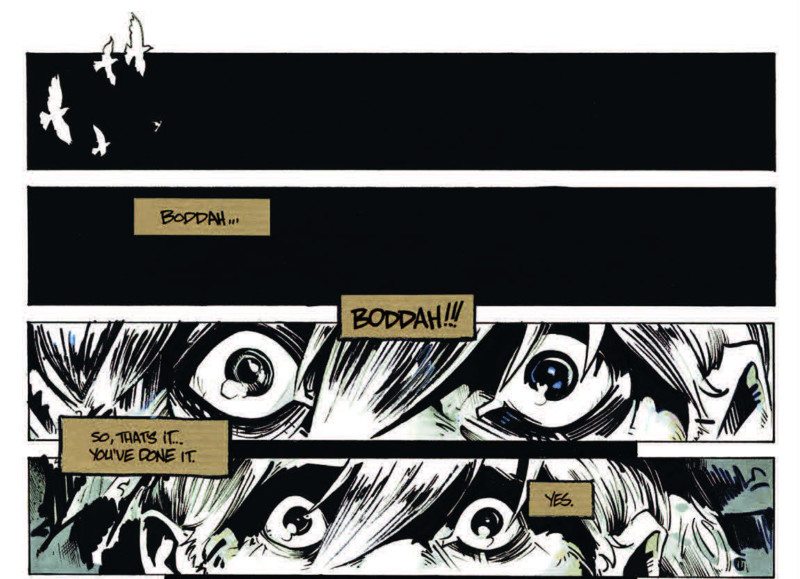 It was interesting to follow the fall of Kurt Cobain through the eye’s of a fictional character. It’s almost like getting a backstage pass to his life, a life that not many people got access to. Through him we experience the more intimate moments of Kurt’s life such as times where he would wear women’s clothing, which in Courtney’s eyes made him more gentle. Thanks to Boddah we get a very naked Kurt Cobain. Not just physically, but emotionally. All of the pain and struggle is put out in the open for us to analyze.

What grabbed my attention the most in this novel is Otero’s lack of color. A majority of the pages are black and white. Only occasionally does color make an appearance (such as red lipstick or Boddah’s shirt). He’s able to add a sense of beauty to a topic that would make many people weep merely by manipulating the colors we focus on. The red pops over the black, not to show us it’s someone’s blood, but rather because it embodies pain. 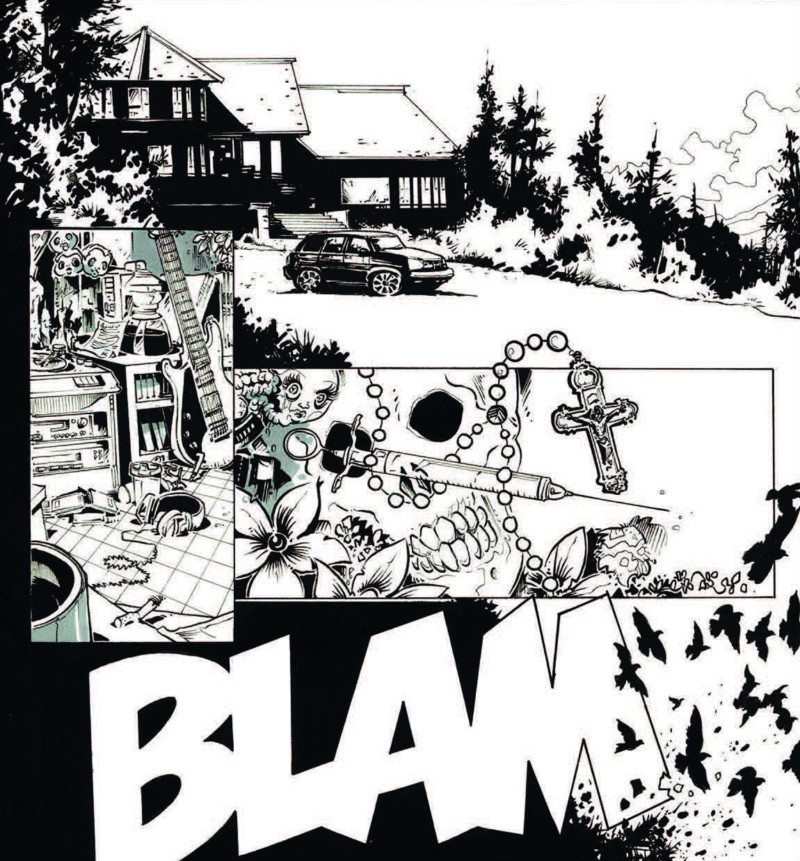 WHO KILLED KURT COBAIN explores the marriage of Cobain and Courtney Love in a way that doesn’t bash their intense relationship — instead it humanizes it. We do get a glimpse into the physical abuse and drug addiction that fueled their relationship, but mainly as a deep inspection of Cobain’s lifelong struggle with drug abuse. Otero does a great job of visualizing the highs and lows of drug use with his somewhat nightmarish illustrations. Seeing images of Kurt being pulled out of his high by a giant squid is both symbolic and stunning.

The twisted artistry that Otero created for this story isn’t the only highlight. His ability to create a gritty dialogue fitting of Kurt Cobain is seemingly flawless. He gives us both verbal and visual uses of the word “fuck” that one would expect from a person like Kurt. Through his writing we see that Cobain is alone, even when he is with Courtney. We see that he is hiding his pain at all times. He’s a misplaced person in a world built against him. His only voice of reason is Boddah, a voice who sometimes agrees that he should find a more permanent solution to his problems. 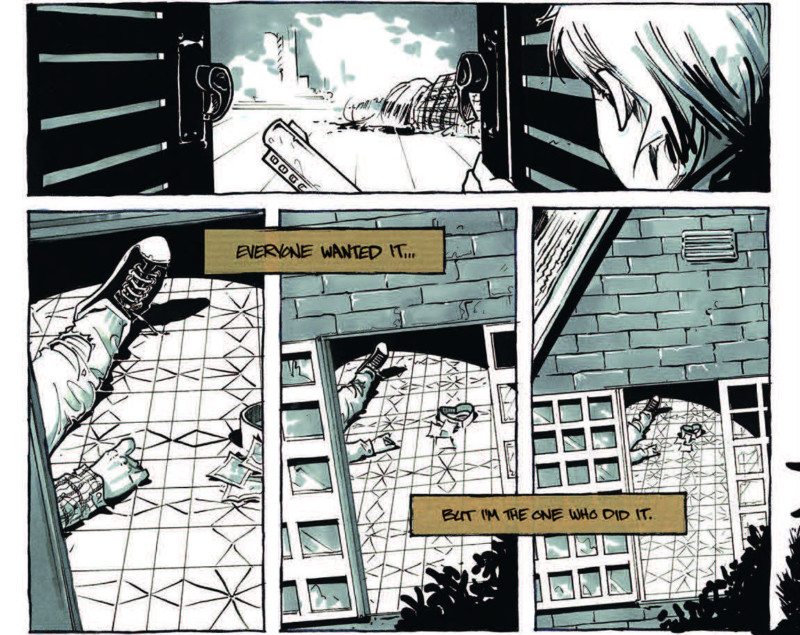 For any groupies of Nirvana still out there like me, Otero also amazingly portrays the musician side of Cobain. We get a look into  great moments like topping Michael Jackson on the charts. We even see how he got the title of his album “In Utero.” All of these moments build towards the wonderful characterization of Cobain’s passion for music — his one true love. The panels come off as genuine moments of his past, even though they’re fictionalized retellings.

This graphic novel was dark, disgusting, and terrifying to read. It left me wanting to throw on some Abbey Road to clear my head and think of better days. Honestly though, it was also real. It offered a level of realness that teaches you about the depressions and scary addictions of our world. A realness that shows our world for what it really is — a complex, misunderstood reality (much like that of Kurt Cobain). 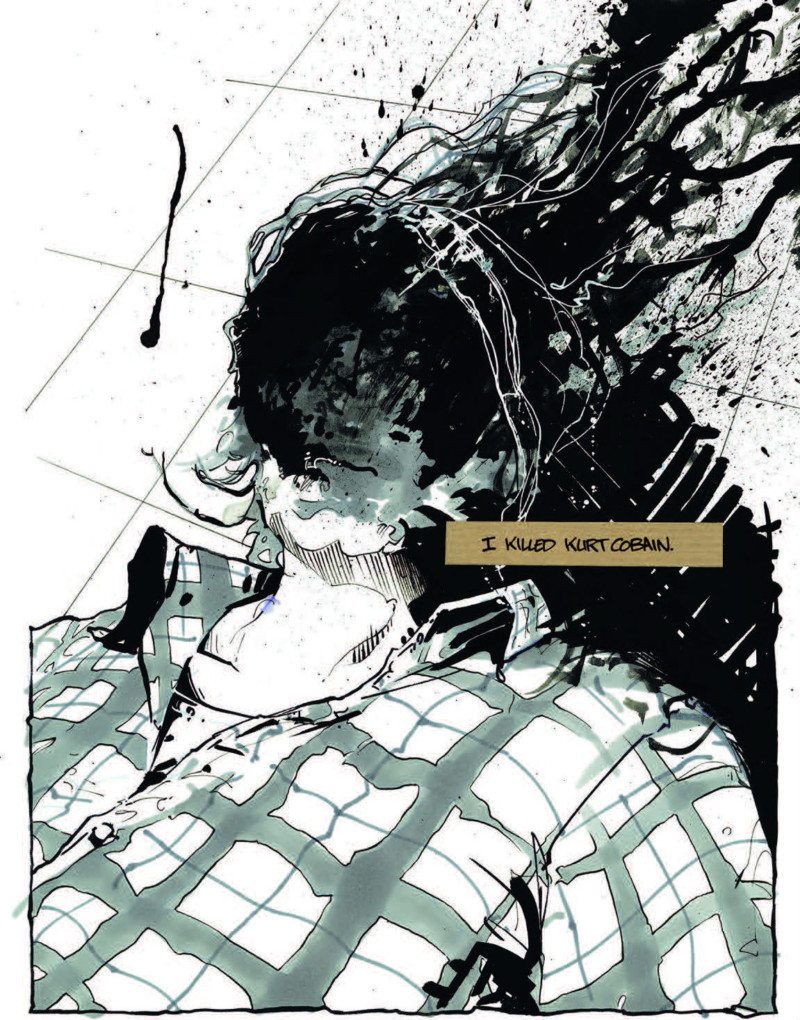 READ: Interested in learning more about the correlation of music and depression? Check out this analysis of the National’s music!

Not only do I recommend that all fans of Nirvana check out this graphic novel, but I believe they should do so while listening to the entire Nirvana discography. It will take you on a journey through the distressed mind of one of music’s most troubled artists.