In 2016, BOOM! Studios published many new series under their core brand as well as their imprints BOOM! Box, KaBOOM!, and Archaia. After much deliberating, we narrowed this list down to our six favorite in no particular order. We believe that these six comics reflect not only BOOM! Studios’ renewed dedication to diversity but also the very best of the unique and groundbreaking work that BOOM! continues to publish.

Jonesy is a quirky Latina misfit trying to navigate through her teenage years. Her life takes a turn towards the unusual when she gains the power to make people fall in love with anything with the exception of herself. Will she use her shipping powers for good or for evil? Probably a little bit of both. JONESY is a comic about love, friendship, and vulnerability. Suited for readers of all ages, it’s a hilarious reminder that sometimes your OTP isn’t as perfect as you might think. 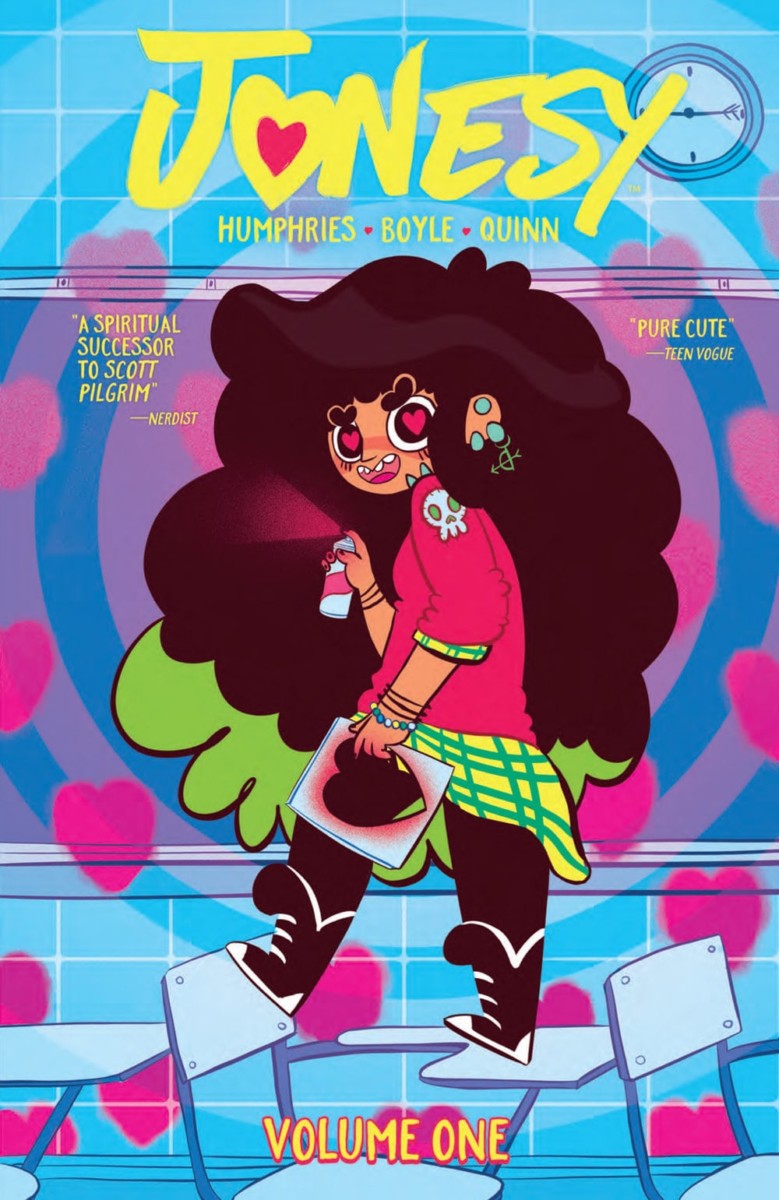 Published by BOOM! Box, JONESY originated as a four-issue limited run but became a monthly comic thanks to its great reception. Sam Humphries writes from a genuine understanding of what it’s like to be a teen, specifically in the 2010’s. JONESY’s cast of characters is diverse in terms of race, sexuality, and body type. Additionally, Humphries manages to incorporate social media and technology, a critical piece of modern teen-hood, in a way that doesn’t feel contrived. Caitlin Rose Boyle’s art is just as spectacular as Humphries’ writing. JONESY features visuals as unique, cute, and colorful as the titular character herself, making issue after issue an absolute joy to read.

READ: Already a fan of JONESY? Then our analysis of JONESY as a feminist take on romance is for you!

After both experiencing identity crises, twenty-somethings Jennifer Chu and Maise Huff find themselves drawn to the world of roller derby. During “Fresh Meat” orientation, they discover not only a new zeal for life but also develop a meaningful bond with one another. Can this new friendship survive the competitive world of roller derby or will being drafted to two different teams tear this duo apart? Packed with puns, girl power, and body positivity, SLAM! explores the roller derby subculture and the lessons learned both on and off the track. 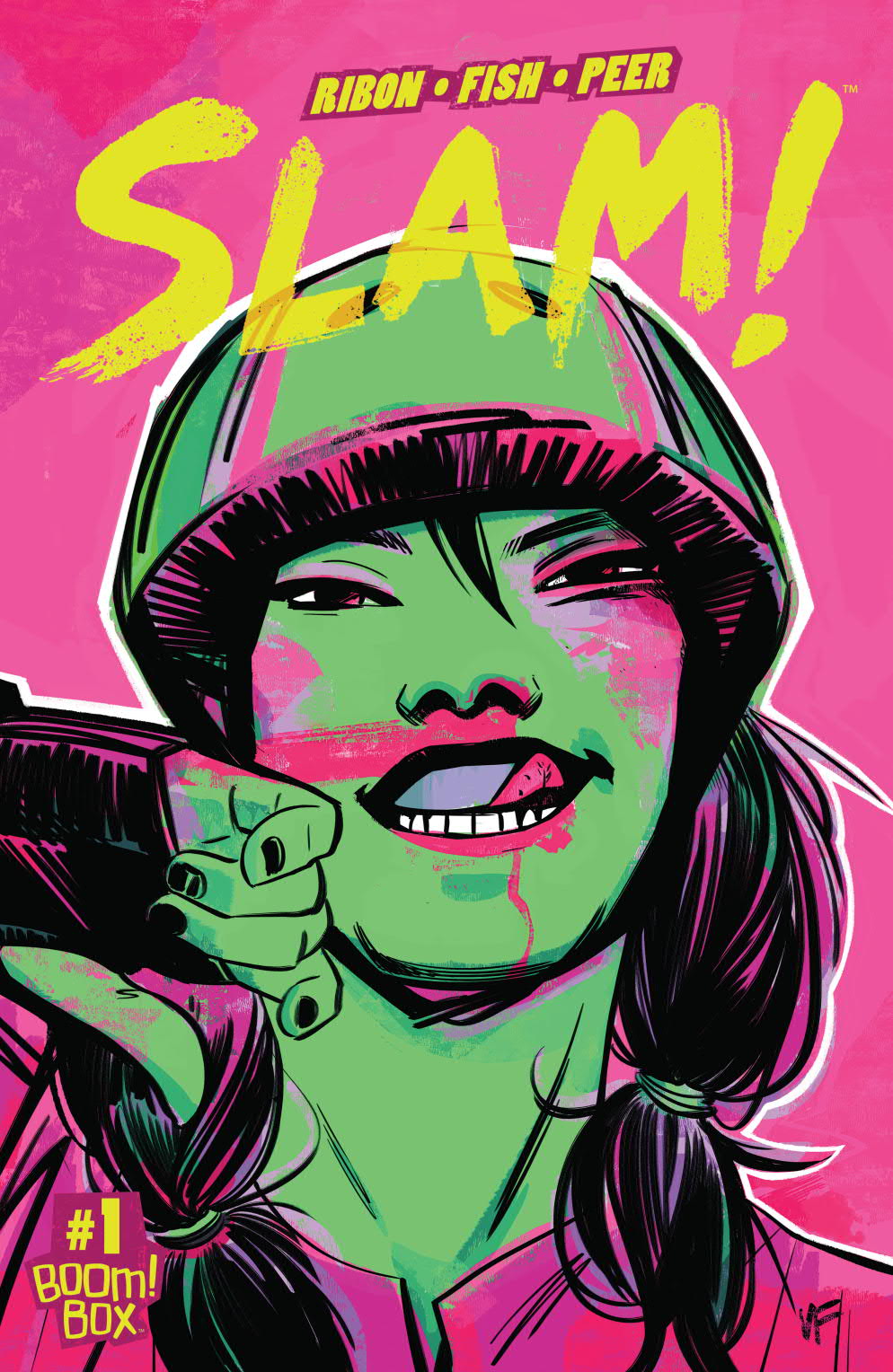 Although only a couple issues have been released, SLAM! has shown so much potential that the series undoubtedly deserves a place on this list. Through her writing, Pamela Ribon portrays the strength and complexity found in female friendships. The art of Veronica Fish drives home the duality of modern female identity as the characters both visually conform to and subvert traditional gender roles. SLAM! proves that you don’t need to be a superhero to be a kick-ass female. All you need is a pair of skates.

Through a magic spell gone wrong, Jack Burton of BIG TROUBLE IN LITTLE CHINA is teleported into the dystopian future of ESCAPE FROM NEW YORK where he runs into Snake Plissken. Despite their differences, these heroes must team up to take the road trip of two lifetimes! In case you missed it, the joke here is that both characters are played by Kurt Russell in the original John Carpenter films. Meta, right?

Even if you didn’t get the joke and you’re unfamiliar with the source material, I promise that BIG TROUBLE IN LITTLE CHINA/ESCAPE FROM NEW YORK is still worth your time. Admittedly, the hype around this series was due to the cult status of both films and the comic’s ridiculous premise. However, now that the hype surrounding its initial release has died down, I can say with objective confidence that this series is actually amazing. BIG TROUBLE IN LITTLE CHINA/ESCAPE FROM NEW YORK features action-packed writing with spot-on humor and dynamic art that is colored beautifully. The quality of this crossover series makes it a delight to read, even if you haven’t watched a single movie directed by John Carpenter.

READ: Are crossovers your thing? Read our review of the crossover between BOOM! Box’s LUMBERJANES and DC’s GOTHAM ACADEMY!

Moving is always hard, but Tommy Oliver is having an exceptionally difficult go of it after being transformed into the pawn of an intergalactic super-villain. However, things finally start to look up when he manages to break free of Rita Repulsa’s control with the help of the Power Rangers. As he trains with the Ranger’s sage mentor Zordon to become the sixth Ranger, Tommy discovers that Rita’s hold on him was stronger than anyone ever anticipated. 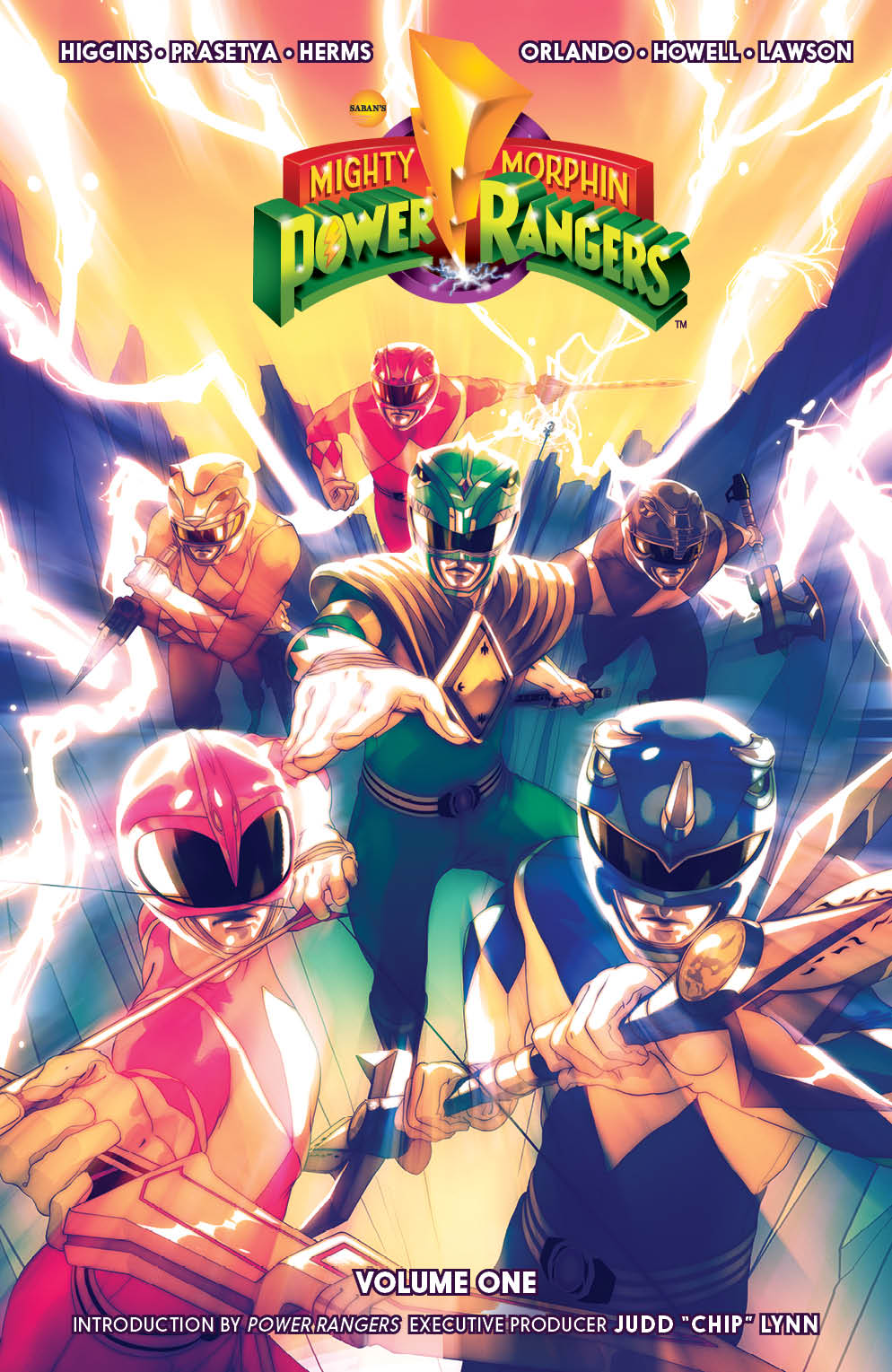 One of BOOM! Studios many licensing deals, MIGHTY MORPHIN POWER RANGERS is adapted directly from the original 90’s television series. The comic manages to stay true to its source material while modernizing the Rangers for a new generation. Kyle Higgins’ experience as a writer shines through with a perfect balance of dialogue and action sequences. Created in anticipation for the 2017 POWER RANGERS film, this series is a perfect primer for fans new to the Power Rangers franchise or those that need a refresher.

Once every seven years, portals between Earth and Ektae open for seven days. As this dimensional alignment approaches, earthling Jordan Molossus receives a mysterious package containing two circular iron urns and a note explaining that they contain the ashes of both his fathers. Jordan Molossus ventures into the magical dimension of Ektae to spread their ashes where his parents first met. Unfortunately, Jordan has made quite a few powerful enemies in Ektae and honoring this dying wish won’t be simple or without bloodshed. 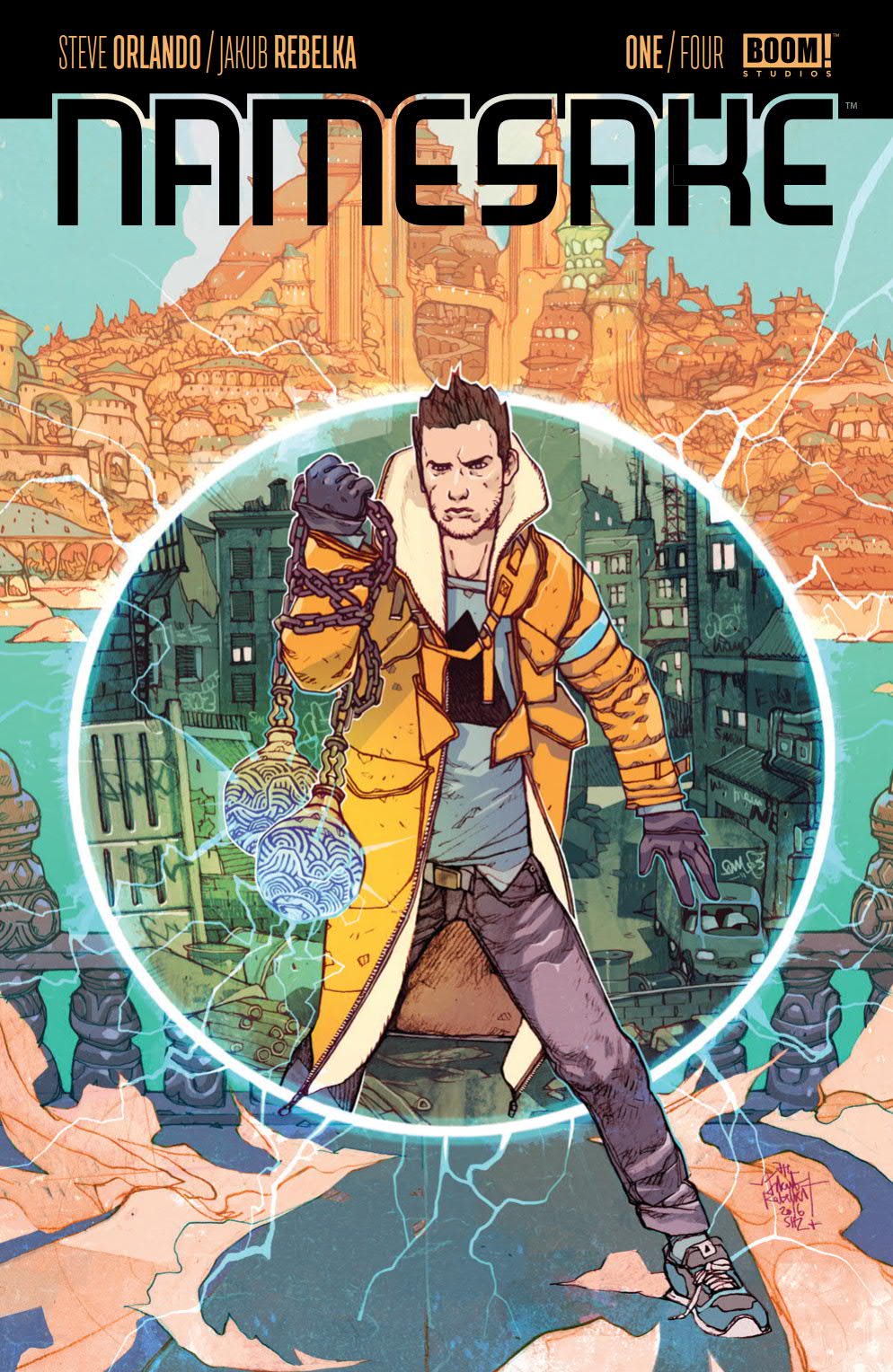 NAMESAKE is a four-part limited series written by Steve Orlando. Best known for his work in MIDNIGHTER, Orlando’s work is notable for its dedication to LGBTQ representation, and NAMESAKE is no exception. Jordan Molossus is a well-rounded character that proves there is nothing emasculating about being a queer man. Furthermore, Jakub Rebelka’s use of strong outlines and flat colors creates an intentional and unique cel-shaded quality to NAMESAKE’s visuals. With only two issues remaining, I cannot wait to see where Orlando and Rebelka take us next in NAMESAKE.

READ: Want to know more about NAMESAKE? Read our review of NAMESAKE #1!

THE SPIRE by Simon Spurrier, Jeff Stokely, and André May

THE SPIRE takes place in a tiered city occupied by both humans and mutated humans known as “the sculpted.” Shå is not only one of the sculpted but also the Commander of the Watch. When the Spire-Baron passes away, leaving command of the city to his less tolerant, more authoritarian daughter, Shå’s authority is threatened. As allies gather from across the land for the Baroness’s coronation, Shå finds herself with a brutal murder mystery on her hands. Determined to prove herself as an asset to her new haughty ruler, she sets out to solve the case and save the Spire from the violence that threatens to consume it. 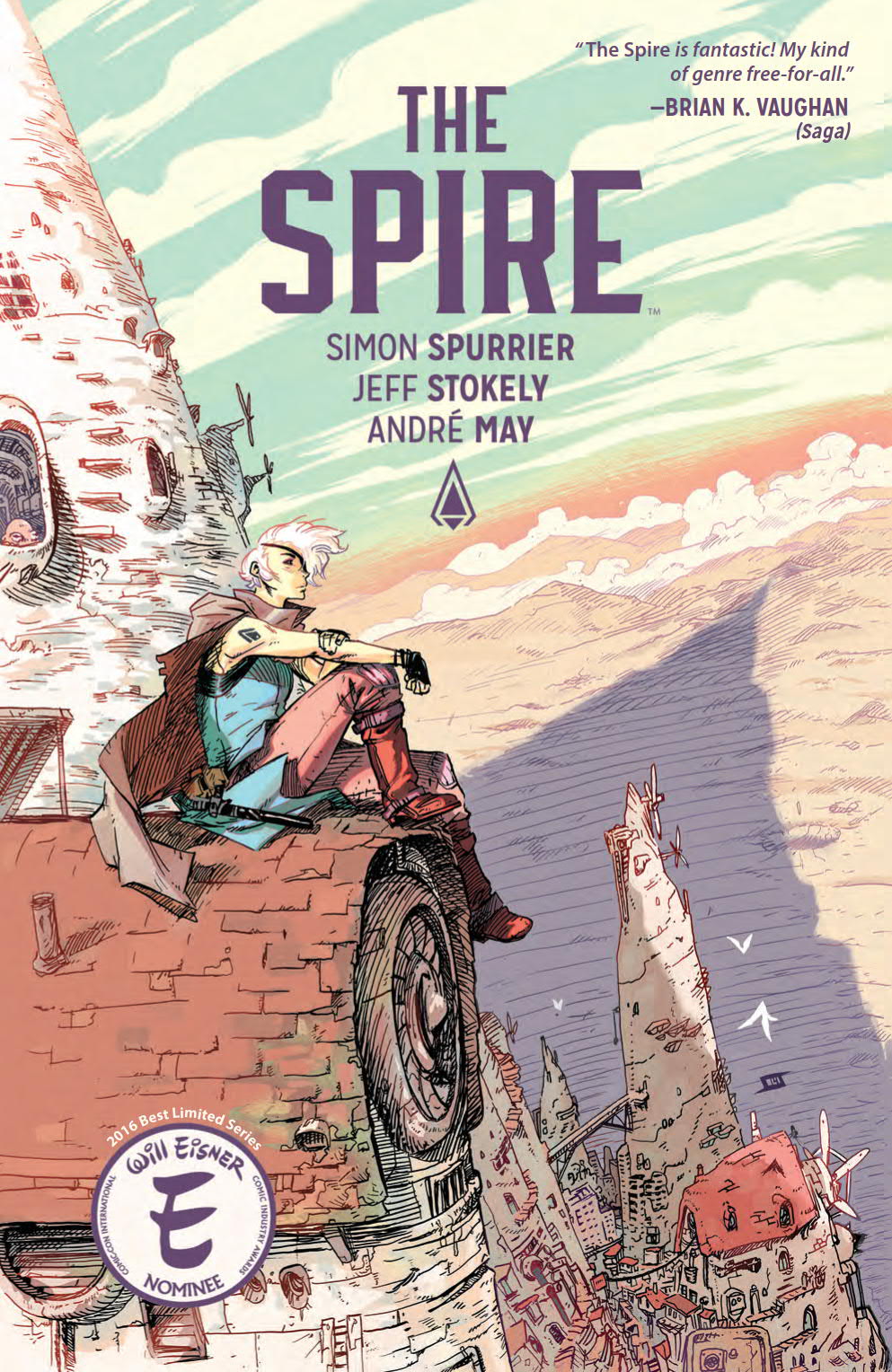 In all fairness, THE SPIRE is a limited series that began in late 2015, not 2016. Still, it deserves a place on our list of the best comics from BOOM! Studios in 2016, given the quality of its writing, art, and world building. Taking all of this into account, it’s not surprising that THE SPIRE has been nominated for the Eisner Award for Best Limited Series in 2016. Known for their fusion of western and science fiction tropes in SIX-GUN GORILLA, Simon Spurrier and Jeff Stokely once again pull off an unexpected yet effective merging of genres in this series. THE SPIRE offers a noir-inspired narrative set in a fully fleshed-out fantasy world with steampunk flourishes. In fact, it accomplishes all of this while thematically addressing how race and class shape concepts of power and privilege in society.

Did we get it right? Let us know in the comments what your favorite BOOM! Studios comic of 2016 was, and what new series you’re looking forward to in 2017!