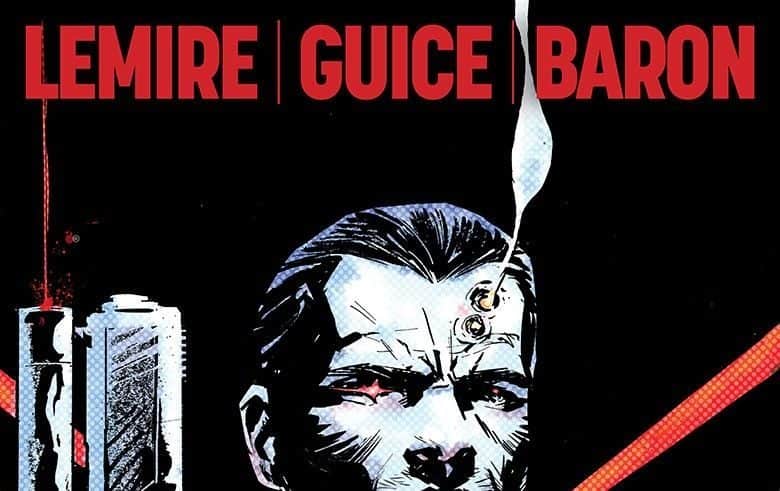 The best part of Valiant is their consistent effort to make their comics approachable while connecting them through a bevy of characters, plots, and settings. When they say that a comic is a new arc/jumping-on point, they mean it! I recall some of Marvel’s recent Point One comics trying the same thing while managing only to be part of the ongoing story. This isn’t a bad thing, but it isn’t exactly enticing to new readers. Two of this week’s comics begin new arcs, and I feel confident in recommending them to folks who haven’t read anything prior to these issues–or even any Valiant Comics at all! 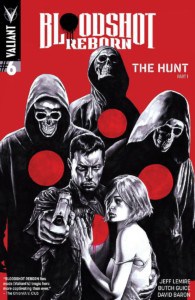 I’ve always found that Jeff Lemire’s best work occurs in stories focusing on single characters. I liked JUSTICE LEAGUE DARK/UNITED and THE VALIANT, but I loved ANIMAL MAN, SWEET TOOTH, and TRILLIUM (though, PLUTONA is excellent so far for a team-type book, and I’ve not read ESSEX COUNTY). Moving into his second arc, Lemire has really gotten inside Bloodshot’s character (this literally happened in the last issue) and developed him through THE VALIANT and this series’ first arc.

Bloodshot, now going by Ray, was once a nanomachine-powered assassin in the employ of Project Rising Spirit, a black ops contractor. Bloodshot was extremely dangerous; super strong, fast, with a healing factor and many other capabilities. That is, until his abilities were stripped from him during THE VALIANT. He has since attempted to find his identity while coping with his loss of powers, only to find that his lost nanomachines had been infecting people, causing them to become murderous and unstable. Bloodshot felt it his duty to hunt down these infected and reclaim his lost nanomachines, terrified of becoming the ruthless killer he once was. 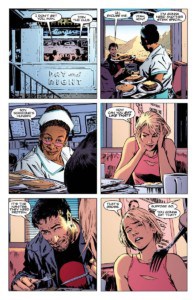 This arc begins as Bloodshot starts his search for the remaining infected. He has regained a number of his abilities, though he’s still running low on power. Having seen the violence that the infected are capable of, he wants to get them as soon as possible. This issue is clearing the table from the last arc. Gone are Ray’s mental companions Kay (the Geomancer who stripped Bloodshot of his powers) and Bloodsquirt, thus allowing the story to have a tighter focus on its characters. To stop these people, Bloodshot must take absorb their nanomachines (and likely kill them), perhaps losing his regained humanity in the process. There’s a lot going on inside Bloodshot’s head, even without Kay and Bloodsquirt, and that’s one of Lemire’s strongest attributes as a writer. This is all well-conveyed by Butch Guice, using a murkier style than in his Ninjak backups. Guice has always been a solid artist, especially on his CAPTAIN AMERICA work, and it’s good to see him on this title. He uses more photo reference than I’d like, but the paneling works and he has strong facial expressions.

BLOODSHOT REBORN returns from a journey deep into its main character’s psyche to examine how his changes have affected him, and it couldn’t be better for it. This comic uses Bloodshot’s background along with Lemire’s new additions to greatly enhance the character, and focus on telling a strong story around these elements. New readers should pick up this comic, though reading THE VALIANT and the first arc of BLOODSHOT REBORN would enhance the experience! 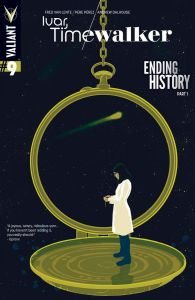 Speaking of continuity, IVAR, TIMEWALKER’s new arc ties in with a number of comics, namely ETERNAL WARRIOR and ARCHER & ARMSTRONG. This makes sense of course, as Ivar is Gilad (Eternal Warrior) and Armstrong’s brother. At the end of the last arc, Ivar died. As we should all know by now, however, that doesn’t mean too much in time travel narratives. IVAR #9 begins with a much younger version of the enigmatic time traveller arguing with his brother Aram (Armstrong) about whether to use the device that eventually gives the brothers immortality on their dead brother Gilad (The Eternal Warrior). Their argument is halted by the arrival of Neela Sethi, Ivar’s companion (in his future), as she takes Ivar through time and alternate universes in order to again stop the Null from destroying all of time.

This is all confusing, I know, but I promise it makes more sense in the comic! Ivar’s future self died at the end of the last arc, and his companion Neela has gone back in time in order for younger Ivar to help her save all of time and space. 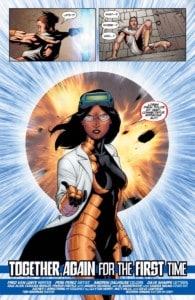 The addition of these alternate universes is great, and the clown Vikings had me laughing particularly hard. Van Lente has always done a great job of including humor in his comics, and this seems like a return to the style of his previous ARCHER & ARMSTRONG. I liked the first arcs in IVAR, but I certainly prefer the humor of the former title, and I’m glad to see a return to that sensibility.

CHECK OUT our interview with UNIT 44 writer Wes Locher for more space action!

Perez and Dalhouse continue to impress with designs for the aforementioned Clown Vikings, dinosaurs, and a number of other great alternate universe ideas. This arc seems like it will continue with a journey through these universes as the Timewalkers Ivar and Neela attempt to stop the Null from eliminating all life (again), but the underlying sadness in Neela’s character colors much of her interactions with this Ivar, with whom she doesn’t share anything, really, other than their comparable intelligence levels. It’s great to see them interact in this different level of a relationship, and I am curious to see how this fits in with Ivar’s timeline in the future. 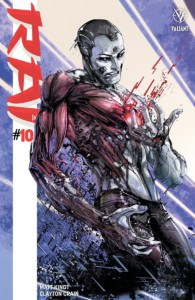 RAI continues to impress me as Rai’s journey on Earth continues. While the side plots on Neo Tokyo move the story forward a bit, Rai’s journey to regain his powers on Earth, having fallen there at the end of the last arc, is the largest part of the issue and by far the most engaging. It reminds me of a JRPG or an anime, especially during a lovely scene with an ancient tree and what appears to be Ninjak’s discarded sword. If you’re not familiar with Rai, know that he is a cyborg assassin (similar to Bloodshot). He rebelled against his boss Father, the tyrant of the Earth-orbiting megacity Neo Tokyo, with a group of friends, only to be cast down onto the dead Earth, where his powers were dulled significantly.

Rai’s journey follows many of the same beats as Bloodshot’s and seeing them mirror each other through time is very interesting. Both struggle without powers, though regaining their humanity through their journey. For Bloodshot, it’s to protect the world from himself, essentially, while Rai is more focused on figuring out what he can be without his powers. Rai also has the evil dictator of Neo Tokyo, Father, to worry about, should he ever return to the city in the sky. 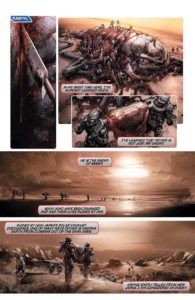 Clayton Crain is killing it on this comic. I’ve mentioned in the past that I think he’s well-suited to a cybernetic environment, as seen in Neo Tokyo, but he’s done a great job detailing the desolate landscape of Earth, ravaged by Neo Tokyo’s orbit and presumably other environmental factors. The tree I mentioned earlier is beautifully incorporated in a sequence with Rai, while the mutated inhabitants of the planet look appropriately dirty and futuristic. He gets to present some wonderful sequences on Neo Tokyo as well, as Rai’s associate Spylocke struggles against vicious robots in a reality show/arena/death race scenario.

If any of this sounds interesting, pick up the last issue of RAI and read along with me as the awesome (and beautiful) ride continues! 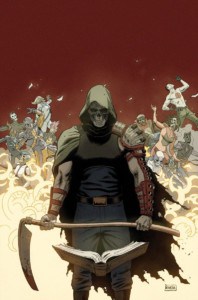 Just two comics next week: Robert Venditti’s BOOK OF DEATH continues with issue #3, and it’s joined by its tough-to-find companion series, Fred Van Lente’s BOOK OF DEATH: LEGENDS OF THE GEOMANCER #3. The last issues of both of these series were great, and last issue’s villainous reveal has me hotly anticipating next week. Shadowman’s Master Darque has been revealed as the mastermind behind the disasters; he should be a formidable opponent for Eternal Warrior, Unity, and anyone else who should stand between him and his goals. See you next week!