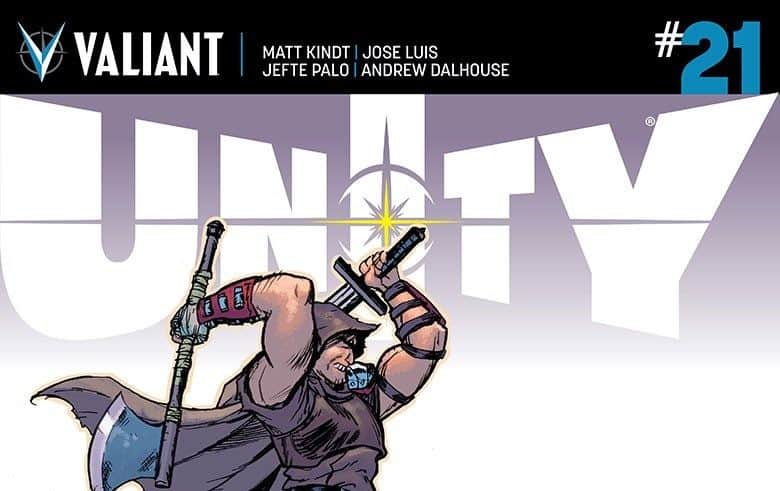 Welcome to another Week in Valiant! We’ve only got two titles this week, but they seem to follow similar thematic notes. That’s something I’ve noticed (and generally liked) in Valiant comics. They often share thematic tones, even outside of crossovers. Also, they are not afraid to change the status quo or setting of the universe. Perhaps the currently ongoing BOOK OF DEATH event will continue this trend – I hope it does! This is part of what makes Valiant Comics so exciting. They manage to craft all of these comics into a living, breathing universe that has enough oversight for continuity buffs to gush over, while maintaining singularity in its titles. So I could read BLOODSHOT REBORN without these other comics and have a great time, but having read THE VALIANT, the comic’s roots are clear. You can really see the connective tissue, and again that’s exciting for guys like me. Oh well, enough about Valiant’s strategy; here are this week’s reviews. First up is their flagship title, X-O MANOWAR!

READ: DID YOU MISS OUT ON LAST WEEK IN VALIANT? NO WORRIES, YOU CAN READ ABOUT LAST WEEK THIS WEEK! WE WON’T TELL! 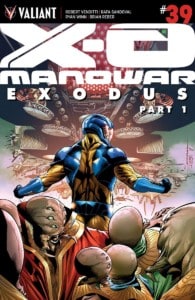 A new arc begins! Once again, Robert Venditti and company have made it exceptionally easy to jump in to this issue, though previous issues are absolutely worth catching up on for the full story experience.

Aric has just defeated the Dead Hand — aliens intent on destroying the Vine, Aric’s armor, and the relocated Visigoths — and taken a bit of time to relax. Last issue was Aric’s wedding, in fact, but his kingly duties again interrupt his happiness. The recently dispossessed Vine — Aric’s tenuous allies — have arrived seeking asylum. Of course, GATE (the Global Agency for Threat Excision) is (understandably) wary of invading aliens, due to the recent Battle of LA in the Armor Wars and the (entirety of the) Dead Hand storyline. GATE planes surround the Vine; a pilot (going against orders) fires on the ship. The pilot’s story begins the book and his terror of the alien invaders is, again, well-founded, though his behavior is well-against Colonel Capshaw’s orders. 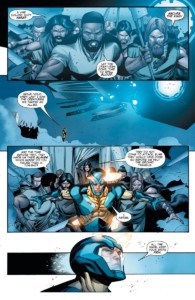 This sparks a major confrontation between the Vine, Aric’s Visigoths (who are also fairly upset with the Vine due to their years of slavery under old Vine leadership), and the US Military. It seems as though Aric’s life could come crashing down around him — it’s not easy being king.

This issue did everything a story arc’s first issue should — it recapped previous events, introduced the new status quo, and provoked something major for the characters. Aric’s new life on Earth has never been easy, and his relationship’s uneasiness has been the most exciting and interesting point for this comic. Robert Venditti’s consistent characterization of Aric and the rest of the Visigoths (and others) has been incredibly helpful to this title, and again I’m excited to see where this plot goes. Between GATE, the Visigoths — some of whom are still running counter to their king — and the Vine, the upcoming quagmire will be dire, with Aric caught between his alliances and loyalties.

Rafa Sandoval’s art is great and clean. His paneling is easy to follow — the most important part of sequential comic, and something that is often unobserved. He also keeps the look of the Vine consistent, which is something that has been difficult in Valiant books.

War seems to be a theme in this week’s books. War seems to start in X-O Manowar, and Unity continues the story of War-Monger, as she explains her rationale to yet another member of Unity.

LISTEN: A NEW COMICSVERSE PODCAST IS HERE WITH SPECIAL GUEST THE BATGIRL OF BURNSIDE! CHECK IT OUT! 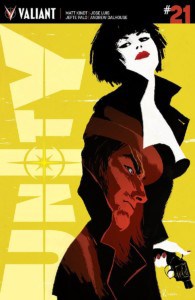 War-Monger’s history continues in this title, much similar to the two preceding issues. Issue #19 featured War-Monger reciting her origin and defeat at the hands of the first medieval Unity team to Ninjak, while issue #20 showed her tussles with Unity teams in the 1800s and 1900s as described to Livewire. Both issues ended with her brutal, quick incapacitation of the heroes. Naturally, she goes after Gilad (The Eternal Warrior) in issue #21. Likely, she will tell another story to Aric (X-O Manowar) in the next issue before taking him out as well, though this arc has to end some time. War-Monger’s stories are interesting — I like seeing the different incarnations of Unity, but the stories are all pretty much the same. After three issues, I’d like to see some movement in the story. There is a brief scene between Gilad and that suggests some more movement, but it appears as if we will have to wait until next issue for any sort of resolution. 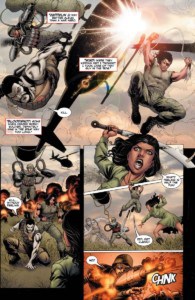 As a team-up book, Unity is certainly unique. It shows an interesting perspective on superhero teams, its very busy members shown as such, and I’m glad to read it. This arc has been getting a bit repetitive, as I mentioned earlier. I  like the concept of War-Monger but I’d rather see something other than bleeped out cursing and disgust towards Unity members, and maybe more background or forward movement. That being said, I think that Kindt is adding a lot of lore and potential for future stories. I’d love to see flashbacks or time travel or, simply, more of the other Unity teams. Maybe even some teams of the future, as BOOK OF DEATH is likely to show.

Despite my issues with this kind of story, I very much like the continued varying art. The segments in the past have art by Jose Luis and Alisson Rodrigues, while Jefte Palo handles War-Monger’s present-day confrontations with Unity. The contrast in art is striking, and helps delineate the time periods clearly, while evoking a specific mood for each. The end of this book suggests that Unity has some plan on facing Warmonger, though I assume the net issue will feature the villain speaking with Aric (X-O Manowar) and summarily defeating him, though as the arc closes the climax may change the comic’s contents accordingly.

READ: SECRET WARS IS STILL BREWING AND WITH IT COMES DEADPOOL! FIND OUT HOW THE MERC WITH A MOUTH IS DOING HERE! 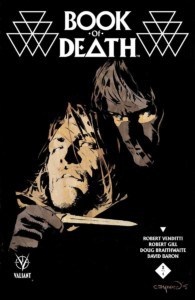 BOOK OF DEATH continues with issue #2! The Eternal Warrior goes toe-to-toe with Unity in order to protect the new Geomancer. Note: every one of BOOK OF DEATH’s covers this week is great – just a sidenote.

Additionally, we have issues of RAI and IVAR, TIMEWALKER out. RAI begins a new arc – perfect for new readers, as IVAR completes one. Ah, the circle of life (in comics). See you next week!