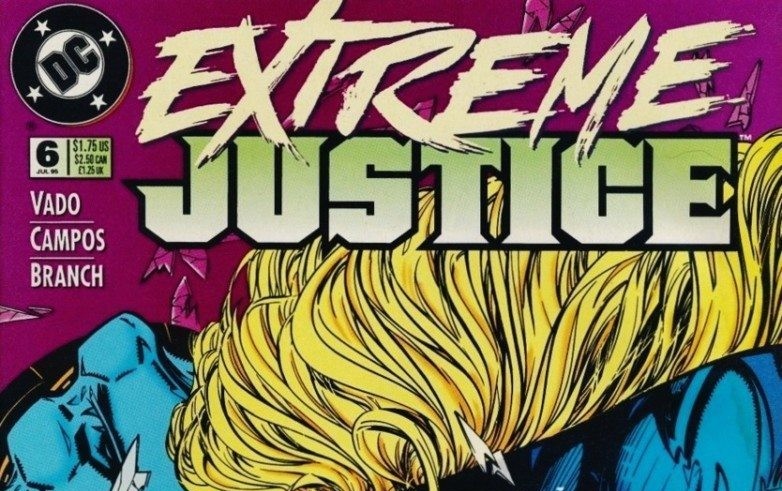 It’s time again for everyone’s favorite day of the week! The day of the week when everyone gets to hop into another bout of mayhem and insanity in This Week in Comic Book History! And boy do I have a special bit of mayhem and insanity for you today. Today, we are going to look at what happens when regular justice just isn’t enough in EXTREME JUSTICE #6, released in July of 1995. If you’ve never read this series, you are in for a treat because EXTREME JUSTICE is the holy grail of insane DC Comics.

In EXTREME JUSTICE’s defense, it was not an anomaly. The entire comic book industry had shifted into darker and more exaggerated storytelling by the mid-90s. Marvel had teams like X-Factor and X-Force, which were essentially more extreme versions of the X-Men. Image’s flagship titles when it first began, like SPAWN, BLOODSTRIKE, and YOUNGBLOODS, followed in this mold as many of their founders had recently worked at Marvel and adopted that style. At DC Comics, Batman had become darker, Superman had been murdered, and Robins were getting beaten and blown up by the Joker. It was a time of much more violent storytelling.

It took a series like EXTREME JUSTICE for the comic industry to realize the trend had gone much too far. These series had gone past mature stories and instead became laughable in their portrayal of beloved characters. Luckily, I can take joy in this kind of writing. Why? Probably because I’m sick. 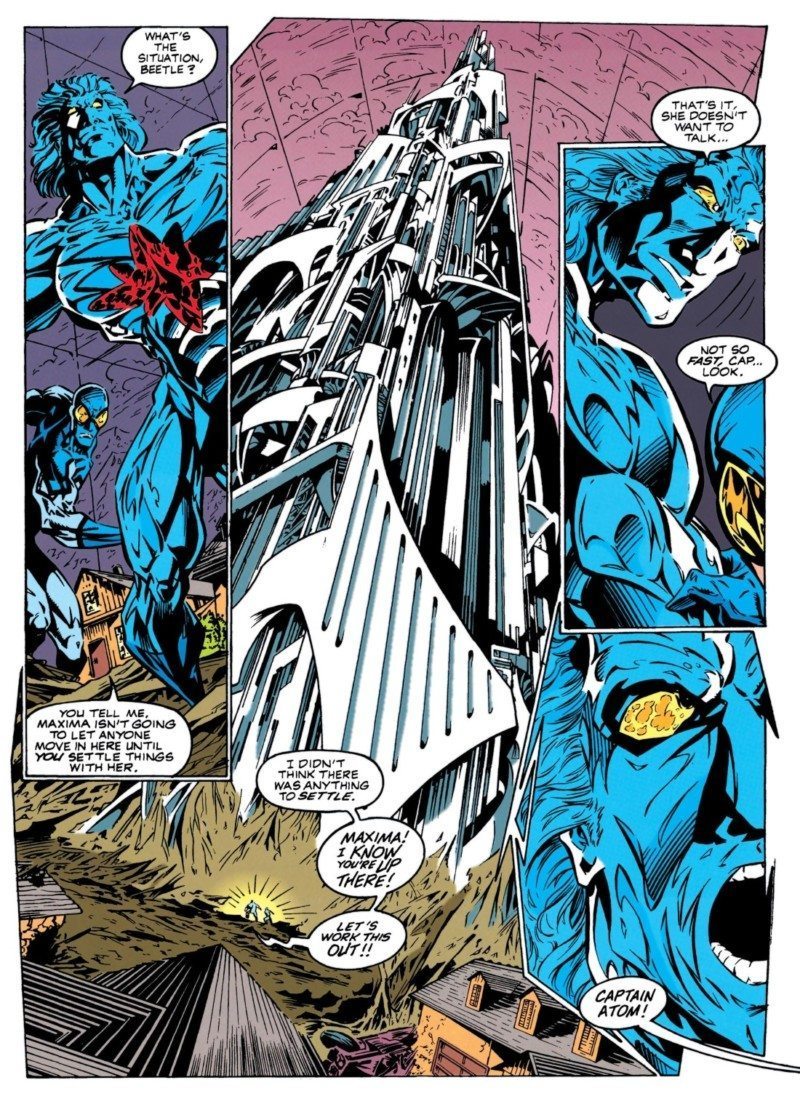 The first thing that needs to be addressed before we get into the story is the fact that everyone is screaming at each other all the time. Just look at the cover. That level of aggression and anger is the norm. No one in this story is calm. Don’t believe me? Let’s look at the opening scene where Captain Atom goes to confront his ex at her supervillain…fortress? Spaceship? I don’t know. It’s a giant silver thing with lots of pointy silver tentacles. Captain Atom asks to speak to his ex, named Maxima, who responds by wrapping him in metal tentacles, taunting him, and throwing him against the wall to scream in his face about how Captain Atom cost her a family.

READ: This Week in Comic Book History also looked at Blue Beetle and Booster Gold in JUSTICE LEAGUE INTERNATIONAL #25. Check it out!

I have no idea what Captain Atom did. From the context, it seems like he just didn’t want to be the father of her children and now she’s super upset about it? It’s weird and never really explained. There is also an outrageously uncomfortable amount of sexual tension when Maxima starts talking about wanting a kid again and Captain Atom decides he is totally down for that before she randomly changes her mind and tells him to go away. During the entire ordeal, I honestly felt like I should leave and come back later. No one likes to watch other couples fight, and no one likes watching those same couples have flirt through weird sexual tension afterward. Unless you do. In that case, that’s cool. We accept all kinds of folks at ComicsVerse. Just know we will not go people-watching together in the future. 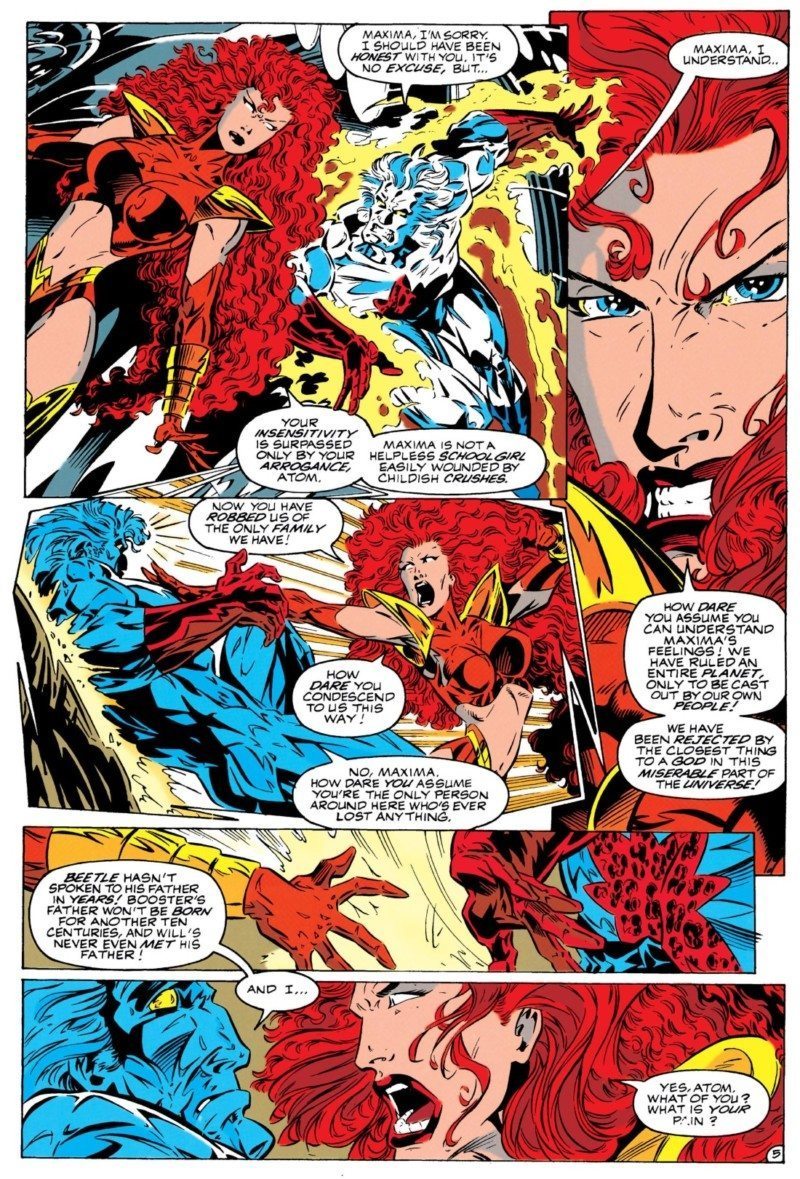 In a side plot, everyone is pissed at everything. Firestorm’s powers don’t work anymore, so he decides to stand around naked and yell at Blue Beetle. Somehow, his rage causes his powers to come back but transfers his nudity to Blue Beetle who somehow loses all of his clothes as Firestorm’s powers return. I sometimes wish I had gotten my undergraduate degree in Superhero Science so that I could understand this kind of stuff. We then move onto the star of the story who just wants his life back: Booster Gold.

Booster is mad because everyone in this story is mad. Unlike everyone else, though, he has a legitimate reason to be mad. A man named Dirk Davis has taken all of his money, and Booster has discovered he is hiding out in a giant office building in Las Vegas as the CEO of a company he owns. OK, it’s not exactly hiding, but for some reason, it’s implied Booster has been looking for this guy forever. Such was life before Google, I suppose.

Booster flies over to Dirk’s office in a suit that is barely keeping him alive. According to him, his lungs are like swiss cheese (I guess he became a super heavy smoker at some point?) and he also has a robotic arm. If something can be extreme, you’d better believe its ultra-mega-super-radical extreme in this story. Oh, and when he finds Dirk, he goes HAM on his desk. He rips the desk completely in two, holds on to it awhile, then body slams it into splinters for seemingly no reason. It’s actually my favorite scene in the comic. Enjoy it for yourself below. 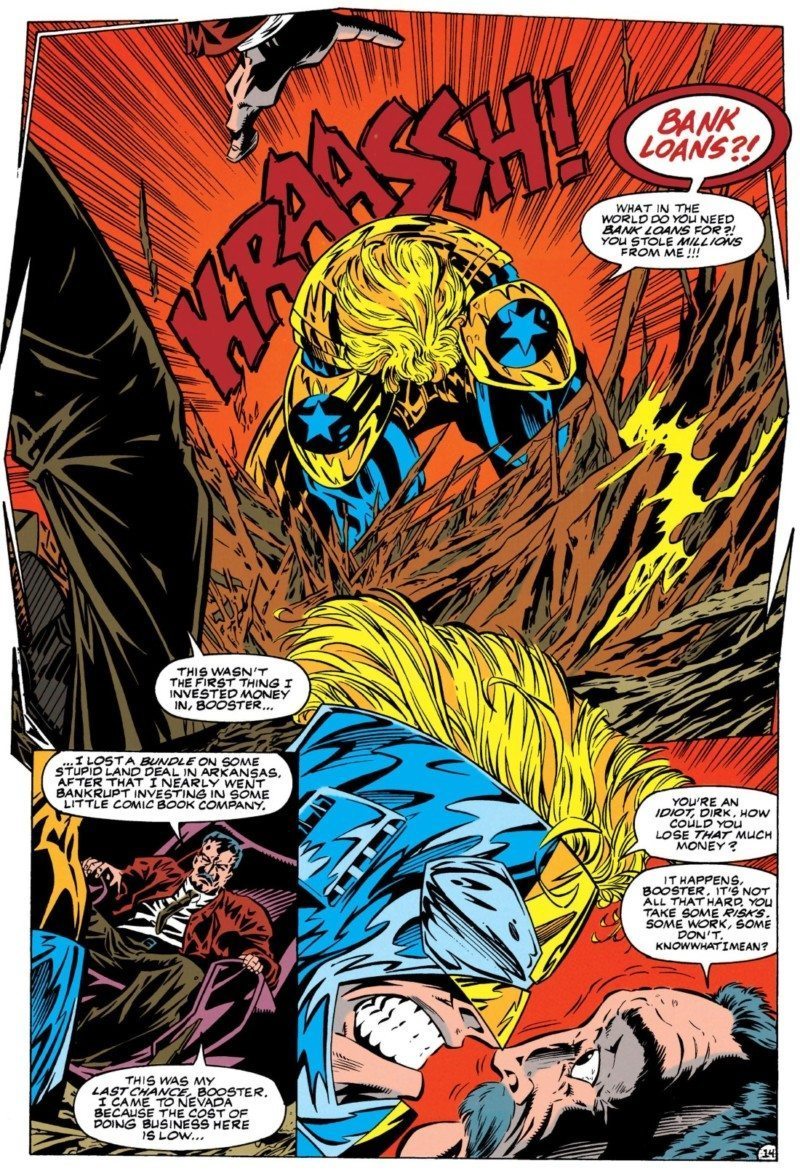 Bank Loans indeed. It turns out Dirk blew all of Booster’s money on a video game company that he refuses to call a video game company. Instead, he refers to it as “interactive multimedia entertainment.” As a man who plays many video games, I find this insulting. (Of course, this was the mid-90s when videos games were kind of a dirty word. Man, the 90s sucked.) Anyway, Booster decides this is his company now and has security remove Dirk from the building. I’m not a businessman, so I’m going to assume that’s how these things work. The guy who makes a weekly series full of juvenile jokes doesn’t get to question how CEOs get fired. Blue Beetle also shows up and becomes Booster’s partner. Now, the Blue and Gold own their own video game—sorry, interactive multimedia—company. Good for them.

To wrap things up we head back to Captain Atom who is on the phone with his other ex, Plastique, who just got out of the shower and apparently has no idea how to use a towel because she is soaking wet the entire time. Then, Maxima comes and interrupts his phone call to tell him how to fix things with Plastique. This doesn’t go anywhere, though, because CNN reports that mayor Rudy Giuliani has appointed an alien named Monarch to improve living conditions in New York City. It’s a really abrupt plot shift that comes out of absolutely nowhere. 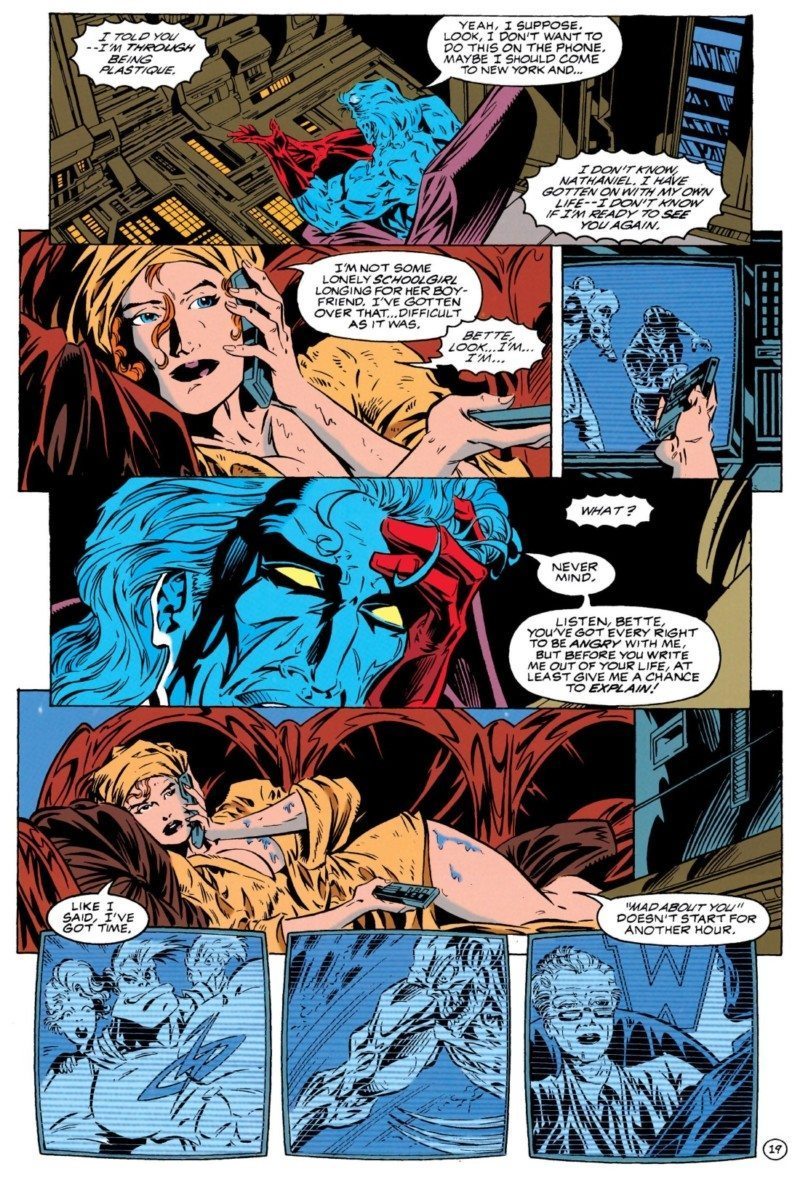 And we don’t get anymore information on who Monarch is because that’s all for EXTREME JUSTICE #6! Captain Atom has solved none of his lady problems, and Booster Gold and Blue Beetle now somehow own a video game company. I’m not going to lie to you guys: this was a really draining comic to read. It’s difficult to stay extreme for this long without having a heart attack. So I’m going to take a weeklong nap, and I’ll see you guys all back here next week! Or whatever week you read the next article I have yet to write. Unless that future article led you back to this one. I don’t know. My brain hurts. Time is hard.