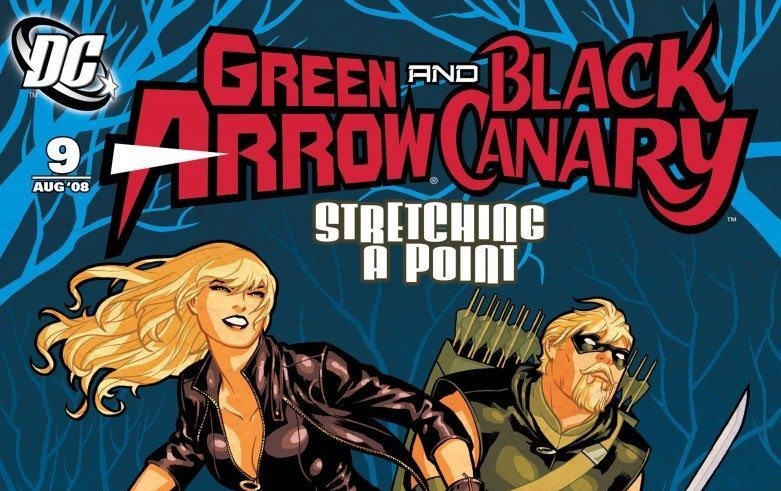 Finally! Another edition of This Week in Comic Book History is here! After a brief hiatus in the month of May (let’s be honest, May is kind of a meh month anyway) I am back to bring you some of the most fun and bizarre comics that came out sometime around this month.

If you have ever read this column before, and still remember it today, you are a great fan and I cherish you deeply. The rest of you? Welcome aboard! All are welcome here. To get this article restarted correctly, and with the return of the pre-New 52 into the current DC Universe with the Rebirth initiative, it only felt right to look back at some of the better teams and couples we’ve lost in the last few years. And what better couple to start with than the always dysfunctional Green Arrow and Black Canary? No better couple, that’s what. Fortunately, they had a short series from 2007 to 2011 conveniently titled GREEN ARROW AND BLACK CANARY. (Simple titles rule.) This week in 2008 marked the release of issue #9 of that series.

READ: Have you been missing This Week in Comic Book History? Go check out some classics, like our look at LOBO #51!

One of the most important storytelling elements that was taken away when DC Comics relaunched in 2011 with the New 52 was decades of pre-established relationships between characters. That’s one of the many reasons it seemed to take the New 52 so long to really get its feet under itself. The books that were able to really take off, like BATMAN and GREEN LANTERN—your opinion on the quality aside—were because they were allowed to keep large parts of their continuity intact. Other characters, like Green Arrow and Black Canary, were essentially wiped clean and forced to start from scratch again. This meant that every time lower-tier characters like Plastic Man or Black Lightening met another hero, they were forced to reestablish their relationship. Many times, they would just end up where they off before the New 52 anyway.

This caused a lot of stories to drag. Rather than actually telling the superheroes’ tales, writers had to show you why character X and character Y were friends rather than say, “Hey, these guys have known each other for years and have had countless adventures together. Let me tell you their latest story.” Looking back at a comic that came out before the New 52, like GREEN ARROW AND BLACK CANARY #9, really emphasizes this point because this issue hits the ground running and is much better off for it. 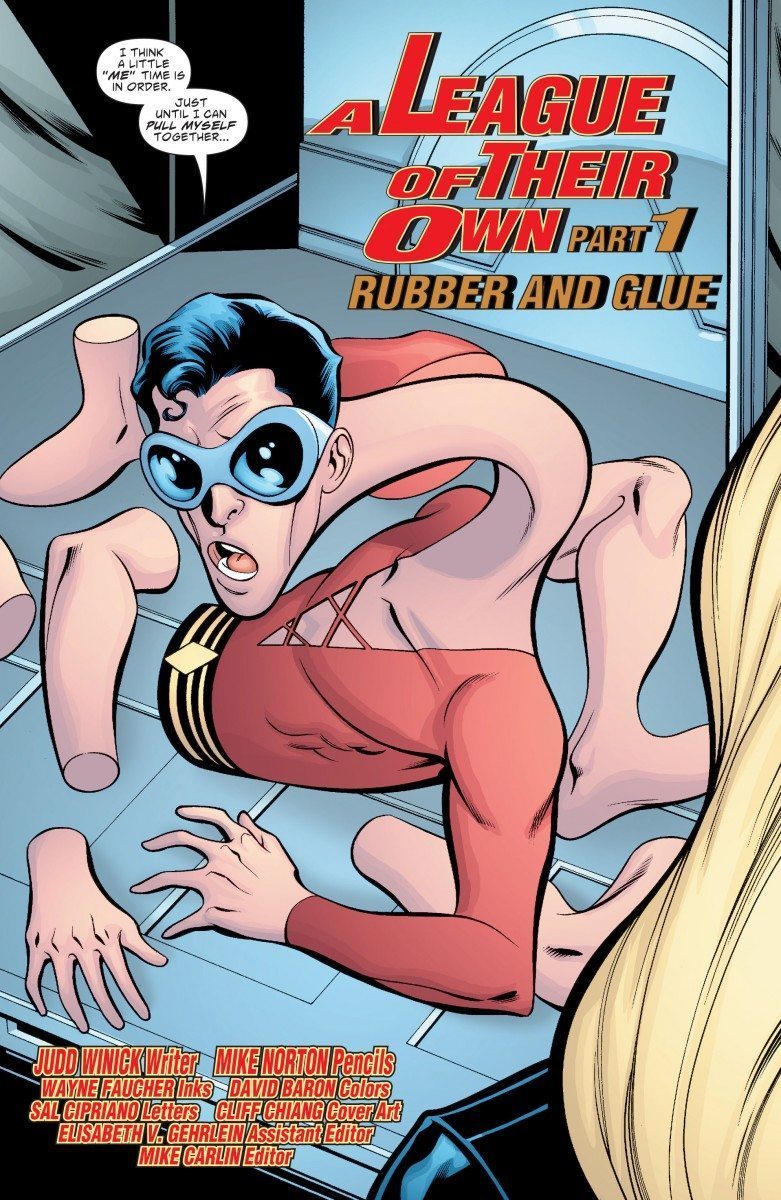 The first thing you may notice about this comic is that the cover says August 2008. I know I’ve played loose with the whole “This Week” thing, but according to DC Comics’ own website, this comic came out in June 2008. So I’m counting it, damn it.

In any case, the story begins with Green Arrow and Black Canary trying to figure out what to do with a cryogenically frozen Plastic Man that they accidentally found. They were actually looking for Green Arrow’s kidnapped son, Connor, but this is all they could find and they aren’t pleased.

READ: Green Arrow isn’t the only green superhero This Week in Comic Book History has explored. Check out our look at GREEN LANTERN #12!

It turns out that Plastic Man got kidnapped while he was creepily watching some women sunbathe on a roof. Normally, I’d make a joke here, but it’s not cool to stare at women uninvited—especially when you have super stretchy superpowers. If you fit into this category, dear reader, just ask if you can be a creep first. Who knows? The answer could be yes. But in reality, the answer will be no 100% of the time. Don’t be a creeper, guys.

Public service announcement aside, it’s at this point that the established friendship between all three characters really starts to shine through. Green Arrow and Black Canary have no problem communicating their disgust of Plastic Man.. And, like with any banter between good friends, Plastic Man doesn’t get offended. He doesn’t instantly try to fight them to protect his name, and when he hears that his friends are looking for Connor, he immediately offers to help. They don’t need to create any great conflict that brings these heroes together. The common friendship they have established through the years is enough for good people to want to work together. 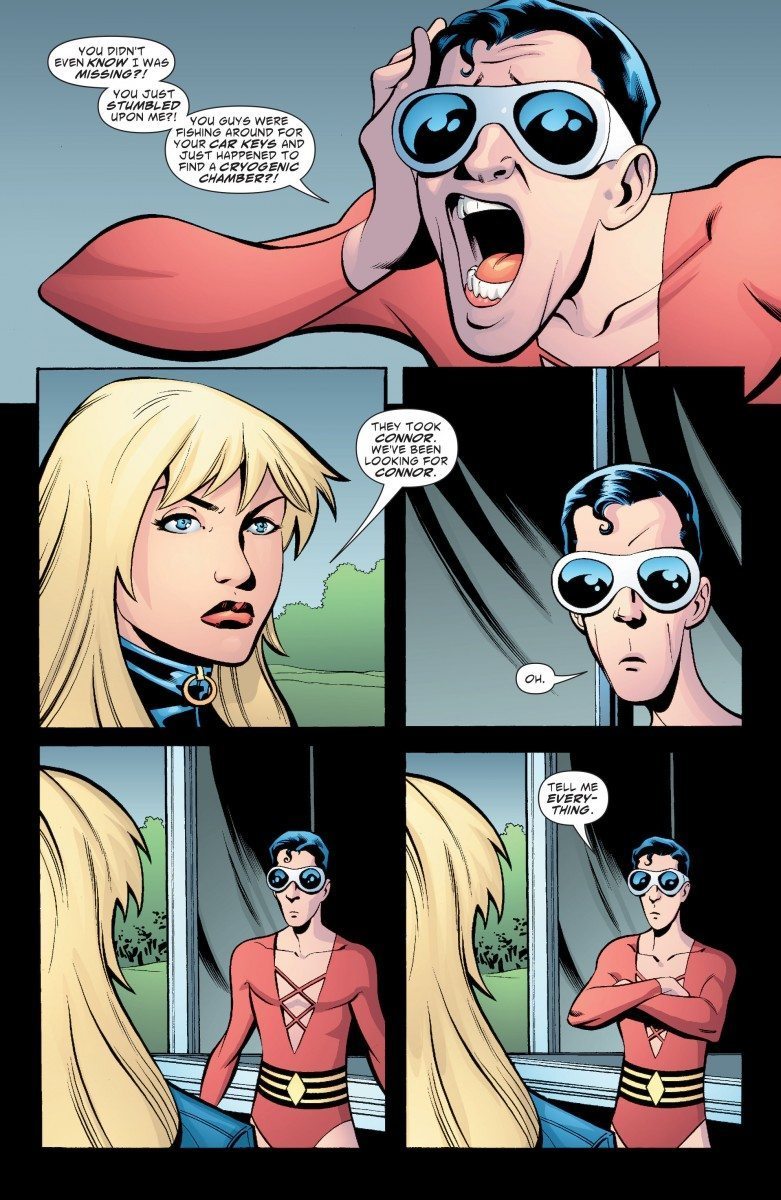 Elsewhere, the latest Speedy, Mia Dearden, is trailing the truck that had Plastic Man’s body in it. Her involvement really helps illustrate how important the concept of family once was in the DC Universe. It’s one of the key themes in the entire GREEN ARROW AND BLACK CANARY series. Most people think of DC families and instantly go to Batman or Superman, but Green Arrow had as large a family as either of them. If REBIRTH #1 is any indication, DC seems to really have noticed how important this aspect of Green Arrow was. His family helps ground him and adds a gravity to his actions that just isn’t there when he is working alone. His decisions affect all those around him. He sent Speedy to track the truck, and now it’s his responsibility to keep her safe.

Back to the story, Speedy and a man who steals future tech are ambushed by a group of superpowered beings who have some of the most generic create-a-villain powers I have ever seen. One is just invincible. It turns out in later issues that he’s a vampire, which is cool, but in this story, he’s just a guy who can’t die and wears purple, which isn’t really cool at all. Another guy does all kinds of telepathy and matter control. There’s a Yeti and a samurai, too, which is always fun. A guy with four arms who shoots guns is there, as well. Lastly, my personal favorite: a woman who can create flaming daggers with her bare hands rounds out the team. If you’re going to give someone generic powers, flaming weapons are the way to go. But, overall, it’s a bland group. Honestly, if it was just the Yeti and the woman with flaming daggers, they’d be way cooler. I could easily see that being its own spinoff. They could both be cops and the Yeti would definitely be too old for this sh*t. I want that now. 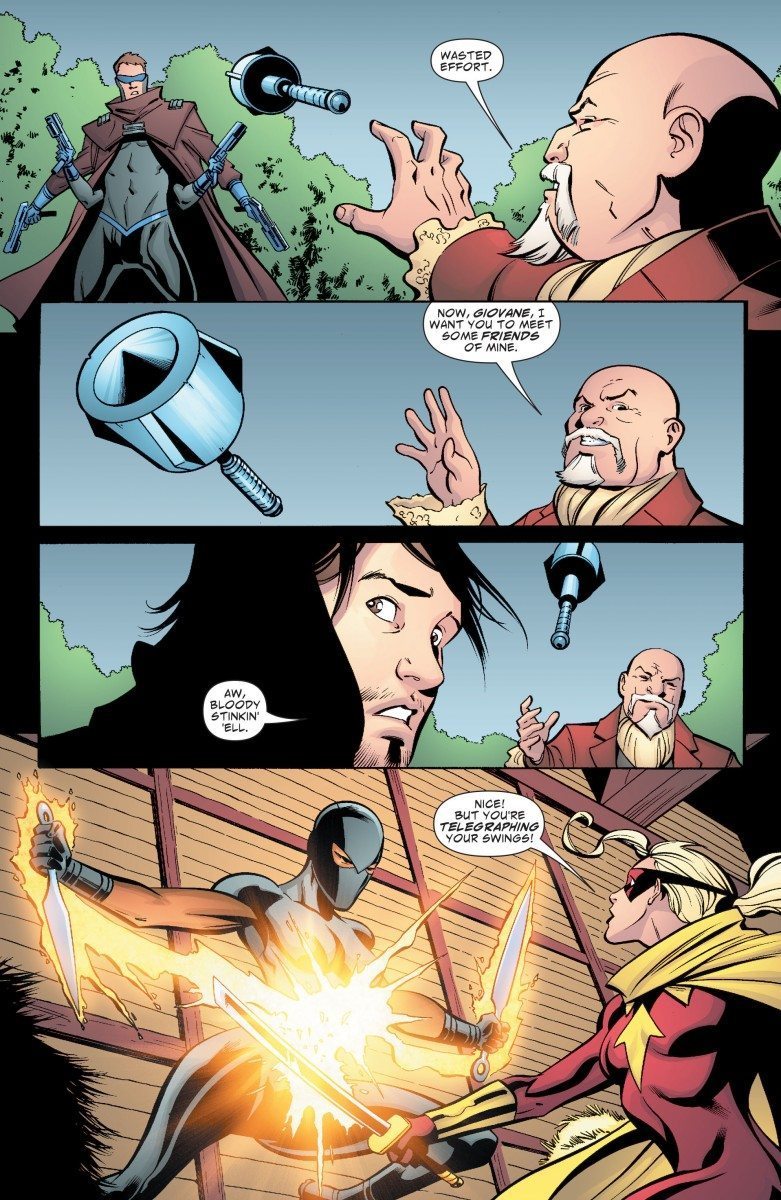 The rest of the story is straight action. Speedy and the thief she’s with, who basically has Thor’s hammer and Batman’s gadgets, end up doing a pretty decent job fighting off the group who claims to be the League of Assassins. It’s also at this point that Mike Norton’s art goes from great to outstanding. His creative use of arrows and bizarrely defined supervillain powers is really dynamic and exciting during this whole section—which is good because, at this point, the story is pretty much over.

Plastic Man turns into a blimp—because why not?—Green Arrow and Black Canary start their sprint to help Speedy, and Batman shows up in the last panel. (This comic is great on its own, but Batman makes everything better. Batman is the bacon of comic books.)

And there we have it. Another big fight is set up for issue #10, and there are some great character moments all around. A large “cheers” to Judd Winick, who did a phenomenal job on this series. And an even larger “cheers” to everyone who made it this far into the article. Next week, we’ll be looking at more of Plastic Man’s greatest perverted hits. (Just kidding. That would suck.) See you next week!