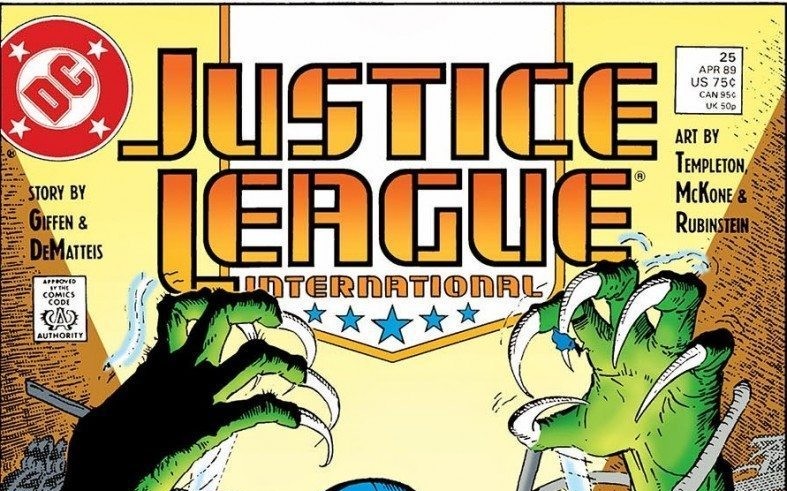 It’s another week and that’s good news because it means another This Week in Comic Book History! If you are a regular reader of this article (and if you aren’t, you definitely should be), then you may have noticed that I spent most of last week’s article gushing over how great Guy Gardner is. If you enjoyed that, boy do I have a treat for you. This week, the trend of gushing over D-list DC Comics characters continues as we analyse the vampire-hunting man date between Booster Gold and Blue Beetle in JUSTICE LEAGUE INTERNATIONAL #25! If you didn’t enjoy it, sorry?

READ: Like Guy Gardner as much as I do? Check out last week’s This Week in Comic Book History with our look at GREEN LANTERN #12!

Released in April of 1989, JUSTICE LEAGUE INTERNATIONAL #25 is part of one of the greatest Justice League International runs that DC Comics has produced. That isn’t saying much, though. Most efforts at a Justice League International series tend to fail rather quickly. The newest attempt at the series in 2011 only lasted a mere 12 issues before DC Comics decided to cancel the series. And to an extent, that’s not surprising. At its core, the series is dedicated to fleshing out lesser-known DC Comics characters. This means that issues without a cameo from a member of the Justice League proper are going to be a hard sell for casual and hardcore DC Comics fans alike. For many, a road trip starring almost exclusively Booster Gold and Blue Beetle is not the most enticing premise. The reason the series in the 1980s was able to have stories like this for almost 9 years (with a few title changes along the way, but the same basic characters at the heart of the story) was because the stories were engrossing enough for people to want to read the next issue no matter what was happening. A huge reason for this was writer J. M. DeMatteis’ ability to give lesser characters unique voices and make them seem like stars. While heroes like Batman are still a tier above everyone in this series in terms of respect from other DC Comics characters, the Justice League International members are never portrayed as completely outclassed. They become almost equals and not one-note gags. That being said, their adventures are quite ridiculous at times. They’d have to be to be part of this article, right? Let’s talk about those. 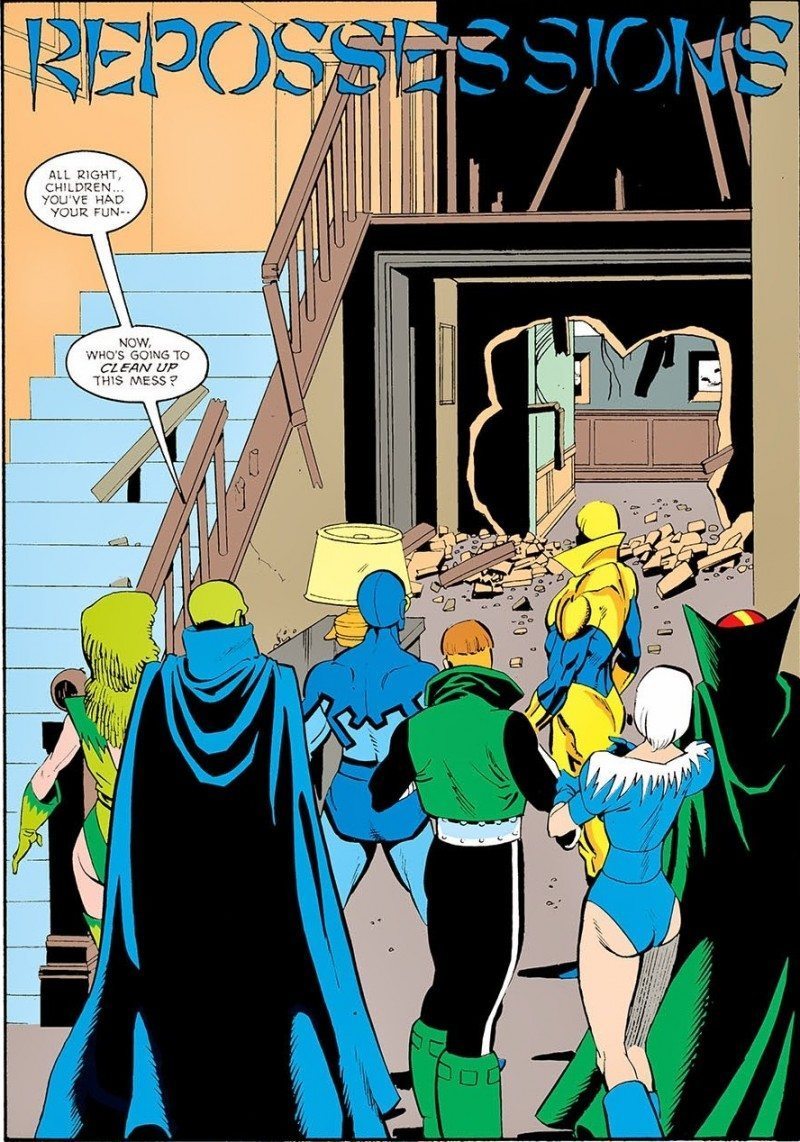 Our story opens with something anyone who has ever had roommates and thrown a party with said roommates can relate to. Who’s going to clean up this mess? But, when it comes to the Justice League International, it’s never as simple as a party getting out of hand. The mess was actually caused by a group of party-crashing warriors called Khunds who were hanging out in a box of roach killer, the perfect hiding spot. The Justice League International members defeat them rather easily because how dangerous can people hanging out in a box of roach killer really be? The house kind of goes to hell in the battle, though. No one wants to clean it up, but two people who definitely don’t want to deal with this nonsense are Booster Gold and Blue Beetle.

Luckily for them, they also work as part-time repo men because superheroing alone doesn’t pay the bills. It’s small details like this that really make these character relatable in a way others simply aren’t. Batman is a billionaire. Superman can be anywhere in an instant, so of course he can work a full time job and still save the world on his lunch break. Blue Beetle and Booster Gold aren’t quite so lucky. They have to scrape together whatever money they can or risk having to get a 9-5. Then, they’d only be able to perform their superhero duties on their days off and that would be an absolutely terrible comic. And the majority of us can relate much easier with the latter example of trying to have enough money to pursue your dreams no matter the cost. It’s simple, but astoundingly effective. 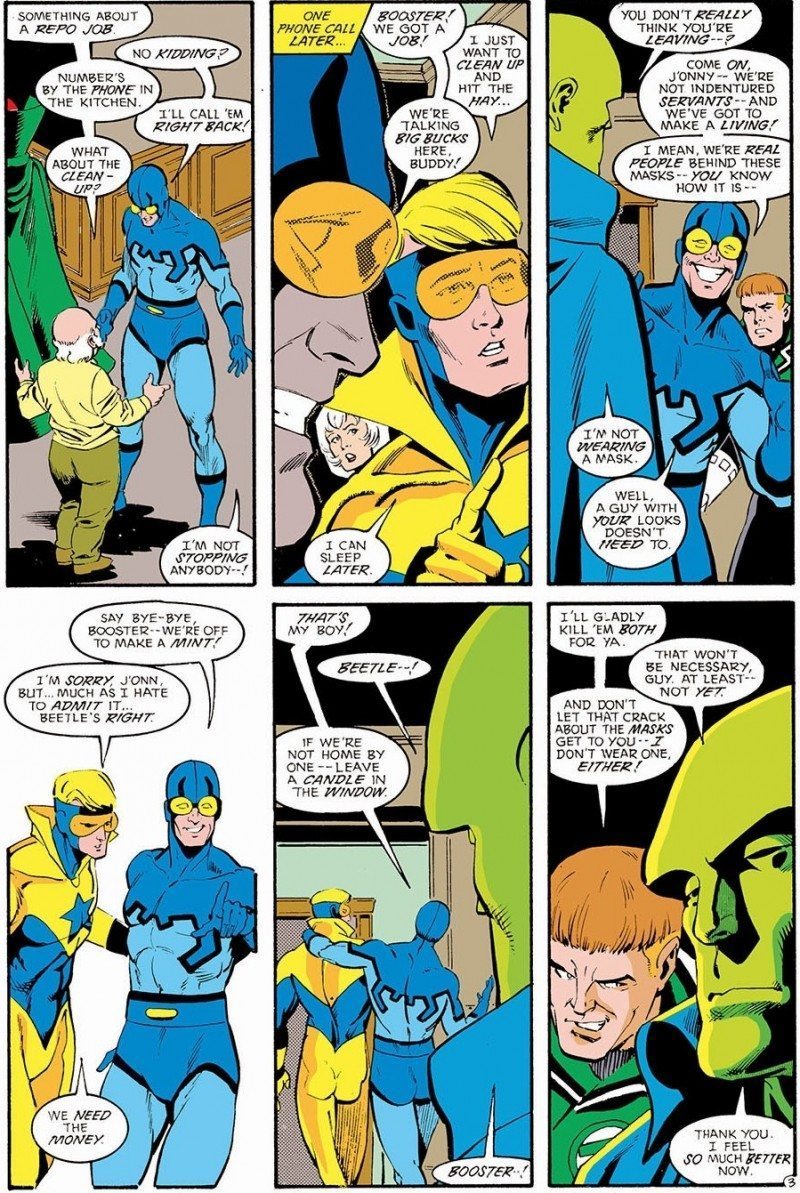 When they arrive at the office of the man who hired them, they’re informed that their job is to bring back a vampire hiding in the sewers of the city. At first they laugh at the notion of vampires being real. Then, Blue Beetle points out that he and Booster Gold are not only the teammates of a green alien from Mars and an ice goddess, but he’s literally in a ship shaped like a giant blue bug sitting next to a time traveler, Booster Gold. Logically pointing out the ridiculous nature of the fictional world that I’m reading about is almost a guaranteed way to warm my heart.

The duo (Blooster Beetold? It’s all I’ve got. Their names are not set up for a fun pun) eventually arrive in the sewer to hunt for the elusive vampire. It’s not long before Blue Beetle is drowning (or vomiting profusely) in a very small amount of sewage water that we later see him sitting in without issue. The dialogue in this section is spectacular. Here is just a small taste of what had me laughing awkwardly to myself while those around me looked on in confusion and concern.

“Beetle, are you alright?”

The fact that he goes from being able to say yuck to instantly drowning (or vomiting) and being unable to speak is the kind of dumb humor that I love and that this article is built on. When they do eventually find the vampire, things go from fun to incredibly dark and depressing extremely quickly. So if you were planning on smiling at the end of this article, well, sorry. It’s time to get really sad. It turns out that the vampire, named Caitiff, is the last of his kind. The rest of his people, including his wife and child, were murdered during experiments by the same people who hired Booster Gold and Blue Beetle to capture him. Sad, right? It gets worse. 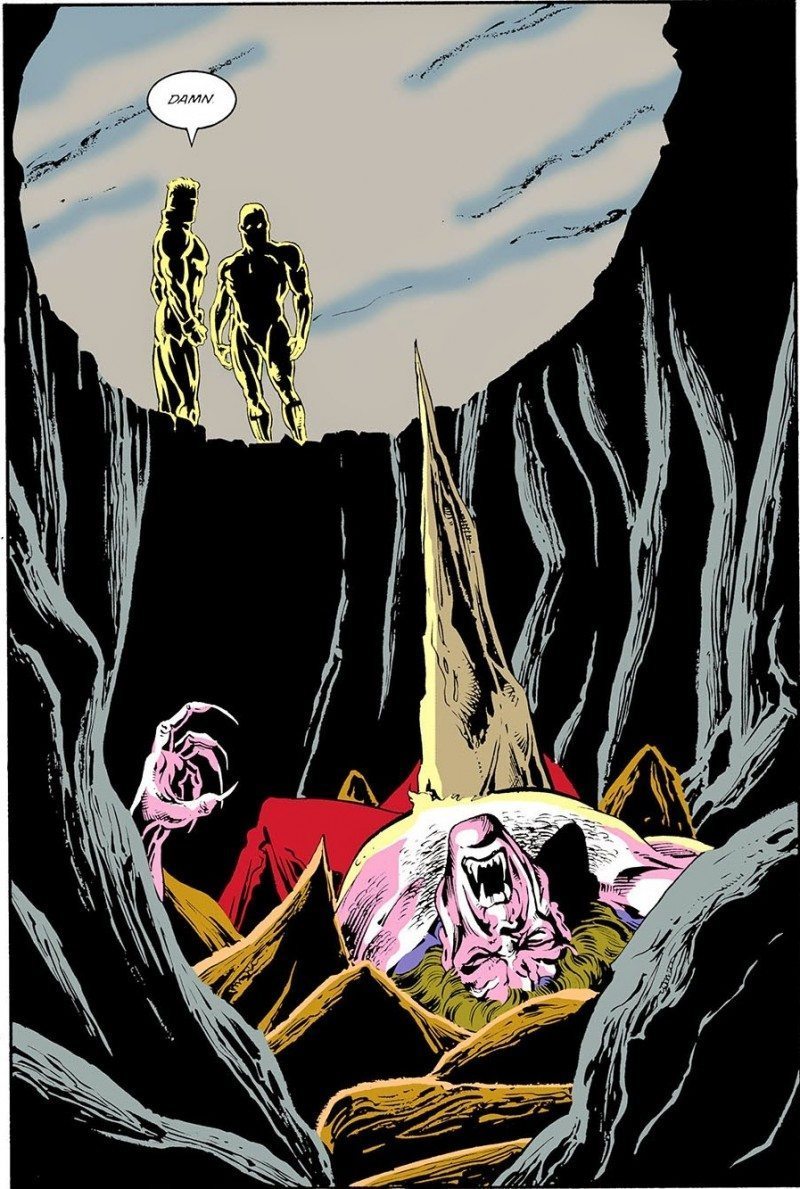 Caitiff eventually flees Blooster Beetold because he clearly has trust issues with the human race. When Booster and Beetle eventually catch up to him, hoping to help, they find he committed suicide by jumping on a jagged spike at the bottom of a deep pit. It’s a really heart-wrenching story for a comic that starts off so fun and goofy. It’s also really not a great ending to make jokes about. Luckily, we have Guy Gardner.

READ: Rafael Albuquerque drew Blue Beetle, and we interviewed him! Check it out.

The two come home, completely broken by their experience. Unbeknownst to them, Guy Gardner is still holding a huge grudge about them not staying to clean up the post party mess. He waits for them to come through the doorway where he is holding the construct of a 200-pound lead weight over their heads which clearly means he is straight up ready to murder them. No one takes things too far like Guy. He really is the best. 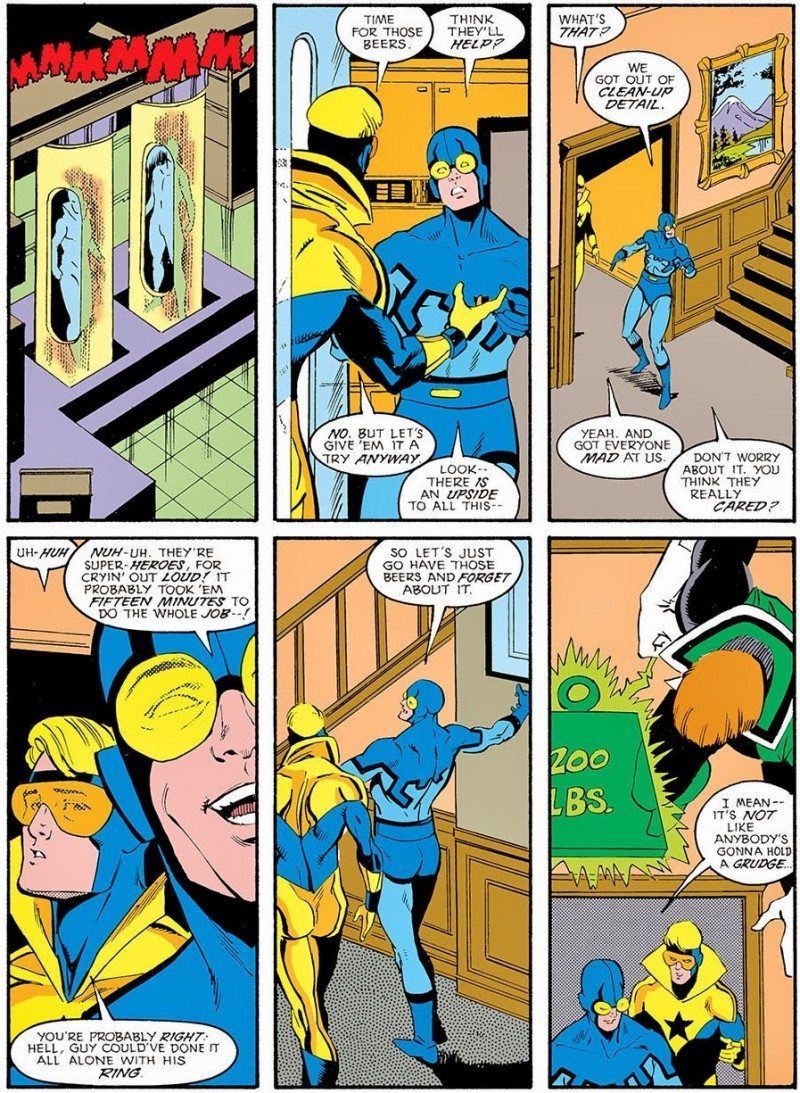 And with that, we finish another week of This Week in Comic Book History. We got taken through a range of emotions this week. Also, I definitely lied last week about there being something that breathes fire in this article. Clearly, I can’t be trusted. Maybe next week we’ll have more anvil murder? But probably not. See you then!