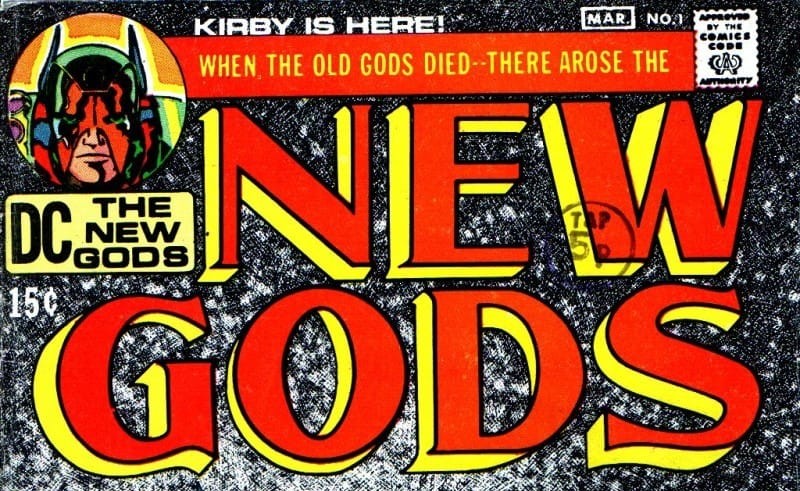 Do you love superheroes? Of course, you do. Why else would you be reading this article? Unless you accidentally found it, and if that’s the case, welcome to ComicsVerse! Stay a while. Have a look around. It’s great. Anyway, if you love superheroes, there’s one man you should thank for the current state of the Marvel and DC Universe. That man is Jack Kirby. And nowhere was Jack Kirby given as much free range to let his creativity go as he was in March of 1971 when he released the NEW GODS #1.

READ: Interested in the current version of the New Gods? Check out our review of JUSTICE LEAGUE #45!

Jack Kirby’s influence is as strong today as it ever was. His creations will continue to be a driving force at both Marvel and DC comics for years to come. Aside from creating the New Gods, and with it the greatest foil to the Justice League in Darkseid, he also helped create some of the most iconic Marvel heroes. Think of any Avenger character and Jack Kirby probably had a role in creating him. Characters like the Hulk, Thor, Iron Man, Black Panther, and Captain America are all part of the creative mind of Jack Kirby. Not to mention, he also helped create the Fantastic Four, the team that started the entire Marvel age of superheroes. He earned the nickname “The King” for a reason. Those stories are for another time, though. This is a look at the story of the New Gods. If you ever wondered what it would look like if Jack Kirby’s creativity were let completely loose on the world, then the New Gods is what you’ve been looking for. 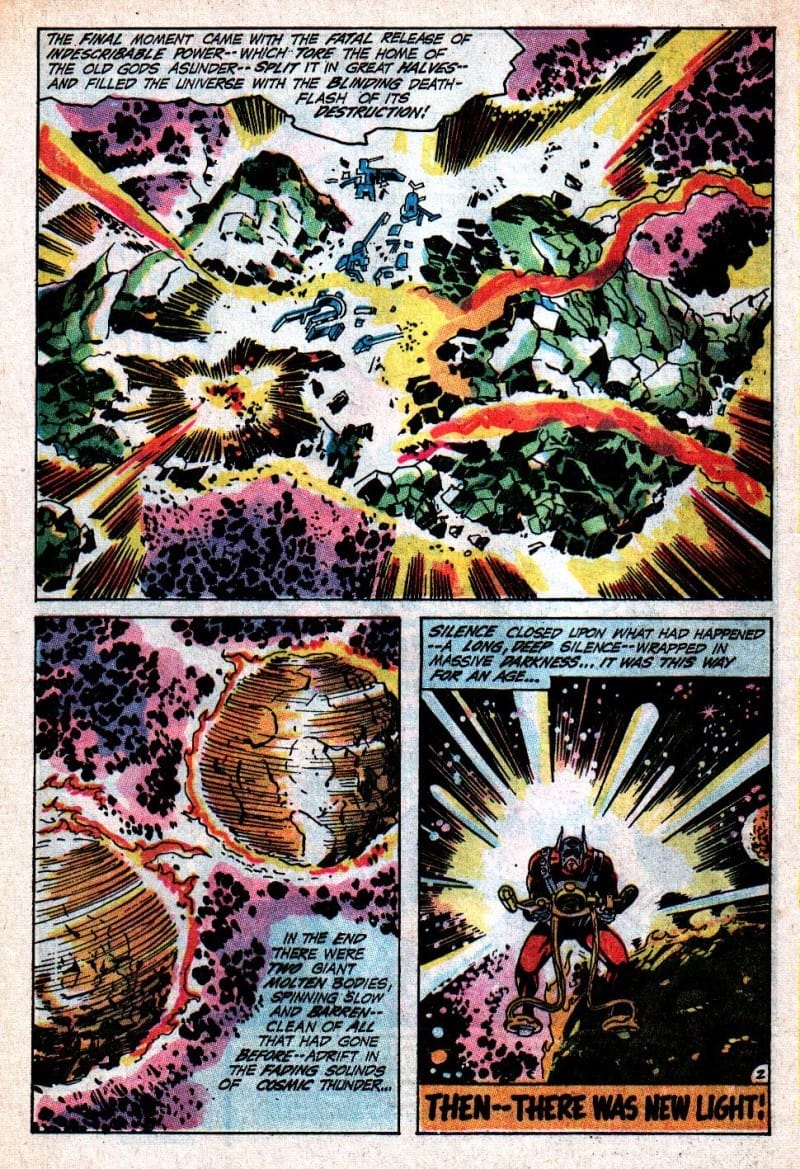 The story starts with the death of the old gods in a war that completely tore apart their planet into two new planets, New Genesis and Apokolips. The two planets are exact parallels, with New Genesis fighting for good and Apokolips fighting for evil. Jack Kirby starts out his story with the death of all gods and their home world. He is not playing around when it comes to the scope of this story. Out of that battle, the New Gods were created. Like Orion, for example, whose first words are “I have heard the word–it is battle!” There are no dull moments here folks.

On his way back to New Genesis he is passed by Lightray who seems to have the power over, brace yourself, light. Orion claims they are good friends, but then proceeds to constantly insult him. After Lightray tries to get Orion to laugh, Orion decides to call him a prattling novice. It’s rude, but in a really classy way. It’s then revealed that the High-Father has called Orion back to New Genesis. The High-Father is the leader of New Genesis. He also might be part orangutan? His facial hair definitely has a primate feel to it. 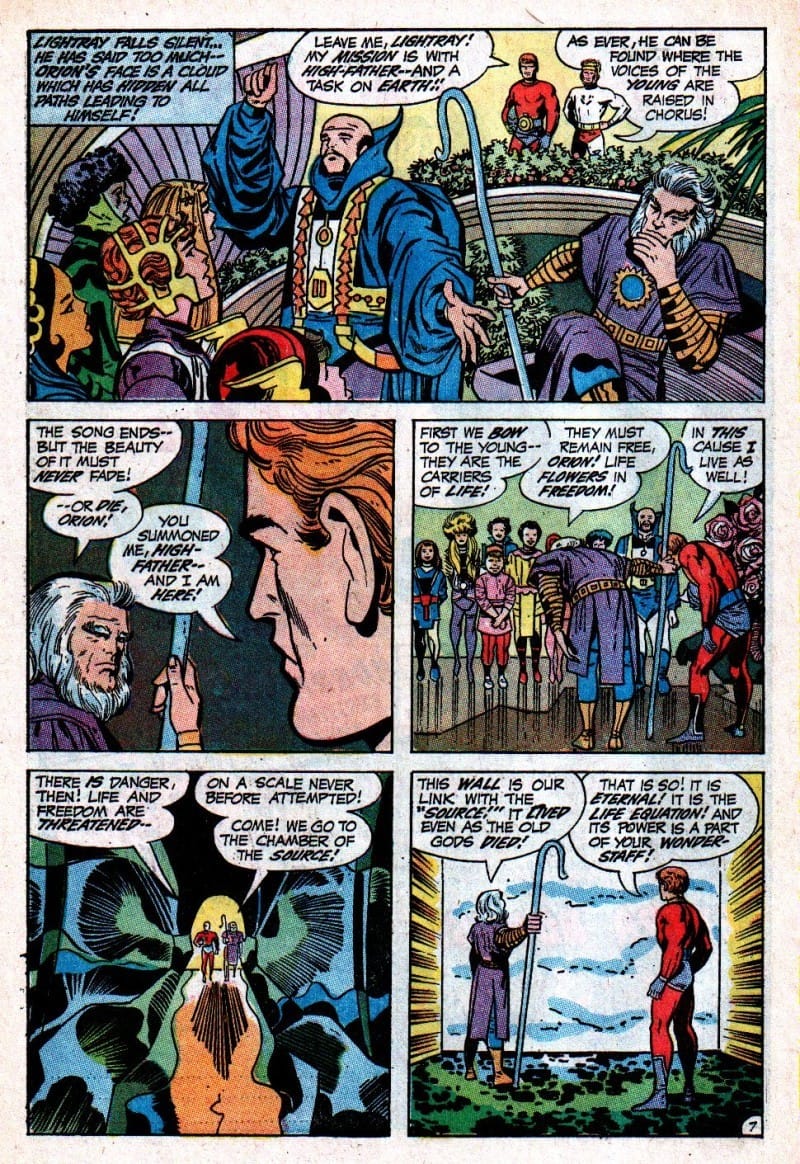 Next, we are introduced to the two concepts that had the largest effects on the foundation of the DC universe. The first is the anti-life equation. This is located in the source, which guides the New Gods in defending the universe from the enemies of Apokolips. The next is Metron and the Mobius Chair. You may have seen Batman riding around in this in the latest Justice League arc. Metron has a constant and all-consuming thirst for knowledge. Are you confused and overwhelmed yet? Don’t be we’re just getting started. The amount of world building Jack Kirby crams into a single comic is mind blowing.

READ: Check out the current state of more of Jack Kirby’s creation with our review of ALL NEW ALL DIFFERENT AVENGERS #6!

The source warns them that Orion must go to Apokolips, then Earth, then to war. It’s very ominous. Orion follows the order without question, and we get a tease that, spoiler alert in an article all about spoiling old comic books, Orion is Darkseid’s son, unbeknownst to him. Next, we get our first look at Apokolips. It can best be described as a giant ball of death and depression with exploding furnaces that cover large portions of the planet. So, not ideal for vacations. 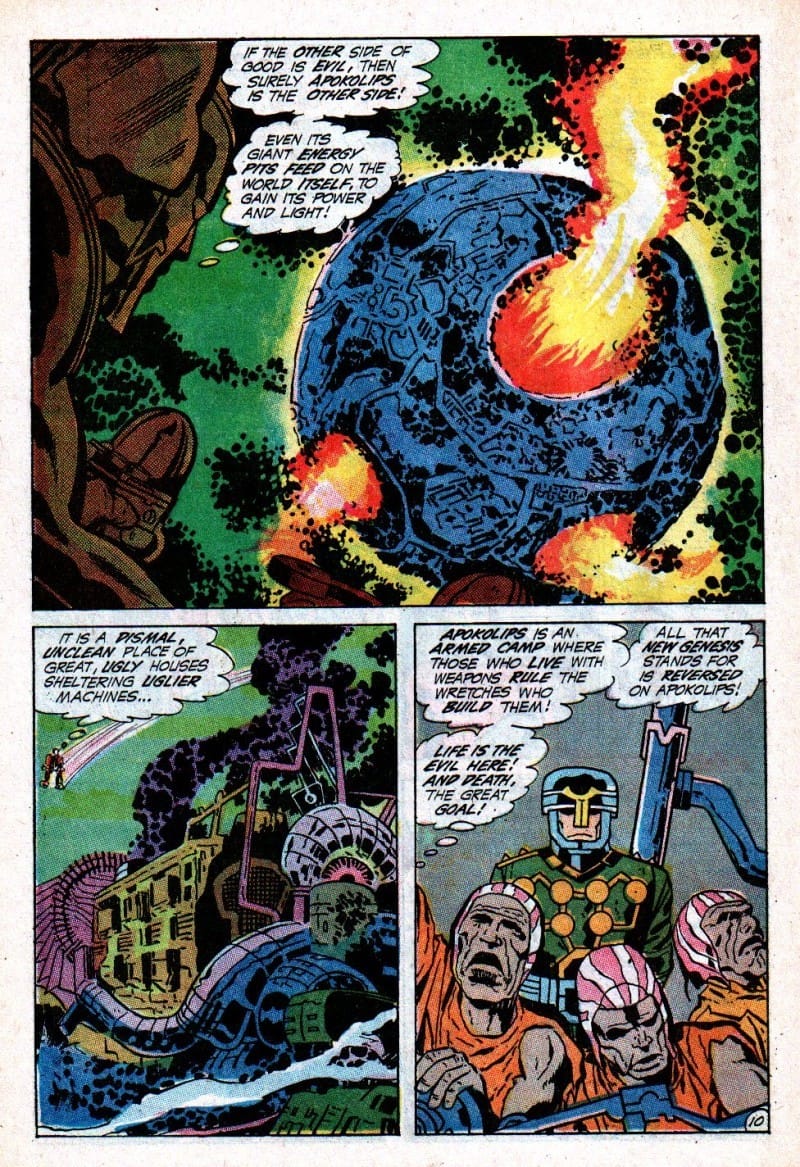 Orion is instantly assaulted by Darkseid’s parademons. It is here we get our first look at Kirby’s actions scenes and his classic designs that really create a sense of movement and pace that is unparalleled. Kirby had such a unique and distinct art style that it still holds up today. If his work were placed back on shelves today, it would instantly be some of the most impressive and fun art out.

After fighting the parademons off, we get our first look at Darkseid, but only in statue form. Honestly, if I owned my own planet, you better believe I would cover that bad boy in statues of myself. I can’t fault him for that. Orion’s battle is far from over. The next wave of the Apokolips welcoming committee is a group of pink, wrinkly face guys in blue jumpsuits that get taken out with relative ease. Unfortunately, behind them is a group of blue jumpsuit-wearing soldiers with metal rhino horns and riding giant dogs. It’s as amazing as it sounds. 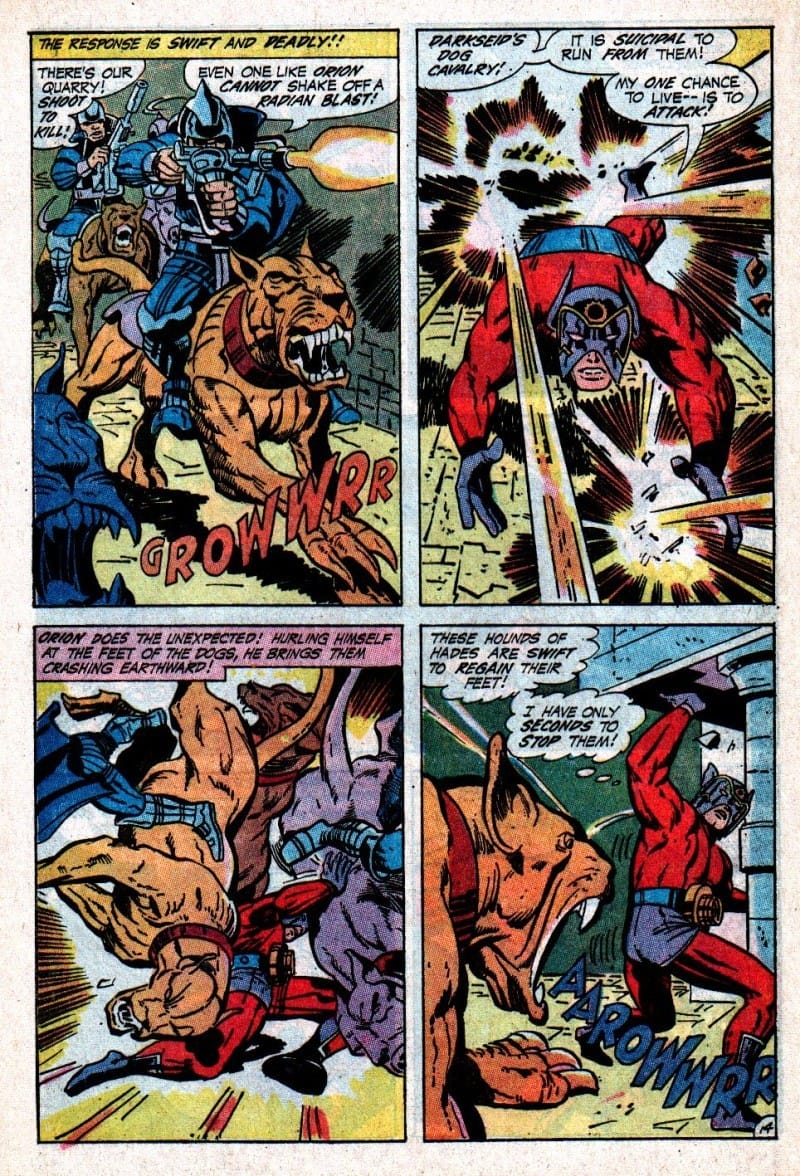 After dropping a roof on the dogs, Orion just says screw it and runs away. He reaches the capital only to find the leaders of Apokolips gone. He does meet Kalibak though who is a caveman I assume? He always wears insanely short jean shorts and beats people with pipes. Jack Kirby at his creative best you guys. Before that fight can happen though, Metron interrupts to brag about how he already knows everything. He tells Orion Darkseid is creating boom tubes to Earth to capture humans for testing.

This part is really interesting. Orion is upset because Darkseid violated a rule where humans were not to be taken through the boom tubes to the worlds of Apokolips or New Genesis. It really shows how the New Gods have much larger issues than happening on Earth. They see the Earthlings as something to be protected. They are seen as something that doesn’t even deserve to be a part in the war between New Genesis and Apokolips. This is really why so many writers come back to the New Gods as foils for the Justice League. They are beyond the level that anything on Earth is, and it is established in the very first issue. Their problems make anything else on Earth look trivial. And, for the Justice League to work, you need a threat that makes anything else on Earth look inferior by comparison. 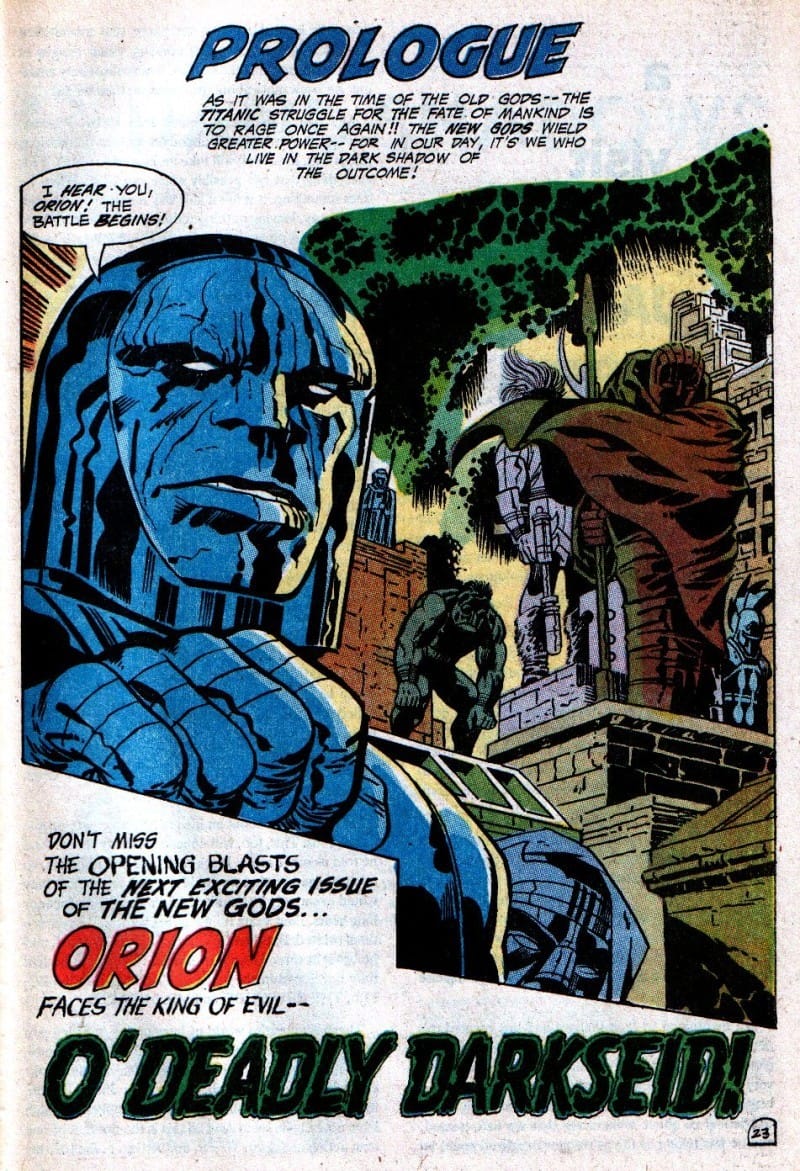 Orion saves the captured humans and booms to Earth where Darkseid has already begun his assault. The war has begun between gods, and the battlefield is Earth. Honestly, no one builds a world quite like Kirby.