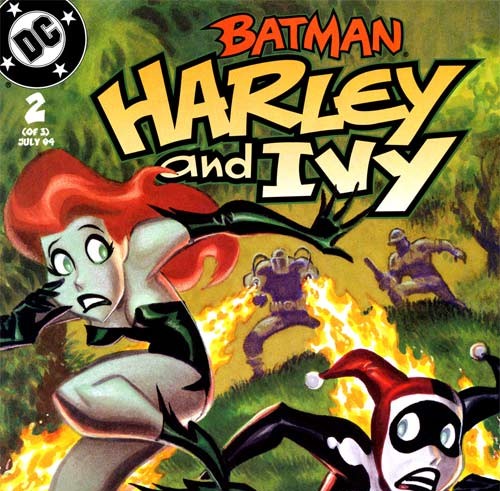 That would make far too much sense, though. Today, we’re going to look at the real heart of the 4th of July: Hanging out with your friends and getting into an outrageous amount of trouble. In the spirit of friendship, we’re going to look at BATMAN: HARLEY AND IVY #2, released in July of 2004. It’s time to alter our minds with some rare jungle plants, another 4th of July tradition.

READ: This Week in Comic Book History has more fun team-ups with our look at GREEN ARROW AND BLACK CANARY #9!

Before we begin, though, it’s important to point out what makes Harley Quinn and Poison Ivy’s relationship so important to who these characters are. Individually, Harley Quinn and Poison Ivy are fairly one-dimensional characters. Ivy has an obsession with plants and uses their properties and her connection to plants in criminal ways. It’s the same kind of design many older Batman villains fell into. The Riddler does riddles, Mr. Freeze is into cold stuff, Clayface can manipulate his body like clay, and Poison Ivy likes plants. Characters like her were designed with one purpose in mind that many still have to abide by today. Harley Quinn is similar. Meant initially as a one-off character in BATMAN: THE ANIMATED SERIES, she was only intended to be a fun sidekick for the Joker. After a great reception for the character, she began to appear in other DC stories, but always as the Joker’s sidekick and abused love interest.

It wasn’t until they began to partner together and become friends that the two characters became more dynamic. They were no longer people with singular driving forces. Each now had to deal with trying to maintain a friendship. Beyond singular villainous goals, they now become humanized. And, let’s be honest: It’s hard to relate to someone who is willing to murder in the defense of plant life and someone dating a person as insane as the Joker. Even though we all have that friend dating someone we think is kind of off, it’s hard to imagine that they’re Joker crazy. We do all have good friends, though, and their relationship helps make them relatable in this way. They are allowed to show emotions beyond the naive (in Harley’s case) and the homicidal (in Ivy’s). And no better team has an understanding of this dynamic than Paul Dini and Bruce Timm. To really show why, let’s get into the story. 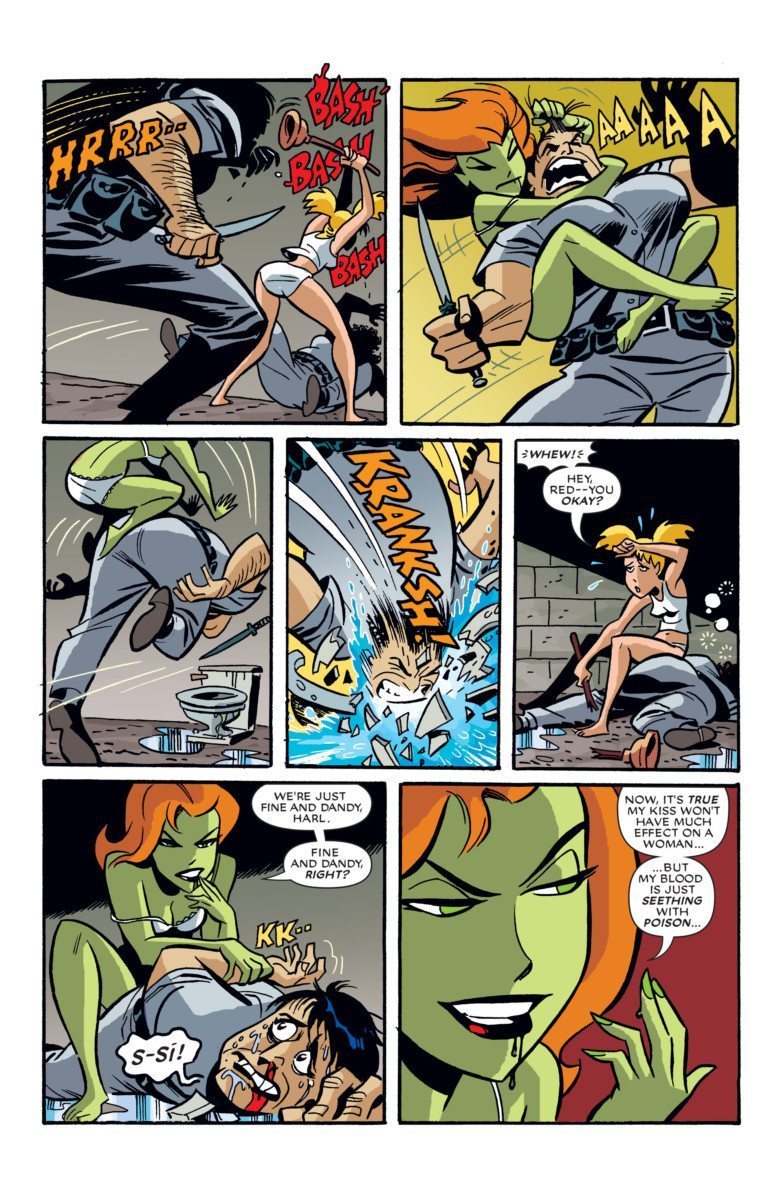 Our story begins simply enough. Harley and Ivy have arrived in Costa Verde to search for a zombie plant Ivy could use to control all of Gotham. Simple. Unfortunately, when they arrive, they are immediately arrested, and we find our villains fighting off some prison guards. It’s also at this point that it becomes apparent how violent and brutal Harley and Ivy are. There is a lot of gruesome murder (and near-murder) in this one, folks. Don’t let Bruce Timm’s happy cartoonish art fool you. These two want blood.

READ: Interested in what Ivy is doing now? Check out our review of POISON IVY: CYCLE OF LIFE AND DEATH #5!

Harley gets the first crack at murder when she beats the first prison guard’s face to pieces with a plunger and breaks the nearby toilet with the face of the second guard. Ivy isn’t quite satisfied that their brains are now mush and wants to poison the guards with her blood.

I’ll be honest with you guys. I chose this comic because I thought it would be about friendship and having a silly adventure in the jungle. But no. This book is about murder. Cold-blooded murder. And it gets worse. (Or better, depending on your level of sanity.) 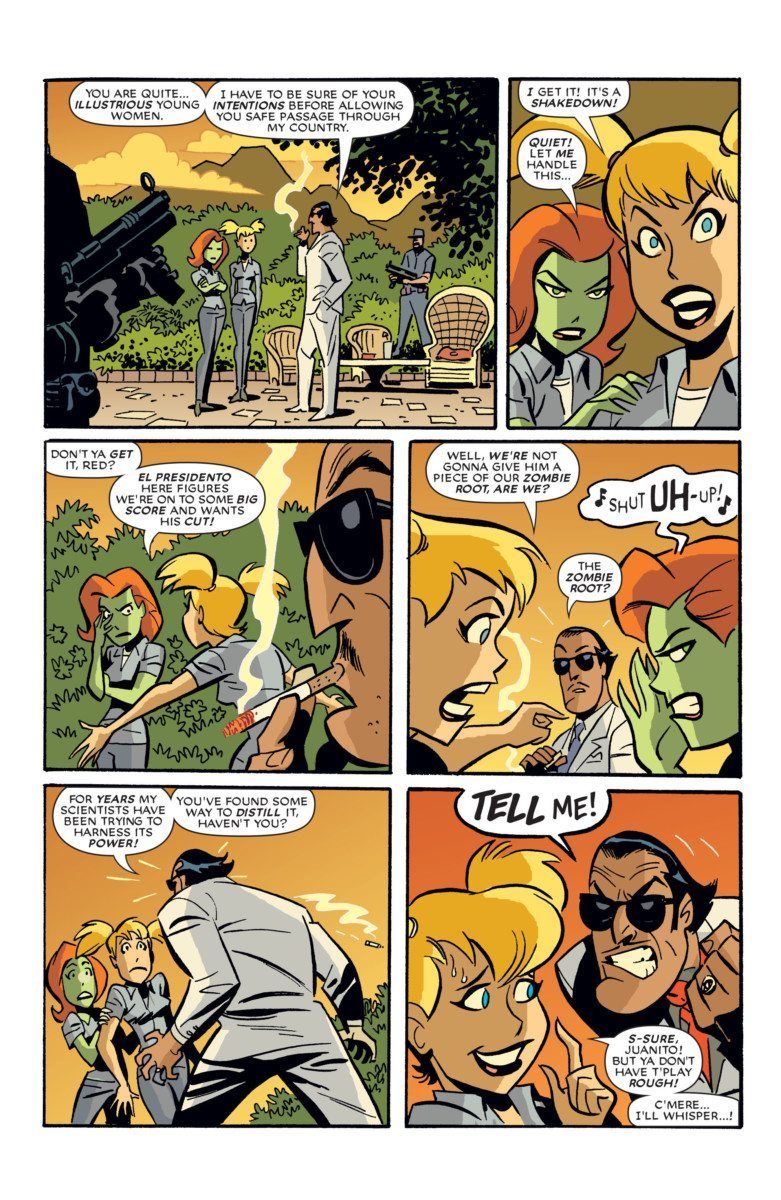 The two are eventually taken from the prison by military men who decide to just blow up the prison wall rather than using the door—which is badass, but it can’t be good for the economy to just go around blowing up walls when there are perfectly good doors already in place. But “badass” is always the best approach, in this humble writer’s opinion. The soldiers take the duo to the President of Costa Verde, and, long story short, he knows the location of the zombie plant, so Ivy mind-control kisses him—Women. Am I right?—and discovers where the plant is. It’s at this point Harley also breaks a man’s face with the end of a table and murders a group of soldiers with a sub-machine gun. The story wastes no time diving back into the violence.

They then steal the president’s car that also doubles as a tank. It is also pretty badass. If you take anything away from this book, it should be that the team of Harvey and Ivy will murder you violently and then do something badass. I don’t know if there’s a life lesson in there or not, but I’m assuming there is. I’m not a scholar though. Figuring out life lessons is way above my pay grade. I’m here to make juvenile jokes. 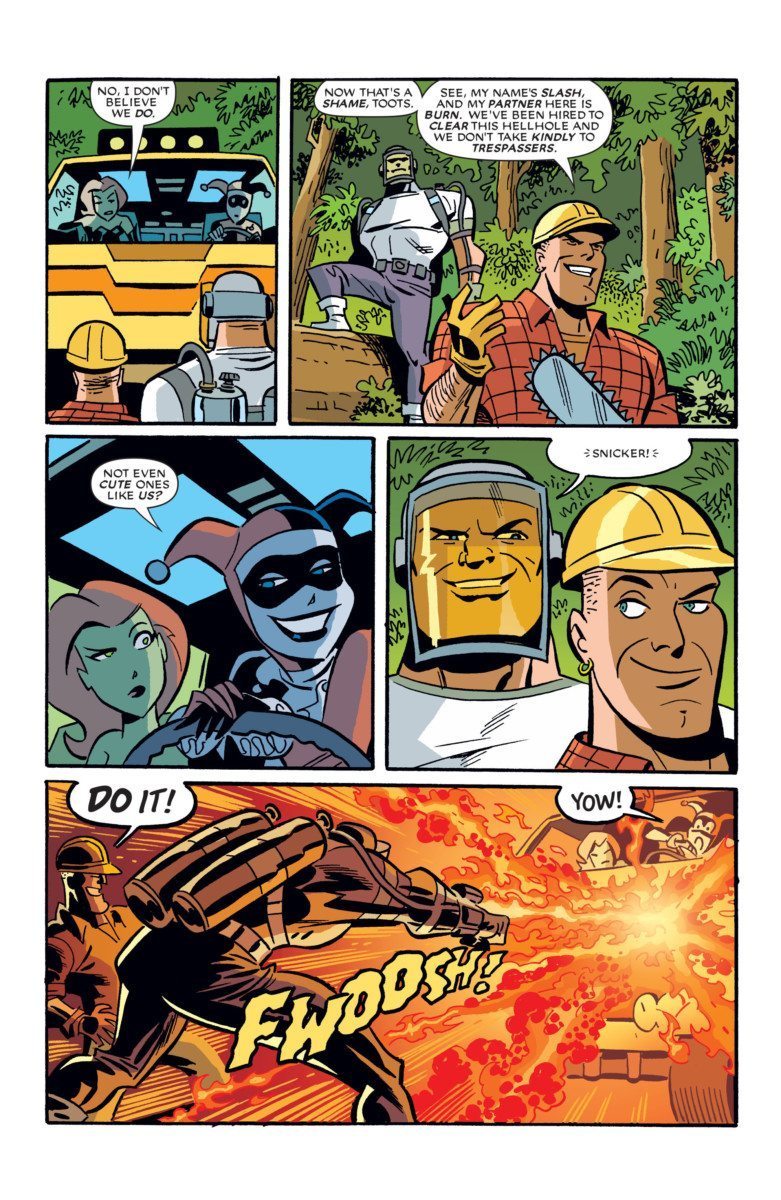 When they arrive in the jungle, they run into two gentlemen who want nothing more than to cut down the entire rain forest. One has a device on his body that shoots flames, and the other has a chainsaw instead of a hand. If you’re going to make a generic villain, chainsaw hand is a pretty damn good way to go. It says, “I’m clearly insane and evil,” without you having to ever think about it. Of course, it’s really hard to tell who the bad guys are after what Harley and Ivy do to these guys. If you thought all the beatings and gun murder were violent before, it’s nothing compared to how these two go out. The man with the chainsaw hand is electrocuted to death by Harley. That’s fine. He was trying to kill her. It was self-defense. Whatever. But the guy that shoots flames, he is shown no mercy.

He and Ivy get into a tussle, and Ivy eventually attempts to hang him from a tree with a vine she’s controlling. This doesn’t work, so Ivy runs and falls in a mud pit with a bunch of poisonous frogs. She then uses one of the frogs to paralyze her attacker and intentionally rolls his paralyzed body face first into the mud so he drowns slowly! Who does that!? I know these two are villains, but damn. Just, damn. Paul Dini takes this to such a dark place. Then, Ivy celebrates by having sex with a tree while Harley waits in the rain by the car. I wish I was kidding about that last part, but you can enjoy it for yourself below. 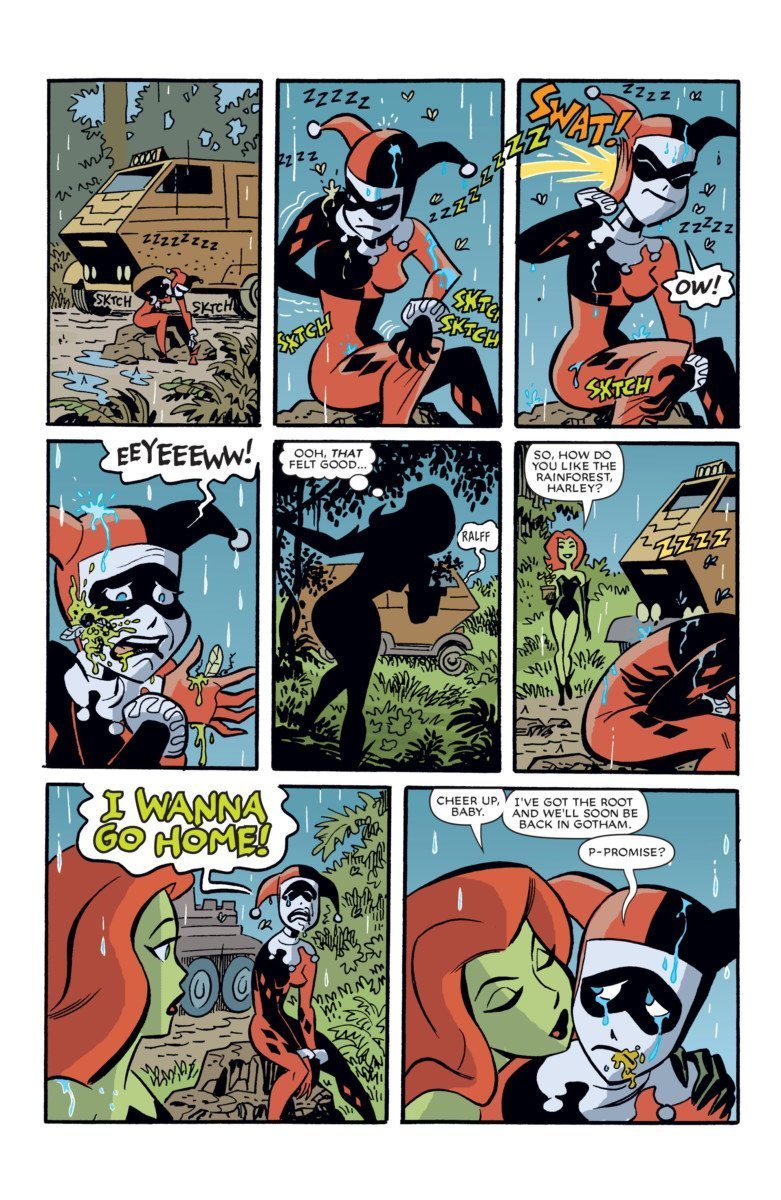 And with that, Harley and Ivy escape with the zombie plant and go on their happy way back to Gotham where Batman is waiting anxiously to pummel them. I really saw this week’s This Week in Comic Book History being a lot more lighthearted. I guess I dropped the ball there. Will next week be even more twisted? I hope not. Come back and find out!