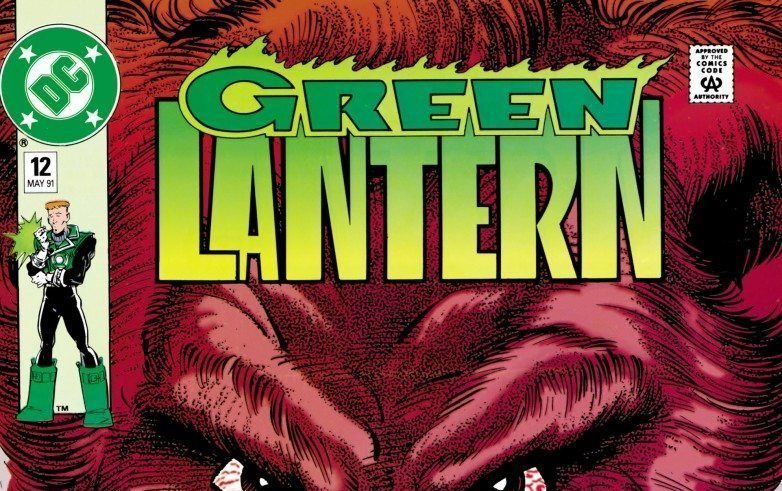 And we are back with another addition of This Week in Comic Book History! Unfortunately, we don’t really have any holidays to celebrate well after the actual date of the holiday like we have the last two weeks. I mean, we could celebrate Thomas Jefferson’s birthday, which was on April 13th, but we can do better than Thomas Jefferson related comics. That’s why this week we are looking at GREEN LANTERN #12. Released in April 1991, GREEN LANTERN #12 follows everyone’s favorite Green Lantern Guy Gardner and Gnort, an alien that looks like a dog with a mustache, as they try to escape a Qwardian cult who worship Sinestro by dressing up as him. Sometimes, when you hit the holy grail of fun and goofy comics, you just know. And this is one of those times everybody.

This particular issue has a lot of what the modern Green Lantern title stories often lack, particularly the most recent Green Lantern arc, and that’s the fact that the Green Lanterns are an INTERGALACTIC police force. So much of the main Green Lantern title is spent on Earth that it rarely seems that way. These heroes have entire sectors of space to protect and explore, but often are on Earth dealing with mundane problems. Of course, much of this has to do with how Hal Jordan is presented, since he is normally the main focus of the main Green Lantern title. That being said, every moment that the Green Lanterns aren’t exploring new worlds and meeting new aliens is a wasted opportunity. The Green Lantern premise has what very few other comic properties claim and that’s the ability to have countless space adventures and have these also make sense for who the characters represent. Sure, Superman can go to Apokolips and fight Darkseid for a while, but he’s always going to end up in Metropolis. The Green Lanterns have nowhere they should always end up. The entire universe should be their home. Luckily, Guy Gardner’s stories more often than not follow this premise. Especially here as he and Gnort go on a little road trip through space that, naturally, ends in disaster. 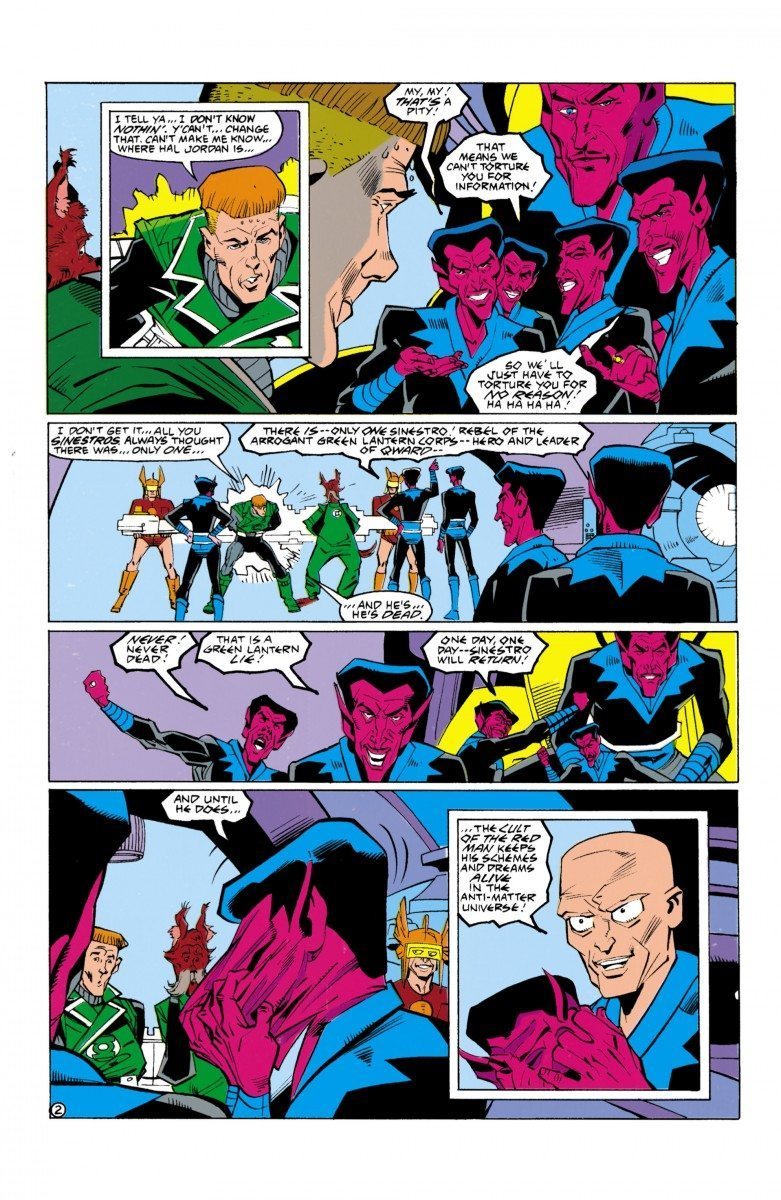 We open the story with Guy being tortured by the Qwardian cult who captured him last issue as they laugh hysterically in the background because torture is apparently hilarious where they’re from. Each one is dressed up exactly like Sinestro and worshiping a Giant Sinestro robot. They are dedicated to Sinestro in a way that is super creepy and brings up a lot of questions. Are they always dressed like that? How can they tell each other apart? Do they keep the costumes on during intimate times? Are they the Sinestro equivalents of furries? How is this the second This Week in Comic Book History article in three weeks where furries have come up? I just have so many questions about how this bizarre planet works and none of them are answered! I really just need a behind the scenes spin-off of a day in the life of a Qwardian Sinestro worshiper. They could call it… Qward of the Rings? Qwardians of the Galaxy? House of Qwards? Jurassic Qwark? Terrible puns of the week. Check. (Special shout out to the ComicsVerse team for helping with this week’s puns)

READ: Interested in where the Green Lantern is today? Check out our review of GREEN LANTERN #51!

Back in the actual story, the cult wants to know exactly where Hal Jordan is so they can stop him from recruiting more Green Lanterns. Oh, the Sinestro robot also breaths yellow fire because making anything fire breathing instantly makes it cooler. They begin to burn Guy alive, but he still refuses to reveal where Hal is. This is a great moment that really shows Guy’s defining character trait. He’s stubborn to a fault. His stubbornness gets him into trouble a lot (see the beginning of this paragraph) but it also differentiates him from a lot of other heroes. Sure, most wouldn’t give away the position of a fellow hero to a villain, but usually that’s out of some form of compassion or caring. Guy is just too stubborn to admit defeat by giving into torture and give away information. When Hal’s location is revealed, he doesn’t cry out for his friend who is in danger. Instead, he calls Gnort dog-breath. Guy’s the best sometimes. 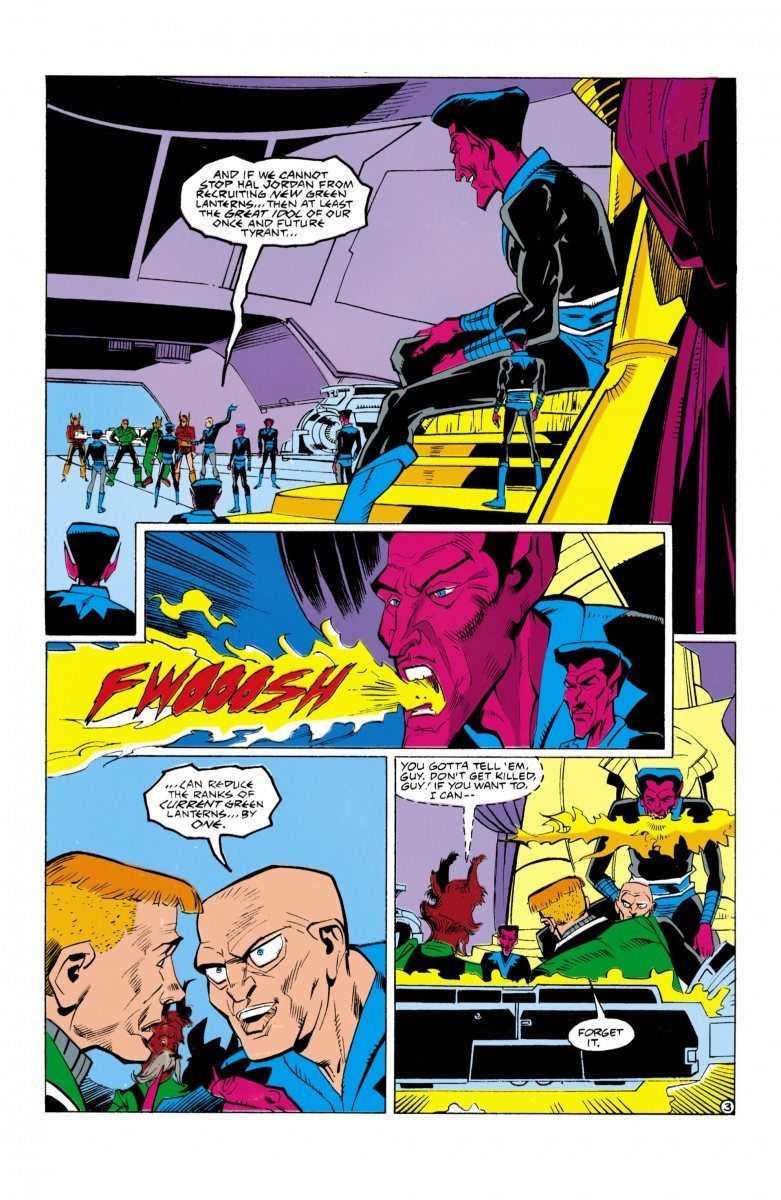 But Kenny, you may be asking yourself, how did Hal’s position get revealed if Guy is too stubborn to be tortured? That’s a great question reader. You see, Gnort is not good at being intimidated and tortured. The Qwardian’s bring out his uncle Gwewmann and threaten to slit his throat with lightening bolts. Slitting throats and burning people alive, man, this comic book gets really dark at certain points. Gnort quickly gives in and tells them exactly where Hal is. It’s a great contrast between how Gnort and Hal react to their situations. Gnort really grounds the scene in a much more relatable way. Very few of us would choose being burned alive over keeping a friends location safe, as much as we may pretend otherwise. Most of us though, would sacrifice a friend for the safety of a loved one if we were about to see them killed right in front of us. The dog alien is a much more relatable person than the actual human being in this story.

READ: Green Lantern’s also a member of the Justice League. That means you need to read our Justice League Essential Readings list!

With Gnort’s information in hand, the hunt for Hal Jordan begins. Meanwhile, Guy decides it’s finally time to escape. His plan ends up being a very convoluted, DC Comics lore heavy reason so I’ll try and streamline it because no one wants to get too far into DC Comics lore. The planet they are on runs on anti-oan energy, essentially the opposite of what the Green Lanterns’ rings run off of. So, every time Guy uses he ring he gets electrocuted. But, he deduces that, since the anti-oan energy is a man-made construct, his ring has more energy and it will be able to outlast it and allow him to break free. With that in mind, he electrocutes himself until his shackles break and he is able to escape. Imagine if I hadn’t streamlined that. We’d have to go into the history of the planet Oa, not to mention the Guardians of Oa, and the anti-matter universe and we’d never finish this article. The Green Lanterns have a complex and rich history, but it can be daunting if you’ve never read any of their stories before. 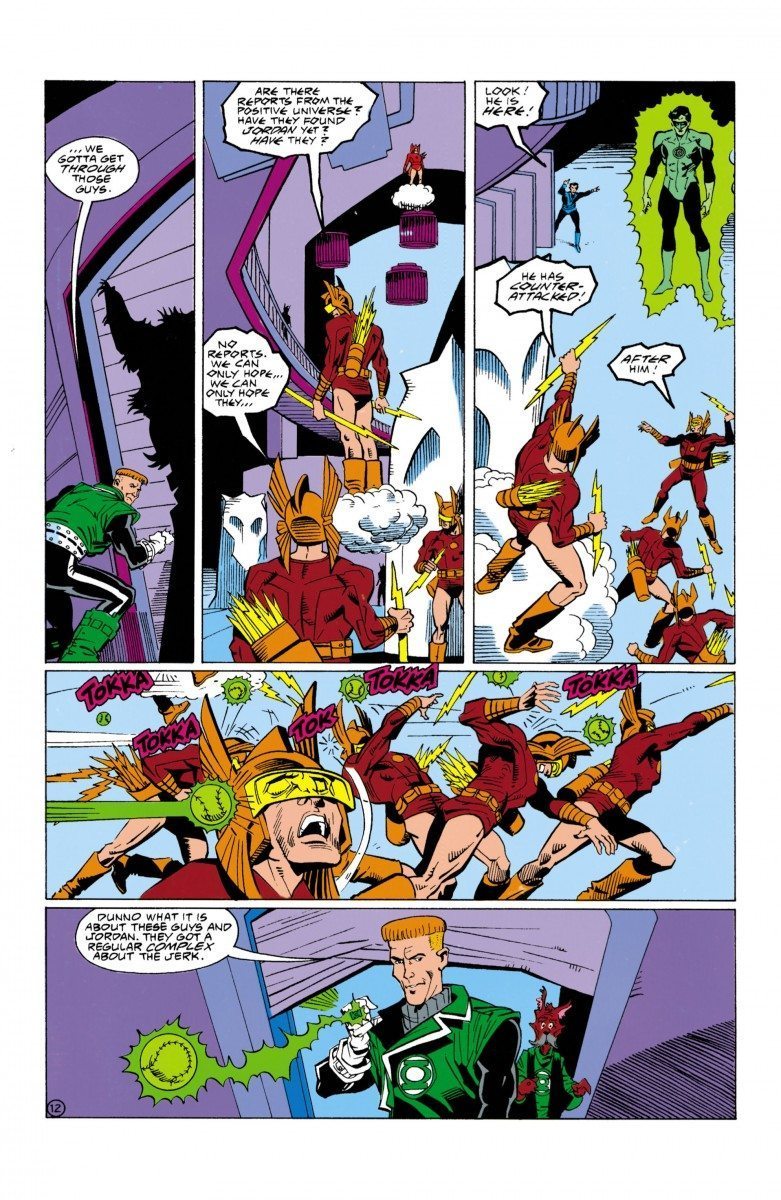 Although Guy’s escape plan works, it really lacks any form of subtlety. So naturally, he and Gnort are immediately swarmed by Qwardian soldiers who not only throw lightening bolts, but also fly around on clouds because comics. This whole planet is apparently either filled with Zeus cosplayers or Sinestro cosplayers. Honestly, it sounds like a fun place to visit for a weekend. A weekend in which you would never tell anyone about in shame, but a weekend nonetheless. Guy defeats them with such constructs as baseballs, a dog bone, and a rug. The Green Lantern ring gives you the ability to construct anything you can think of and that’s what Guy comes up with. I expected better. During the fight, they also destroy the Sinestro robot and burn the entire building down. Also, I’m pretty sure Gnort eats a guy? I don’t know, things just get completely out of hand during the final fight. You’ll have to judge for yourself below. 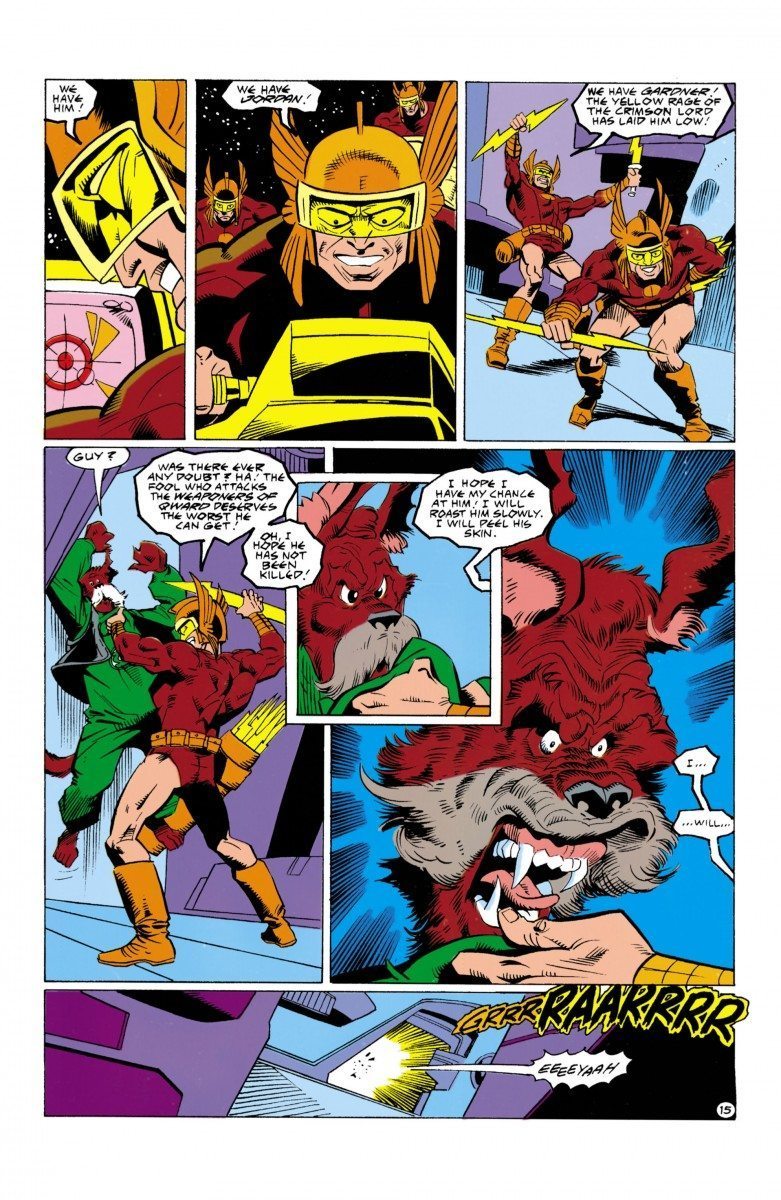 And with that, our heroes save the day through accidentally (or maybe intentionally?) burning everyone alive. Hero has a broad definition in this sense. On a lighter note, Gnort also gets told Guy will put a word in for him so he can become a Green Lantern! He deserves it. Gnort’s a good dog. And with that, we end another addition of This Week in Comic Book History! Tune in next week where we look at…I don’t know, I don’t plan that far ahead. Check out what I do decide to analyze next week anyway! Hopefully it has something that breaths fire. Let’s be honest, there will probably be something breathing fire.