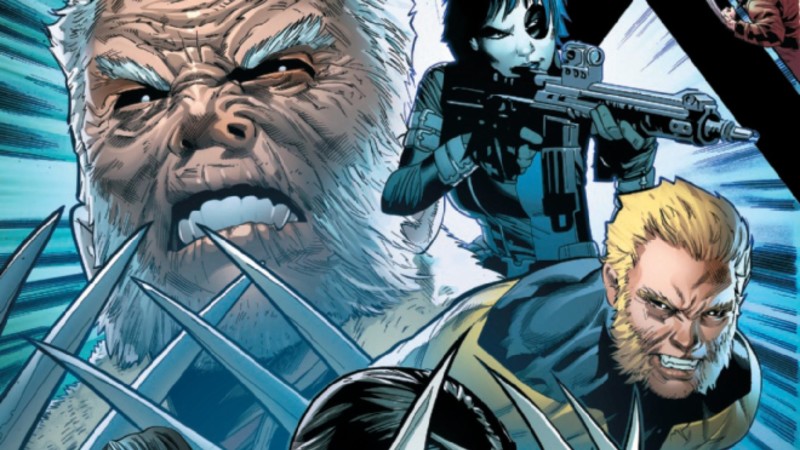 WEAPON X #1 is a thrilling first issue that finds the perfect balance between narrative and action. This is the next installment of Marvel’s ResurrXion line, taking a step away from the X-Men and focusing on the mutants who underwent experimentation at Weapon X itself. Writer Greg Pak does a wonderful job of setting up this series, while artists Greg Land and Frank D’Armata create beautiful pieces of artwork by flawlessly depicting the Pacific Northwest on the pages throughout this book.

WEAPON X #1 plays out much like an OLD MAN LOGAN comic. The beginning has Logan relaxing in the wilderness, where two lost hikers stroll by. Logan gives them directions, and it really is a sweet moment, as Logan finds tranquility in the idea that these are just kids who are simply lost. However, this quickly turns sour. The two hikers turn into metal killing machines with claws like Lady Deathstrike, and they nearly take out Logan. Luckily, Logan has the quick instinct to create a brutal decoy and barely escapes the clutches of these deadly assassins.

READ: Never read OLD MAN LOGAN? Here’s why you should!

The scene cuts to Weapon X, where it is shown that Lady Deathstrike is in fact captured and that the hunt for four other mutants (Logan, Sabretooth, Domino, and Warpath) is currently being executed. When the story returns to Logan’s narrative, it is shown that he has located Sabretooth as an attempt to help each other. Sabretooth explains how he came across a little girl who surprised him with an attack, just like the hikers from Logan’s scenario. Sabretooth is at first reluctant to assist Logan but is soon persuaded by Logan’s jarring and bold strategy.

I really enjoyed reading this comic. It might be because I’m such a fan of OLD MAN LOGAN, and WEAPON X #1 focuses heavily on Logan, but I also enjoyed other factors. Seeing killer robots who fight like Lady Deathstrike usually isn’t my cup of tea, but it works in this issue. Knowing that Logan has to rescue Yuriko (Lady Deathstrike) with the assistance of Sabretooth will create a great dynamic. Greg Pak does a great job with their dialogue, too. Though I initially thought it was very uncharacteristic of Logan to seek Sabretooth’s help so quickly, it makes sense because this is Old Man Logan. This is a man who has lived through the Wastelands: he doesn’t have time for bitter rivalries to get in his way of the greater good.

Honestly, the only thing I don’t fancy about WEAPON X #1 is in the Weapon X scene itself. Although Yuriko giving death threats while contained in her tube is chilling, the scientists around her are written immaturely and a bit basic. I would have liked more of a narrative here, instead of them getting ready to sit down to eat lunch. Obviously, this isn’t the biggest deal, but it’s one of those things that isn’t needed, as it takes away from the graveness of the scene.

READ: Have you heard about the controversy surrounding X-MEN GOLD #1?

But the art is spectacular. The stoic expression on Logan’s face in the beginning is so calming. But when the scene’s atmosphere flips, Greg Land makes the transition smooth and easy to follow. Even though killer robots can become a bit too outrageous and confusing, the fight scene flows in a way that seems natural. And really, seeing these killers go from human to robot is nearly uncanny, as Sabretooth points out later in the issue. Personally, it reminds me of guerrilla warfare, where civilians are strapped with bombs to catch an enemy by surprise. Frank D’Armata’s colors paint the scenes well, as the wilderness is portrayed magnificently from one scene to the next. His scenes containing water are particularly beautiful.

Overall, WEAPON X #1 is a grand first issue. Truth be told, this was one of the last ResurrXion books I was looking forward to, but now it’s my first. I’m so curious to see how these five mutants come and work together. Is Weapon X in a different location? Who is now funding it? Greg Pak has a lot of room to work with, and by having four of the five Weapon X experiments not on a team, he has the freedom to take the characters around the globe to discover the truth behind what’s going on.

Even if you’re not familiar with Weapon X or ResurrXion, give this issue a shot. It’s enjoyable to read and will help you ease into the evolving X-Men universe.