Once upon a time TEEN TITANS, an anime-infused cartoon, revived some of the most memorable characters and stories known to animated storytelling. Primarily based on Marv Wolfman and George Pérez’s 1980s run of THE NEW TEEN TITANS, the show introduced a whole generation to some of the most iconic themes and stories known to the comic book world. The TV series struck a unique balance between original content and adaptation. Characters were developed in a way that provided a distinct take on their personalities whilst simultaneously remaining in line with the themes and tone of the team. That being said, enough time has passed for us to look back and reflect on what it is that made this show great, and why we need another one like it. 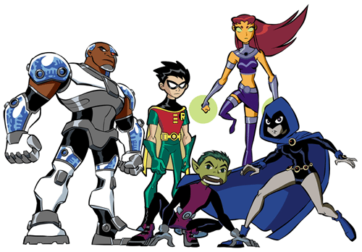 DC Animated series tend to have one common thread that helps them become successful; they don’t talk down to their audience. Whether we are discussing BATMAN: THE ANIMATED SERIES, JUSTICE LEAGUE UNLIMITED, or YOUNG JUSTICE, when the creators develop stories that deal with real problems in creative ways rather than dumb them down, people respond. Themes of friendship, loss, and humor are universal. Treating a ‘kids show’ like a kids show, where such difficulties are supposedly unheard of, is a gross disservice.

READ: Youth and Comics Part One- The Appeal of Young Heroes

Raven’s story best exemplifies how such matters are accomplished. We all struggle with how we express ourselves, what it is we should share with those around us, and the stigma we may face in doing so. Raven takes it a step further: her powers force her to keep her emotions in line lest she unleash complete anarchy. In the episode ‘Nevermore’ she makes a mistake; she loses control and ends up traumatizing the villain Dr. Light. In doing so, Raven feels frustration and regret in her actions. Beast Boy and Cyborg respond with their usual lack of tact, but when they come to apologize they get sucked into a mirror where different aspects of Raven’s repressed character are personified in the land of Nevermore. Here her emotions roam free, uninhibited by the restraints her powers impose and can express themselves fully. Ultimately, Beast Boy and Cyborg gained a little insight into Raven’s character and the struggles they did not realize she faced every day. Such examples are laced throughout the series: they explore emotional themes that resonate across generations and demographics. In doing so, the show treated their audience with a sense of respect, trusting them to understand the ideas laid out before them despite their age group.

For many, the measure of the villains is just as crucial as that of the heroes. TEEN TITANS brought forth numerous memorable foes. Slade was the first introduction to Deathstroke for many people and he truly embodied the sinister and manipulative nature of the character. However, in addition to having a well-executed villain, the series thoroughly explored how an enemy can impact the hero. Robin’s pursuit of Slade risks his relationships with his friends as well as his capabilities as a leader. This struggle to reconcile his thirst for justice whilst upholding his friendships is one of the definitive high points of the second season. Additionally, villains such as the members of H.I.V.E. Academy set forth a quirky yet still treacherous antithesis to the Teen Titans. Terra exemplified how good and evil can sometimes blur, lost in a sequence of tragedies and the consequences of circumstance. The show did a clever job of creating original villains as well and using them to shape our heroes or introduce them to a new class of conflict. Red X is a most memorable adversary. He embodies a distinct kind of villain, one who acts solely for himself rather than out of malicious intent. Foes such as Fixit forced Cyborg to cherish his humanity; this highlights a core aspect of the character. In the original run of THE NEW TEEN TITANS, Victor Stone consistently has the same struggles, viewing himself as inhuman for what he has become. In the comics, he found his humanity as a member of the team and as a role model to children. Introducing Fixit, a character who views his humanity as a systematic flaw, permitted Cyborg to be confronted with the same doubts in a manner that is unique to the show and accessible within the medium.

Trust in the Team

The greatest virtue the Teen Titans had was the importance of a team. The characters each posed their own unique struggles and strengths. Robin’s stubbornness, Raven’s emotions, Starfire’s naiveté, Cyborg’s humanity and Beast Boy’s exuberance all combined to create a supportive team to fight bad guys. As a team, they were brought to an equilibrium of sorts. They were able to work through their own difficulties in a manner that is reminiscent of growing up. However, they did so with the support and strength of friendship and working together. This is a quality I sorely miss in any team adaptation. Films like SUICIDE SQUAD would have been so much more entertaining if they elevated characters such as El Diablo, Katana, and Killer Croc. It would have been better if the members were on an equal playing field and were able to bring out the best in each other in a way that lines up with the motif of a team. TEEN TITANS had such strong characters and stories, but the element that made it a show worth watching is the dynamic within the unit. There was a deep sense of friendship, humor and hardship laced into a large scale adventure, which made the show memorable.

TEEN TITANS was entertaining all around: it brought forth worthy villains and seamless character development. THE NEW TEEN TITANS was a juggernaut in its time. It churned out classics such as ‘The Judas Contract’ and ‘The Terror of Trigon’ whilst exploring the interpersonal conflicts of a group of misfit teens. It is time we had them back, for they truly are as relevant now as they were back then. The JUSTICE LEAGUE VERSUS THE TEEN TITANS film released with a strong reception, one that warranted a sequel. Already, the studios have set forth an animated feature film adaption of “The Judas Contract,” a critical story within the Teen Titans lore. Additionally, YOUNG JUSTICE has been able to fulfill the void left by TEEN TITANS to a certain extent. The show provided a more universal feeling within the DC landscape and its focus on young heroes was reminiscent of the Teen Titans. With Robin, Beast Boy, Kid Flash, Speedy and Wonder Girl the show seemed to be on its way to building the Titans before it was unceremoniously canceled. However, with a confirmed third season of YOUNG JUSTICE coming to Netflix it may still be possible to see the rest of the team in some capacity.

A true adaptation has yet to be revived. There were plans for a live action TITANS show before it was scrapped, but for now the closest thing we have attained is TEEN TITANS GO. For all its divisiveness, TEEN TITANS GO is not the kind of show that intends to be taken seriously. Although the cast remains largely intact, it neither fulfills nor follows the criteria TEEN TITANS set forth. If anything, the strength of TEEN TITANS GO lies in its comedic characteristic; its ability to make fun of itself for everything it is not, for it does not try to be the original. The intent behind TEEN TITANS GO was not to succeed the TEEN TITANS. Yet the show was so influential, we cannot help but demand a successor that does. It’s safe to say something might be in the works. For all of the series we do not have, it is important to note what we do have. We have an animated feature, a YOUNG JUSTICE revival on the horizon, a scrapped TITANS project. All of this illustrates that there are stories to tell, and those in charge are at the very least thinking about them. I for one simply hope someone recognizes the potential this team has to offer and showcases some of the high points of the animated series.